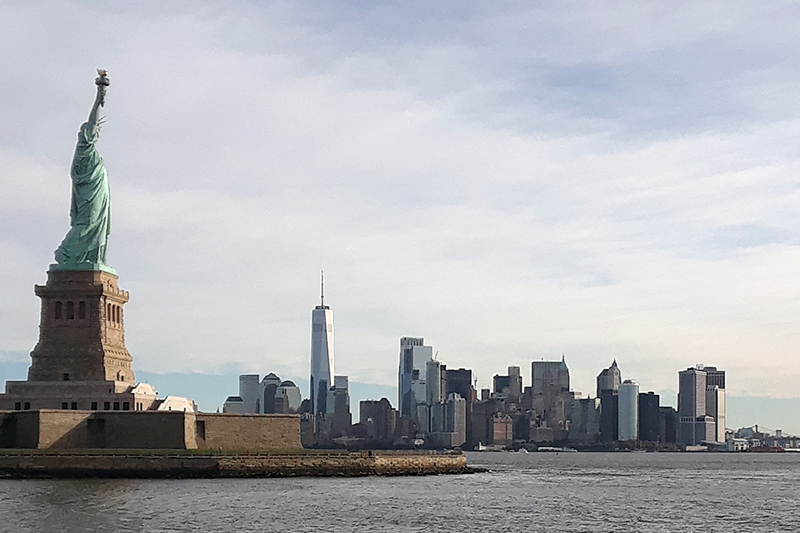 [All photographs by John Hill, unless noted otherwise]

Twelve years I've lived in New York City and Wednesday morning was my first visit to Liberty Island, home to the most famous statue in the world. I didn't go to walk up the 350-plus steps to the crown of the Statue of Liberty though. I was there for a hard hat tour of the Statue of Liberty Museum. Designed by FXCollaborative, with exhibitions by ESI Design, the building is expected to open in May 2019. 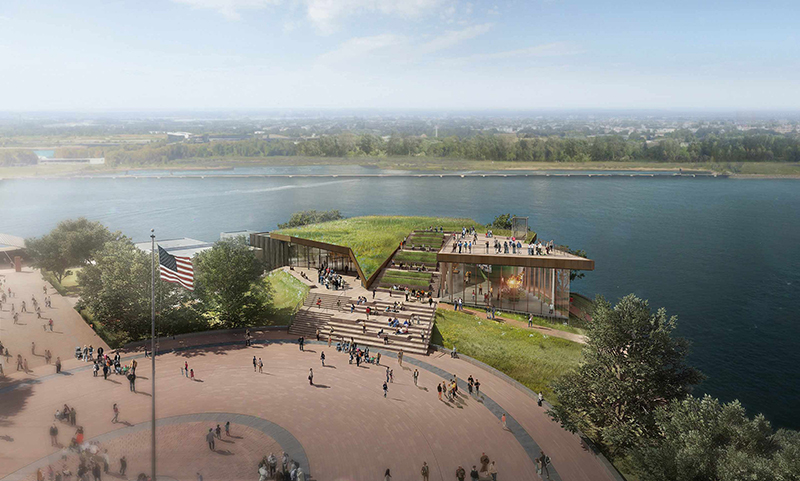 [Rendering of Statue of Liberty Museum by FXCollaborative]

The current museum is housed in the base of the Statue of Liberty at the eastern end of the island. This location means that many people don't visit the museum, since thousands more people take a ferry to the island than get inside the statue's base. The new freestanding museum, located next to the existing Flagpole Plaza on the western end of the island, will enable more people to visit the museum and it should alleviate congestion on the island. Its galleries will have three main parts (Immersive Theater, Engagement Gallery, and Inspiration Gallery) to tell the story of the Statue of Liberty, but I'm guessing most people who head inside will do so to see the original torch (visible in the rendering above); it was replaced in the 1980s when the statue was restored for its centennial. 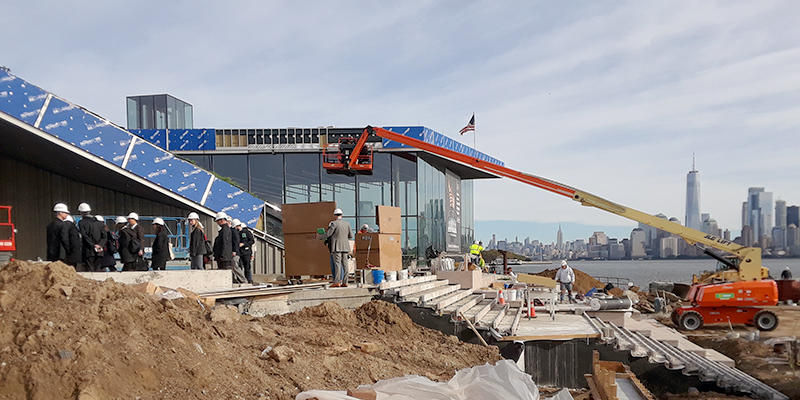 The one-story building – elevated for post-Sandy FEMA requirements – is basically an irregular trapezoid that is cut at an angle by exterior steps that span from the plaza to the roof of the museum. Halfway up the granite steps is a walkway that leads to the museum entrance. An accessible route consists of an exterior ramp to the entrance (the vantage point of the photo above) and an elevator accessed from an exterior walkway for going up to the roof. 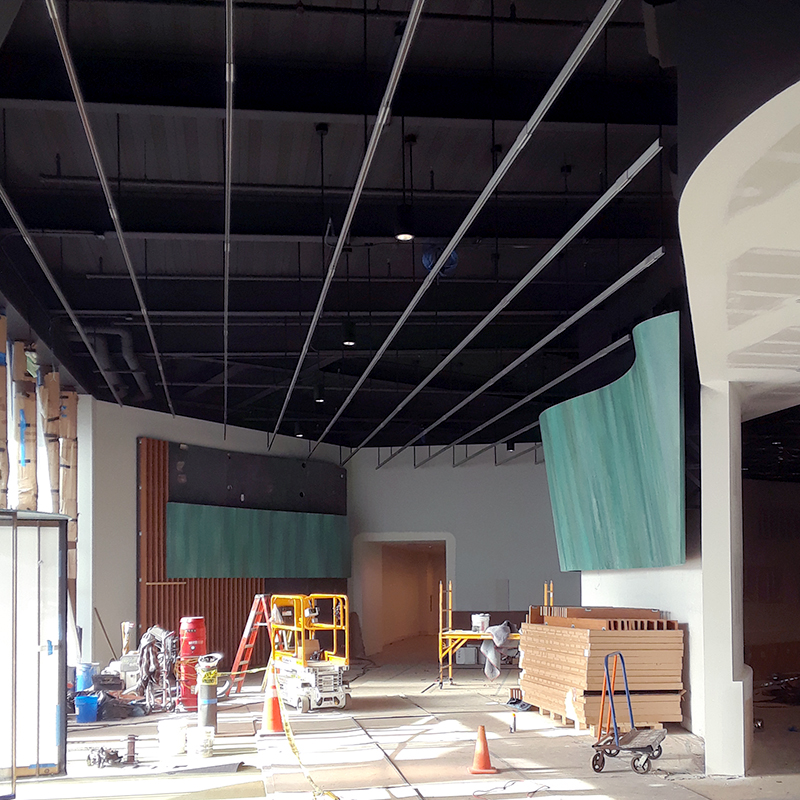 While it was easy to make the leap from construction site to completed building in my mind in regards to the building's exterior, the same was a bit trickier inside, where tools were much more prevalent than displays, which were basically non-existent. Regardless, the flow of the fairly open interior and three-part exhibition spaces were easy to grasp, starting with the entrance and its patina-green donor walls (above). From there, visitors follow undulating walls to watch projections of short films in the Immersive Theater, then find themselves at an exhibit of artifacts before ending up at the torch. ESI's design will tell the history of the statue but also of the idea of liberty, bringing it to the present through an interactive gallery beneath the exterior steps, where visitors can snap selfies and merge them with selected images that say "liberty" to them. The exhibits' success will have to wait until May, but suffice to say the museum is aiming to do a heck of a lot in its small, 26,000-sf footprint. 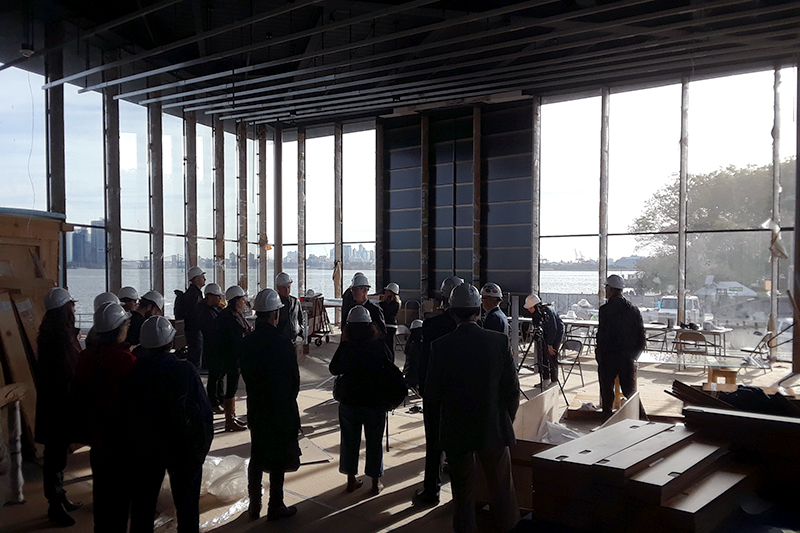 The museum's irregular footprint makes a bit more sense when considered relative to the building's immediate site and distant views. The plan contorts itself into its corner of the island and then opens itself to the east and north toward views of the Statue of Liberty, Lower Manhattan, and Ellis Island. Inside the museum, both views will be taken in from the room housing the original torch. This is partially grasped in the above photo, which is a bit misleading since the opaque panels are temporary (there to allow the torch to be brought into the museum) and will be glazed once the torch is in place. 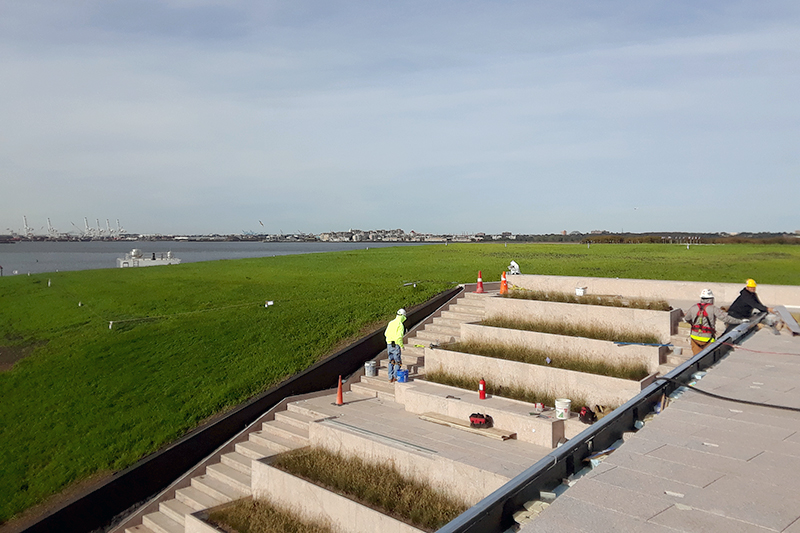 Back outside, the roof of the museum is split into three: the steps in the middle; grass to the south, with views toward New Jersey (photo above); and a paved surface on the north, with it's panoramic views from the Statue of Liberty to Lower Manhattan and Ellis Island (photos below). 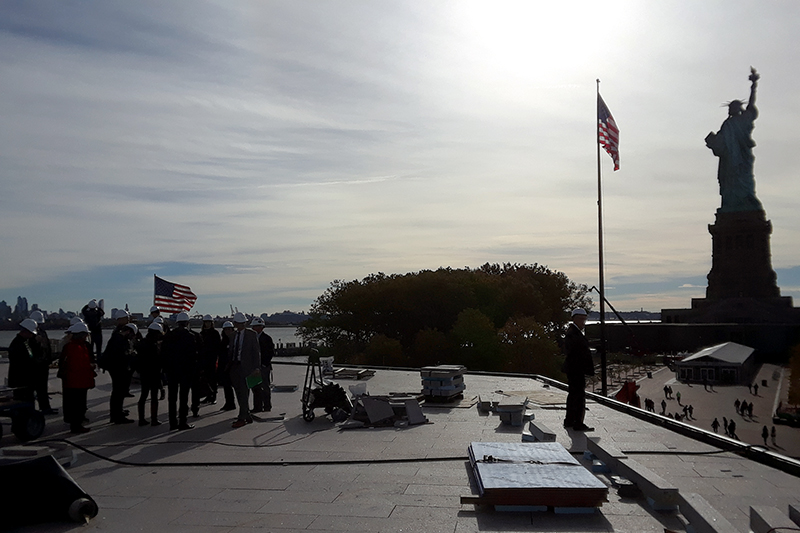 The panoramic views from the roof would lead us to believe the museum has been designed with a prescriptive architectural promenade, but routes through the building are loose and it's very likely that some visitors will head up to the roof and skip the interior exhibits altogether. Such is liberty today: the freedom to move about the island and museum after going through airport-style security and riding a crowded boat to get there. 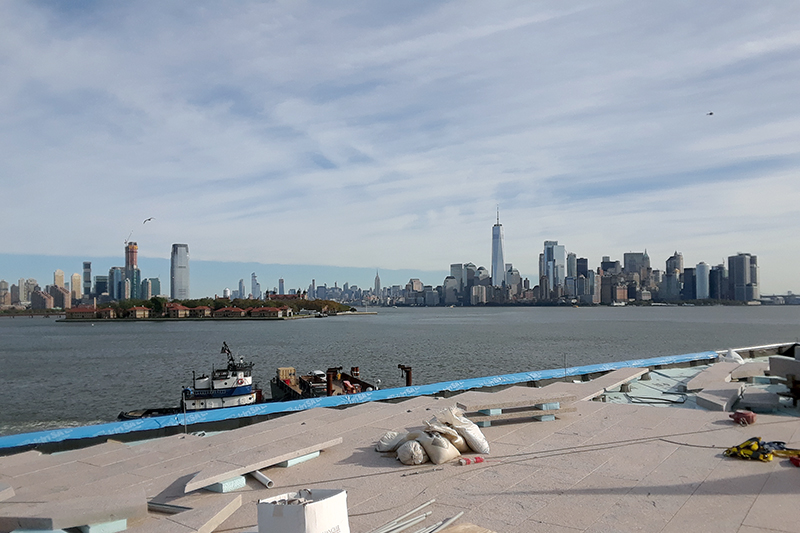