Letters to the Leaders of China: Kongjian Yu and the Future of the Chinese City edited by Terreform
UR (Urban Research), 2018
Paperback, 300 pages 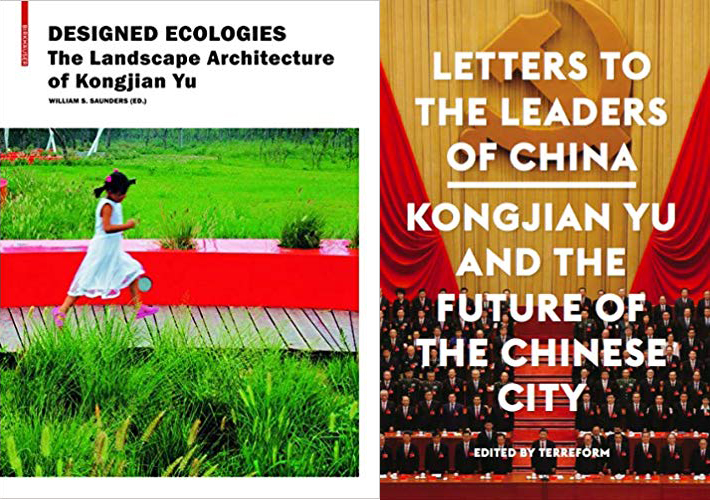 One of the most memorable crits I attended during the World Architecture Festival a couple weeks ago was Turenscape's presentation of Puyangjiang River Corridor, which involved the demolition of the channelized river's concrete embankments and subsequent "softening and remediating" of the 10-mile-long river corridor. Even though the concrete-lined river sprouted industrial uses along its banks, Turenscape convinced the city's mayor to remove the concrete and the industry in order to bring the river back to life. How, the jury asked the designer from Turenscape, did they manage to do that? "Six months of drinking with the mayor!" It seemed like a joke and elicited laughter from the jury and audience, but it was true. And it captured something unique about Turenscape beyond its distinctive, influential "sponge city" landscapes full of winding colorful walkways and pavilions: founder Kongjian Yu and his other partners engage with mayors to transform sizable chunks of urban China into productive cultural landscapes.

Yu's political engagement is the theme of Letters to the Leaders of China, the eighth book from Terreform's UR Books. It collects almost ten of his letters to mayors and includes excerpts from his books, essays, and lectures; much of his words here have been translated into English for the first time. Following them are essays by such academics as Thomas J. Campanella, Zhongjie Lin, and Peter G. Rowe. Concluding the book are an interview with Ai Weiwei and maps that show the remarkable extent of Turenscape's projects for Chinese cities -- 48 in Qinhuangdao alone (!), the city where the famous Red Ribbon Park is located. I started with the Ai Weiwei interview. Although they clearly know each other and appreciate each other's work, the informal interview the artist and landscape architect probing each other to learn about the other person and provoke him about certain questionable traits. The candor and conversational tone make it a great start to the core features of Yu's career, from his agricultural upbringing and training at Harvard University, to his teaching at Peking University and work at Turenscape, which he founded in 1988 and has seen expand to hundreds of employees in three offices.

The main argument that permeates the interview as well as his letters to Chinese mayors is "little feet" versus "big feet" values. The first refers to the tradition no longer practiced of binding the feet of girls in the name of beauty, while the second refers to the strong women that work the land but are not seen as traditional beauties. Yu extends the analogy to landscape design and inverts the two, finding value in the productive over formal beauty. In turn, even though his landscapes are punctuated by formally striking features like the red ribbon (visible on the cover of the Birkhäuser book as well as via the link above), they address a number of functions: industrial remediation, cleaning water, habitat restoration, growing crops, etc. By integrating productive landscapes into urban situations (many Turenscape parks are located alongside the cookie cutter housing developments outsiders see as synonymous with Chinese urbanism), Yu and his team remind city dwellers of China's agricultural roots and reveal how rice paddies, for instance, can co-exist with housing, universities, and other urban uses.

Letters to the Leaders of China has some photographs, but they are all monochrome and serve to elucidate points in the writings rather than to illustrate Turenscape's colorful projects. A more traditional full-color monograph, though a fairly academic one, was put out by Birkhäuser back in 2012. The book alternates documentation of built and unbuilt Turenscape projects with scholarly essays, many of the latter coming from professors at Yu's Cambridge alma mater. The maps at the back of Letters illustrate the country-wide ambition of Turenscape, something that comes across more explicitly in Designed Ecologies. In addition to projects like the Red Ribbon Park, the monograph includes large-scale planning and research projects for Beijing and all of China. With color-coded maps reminiscent of the great Ian McHarg, these large-scale projects convey how Yu has brought ideas from his education in the United States to bear on his home country, in turn influencing the field of landscape architecture well beyond China.