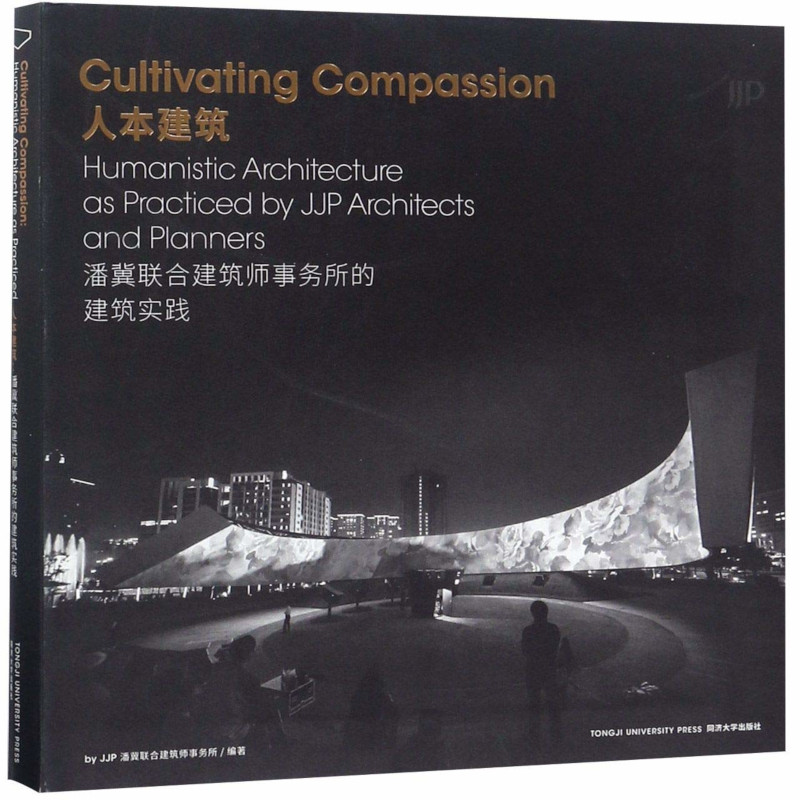 
This book is a monograph of J.J. Pan and Partners. Mr. Joshua Pan, one of the few western educated Taiwanese elite architects, returned to Taiwan from the U.S. in 1976 and started J.J. Pan and Partner. Their success is originated from their maturity and confidence on their professionalism, sense of identity towards the local culture and a strong sense of social responsibility. The basic belief behind Mr. Pan’s pursuit of excellence falls on his value of harmony with nature, proper use of technologies and materials, and people–orientation. These principles not only guided JJP Architects over the past four decades but will continue to lead JJP’s future generations despite various challenges.


Cultivating Compassion is the fourth monograph on the firm of Taiwanese architect J.J. Pan, but it is the first retrospective one, covering four decades of JJP Architects' output rather than just the previous ten years, as was done in the others. Before encountering the first projects bearing his name in the pages of Cultivating Compassion, we learn about J.J Pan's architectural education, which started in Taiwan but then moved to the United States for degrees from Rice University and Columbia University; the latter's focus on urban design prepared him for the large-scale projects he would eventually tackle after returning to Taiwan. Before moving back to Taiwan with his wife in 1976, J.J. Pan worked for a trio of firms in New York. A promising early project, one he designed while employed at Davis Brody and Associates, was SUNY Buffalo's Joseph P. Ellicott Complex. His design, a modern interpretation of a medieval European city, broke down the scale of the large buildings and eventually landed on the cover of Progressive Architecture. The design prefigures the capable handling of massing visible in the large projects he would design in Taiwan.

Yet if J.J. Pan is known to people outside of Taiwan it is for a small project, not a large one: the Ring of Celestial Bliss. One of many projects the firm has designed for Delta Electronics, the project was the recipient of a 2015 A+ Award from Architizer and has therefore been seen by an international audience. Appropriately, the temporary structure graces the book's cover. Inside it is documented, like other projects in the book, with finished photographs, construction photos, drawings, and diagrams that clearly convey the most important design features; in the case of the Ring of Celestial Bliss, the diagrams focus on the temporary structure's cradle-to-cradle design. It and the couple-dozen other projects are presented in three chapters (Vision, Social Impact, and Sustainability), each of which is prefaced by a "Discourse" or "Dialogue": a long essay and interviews that reflect upon the work of J.J. Pan Architects and Planners -- and look forward to the firm's lasting future. 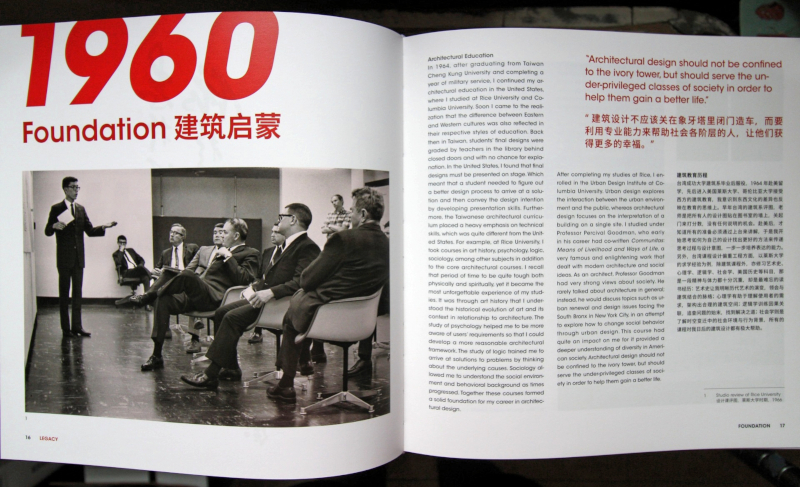 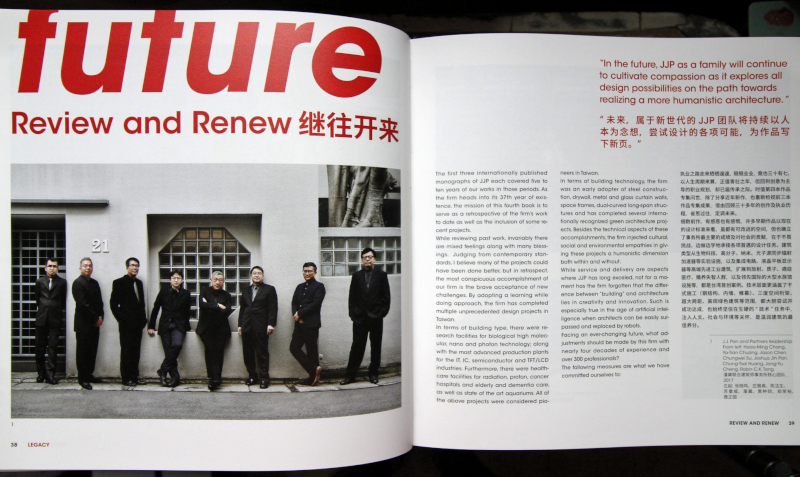 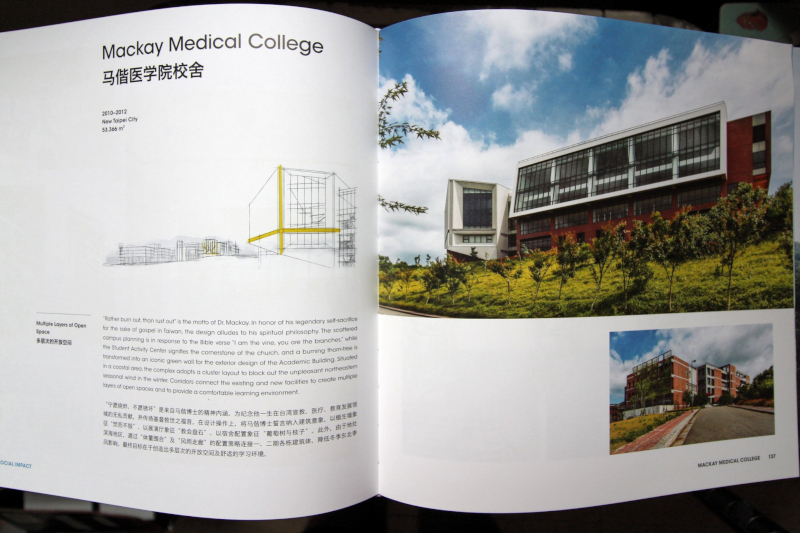 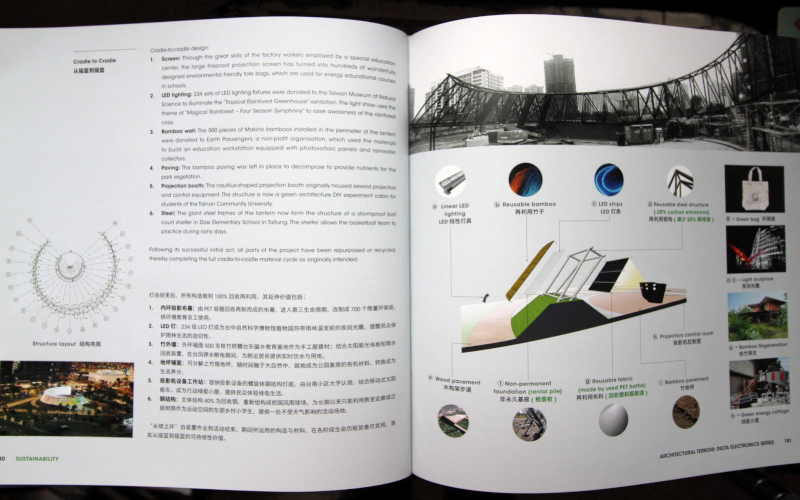 
Joshua J. Pan received his Master of Science degree in Architecture/Urban Design from Columbia University. He worked with firms such as Philip Johnson; Davis, Brody & Associates; and Collins Uhl Hoisington Anderson in the U.S. for nearly 10 years before returning to Taiwan in 1976. Founded in 1981, J. J. Pan and Partners has now grown into a multi-disciplinary group with offices in Taipei, Shanghai, Xiamen and Beijing.