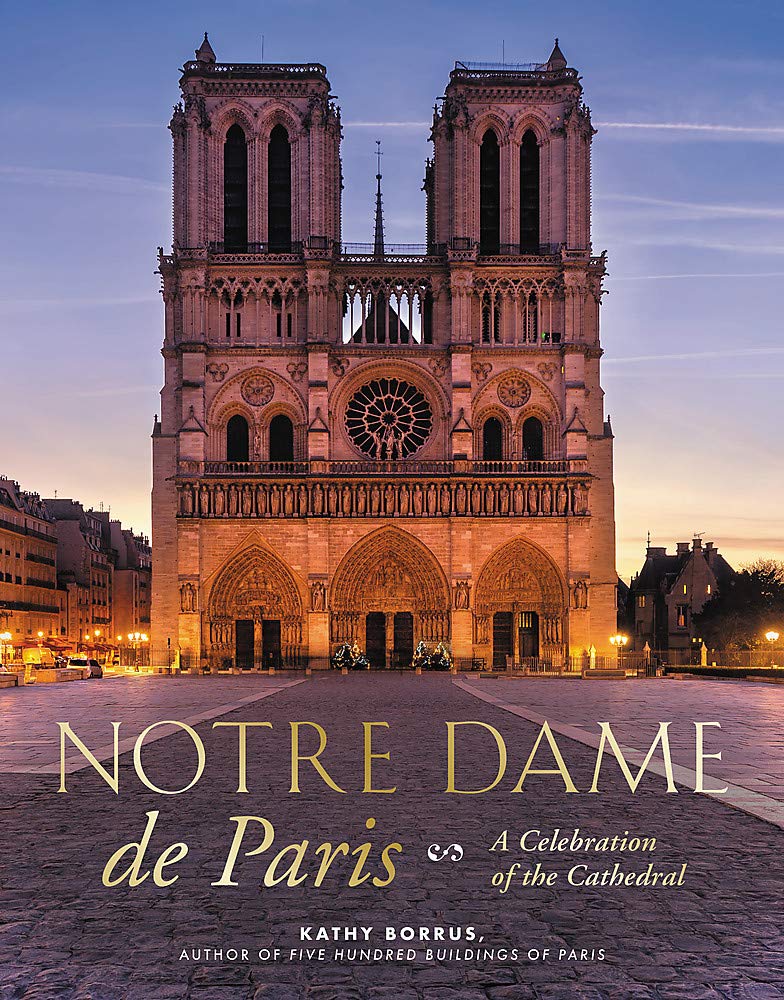 
On April 15, 2019, the world looked on in horror as the Notre Dame Cathedral was nearly destroyed in a devastating fire. Notre Dame de Paris: A Celebration of the Cathedral offers a fascinating look back at nearly nine centuries of this landmark building that has stood as silent witness to some of the most important events in human history.

A marvel of Gothic architecture, the cornerstone of Notre Dame Cathedral was laid in 1163, and construction was completed in 1345. For almost nine centuries it has served as a house of worship and refuge-a stalwart soldier that has survived wars and revolutions, hosted royal weddings, coronations, and funerals, and inspired Victor Hugo’s literary classic The Hunchback of Notre Dame. With the cathedral wounded but still standing, the world now watches as the rebuilding process gets underway. Notre Dame de Paris: A Celebration of the Cathedral chronicles the history of this landmark building, from its impressive architecture and collection of priceless artifacts to its presence during major world historical events. Through gorgeous, striking, and sometimes rarely seen archival photographs, Notre Dame de Paris: A Celebration of the Cathedral reminds us all why this building has become an unofficial wonder of the world, lodged in the hearts and minds of people around the globe.


As I type this, the tragedy that many people around the world are focused on is the tidal surge putting much of Venice under about six feet of water and closing Piazza San Marco. When the water subsides and cleaning up takes place, the attention of detached online onlookers will venture somewhere else; such is the news cycle in our connected age. Many tragedies or disasters come to the fore again on anniversaries, but I was surprised to be awoken from my Notre Dame slumber — it's been months since I thought about the fire that tore through its attic in April or the schemes aimed at rebuilding it — last week, when "the army general overseeing the reconstruction of Notre Dame cathedral in Paris [...] said the building's chief architect should 'shut his mouth'." The very public argument was over the style of the new spire: General Georgelin and French President Emmanuel Macron, who mandated completion of the rebuilding in just five years, believe the spire should be contemporary, but architect Philippe Villeneuve wants a replica of what burned down.

The squabble takes me back to the days after the fire, when similar debates raged online — especially some wacky schemes posted on Twitter — and lots of architectural news, myself included, clarified that the attic and spire were not original to the cathedral, which was started in the 12th century and finished two centuries later; they were designed by Viollet-le-Duc in the 1800s. That news drew attention to the fact the Notre Dame that so many people loved was a collage of constructions, reconstructions, repairs, and interventions over time. There is no original Notre Dame for people to be attached to and to rebuild from. I'm not arguing for a contemporary Viollet-le-Duc (designing something new, like he did) over a reconstructed Viollet-le-Duc (rebuilding his spire), but the patchwork character of the building is just one thing that comes to the fore in Kathy Borrus's short "celebration of the cathedral." The chapter devoted to the building as well as the one on its history (the others look at the building's treasures, legacy, fire, and future) describe, among other things, when different parts of the building were first constructed and then later repaired or modified.

Those chapters makes Notre Dame de Paris handy for architects, but the book is about much more than architecture. Borrus touches on historical events that involved the cathedral to greater or lesser degrees (Philippe Petit's tightrope walk between the bell towers in 1971 being one of them), the many treasures housed within the building, and the church as a subject in art, from Victor Hugo's The Hunchback of Notre Dame to, surprisingly, Sid Vicious and Nancy Spungen (as played by Gary Oldman and Chloe Webb) posing in front of the bell towers. The book wraps up with those gut-wrenching images of the fire and its hollowed-out interior, but Borrus ends with some optimism: "Notre Dame has been safeguarded through times of war and devastation...So too shall it survive this latest chapter full of fire and destruction." Although its survival has brought many people together, the form Notre Dame will take has, like many things these days, also divided them. 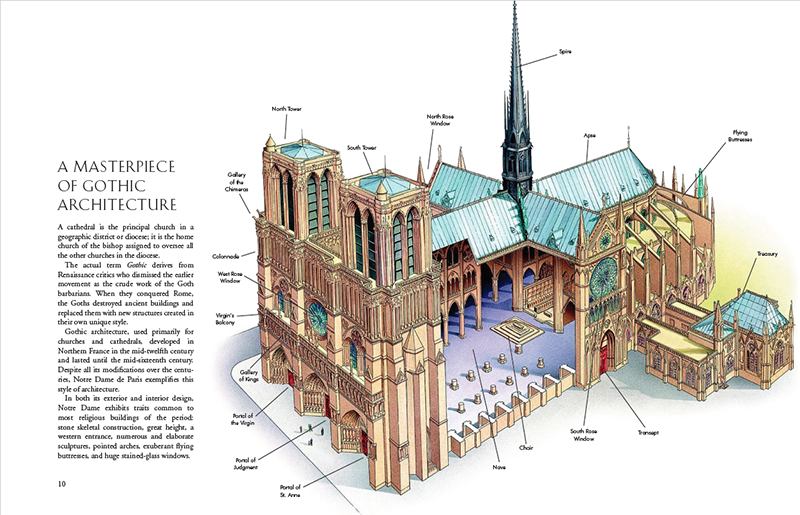 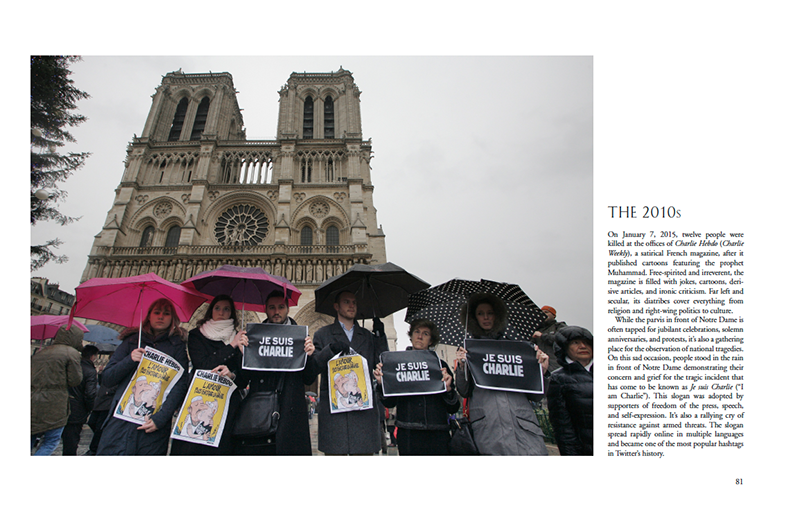 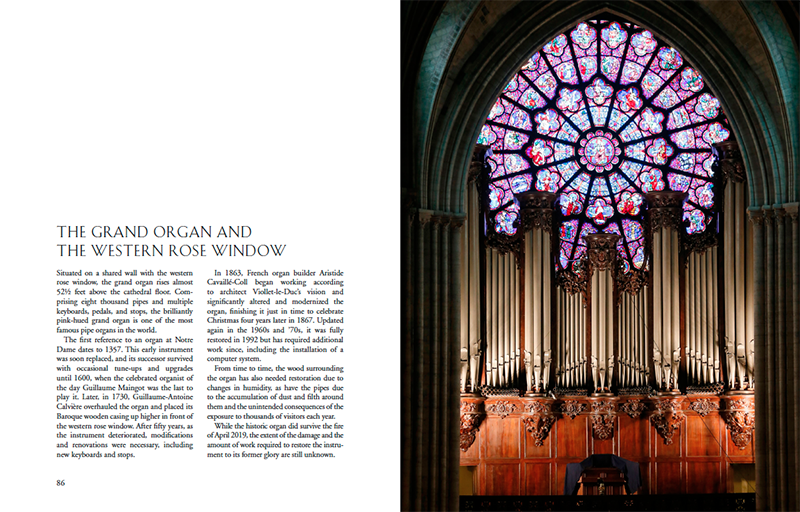 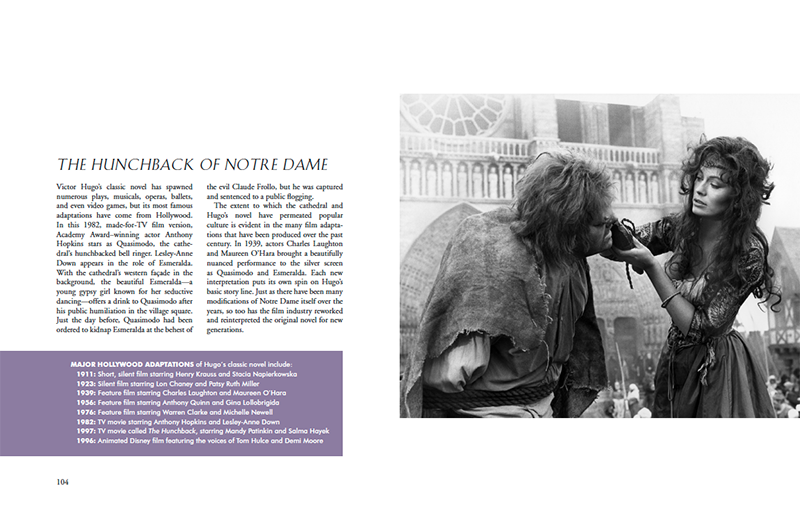