The Fourth Regional Plan: Making the Region Work for All of Us
Regional Plan Association, August 2019 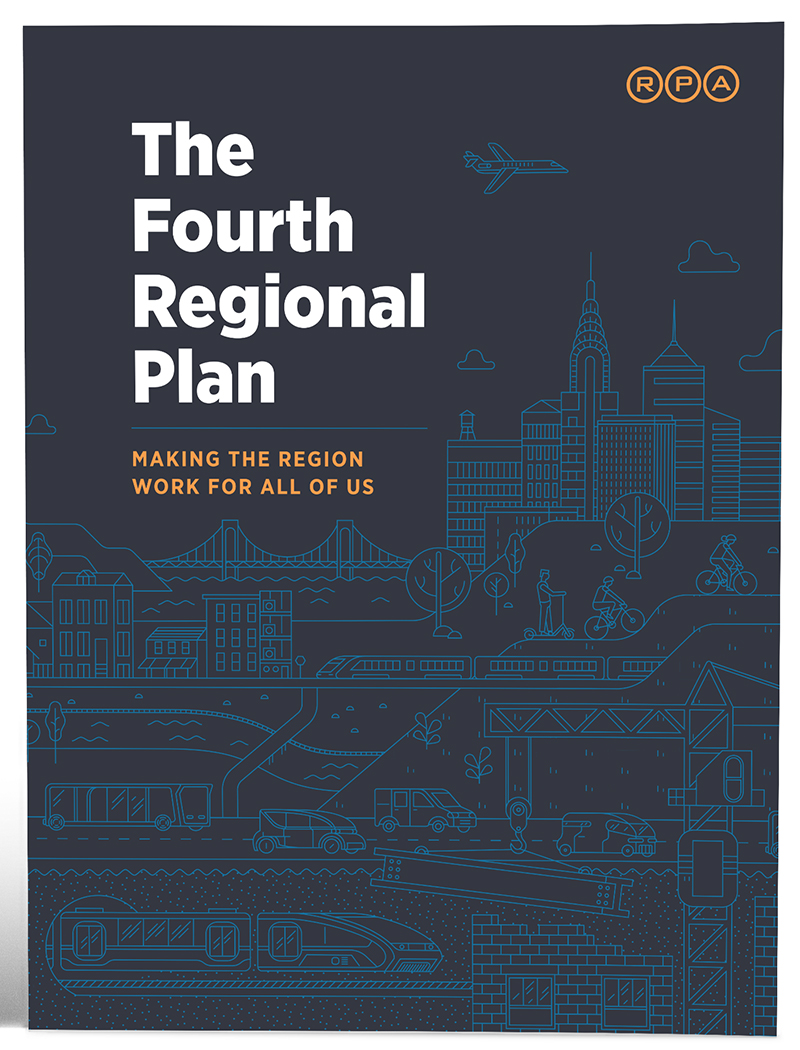 The plan, originally released as a website in late 2017, has now been published as a beautifully designed book, an enduring point of reference for students, planners, community leaders, advocates, government officials, and armchair urbanists.


The first regional plan produced by the Regional Plan Association (RPA), Regional Plan of New York and Its Environs, was released in 1929, on the cusp of the Great Depression. The Second Regional Plan followed in 1968 at a time of great social change in the United States and in other parts of the world, while the Third Regional Plan came in 1996, a year that eludes a similar historical marker. Last year saw the print publication of The Fourth Regional Plan, though it was actually published two years earlier in digital format. This present plan comes at a time of dramatic crises, most notably climate change and economic inequality, with global and local repercussions.

The Fourth Regional Plan also comes just over 20 years before its predecessor, which was created about 30 years after the second plan, which was released 40 years after the first. At this rate, the next RPA plan should be completed before the end of the new decade we just entered. Although that is unlikely (the impact of the current plan needs time to observe and determine), the gradually compressing timeframe between plans does signal accelerated change in New York City and the surrounding region. And with the local and state governments focused on their respective jurisdictions — and with New York City lacking any comprehensive planning — it's up to the RPA to address issues of the wider metropolitan and regional areas (the extents visible in the aerial map in the first spread below), at least from a planning perspective.

So what does the fourth RPA plan propose? As published, the planning ideas fall into four categories: fixing institutions that are failing us, creating a dynamic transportation network, rising to the challenge of climate change, and making the region affordable for everyone. The last three are primarily physical while the first addresses the mechanisms that need to work better in order for the other parts to actually happen. So politics precedes planning in the ordering of the book, with each physical aspect of the plan addressing at least one aspect of the politics: who's going to pay for it.

Each of three sections (transportation, climate change, affordability) has plenty of practical points that are being carried out already or have wide public support and therefore have a good chance of moving forward given the right leadership. There's nothing earth-shattering or controversial in the plan (an item such as "determine the costs and benefits of a regional surge barrier" actually displays some reticence in the RPA taking a potentially unpopular position on either side of the debate), but I would have loved to see more acknowledgment of the overlap between these three main categories. Right now that overlap is most explicit in the "Places" chapter at the back of the book, where an aerial renderings illustrate how the pertinent parts of the plan interact — at least in that God's eye view favored by planners. I think a deeper acknowledgment  of the interlacing of transportation, environment, and society would have led to planning ideas less partitioned and more integrated. After all, climate change is a social problem as well as an environmental one, and solutions for transportation can also address the crisis of affordable housing.

Spreads (from PDF of Executive Summary): 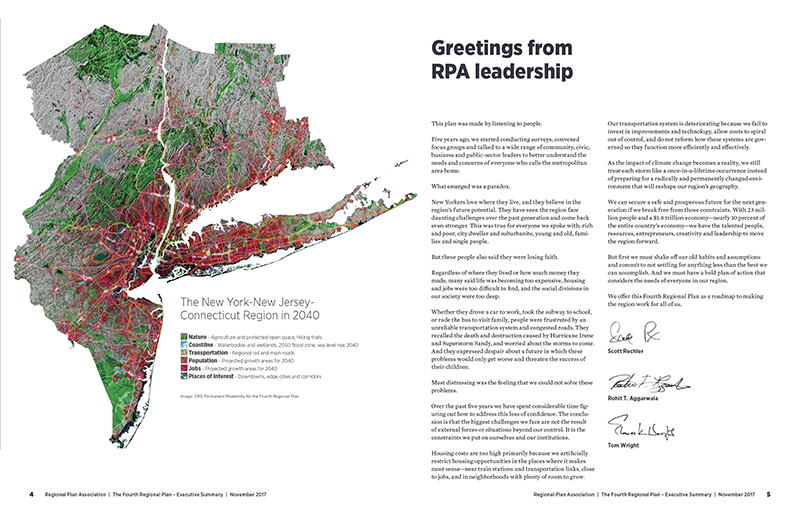 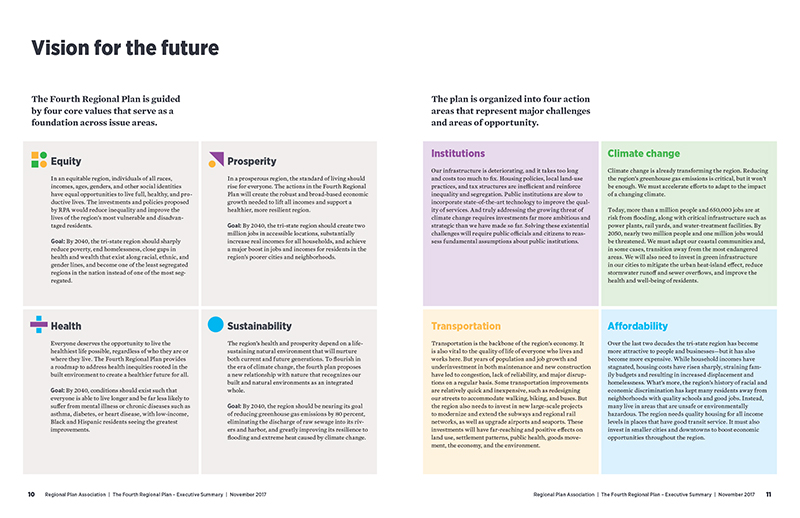 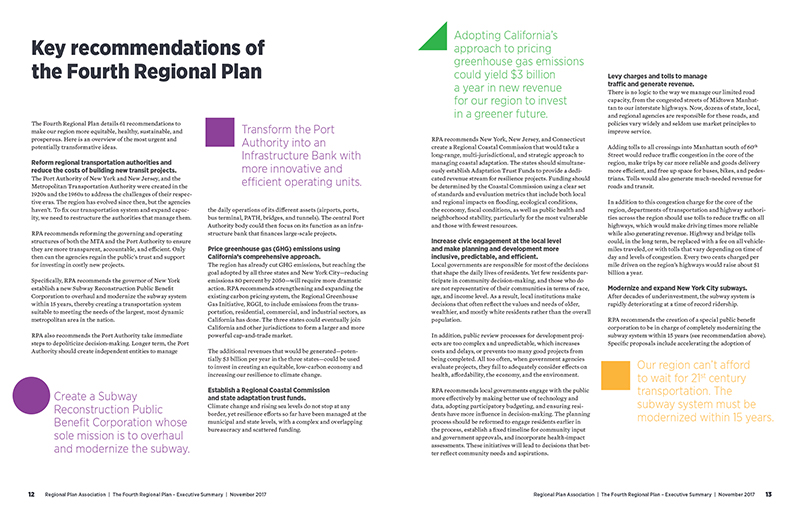 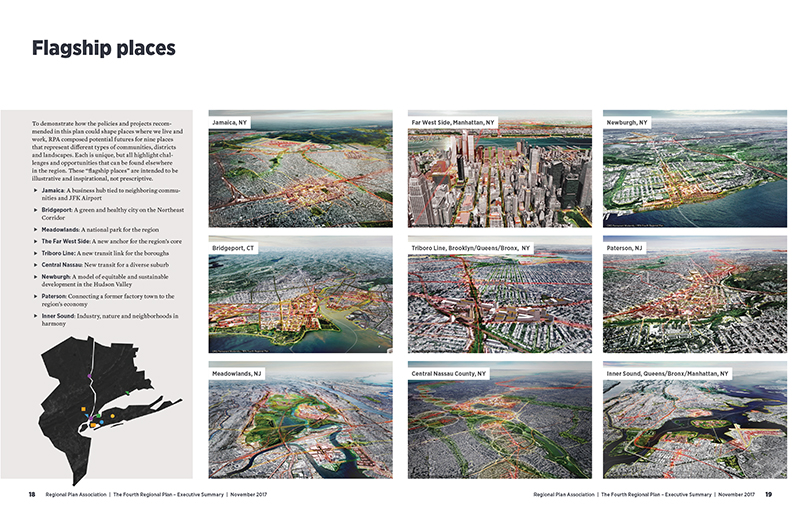 
The Regional Plan Association (RPA) is America’s most distinguished urban research and advocacy organization. RPA works to improve the prosperity, infrastructure, sustainability and quality of life of the New York-New Jersey-Connecticut metropolitan region.