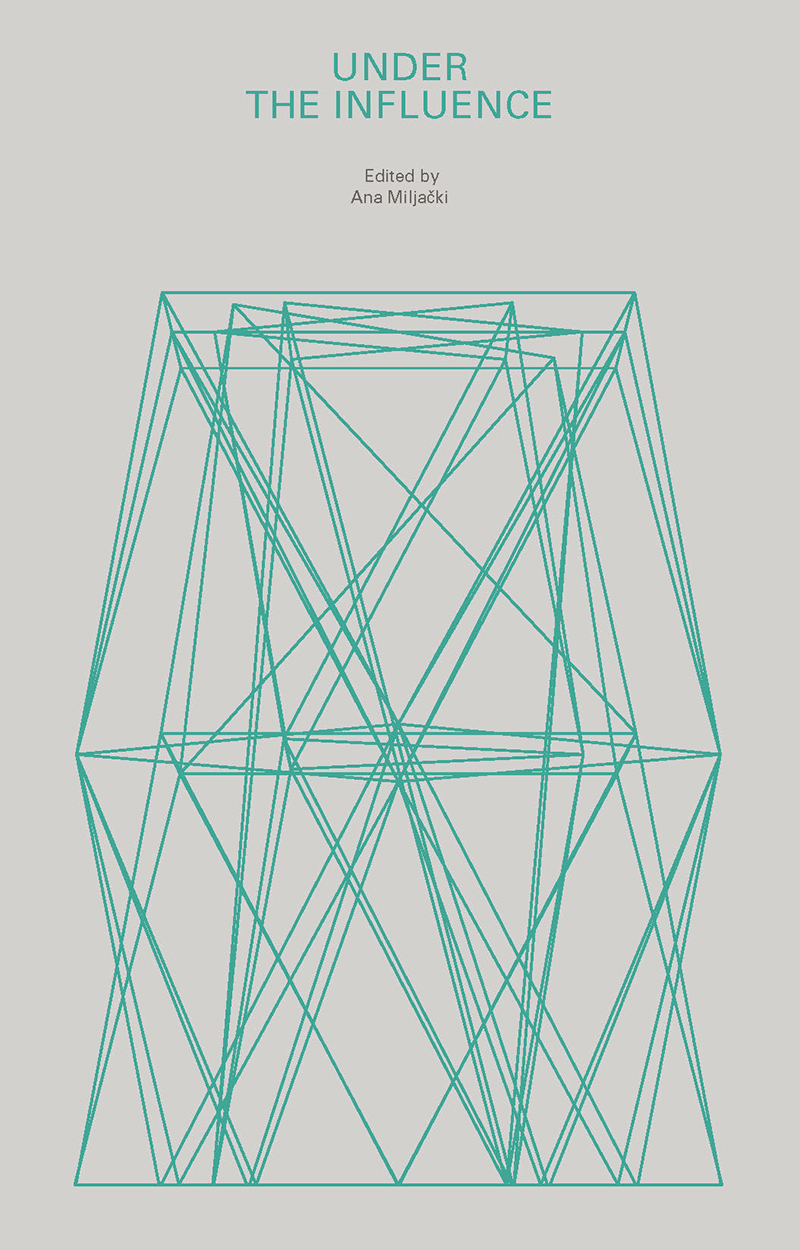 PUBLISHER'S DESCRIPTION:
The Under the Influence book is based on the eponymous symposium, which brought together scholars and practitioners of architecture in order to focus on one of the most anxious disciplinary topics: influence. The symposium invited each of the participants to illuminate a single term—a disciplinary synonym for appropriation—and through that term, the specific strategies, historical, and disciplinary circumstances in which it is enmeshed. It was organized and hosted by Ana Miljački, and presented by the MIT Department of Architecture. With some small additions this is a reprint of that book.
Influence is not easily quantified. It is elusive, even when we casually admit to it as we ogle images on the internet, or feel ourselves softening our resolve on an important issue in light of a beautifully crafted piece of rhetoric; or as the mass-media drone imperceptibly rewires some of our most fundamental desires. When Under the Influence symposium took place at MIT in 2012, the invitation to discuss issues of originality and copying in architecture were still taboo. There have been a number of projects on the topic since, but they have hardly exhausted the topics of copying and copyright, whose importance increases with every act of scrolling or “liking” architectural images on Instagram.
Ana Miljački, PhD is an Assistant Professor of Architecture at Massachusetts Institute of Technology, where she teaches theory and design.
REFERRAL LINKS:

dDAB COMMENTARY:
Seven years is a long time between a symposium and its publication. Under the Influence took place at the MIT Department of Architecture over two days in February 2013 (not 2012, per the publisher's description), but my copy of the accompanying publication of the same name arrived just shy of seven years later. Why the delay? Turns out that Under the Influence from Actar is a republication of the 2014 edition by SA+P Press, with some changes. First are some postscripts, which ironically preface the proceedings; these find some of the symposium participants revisiting their papers or remarks, expanding upon them with work they've done in the interim. Second are occasional comments in the following texts that provide context or make the notes more accurate. On the whole, though, the book is close to the original, therefore acting as an accurate document of the symposium and arguing for the continued relevance of the theme. (Based on the first book's page on the MIT website, it looks like the design of the book remains the same as well, though I prefer the graphic on the cover of the SA+P edition to the Actar edition.)
Under the Influence features a dozen architects and educators tackling a variation on the term "appropriation." Florian Idenburg (SO-IL), for example, discusses "allusion" while Michael Meredith (MOS) talks about "collection" and Amanda Reeser Lawrence focuses on "revision." It appears that Ana Miljački, who organized the symposium and edited the book, selected words aligned strongly with the work of the participants. Reeser Lawrence, for instance, revisits her book on James Stirling (a book that revisited her dissertation on him), who she describes as "one of post-war Modernism's most accomplished and provocative revisioners." Following the symposium structure, the book groups the dozen contributions into three groups of four, each followed by transcripts of the discussions that took place on February 23, 2013.
Departures from this structure are a few: Mario Carpo's keynote from February 22 and an essay by Nader Tehrani, then chairing the MIT Department of Architecture, both at the beginning; at the end of the book is documentation of Fair Use, an exhibition that accompanied the symposium and was based on a workshop led by Miljacki and Sarah Hirschman. As can be grasped in the spreads below, the exhibition gathered modern and contemporary projects by formal similarities, showing how even architects striving for invention are guilty of appropriation. With architecture's slowness, these sorts of formal memes continue to the present, spread by such websites as ArchDaily, Designboom, and Dezeen. In some ways then, very little has changed in seven years.
SPREADS: 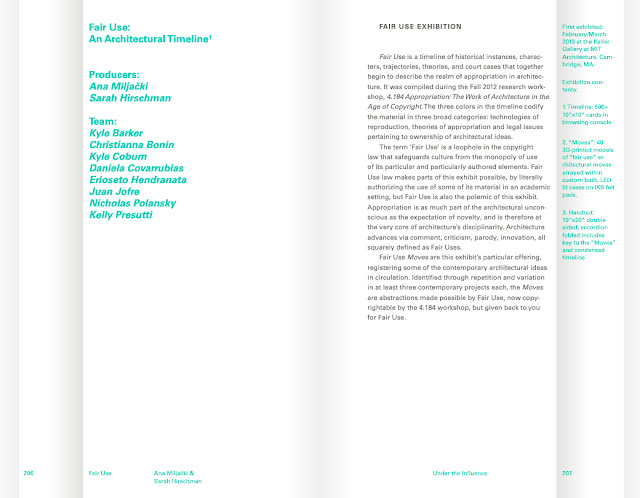 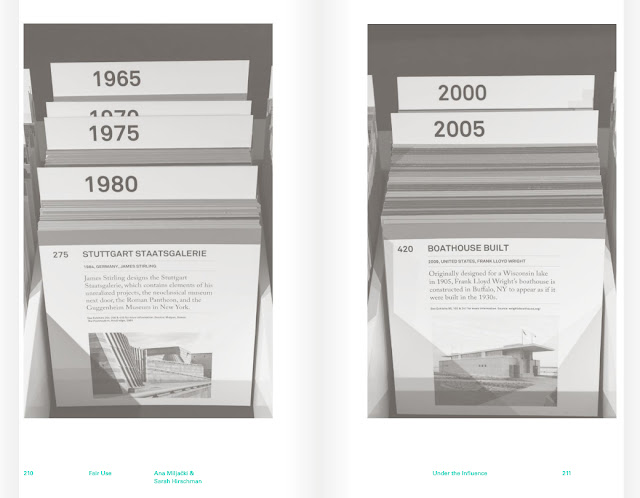 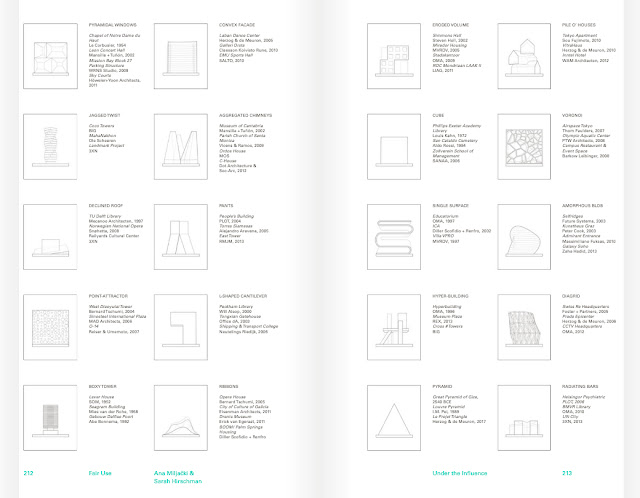 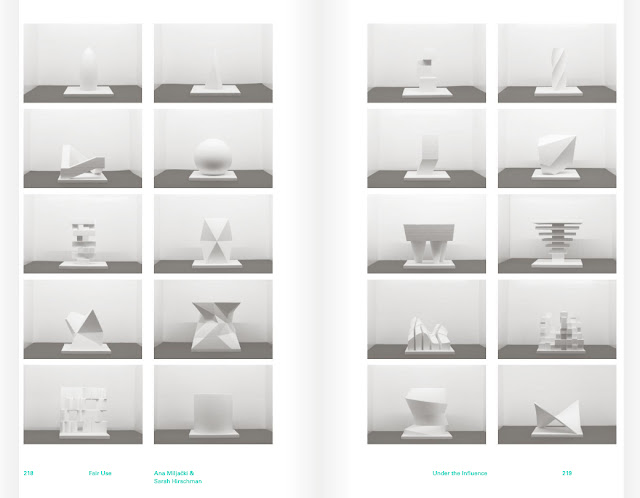