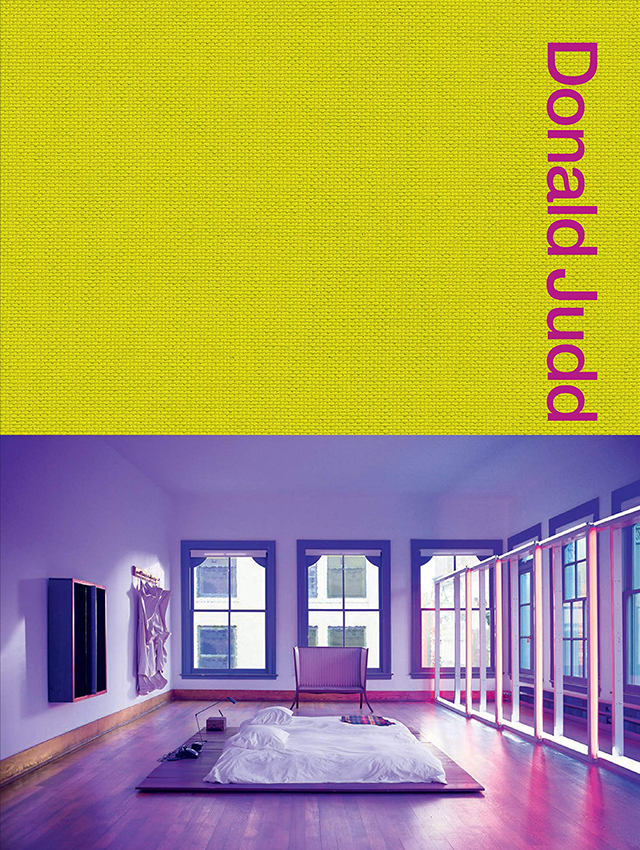 PUBLISHER'S DESCRIPTION:
Filled with newly commissioned and previously unpublished archival photographs alongside five essays by the artist, this book provides an opportunity to explore Judd’s personal spaces, which are a crucial part of this revered artist’s oeuvre. From a 19th-century cast-iron building in Manhattan to an extensive ranch in the mountains of western Texas, this book details the interiors, exteriors, and lands surrounding the buildings that comprise Judd’s extant living and working spaces. Readers will discover how Judd developed the concept of permanent installation at Spring Street in NYC, with artworks, furniture, and decorative objects striking a balance between the building’s historic qualities and his own architectural innovations. His buildings in Marfa, Texas, demonstrate how Judd reiterated his concept of integrative living on a larger scale, extending to the reaches of the Chinati Mountains at Ayala de Chinati, his 33,000-acre ranch south of the town. Each of the spaces was thoroughly considered by Judd with resolute attention to function and design. From furniture to utilitarian structures that Judd designed himself, these residences reflect Judd’s consistent aesthetic. His spaces underscore his deep interest in the preservation of buildings and his deliberate interventions within existing architecture.
Judd Foundation maintains and preserves Donald Judd’s permanently installed living and working spaces, libraries, and archives in New York and Marfa, Texas. The Foundation promotes a wider understanding of Judd’s artistic legacy by providing access to these spaces and resources and by developing scholarly and educational programs.
REFERRAL LINKS:

dDAB COMMENTARY:
Even though the offices of the Judd Foundation are located in the basement of 101 Spring Street (a fact I learned firsthand on a 2013 visit to the renovated building), the place I most associate with Donald Judd is Marfa, Texas, not SoHo. Judd and his wife bought the five-story cast iron building on the corner of Spring and Mercer streets in 1968, but less than five years later, with two babies in tow, they moved to Marfa after Judd acquired a couple buildings that were part of the shuttered Fort D.A. Russell. Judd continued to assemble more and more buildings, using them for living and studio spaces but also for the display of his art and that of other contemporary artists. He did not like the way museums displayed his precise, minimal art, nor did he like the fact museum exhibitions were temporary. So the buildings in Marfa served as a means for him to control the contexts of his artworks and to strongly integrate them with his life. In the decades since the Chinati Foundation opened in 1986, Marfa has become synonymous with Judd and a magnet for art tourism.
Donald Judd Spaces is a photographic guide to the buildings acquired and renovated by Judd in New York City and Marfa between 1968 and his death in 1994. (It does not include the artillery sheds and other Chinati Foundation buildings, instead focusing on the spaces in which he lived and worked.) It is a large book with large photos, both archival and contemporary, accompanied by floor plans of each building and relevant excerpts of Judd's writings. The floor plans are helpful, especially with the sprawling La Mansana de Chinati/The Block, the first buildings he bought in Marfa, but an overall map of the half-dozen buildings in the West Texas town would have been helpful too (one can be found on the Judd Foundation website). The writings are very illuminating, particularly in regards to Judd's cynicism toward museums ("I and a few artists are the reason for the existence of numerous expensive museums of contemporary art...") and the US government ("the inheritance tax of the government is the greatest threat to my work"), which are the main reasons for his decampment to Marfa and creation of the foundation now run by his children.
The photographs, though, are clearly the main reason for anyone to purchase this pricey coffee table book. Although the captions and credits are at the back of the book, making the book as minimal as Judd's sculptures, it's easy to distinguish between photos from decades ago versus those of a few years ago. The latter are highly staged ... but so are the former, actually, if a bit more cluttered with the objects of daily life. Judd's approach to art extended to his life and the spaces he occupied. Although this does not mean he lived in spaces free of stuff, he controlled how that stuff was arranged, mainly through the sparse restorations of the buildings he acquired and the design of the furniture he put inside them. It didn't hurt that he kept the five-story building on Spring Street, had numerous buildings in the center of Marfa, and near the end of his life owned thousands of acres of ranch land nearby with even more buildings.
Judd's controlling, exacting nature kept him moving from place to place, which resulted in the diffusion of his art and life into contexts more and more removed from society. Stable throughout the decades and places was a preference for old buildings of all types: warehouses, stores, houses, banks, barns, whatever matched his desires and served his purposes. Although he never built anything new, he was as much an architect as an artist, even maintaining an architecture studio for the building renovations that must have kept him as busy as his artworks did. Digesting the spaces in this book through photos, words, and drawings furthers my desire to venture to Marfa and someday walk in the spaces that were shaped by Judd and those who first built them.
SPREADS: 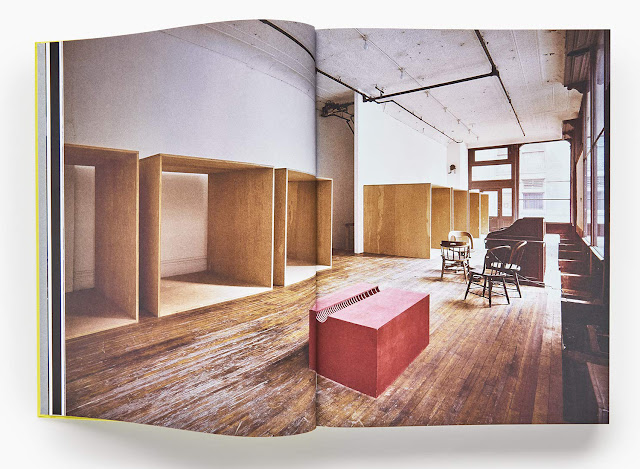 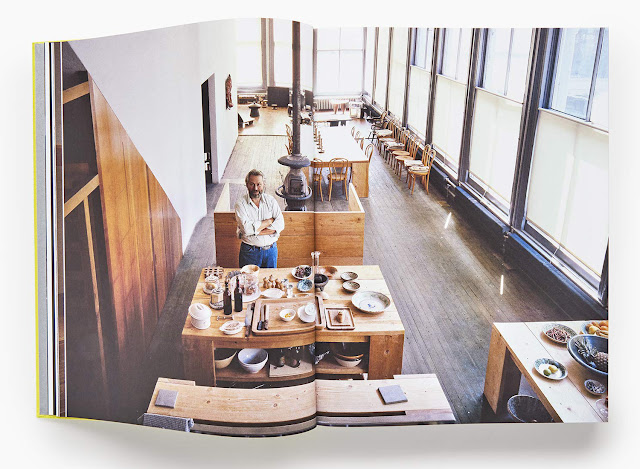 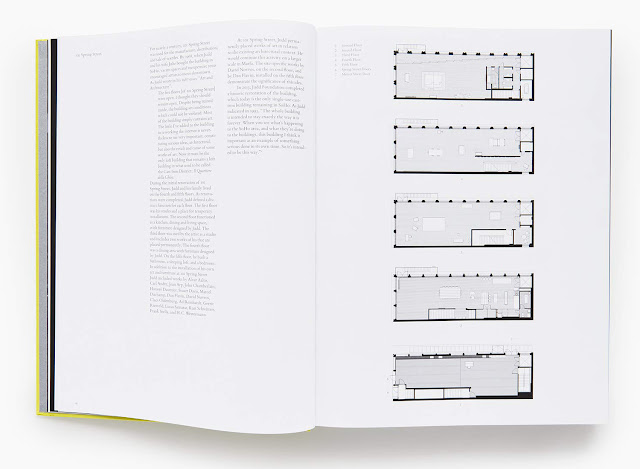 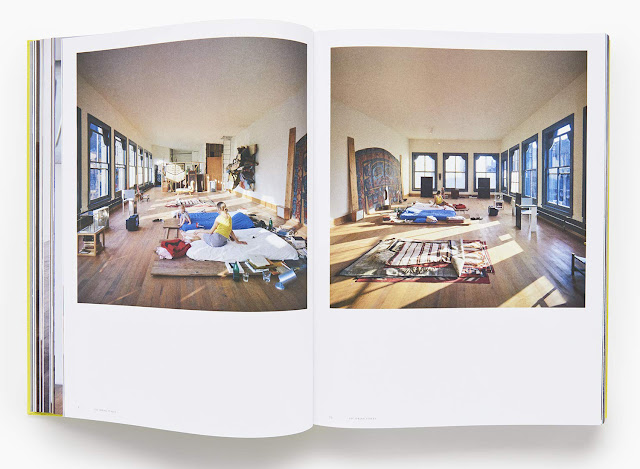