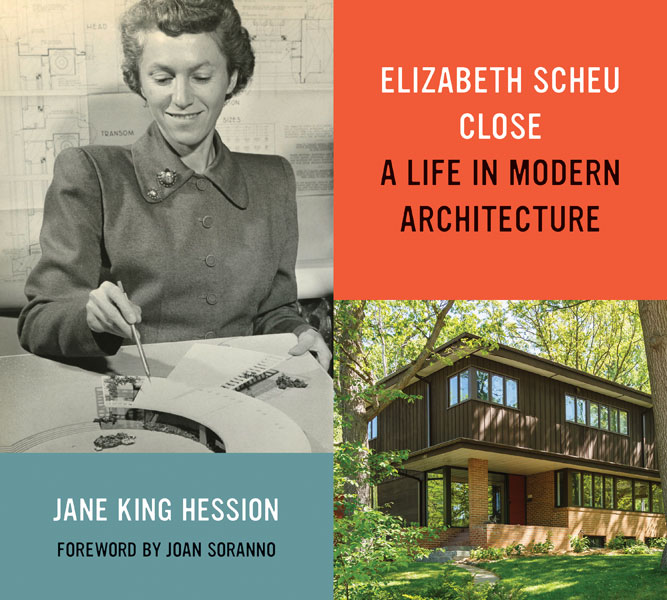 PUBLISHER'S DESCRIPTION:
Elizabeth “Lisl” Scheu Close (1912–2011) left an indelible mark on Minnesota’s built landscape during her six decades as an architect. In 1938, with her husband, Winston Close, she founded the state’s first architecture firm dedicated to modernism. In addition to designing the first International Style house in Minneapolis, the firm also created more than 250 handsome and efficiently planned modern residences. One of few women who were practicing architects in the mid-twentieth century, she blazed a trail for future generations of women in the profession.
As Jane King Hession shows, the trajectory of Lisl’s architectural career was shaped by the political, economic, and aesthetic upheavals of the twentieth century. Raised in a renowned modern house in Vienna, Austria, Lisl was exposed to revolutionary ideas in art and architecture at a young age. Forced to emigrate to the United States as the Nazis rose to power in Europe, she completed her architectural education at MIT. During the Depression, she struggled to find work and encountered challenges as a young woman in the field. In her pursuit of and devotion to a singular and successful career as a modern architect, she proved herself to be talented, determined, and adept at negotiating obstacles.
Through documentation of Lisl’s projects, this personal and professional biography also explores multiple aspects of modern architecture, including the innovative use of new materials and technologies, the design of prefabricated houses, and the relationship between residential design and changing American lifestyles.
Jane King Hession is a Minnesota-based architectural historian specializing in modernism. She is a founding partner of Modern House Productions and coauthor of John H. Howe, Architect: From Taliesin Apprentice to Master of Organic Design, Ralph Rapson: Sixty Years of Modern Design, and Frank Lloyd Wright in New York: The Plaza Years, 1954–1959.
REFERRAL LINKS:

dDAB COMMENTARY:
Astute fans of modern architecture, even if they're not familiar with Minnesota-based architect Elizabeth "Lisl" Scheu Close, should recognize the name Scheu. Adolf Loos designed a house at 3 Larochegasse in Vienna for the Scheus, specifically Gustav Scheu and Helene Scheu-Riesz, parents of Lisl. The house was completed the year of her birth, making it one of the earliest residences in the modern style. Lisl lived there for twenty years, until 1932 and her departure for architecture school in the United States. Living in that house, which was visited by Richard Neutra, Josef Frank, Aldo van Eyck, Jane Addams, Ezra Pound, and many others, basically solidified Lisl as an architect — and a staunch modernist one — even though the architecture school she entered at MIT was still Classical in its pedagogy. There she met Winston Close, whom she'd follow to Minnesota, where they founded Close and Scheu, the first architectural practice in the state dedicated to modern architecture. Fifty-four years later the husband and wife retired from what had become Close Associates, and in 2002, at the age of 90, Lisl was given the AIA Minnesota Gold Medal.
Jane King Hession's remarkable new book traces the life of Lisl from her childhood in Vienna to her accolades late in life, revealing the modern buildings that her and her husband designed over five-and-a-half decades. Many of the projects they designed were residential, so one of A Life in Modern Architecture's chapters is devoted to houses and housing, while another is about prefabrication (her thesis at MIT was "A Production Plant for Pre-Fabricated Houses"), and yet another focuses on larger, later "buildings for work and play." Some of the last, such as the award-winning Freshwater Biological Institute, are exceptional, but the houses stand out the most. King Hession actually describes the houses as being like Lisl herself: "They are handsome, well designed, and durable. They are practical, efficient, and useful. They are made of strong materials that age well. ... They have European roots, yet they are well suited to life in America."
A Life in Modern Architecture draws attention to a figure who was well-known locally but, if my previous knowledge is any indication, was not known very well outside of Minnesota. A clipping from a 1938 news story about the Closes' marriage, "Architect Weds Architect," expresses that local recognition early, though it also captures what was the apparent novelty of an architectural practice devoted to modernism and it being run, in part, by a woman. So Lisl's story is about the work she produced with her husband but also her pioneering position as a woman in a male-dominated profession. Yet, as King Hession points out, "Lisl was always too busy creating architecture to consider her role in the broader context of the discipline." We can tank King Hession for elucidating that role and those creations to a wider audience with this book.
SPREADS: 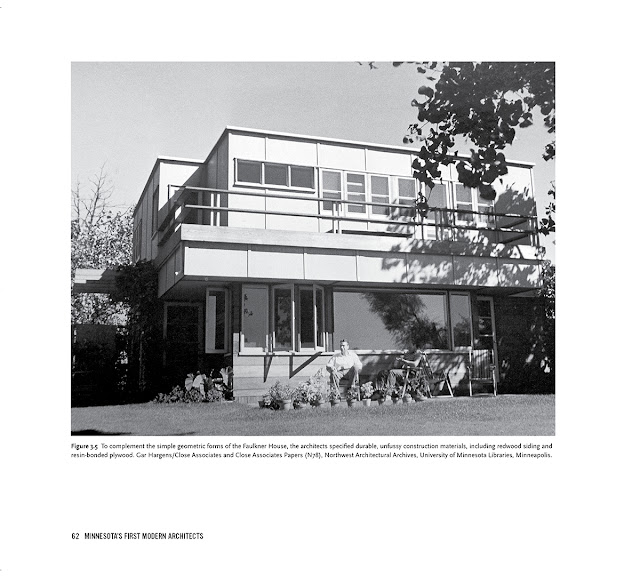 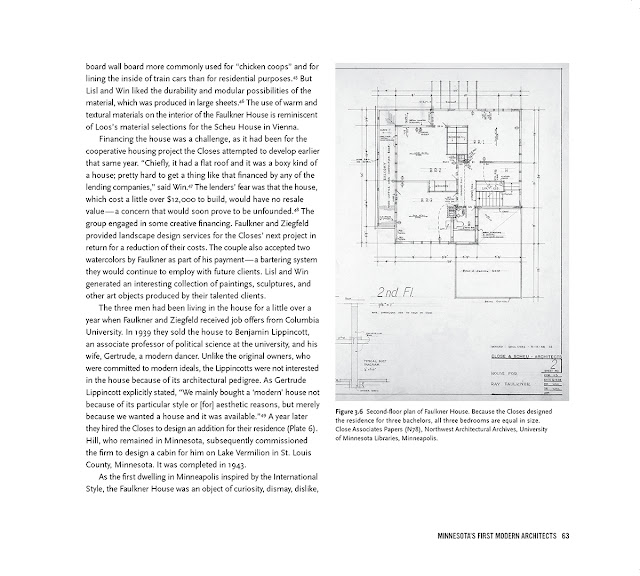 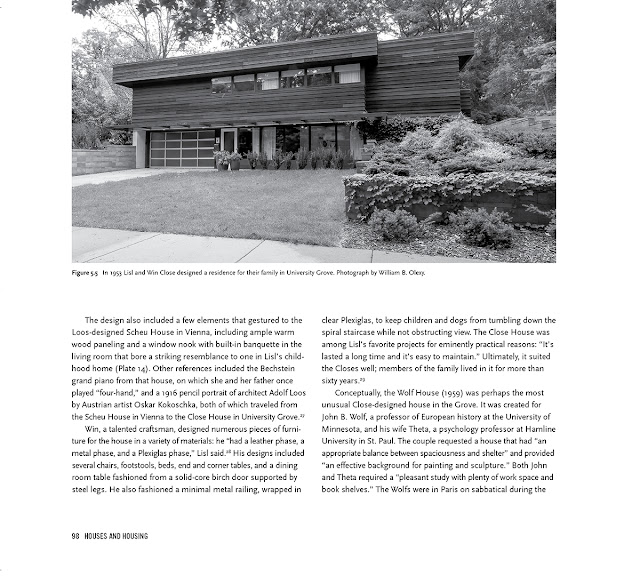 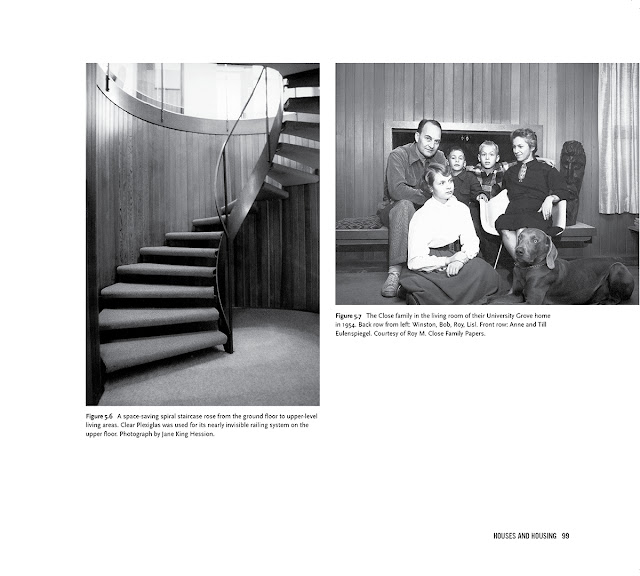