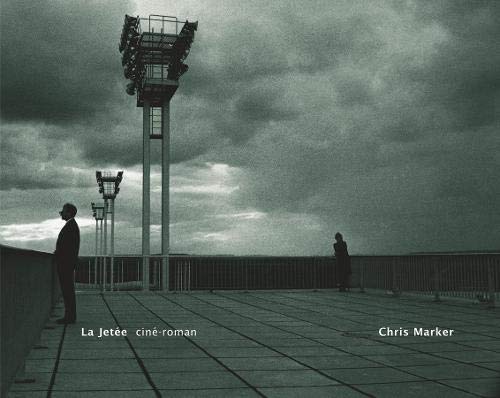 PUBLISHER'S DESCRIPTION:
La Jetée is the book version of the legendary 1964 science fiction film about time and memory after a nuclear apocalypse. Chris Marker, the undisputed master of the filmic essay, composed the film almost entirely of still photographs.
It traces a desperate experiment by the few remaining survivors of World War III to recover and change the past, and gain access to the future, through the action of memory. A man is chosen for his unique quality of having retained a single clear image from prewar days: no more than an ambiguous memory fragment from childhood — a visit to the jetty at Orly airport, the troubling glance of an unknown woman, the crumpling body of a dying man.
Chris Marker is a filmmaker, photographer, traveler, and he likes cats.
REFERRAL LINKS:

dDAB COMMENTARY:
The first time I watched La Jetée, Chris Marker's classic 1964 sci-fi film, was about 20 years ago at Facets in Chicago, when it was on a double-bill with Jean-Luc Godard's Alphaville. Much more than Godard's film, Marker's half-hour film has stuck with me ever since. La Jetée, which was co-opted by Terry Gilliam for 12 Monkeys, tells the story of a man from the future — when people live underground due to radioactive devastation on the surface — who travels through time to help humanity. Pivotal is a vision he had as a boy on the jetty at Orly airport, a scene that lends the film its name but which I won't spoil for anybody here. Most amazing is the way Marker tells the story solely through still images and voiceover narration; there is only one brief moving image, but I won't spoil that powerful scene either.
Given its structure as a series of stills, Marker's film lends itself perfectly to a shot-by-shot documentation in print. First released in hardcover in 1992 (I have the 1996 paperback the below spreads are taken from), La Jetée was masterfully designed by Bruce Mau, who was involved in designing more than 100 titles by Zone Books starting with the famous Zone 1/2 published in 1985. Instead of giving each still its own full-bleed page (something he does occasionally), here he varies the size and layout of the images to give the book some variety as well as the same rhythm and tension as the film. The black-and-white images are set in deep, dark purplish blue background that gives them some definition and makes the transcription of the voiceover narration easy to read. This book is a must for fans of the film, but given that the binding of my paperback copy has come apart out over the years, I'd recommend the hardcover.
SPREADS: