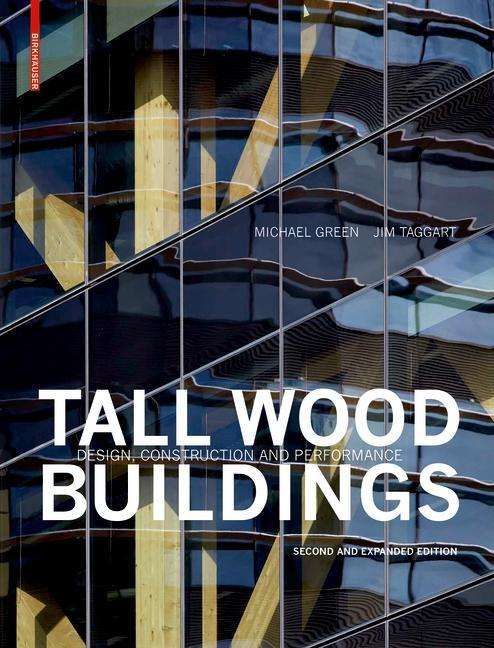 PUBLISHER'S DESCRIPTION:
Tall wood buildings have been at the foreground of innovative building practice in urban contexts for a number of years. From London to Stockholm, from Vancouver to Melbourne timber buildings of up to 20 storeys have been built, are under construction or being considered. This dynamic trend was enabled by developments in the material itself, prefabrication and more flexibility in fire regulations. The low CO2 footprint of wood - often regionally sourced - is another strong argument in its favour. This publication explains the typical construction types such as panel systems, frame and hybrid systems. An international selection of 13 case studies is documented in detail with many specially prepared construction drawings, demonstrating the range of the technology.
Michael Green, Michael Green Architecture, Vancouver; Jim Taggart, Sustainable Architecture and Building Magazine.
REFERRAL LINKS:

dDAB COMMENTARY:
When I was working on How to Build a Skyscraper in early 2017, I really wanted to include a tall building framed in wood. At the time, though, mass timber buildings were hardly tall. In my mind I was aligning them with iron buildings in Chicago and New York in the 1880s — short by today's standards but tall at the time and on the cusp of getting taller with technological advances — but a building such as the five-story Bullitt Center in Seattle would have been out of place alongside the 31-story Rainier Tower, also in Seattle, much less the supertalls elsewhere in the book.
If I were writing the same book now, or making an update to it, things would be different since timber buildings are getting taller every year. HoHo Wien, for instance, tops out at 24 stories and 84 meters, while the 18-story Mjøstårnet building in Norway is 1.4 meters taller, making it the tallest wood building — for now. These buildings, which were both completed last year, clearly fall into the "tall" category; relatively short compared to steel and concrete towers, nevertheless they are more vertical than horizontal. More importantly, they point the way forward for a generation of sustainable skyscrapers, which is the main reason I wanted a wood building in my book.
Furthermore, if I were writing How to Build a Skyscraper now, Tall Wood Buildings by architect Michael Green and editor Jim Taggart would be my primary printed resource, with one of the buildings documented in their book surely ending up in mine. The first edition of their book also happened to come out in 2017, when it sold out quickly. This second, expanded edition has five new case studies, bringing the total to eighteen. Three of those are the buildings mentioned above, falling into two of the three types of systems that structure the case studies: Frame Systems (Bullitt and Mjøstårnet) and Hybrid Systems (HoHo Wien). The third, Panel Systems, tend to be on the shorter side, with the tallest example being the eight-story Puukuokka Housing Block in Finland.
The case studies in Tall Wood Buildings are excellent, with each building given at least six pages and documented with detailed text, photographs (both fabrication/construction and finished), and drawings. The last are consistently drawn and rendered with wood grain to highlight the wood components. The book isn't just case studies though. They start on page 64, after six chapters — an extended essay, really — that argue for building taller with wood, discuss the types of engineered wood products and structural systems, address performance and safety, and touch upon design, construction, and technology. The texts ready readers for the case studies, which any architect interested in building taller with wood will want to devour.
SPREADS: 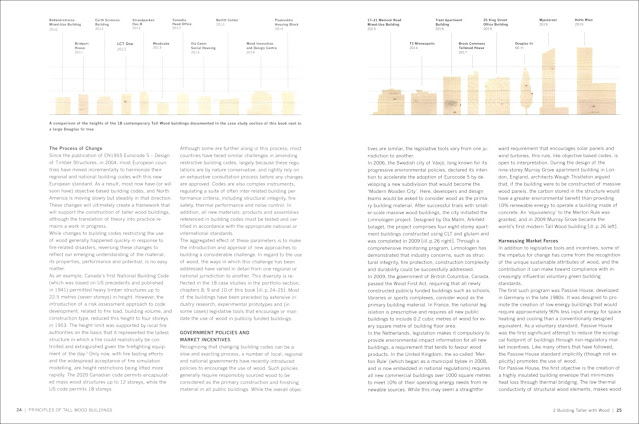 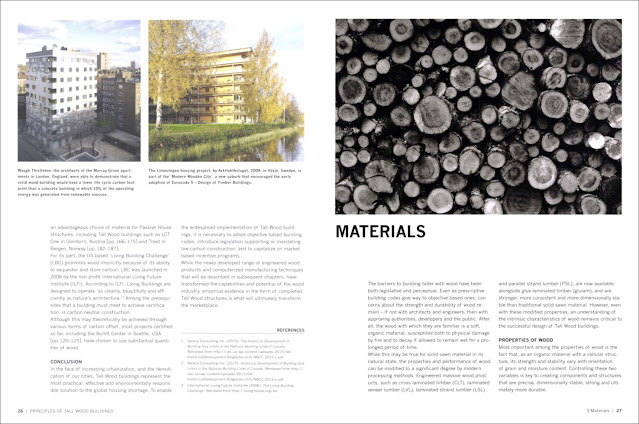 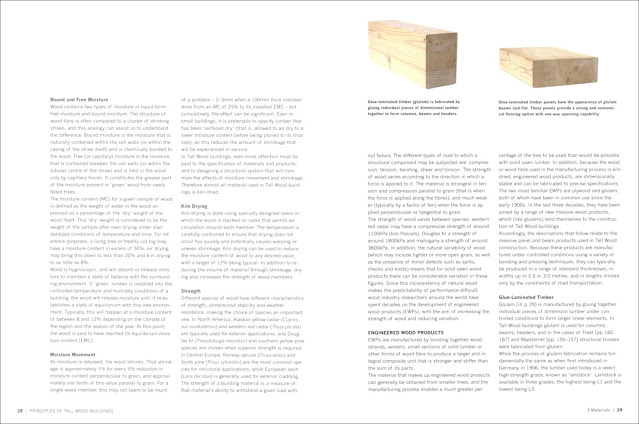