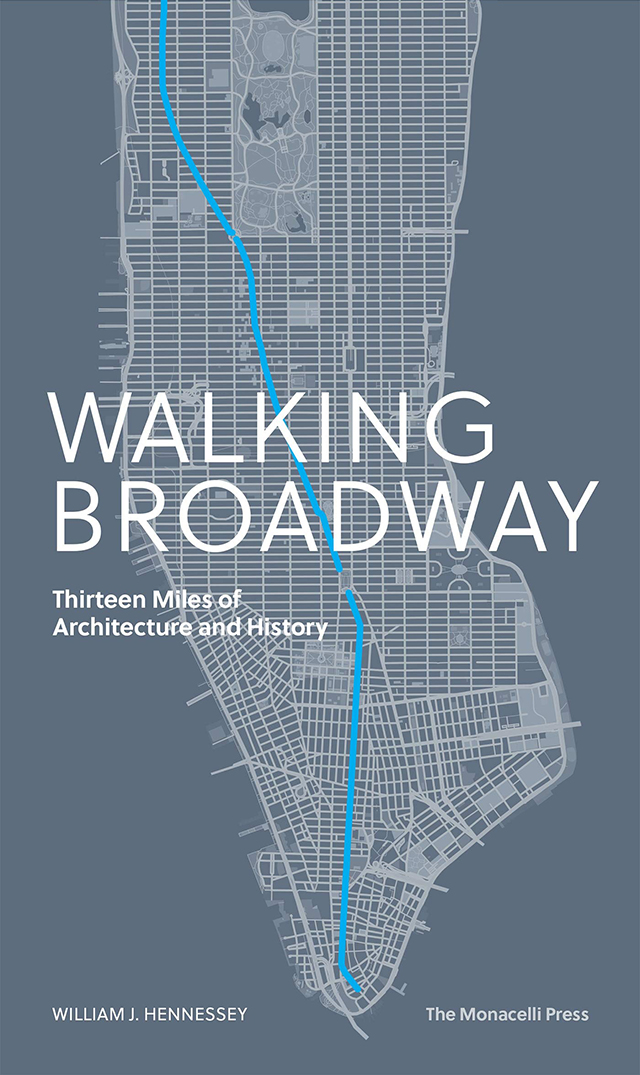 PUBLISHER'S DESCRIPTION:
Walking Broadway offers readers an architectural tour of the entire length of Broadway from Bowling Green to the Harlem River. Through fourteen structured walks the book not only presents the history of New York’s most famous avenue, but also explores its architecture in depth, block by block, building by building.
This is a book about what can be seen and experienced on Broadway today. Buildings are chosen for discussion first and foremost because they are interesting to look at. In a relaxed and engaging style, the author presents the building’s story, explores the reasons why it is there, and explains why it looks the way it does. Along the way, the reader not only has the chance to discover fascinating and unusual buildings, but also gains a comprehensive understanding of the historic, social, economic, and political forces which shaped Broadway’s growth and character.
Art historian William Hennessey has taught at Vassar College, the University of Kansas, the University of Kentucky, and the University of Michigan and directed the art museums at each of those institutions. From 1997 to 2014 he was director of the Chrysler Museum of Art in Norfolk, Virginia. Hennessey is the author of catalogues and articles on a variety of art and design topics, including nineteenth-century architecture and twentieth-century industrial design.
REFERRAL LINKS:

dDAB COMMENTARY:
Although I've pondered it every now and then, I've never gotten around to walking the entire length of Broadway, Manhattan's tip-to-tip snaking thoroughfare, all at once. If and when I do, I want to start in the north, in the Bronx, where Broadway extends (it actually continues well into Westchester County), then cross the bridge into Manhattan's Inwood neighborhood and continue walking through Washington Heights, Harlem, Morningside Heights, the Upper West Side, Midtown, and so on down to the Financial District and Bowling Green, the small park where Broadway begins. Such a walk would effectively be backwards, considering that New York's development started at the southern tip of Manhattan and moved progressively northward over time until the whole island was basically leveled and filled with millions of residents. Nevertheless, I like the idea of going "back in time" as I walk down Broadway.
South to north is the preferred route for guides to Broadway, of which there are many, including Fran Leadon's recent "history of Manhattan told through its most celebrated street," Michelle Young's contribution to the Images of America series, Kevin Dann's forthcoming Enchanted New York: A Journey along Broadway through Manhattan's Magical Past, and William Hennessey's new on-foot guidebook to "thirteen miles of architecture and history."
Walking Broadway is arranged as fourteen walks, ranging from less than a half mile to nearly three miles. The different lengths "correspond to distinct stretches of Broadway," as Hennessey explains, with an average of about twenty buildings of note in each walk. These buildings are numbered and keyed to maps, but the author departs from them — and from Broadway — to point out important nearby landmarks that are given letter designations and also shown on the maps. The organization and layout is straightforward and is aided by most of the buildings being given a photograph, most of them exteriors, but occasionally inside a building. (The blue of the book's page design, it should be noted, is not as bright as the spreads below indicate; it's more akin to the trace of Broadway on the cover.)
In terms of the selection, Hennessey does not discriminate between historical buildings and contemporary ones, but he tends to lavish more words on the former than the latter. This stems from the fact there is more history to tell with older buildings. And he does so with an accessible voice that should make the book appealing to a wide audience, not just architects. Without as much history, though, descriptions of recent buildings tend to focus on formal characteristics; of course, he describes the appearances of the older buildings as well, rounding out the "architecture and history" of the book's subtitle. Walking Broadway spurs me to consider, once again, walking all of Broadway; I hope soon to determine if the guidebook works well back to front.
SPREADS: 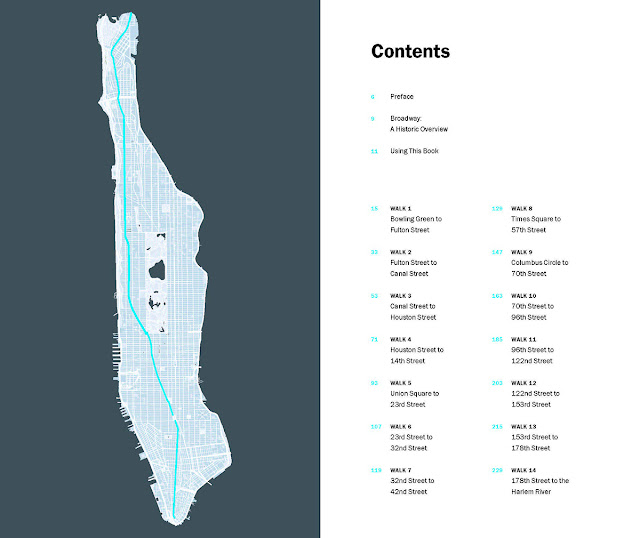 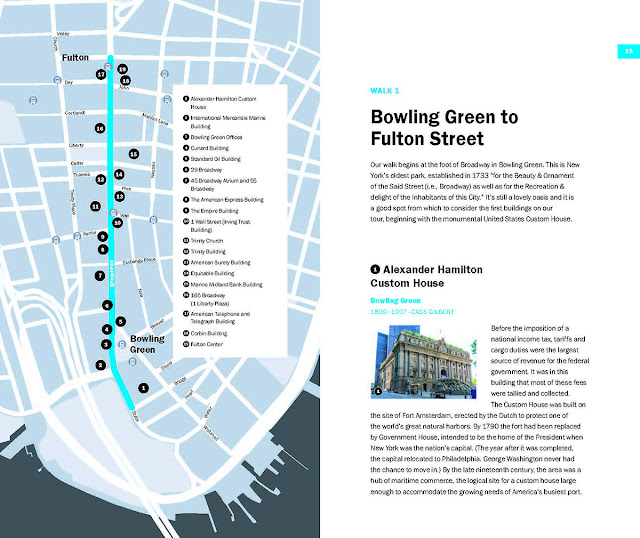 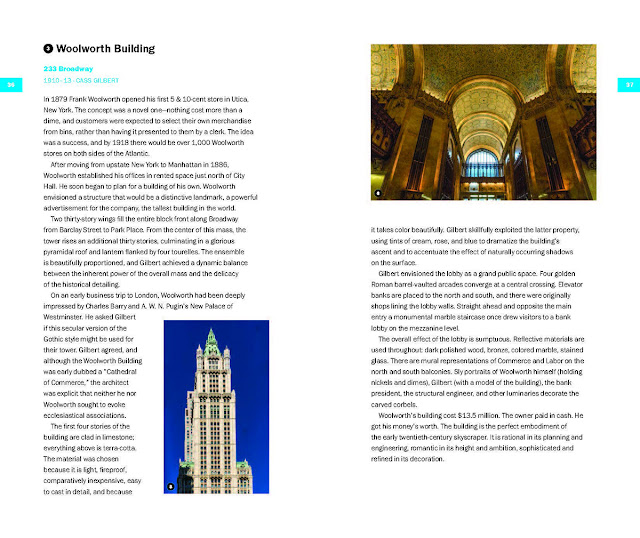 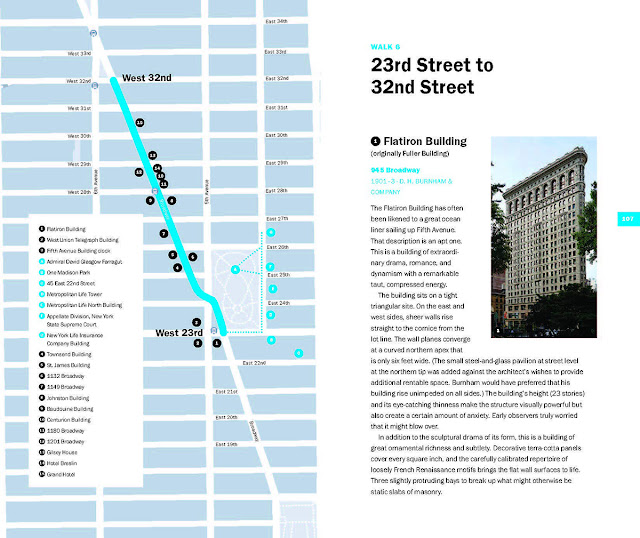 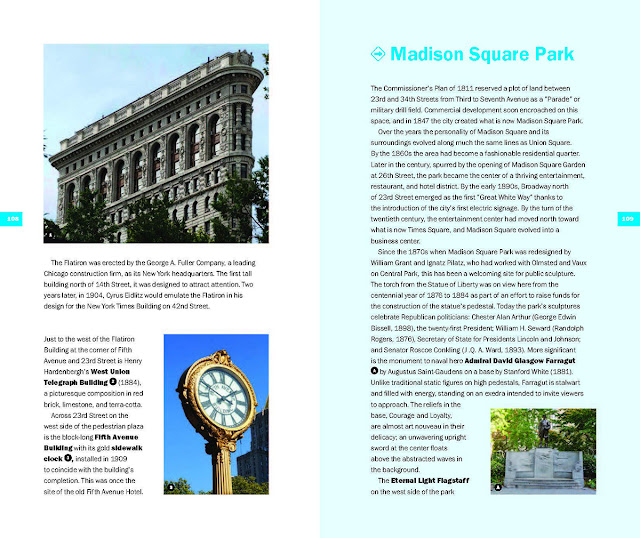