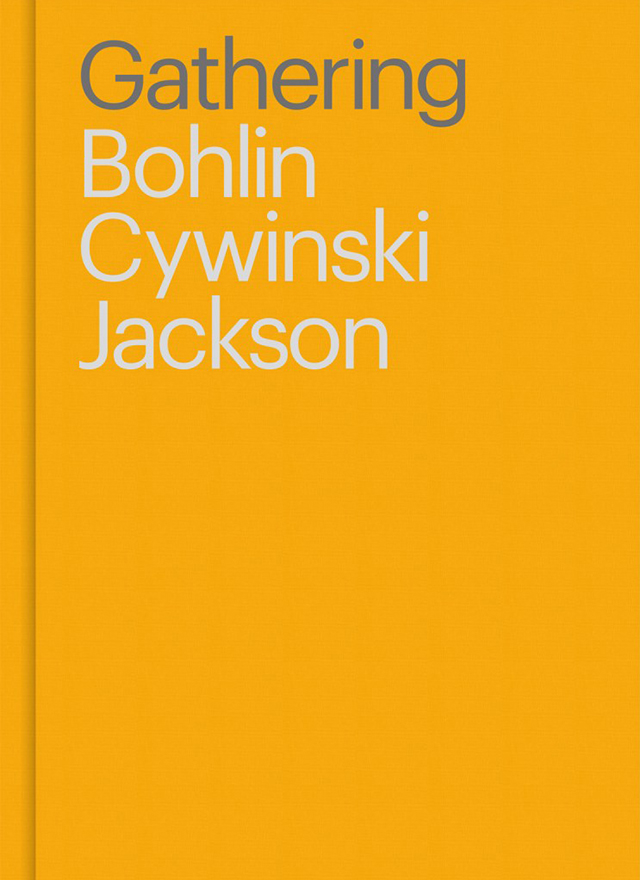 PUBLISHER'S DESCRIPTION:
Good buildings require an understanding of the principles of structure, light, space, and material, but great buildings require an understanding of people. The most successful inspire through the interactions and connections made within them. Gathering is the latest book from the award-winning architecture firm Bohlin Cywinski Jackson. This collection of work exemplifies how architecture has the power to bring people together by design, allowing them to engage with one another in new ways, to generate ideas, share their passions, and build communities. The fourteen projects included in this volume range greatly in size, function, and aesthetic, from the High Meadow Dwellings at Fallingwater to the Newport Beach Civic Center in southern California to Apple Stores located around the world. Through full-color photographs as well as conceptual sketches and diagrams, each case study gives insight into Bohlin Cywinski Jackson’s design process, and how the firm’s approach has helped transform clients’ institutions, workplaces, retail environments, research laboratories, and public spaces into extraordinary places for people. An introductory essay and chapter text by noted architectural writer Sam Lubell accompanies this volume.
Sam Lubell is a writer based in New York. He has written nine books about architecture for Phaidon, Rizzoli, Metropolis Books and Monacelli Press.
REFERRAL LINKS:

dDAB COMMENTARY:
I can't think of a worse irony than writing a monograph about the power of architecture to bring people together and releasing it when the United States and much of the rest of the world enters a pandemic, one in which a virus spreads most easily when people gather and therefore forces them to shelter in their respective homes for an indefinite timeframe. On top of that, Bohlin Cywinski Jackson, the firm that wrote the monograph with author Sam Lubell, launched Gathering in early February with a panel discussion that was planned as the first of many under the "Year of Gathering" banner. A second discussion happened a few weeks later, but subsequent events moved into the virtual realm, as digital gatherings that are about the ideas explored in the book and by the firm but have also been retooled to be about the predicament we find ourselves in with COVID-19.
I did not attend the first event, which took place in nearby Brooklyn, nor any of the subsequent "webinars," but given that the first discussion focused on four retail projects but only one of them (Apple Stores) is in the monograph, it appears BCJ wanted to use the events to expand upon Gathering, admirably using the book as a starting point for deeper discussions, not just using the discussions to promote the book. With fourteen projects across more than 300 pages, and with many of those pages given over to illustrations, particularly color photographs, Gathering cannot cover every aspect of the designs. Take the Apple Stores, which are presented on pages 160 to 195; it's the most space given to any project in the book, but these stores, as popular and ubiquitous as they are, should really have their own book. The text and images discuss eight of the "dozens of worldwide stores designed for Apple," half of them in Manhattan, where the 24-hour flagship on Fifth Avenue is famously marked by a glass cube. Attention to context, detail, and the client's demands comes across most strongly in the presentation of these stores. Apparently, addressing these concerns will result in result in spaces where people feel comfortable, where people want to gather.
The thirteen other projects range from educational and institutional to offices and mixed-use towers. The best projects, in my mind, are strongly aligned with the rustic, for lack of a better word, and highly site-responsive designs of early buildings designed by founder Peter Bohlin. These include the Frick Environmental Center and High Meadow at Fallingwater, both in Pennsylvania, where BCJ has three of its six offices. Certainly it helps that both projects are smaller than many of the other projects and have beautiful natural sites: the former "within 644 wooded acres of Frick Park" in Pittsburgh and the latter located a half-mile from Frank Lloyd Wright's Fallingwater on the edge of, appropriately, a meadow. These and the rest of the projects are carefully and beautifully documented, thanks in part to the slightly smaller matte gray pages inserted into the book at the start of each project. These pages, visible in the spreads below, give the book a rhythm that is most noticeable when flipping through the book. These pages spring to attention, acting as invitations to learn more about BCJ's spaces for gathering — in a year when social gatherings outside of the digital realm are on hold.
SPREADS: 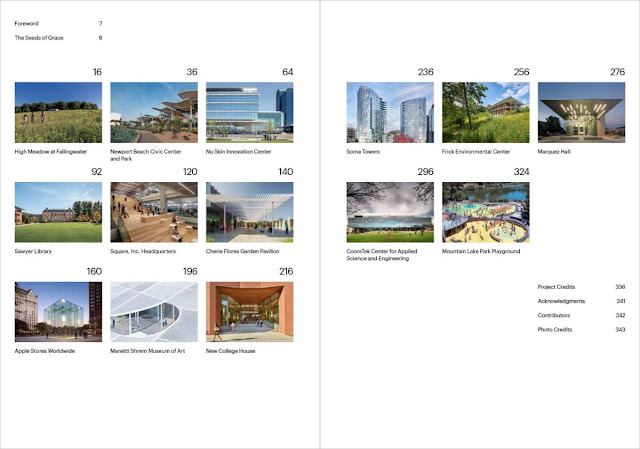 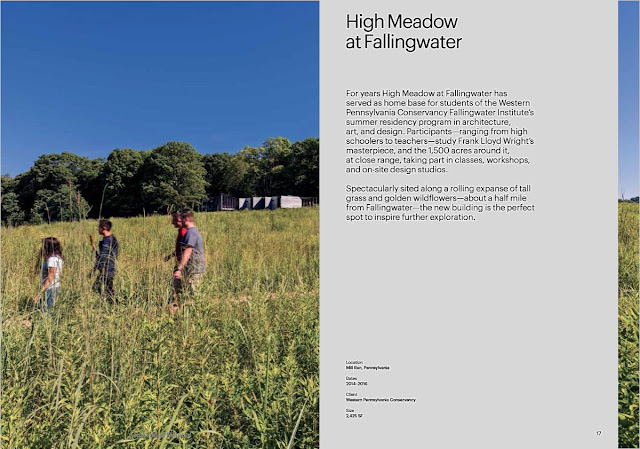 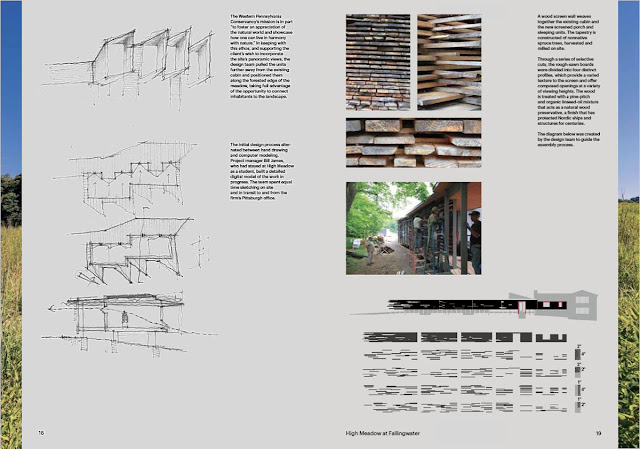 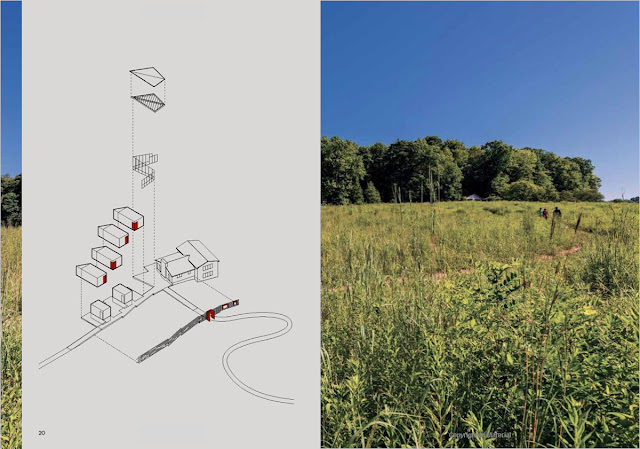