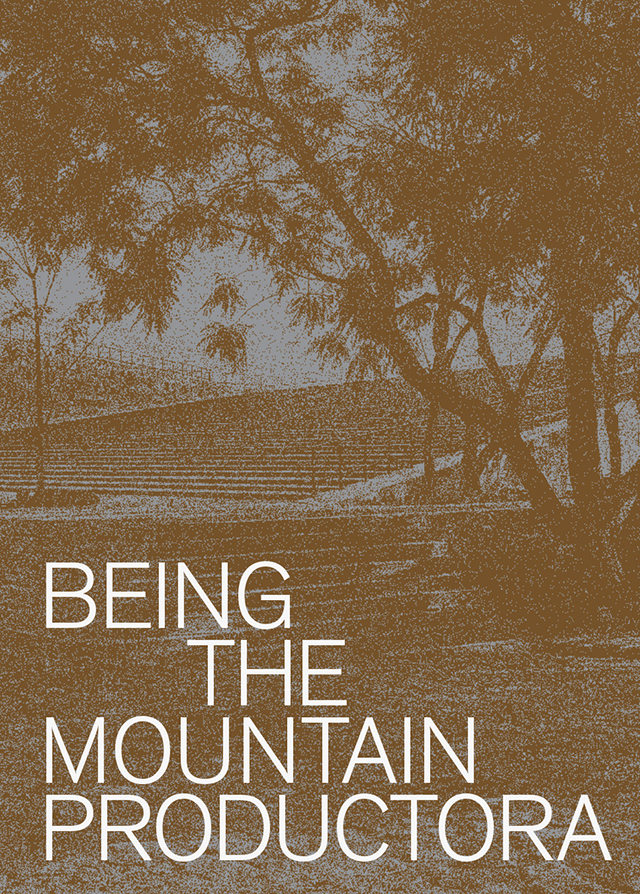 PUBLISHER'S DESCRIPTION:
The result of research PRODUCTORA initiated as winners of the Mies Crown Hall Americas Prize for Emerging Practice at Illinois Institute of Technology, Being the Mountain examines the relationship between architecture and the ground it occupies, an interaction so obvious—a building must touch the ground—that it often remains underexplored. Richly illustrated contributions by Carlos Bedoya, Frank Escher, Wonne Ickx, Véronique Patteeuw, and Jesús Vassallo revisit significant moments in architectural history that cast new light on the techniques and legacies of modernism, especially in settings like Mexico and California, where architects such as Ricardo Legorreta and John Lautner incorporated dramatic natural topography in their agendas. Additional essays investigate the role of the ground in the thought of Kenneth Frampton in the 1980s and Luis Moreno Mansilla in the 1990s, as well as point to important parallels between premodern land practices, twentieth-century art, and today’s architecture.
Together, these episodes call into question our received assumptions and present new possibilities for the connection between a building and its site. A portfolio of related projects by PRODUCTORA concludes the book, further drawing out the idea of architecture as a form of constructed ground. Open Systems have been the research focus of CoLab since 2013. This book collects some relevant and engagingly contemporary insights. It also includes new unpublished interviews and articles with international participants leading players in this field.
REFERRAL LINKS:

dDAB COMMENTARY:
Although the Pavilion on the Zocalo brought Mexico City's PRODUCTORA some well-deserved attention in 2016, when it garnered the firm the MCHAP.emerge award, the pavilion was overshadowed just one year later when they completed (with Isaac Broid) the Teopanzolco Cultural Center. A photo of the latter — a "landscraper" if there ever was one — is on the cover of the studio's new book, whose title, Being the Mountain, clearly alludes to architectural forms that merge with the earth. I'm a fan of the Teopanzolco building, and of landscrapers in general, so this book's exploration of topographic architecture is a welcome treat.
A product of studios that PRODUCTORA's four partners (Carlos Bedoya, Wonne Ickx, Victor Jaime, Abel Perles) conducted at IIT after winning MCHAP.emerge, the book features a half-dozen essays followed by a presentation of a decade of the firm's work through images. In the former, Ickx explores some of Ricardo Legorreta's buildings, most notably the mountain-like Hotel Las Brisas Ixtapa (seeing the building here reminds me how close I came to including it in my 100 Years, 100 Buildings for 1981), and later in the book he dives into Luis Barragán's Jardines del Pedregal and Francisco Artigras's striking Casa del Risco (fourth spread below) in the same development. Bedoya looks at art and architecture — both vernacular and capital-A architecture — that carves into the earth. External contributions are found in Véronique Patteeuw's essay on "Kenneth Frampton's interest in the ground," Frank Escher discusses modern houses in California that creatively incorporate the rocky landscapes they sit upon (second spread), and Jesús Vassallo writes about the "geologic gestures" in the work of Luis Moreno Mansilla and others (third spread).
With the texts taking up approximately 75 of the book's 96 pages, leaving only 20 pages for PRODUCTORA's own projects, this book will appeal to people looking for theory or criticism more than a monograph. (Fans of the studio will have to wait for a traditional monograph, though a case study of Teopanzolco Cultural Center was published by Arquine last year.) Thirty-five dollars is a lot for an architecture book clocking in at less than 100 pages, but thankfully the design of the hardcover book is very sharp. The design by Mainstudio features the Teopanzolco image printed directly on the linen cover; canary-yellow cardstock (or is it saffron?) is used for the pages that start and end the book; and in between is a great paper and ink selection that makes the color images jump off the pages. Although fans of landscrapers, like me, should like Being the Mountain, hopefully new fans will be made from the book as well.
SPREADS: 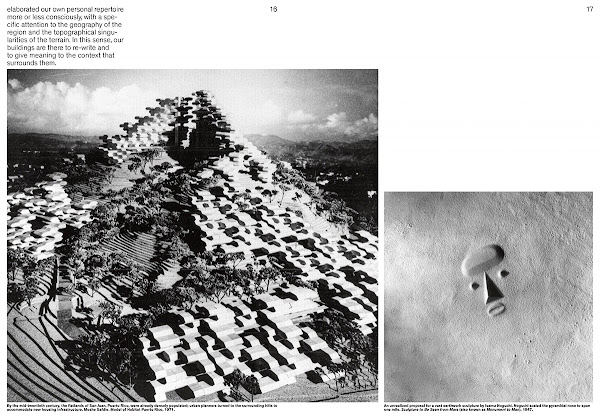 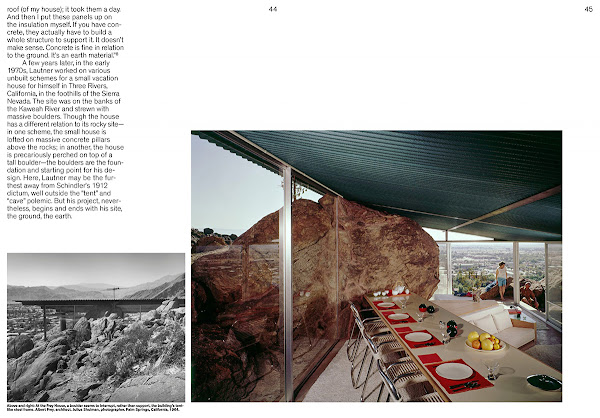 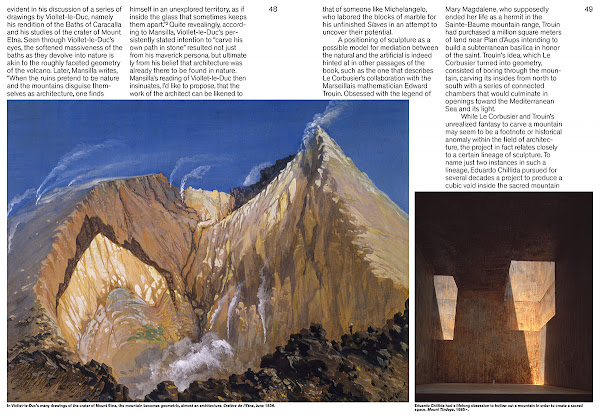 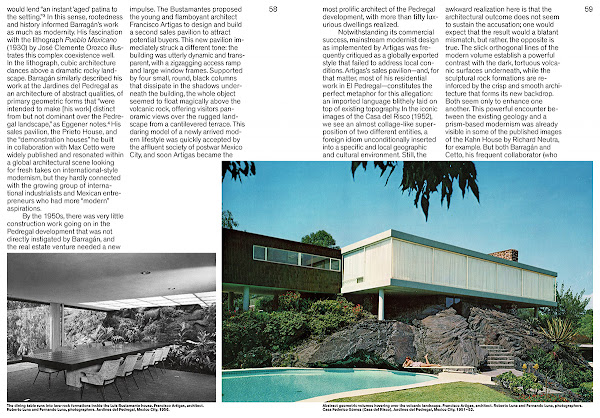