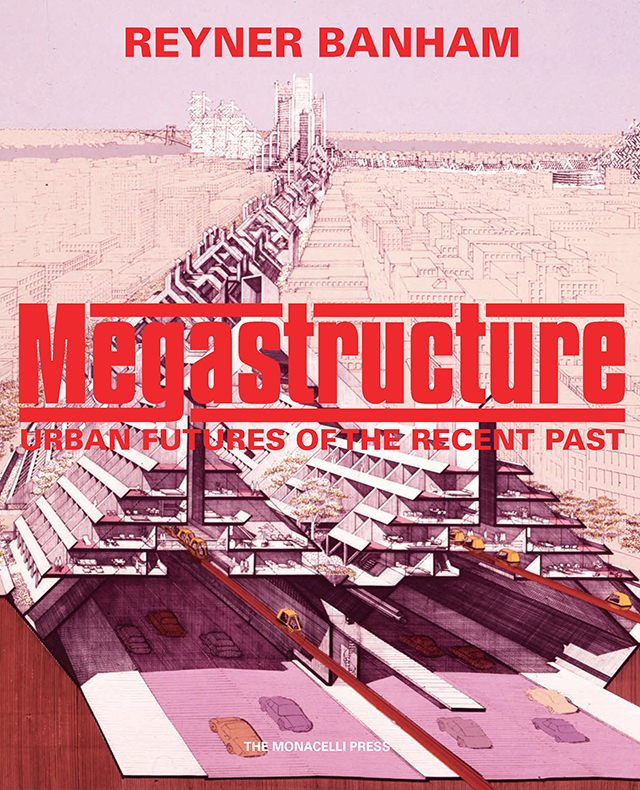 Megastructure: Urban Futures of the Recent Past
Reyner Banham
The Monacelli Press, June 2020

PUBLISHER'S DESCRIPTION:
It is an architectural concept as alluring as it is elusive, as futuristic as it is primordial. Megastructure is what it sounds like: a vastly scaled edifice that can contain potentially countless uses, contexts, and adaptations. Theorized and briefly experimented with in built form in the 1960s, megastructures almost as quickly went out of fashion in the profession. But Reyner Banham’s 1976 book compiled the origin stories and ongoing mythos of this visionary movement, seeking to chart its lively rise, rapid fall, and ongoing meaning.
Now back in print after decades and with original editions fetching well over $100 on the secondary market, Megastructure: Urban Futures of the Recent Past is part of the recent surge in attention to this quixotic form, of which some examples were built but to this day remains–decades after its codification–more of a poetic idea than a real architectural type.
Banham, among the most gifted and incisive architectural critics and historians of his time, sought connections between theoretical origins in Le Corbusier’s more starry-eyed drawings to the flurry of theories by the Japanese Metabolist architects, to less intentional examples in military architecture, industry, infrastructure, and the emerging instances in pop culture and art. Had he written the book a few years later he would find an abundance of examples in speculative art and science fiction cinema, mediums where it continues to provoke wonder to this day.
A long-sought study by an author who combined imagination, wit, and pioneering scholarship, the republication of Megastructure is an opportunity for scholars and laypeople alike to return to the origins of this fantastic urban idea.
REFERRAL LINKS:

dDAB COMMENTARY:
I can't think of anyone who has written as many classic books on architecture as Reyner Banham, particularly considering how few books he wrote. Using Wikipedia as a source, the English critic wrote just eight books that were released between 1960 and 1989 (the last came one year after he died at just 66), but at least three of them are musts in any self-respecting architect's library: Theory and Design in the First Machine Age, his first; Architecture of the Well-tempered Environment, published in 1969; and Los Angeles: The Architecture of Four Ecologies, from 1971. Two more Banham books are also considered important though not indispensable, in part because they have been so damn hard to find: The New Brutalism: Ethic or Aesthetic?, which was published in 1966 and is now going for close to $400 on Amazon; and Megastructure: Urban Futures of the Recent Past, which has just been reissued by The Monacelli Press and is now within the grasp of most architects.
The cover of Megastructure, both the 1976 original and 2020 facsimile, features Paul Rudolph's Lower Manhattan Expressway project of 1970. Banham describes it, in a caption to one of the book's many images, as "a 'mainstream' megastructure if ever there was one." Following from Fumihiko Maki's Investigations in Collective Form from 1964 and other precedents, Banham basically defined a megastructure as an obviously large structure enabling modules to be plugged into it and expanded at will, consisting of multiple functions, and taking on an appearance that denies one singular characteristic or reading. In addition to Rudolph's unbuilt proposal, Banham was drawn to the plug-in, walking, and other fantastical "cities" of Archigram, the work of the Japanese Metabolists, and other architects in the 1960s embracing urban-scaled architecture. The book is exhaustive in its presentation of megastructures, even revealing designs to me that I was unaware of.
What about built megastructures? Banham wrote of megastructures in the past tense, acknowledging that by 1976 the trend was already history. Built examples must have existed, even if less ambitious than Kenzo Tange's Tokyo Bay project or considerably more realistic than Yona Friedman's "space frames in the air." A key comes courtesy of Mary Banham, Reyner's wife and an artist who illustrated his books, most notably the helpful sections and cutaway axons in The Architecture of the Well-tempered Environment. On pages 134 and 135 of Megastructure is a diagram comparing silhouettes of ten megastructures, all realized and all depicted at the same scale. Nine of them float in the white space of the pages, but one of them spans across the bottom of the spread: the George Washington Bridge approach structures. Consisting of a roadway spanned by a bus terminal and four apartment blocks, Banham called the assemblage an "accidental megastructure" with "gigantic dimensions [that] accurately reflect the scale of the architectural ambitions entertained by many deliberate megastructure designers." If Rudolph's Lower Manhattan project is what architects envision when they hear "megastructure," the George Washington Bridge structures is the built reality when something of that size actually happens: architecturally uncoordinated and courtesy a strong hand, in this case "power broker" Robert Moses.
The sole addition in Megastructure's facsimile edition is a foreword by Todd Gannon, the Ohio State professor whose most recent book is about the book on high-tech architecture that Banham was writing at the time of his death and therefore never finished. Gannon's foreword situates Megastructure in Banham's wider oeuvre of books, which balanced aesthetics and technology, and which tended to save overt criticisms for their last chapters. Gannon calls them "melancholy conclusions" and finds the same in Megastructure. But by marking the end of the megastructure trend with the Centre Pompidou in Paris, Banham also marked the beginning of what would become high-tech, whose story Banham unfortunately was unable to tell — melancholy, indeed.
SPREADS: 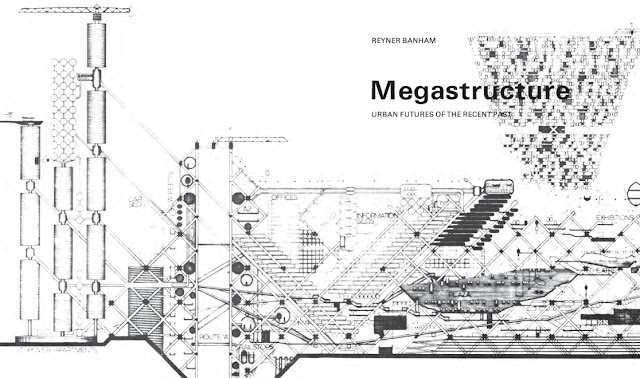 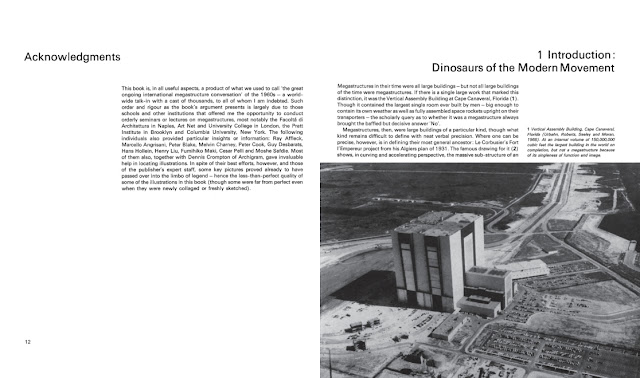 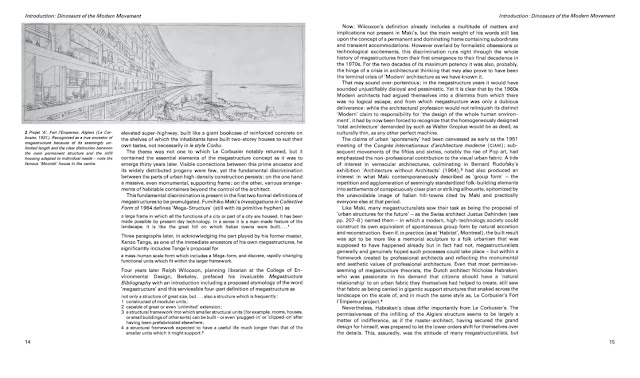 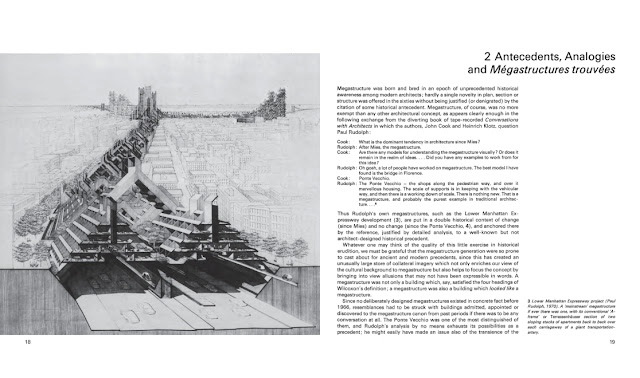