Mirei Shigemori - Rebel in the Garden 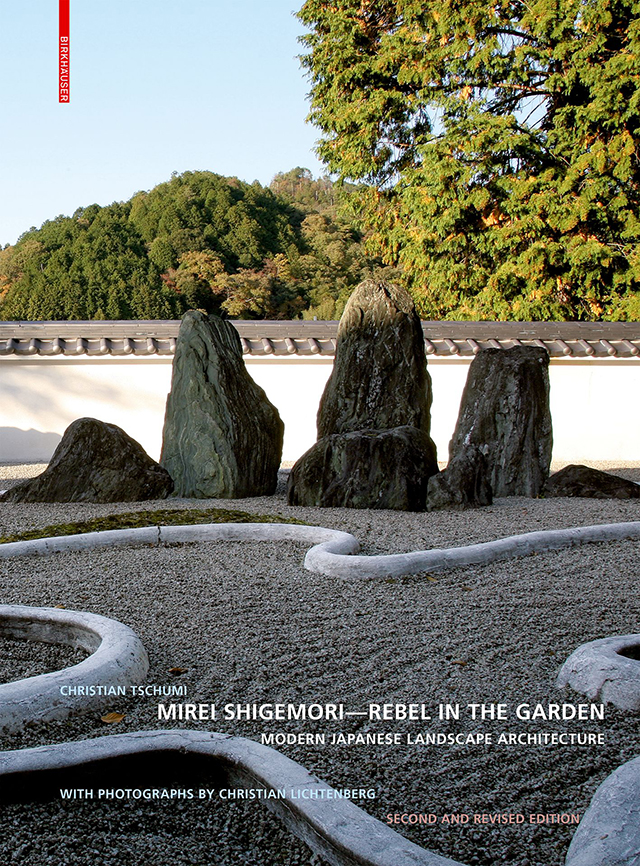 PUBLISHER'S DESCRIPTION:
Mirei Shigemori had a major impact on the development of Japanese landscape architecture in the twentieth century. Active from the 1920s, he founded the Kyoto Garden Society in 1932. In 1939 he designed his own first masterpiece, the garden at the main hall of the Tôfuku-ji temple. From then on he designed 240 gardens all over Japan until his death in 1975; amongst the most famous are the Tenrai-an tea garden (1969) and the Matsuo Taisha garden (1975). The main characteristic of his gardens is that they respect tradition and, at the same time, depart from conventional paradigms by opening up to the influence of Western modernism with its own language. The first part of the book covers Shigemori’s life and factors that influenced his work. The second part contains a detailed illustration of 17 gardens. The book is published as a new and revised edition.
Christian Tschumi is an independent landscape architect who designs a wide range of open spaces and is active as a publisher and juror.
REFERRAL LINKS:

dDAB COMMENTARY:
Crisis, as they say, breeds opportunity. For Mirei Shigemori, the great Japanese garden designer born in 1896, it was a typhoon that hit Kyoto on September 21, 1934, damaging many historic gardens in the former capital of Japan that is now visited mainly for its dense stock of temples and gardens. He realized that no documents existed showing the layouts of most gardens, leading him to wonder how they would be restored properly in the case of future disasters. So starting in 1936 Shigemori traveled throughout Japan, surveying gardens through measured drawings and photographs, and assembling the 26-volume Nihon Teienshi Zukan ("Illustrated Book on the History of the Japanese Garden") that was released between 1936 and 1939.
To Christian Tschumi, who wrote his dissertation on Shigemori and subsequently wrote this indispensable monograph on him, Shigemori's survey of Japanese gardens (yet to be translated into English, unfortunately) is a singular "publication in the field of garden history in Japan." Yet it is only one of 81 publications — a list that also includes a 35-volume update to the survey done in the years before he died in 1976 — that Shigemori produced, while he also designed around 250 gardens, which are what he is better known for. It goes without saying that Shigemori had abundant energy and passion, and he was able to fuse his research with his design skills to be very much in demand during his career. Tschumi's historical monograph — first published in 2007 and released this year in a second, revised edition that is very close to the original — does an excellent job in explaining Shigemori's influence while also thoroughly documenting his best output.
The most famous garden attributed to Shigemori is the Tōfuku-ji Temple Hondo Garden in Kyoto, which he was commissioned for while in the midst of his encyclopedic survey in the second half of the 1930s. Completed in 1939 — the year it occupies in my 100 Years, 100 Landscape Designs — the project consists of four gardens on the four sides of the main temple building, each garden given a different formal flourish: a stone setting, a moss checkerboard, a grid of clipped hedges, and recycled stone foundations arranged astronomically. Like most of his other gardens, Tōfuku-ji is simultaneously traditional and modern.
Working from the 1930s to the 1970s, Shigemori could have gone in a strictly modern direction, or gone the other way and recycled traditional motifs. Even though he never left Japan, he incorporated Western influences to create a synthesis of traditional Japanese gardens, particularly rock gardens, and his own artistic flourishes. In a small section of the book, between the biographical first section and the larger presentation of close to 20 of his 250 gardens, Tschumi provides a list of the 13 traditional and 8 modern design elements Shigemori used a lot, accompanied by illustrations of each. These illustrations are very helpful, and they are indicative of the attention to detail that permeates the whole of this impressive book that remains the best reference in the English language on the life and work of Mirei Shigemori.
SPREADS: 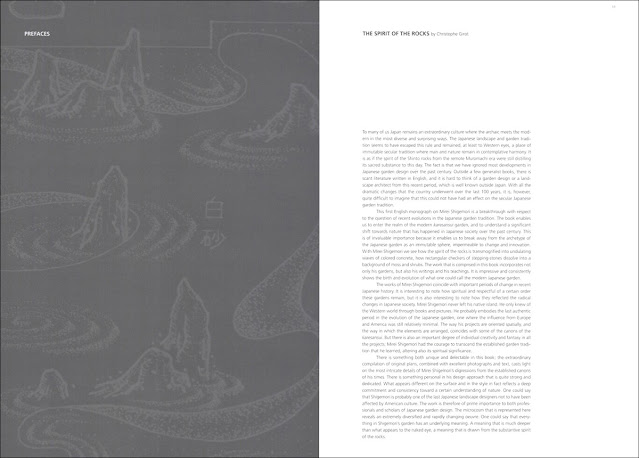 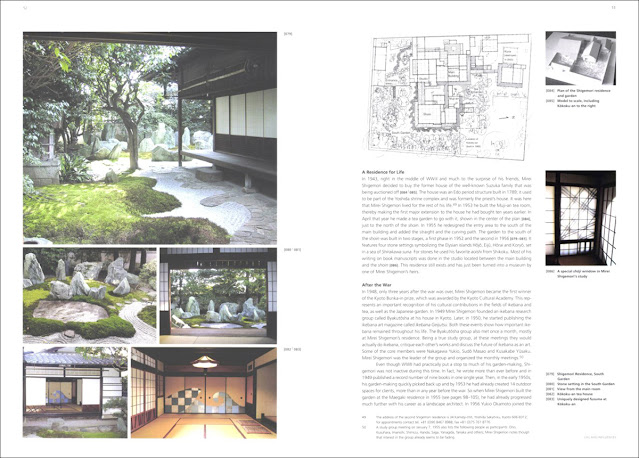 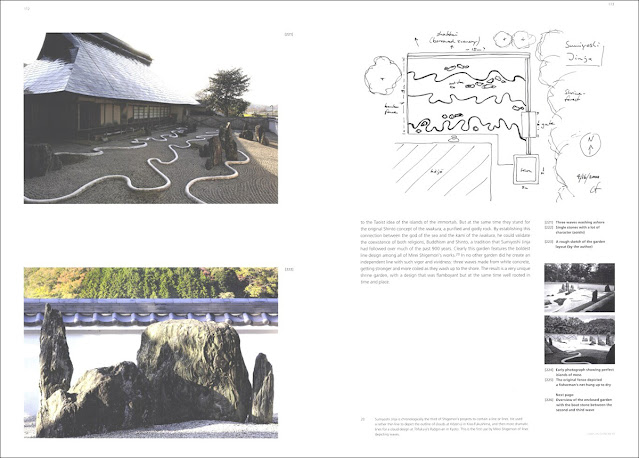 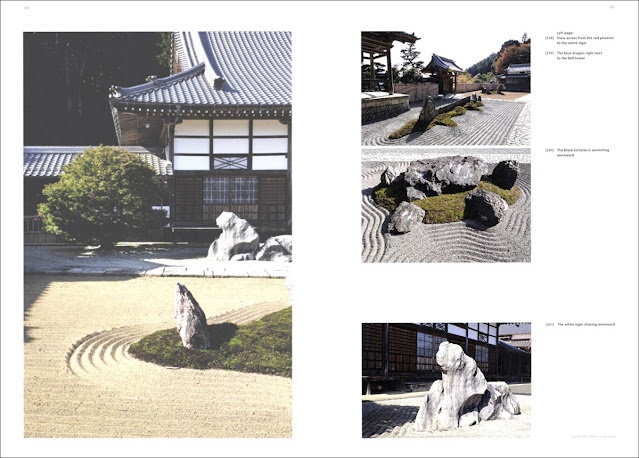