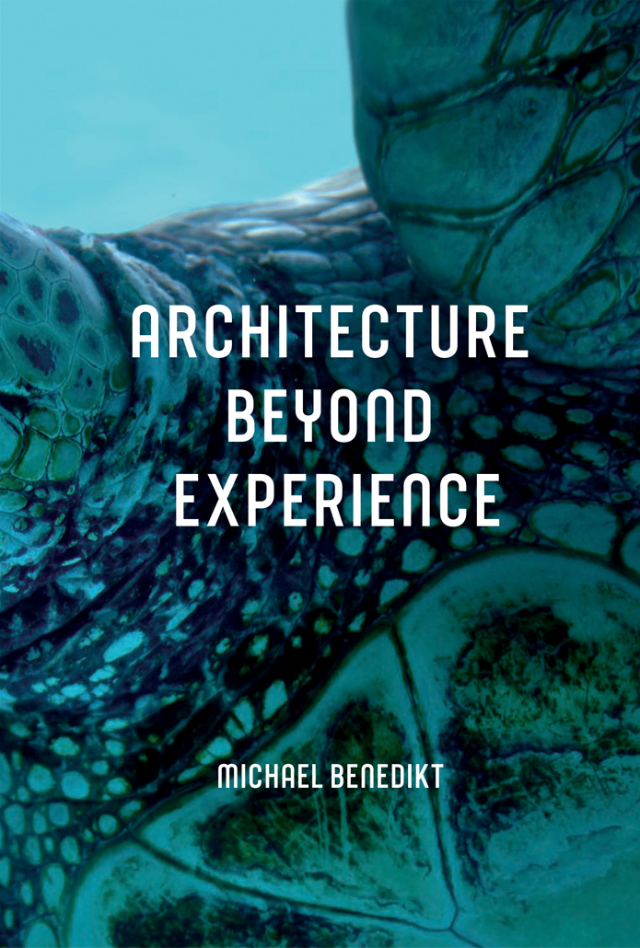 PUBLISHER'S DESCRIPTION:
Architecture Beyond Experience is a work in the service of one goal: the bringing about of a more relational, “posthuman” and yet humanist strain in architecture. It argues against the values that currently guide much architectural production (and the larger economy’s too), which is the making, marketing, and staging of ever more arresting experiences. The result, in architecture, is experientialism: the belief that what gives a building value, aside from fulfilling its shelter functions, is how its views and spaces make us feel as we move around.
The book argues that it’s time to find a deeper basis for making and judging architecture, a basis which is not personal-experience-multiplied, but which is dialogical and relational from the start. It uses the word relational to describe an architecture that guides people in search of encounter with (or avoidance of) each other and that manifests and demonstrates those same desires in its own forms, components, and materials. Buildings are beings. When architecture, they teach as well as protect; they tell us who we were and who we want to be; they exemplify, they deserve respect, invite investment, and reward affection. These are social-relational values, values that both underlie and go beyond experiential ones (sometimes called “phenomenological”). Such relational values have been suppressed, in part because architects have joined the Experience Economy, hardly noticing they have done so. Architecture Beyond Experience provides the argument and the concepts to ultimately re-center a profession.
Michael Benedikt is the Director of the Center for American Architecture and Design (CAAD) at the University of Texas at Austin, where he holds the Hal Box Chair in Urbanism, is an ACSA Distinguished Professor of Architecture, teaches design studio and architectural theory, and directs the school’s Interdisciplinary Studies master’s degree program.
REFERRAL LINKS:

dDAB COMMENTARY:
What happened to Michael Benedikt? When I think of the UTSOA professor, and I'm probably not alone here, is 1992 book For an Architecture of Reality comes to mind. Written in the heyday of PoMo and Decon, the short, illustrated book (or long essay) is an influential phenomenological argument for architecture that is, well, real, not pastiche. But near the beginning of Benedikt's latest book, the many-years-in-the-making Architecture Beyond Experience, he speaks of writing the earlier book "in a previous incarnation" (or something like that; given that the book lacks an index, I can't find the quote). In many ways, the new book is a repudiation of many of Reality's themes, though he's also described Experience as a continuation of his earlier book.
I shouldn't be surprised that Benedikt has shifted course after nearly 30 years, though. For one, around the same time as Reality he edited Cyberspace: First Steps, which I haven't read but digested when he gave a lecture on it when I was in undergraduate architecture school. I recall Benedikt talking about the possibility of an architect using VR goggles to show a client the progress of the design of their future house. But instead of the technology being a step toward a physical building, the immersive model was the end, the product of the architect's design. Three decades later, with VR technology more realistic and games more prevalent and impressive graphically, such a scenario seems more tenable, even though we all still need floors to walk on, roofs over our head, and walls with windows to look out of. (For an illuminating conversation between Benedikt and host Sean Lally on cyberspace and other things, check out the Night White Skies podcast.)
So Benedikt has moved from reality and experience to a position that is beyond experience, in part because experience has been commodified — turned into experiences. In the first of the book's three parts, he addresses the experience economy and then moves into the difference between "I-It" and "I-You" relationships, which are based on the texts of Martin Buber. Basically, these two attitudes are respectively selfish and empathetic, and it's clear by the end which is the preferred mode for a new architecture. These terms are the first of many that the author introduces in a book that is more neuroscience than phenomenology; a glance at the glossary reveals some of the important ones that pepper the book: Isovists, M-branes, Object-Oriented Ontology (OOO), Relationism, and Space Syntax, among many others.
Part two is titled "The Fabric of Glances," another glossary term that refers to the density of relations in space being the supposedly "true medium of social interaction via vision," rather than space itself. In this part Benedikt dives into arrays, isovists, and m-branes, all of them discussed at length and accompanied, thankfully, by diagrams. Like Jack Murphy, in his review of Benedikt's book in Texas Architect, I also appreciate the first chapter in this part, in which the author critiques environment-behavior studies. Both of my undergraduate architecture and graduate urban design educations — at Kansas State University and CUNY, respectively — happened to have strong EB components, the former anchored by David Seamon and the latter through its Environmental Psychology PhD program. Part of me really wants to believe in the effectiveness of EB, but Benedikt capably explains how, even if it were adopted widely (it hasn't since first forming in the 1960s), EB would not be able to move beyond a focus on experiences and a scientifically distanced I-It perspective.
Which leads us to part three, "Architecture Beyond Experience," the meat of the book. Put simply, this part applies the new (for most) terminologies learned in the earlier parts to buildings by Aldo van Eyck (three of the spreads below), Carlo Scarpa, and Louis I. Kahn. (Kahn was one subject of Benedikt's Deconstructing the Kimbell: An Essay on Meaning and Architecture, released around the same time as For an Architecture of Reality.) But these are not simply buildings; they are buildings as beings: "post-human" analyses that prioritize ethics over experience. My understanding of buildings as beings probably stops well short of what it should to fully endorse Benedikt's newfound stance toward architecture, but it's a very intriguing notion: considering buildings like we would other people, or animals, or parts of nature. Now that climate change is clearly the greatest crisis humans will face (and we need to face it now, no matter what politicians say), decisions of whether to demolish and retrofit versus building anew — or building at all — are paramount. Considering buildings as beings might be just what is needed to make those decisions be about ethics and environment rather than economics and experiences.
SPREADS: 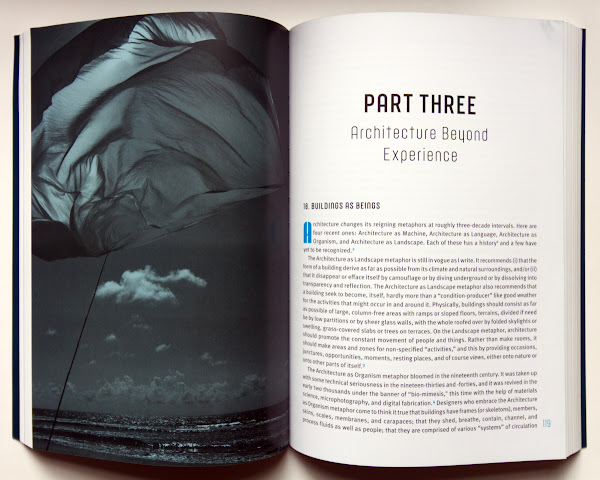 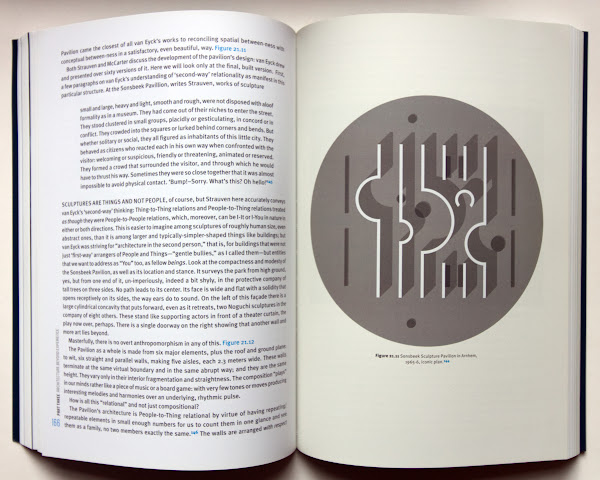 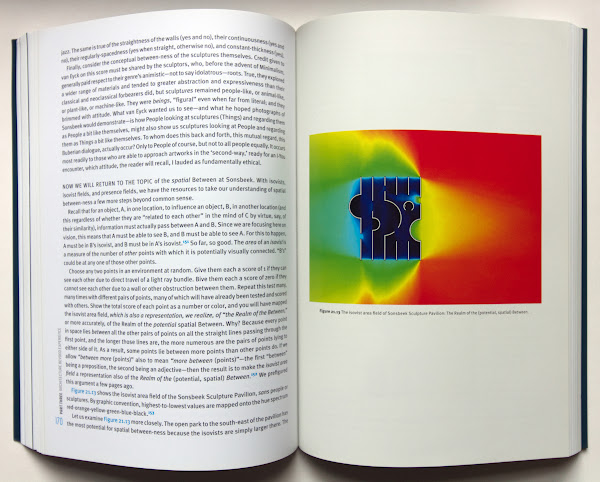 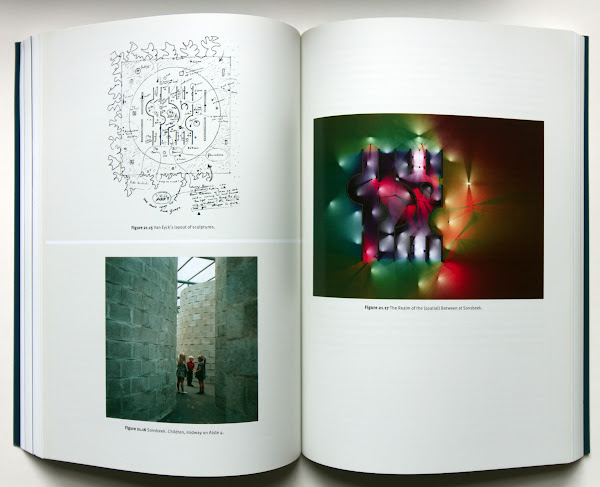