The Architecture of Bathing 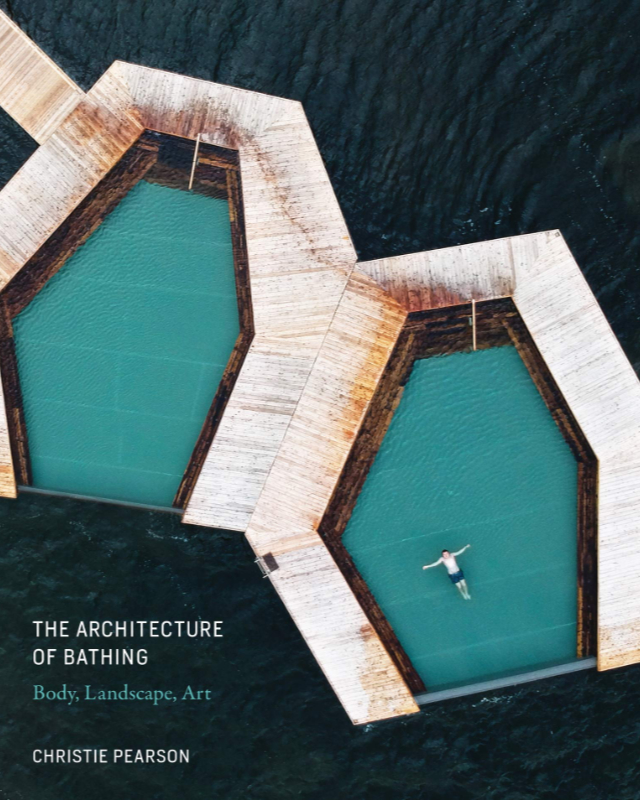 PUBLISHER'S DESCRIPTION:
We enter the public pool, the sauna, or the beach with a heightened awareness of our bodies and the bodies of others. The phenomenology of bathing opens all of our senses toward the physical world entwined with the social, while the history of bathing is one of shared space, in both natural and built environments. In The Architecture of Bathing, Christie Pearson offers a unique examination of communal bathing and its history from the perspective of architecture and landscape. Engagingly written, with more than 260 illustrations, many in color, The Architecture of Bathing offers a celebration of spaces in which public and private, sacred and profane, ritual and habitual, pure and impure, nature and culture commingle.
Pearson takes a wide-ranging view of her subject, drawing on architecture, art, and literary works. Each chapter is structured around an architectural typology and explores an accompanying theme—for example, tub: sensuality; river: flow; waterfall: rejuvenation; and banya: immersion. Offering examples, introducing relevant theory, and recounting personal experiences, Pearson effortlessly combines a practitioner's zest with astonishing erudition. As she examines these forms, we see that they are inextricable from landscapes, bodily practices, and cultural production. Looking more closely, we experience architecture itself as an immersive material and social space, embedded in the interdependent environmental and cultural fabric of our world.
Christie Pearson is an award-winning architect, writer, and urban interventionist. An Adjunct Professor at the University of Waterloo School of Architecture, she is coeditor of the architectural journal Scapegoat.
REFERRAL LINKS:

dDAB COMMENTARY:
In summer 2013, I was fortunate enough to travel with a friend from the city of Zurich to the village of Vals and spend a day inside the famous Therme Vals designed by Peter Zumthor and completed in 1996. That visit happened one year after the Commune of Vals sold the baths and attached hotel to property developer Remo Stoffel, who rebranded it 7132, hired famous architects to design hotel suites, brought in Morphosis to design a new entrance canopy, and audaciously proposed Europe's tallest tower, also designed by Morphosis, to sit next to the baths. Thankfully the 82-story tower was basically dead on arrival, but as noted by Christie Pearson in her book-length exploration of bathing, the sale of the property meant "[the bath] is not longer affordable for the people who live here." In effect, the sale turned Therme Vals from "a space of leisure and rejuvenation for all" to a "spa as a luxury commodity."
Pearson discusses Therme Vals across just three of The Architecture of Bathing's 424 pages. This says to me that the author is not interested predominantly in the design of baths (this is far from a collection of contemporary designs, though the spreads below reveal that they are still found in the book), while her comments about the sale of Therme Vals indicate an interest in bathing as a social activity over anything else. Nevertheless, Zumthor's baths are found in a chapter called "Pool: Play of Volumes," in which Pearson explores the spatial and phenomenological aspects of bathing, moving from James Turrell and other artists to the words of Henri Lefebvre and Steen Eiler Rasmussen, before reaching Vals and then moving onto other people and places, including Zaha Hadid's London Acquatics Center completed for the 2012 Olympics. Space and design are important in The Architecture of Bathing, but so is philosophy, literature, and other fields of study.
Pearson's text mixes sometimes grandiloquent statements about the act of bathing ("Bathing spaces foreground tensions in resistance to and affirmation in life..."), firsthand accounts that transport us to her destinations ("I pack all the towels and swimsuits, pack and repack, water bottle, sunscreen...wait, how many towels? Big or small?"), and general commentary about bathing and other aquatic acts spurred by those visits ("The swimming pool can draw to itself a dozen architectures of bathing within its enclosure..." after a visit to Hadid's building). Pearson's "people's history of bathing," as she calls it in the introduction, is a highly ambitious one. With so many histories, ideas, places, etc. intertwining themselves among chapters that describe venues but also states of mind (e.g., "Sea: Rhythmic Theater" or "Sweat Lodge: Healing Transgressions"), it's easy to get lost or carried away in the aquatic tangle. Thankfully, the index directs readers to places that are subjective ("Taboo") as well as real ("Therme Vals"), which readers will no doubt want to visit after reading the book.
SPREADS: 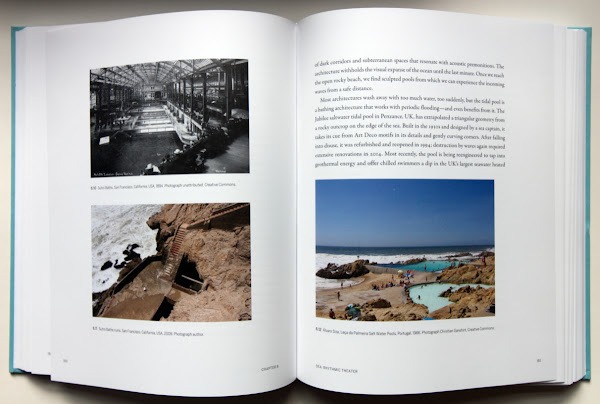 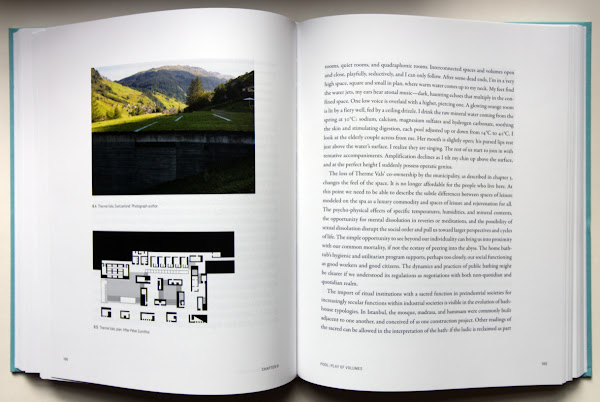 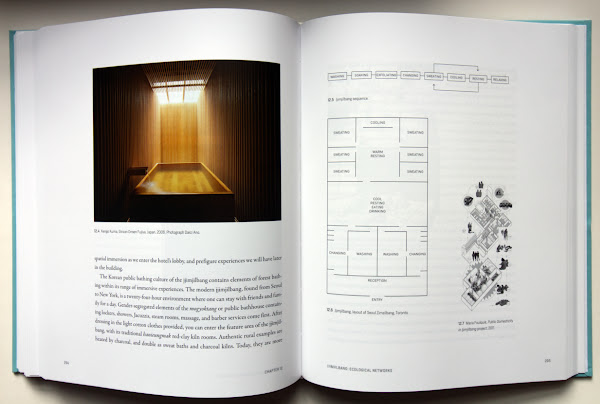 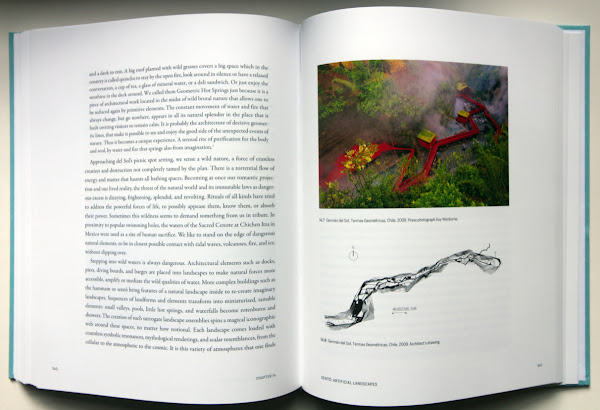