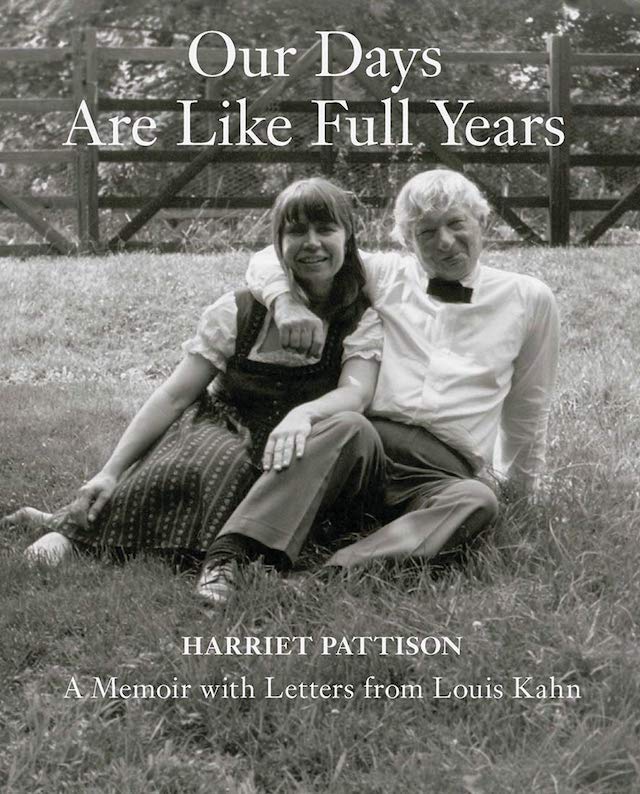 Our Days Are Like Full Years: A Memoir with Letters from Louis Kahn
Harriet Pattison
Yale University Press, October 2020

PUBLISHER'S DESCRIPTION:
On a winter day in 1953, a mysterious man in a sheepskin coat stood out to Harriet Pattison, then a theater student at Yale. She would later learn he was the architect Louis Kahn (1901–1974). This chance encounter served as preamble to a fifteen-year romance, with Pattison becoming the architect’s closest confidante, his intellectual partner, and the mother of his only son.
Here for the first time, Pattison recounts their passionate and sometimes searing relationship. Married and twenty-seven years her senior, Kahn sent her scores of letters—many from far-flung places—until his untimely death. This book weaves together Pattison’s own story with letters, postcards, telegrams, drawings, and photographs that reveal Kahn’s inner life and his architectural thought process, including new insight into some of his greatest works, both built and unbuilt. What emerges is at once a poignant love story and a vivid portrait of a young woman striving to raise a family while forging an artistic path in the shadow of her famous partner.
Harriet Pattison, FASLA, is a distinguished landscape architect. She was Louis Kahn’s romantic partner from 1959 to 1974, and his collaborator on the landscapes of the Kimbell Art Museum, Fort Worth, and the F.D.R. Memorial/Four Freedoms Park, New York. She is the mother of their son, Oscar-nominated filmmaker Nathaniel Kahn.
REFERRAL LINKS:

dDAB COMMENTARY:
About halfway through My Architect, the 2003 documentary by Nathaniel Kahn, the son of Louis I. Kahn and Harriet Pattison, we see a photograph of the couple sitting on the grass. It is the same photo as the cover of Our Days Are Like Full Years, Pattison's remarkable memoir of her fifteen years with Kahn, from 1959 until Kahn's death in 1974. Of course, people who saw the film know Pattison was not the only woman in Kahn's life; he fathered three children with three women, only one of them the wife he never left. The section of the film devoted to Nathaniel's mother — in which she speaks to Nathaniel about their relationship; he visits her friends that offered to adopt her out-of-wedlock child if she could not keep him (she could); he speaks with Harriet's sisters; and he recites a letter she wrote to Lou, as he was apparently called by nearly everyone — is just 8 minutes of the 116-minute film. So for those who watched the film and pined to know more about the relationship between Pattison and Kahn, they will be delighted with Our Days Are Like Full Years.
Every one of those fifteen years is given a chapter in the chronological memoir that is structured in four parts, each covering three or four years. The first part chronicles their fairly brisk relationship after the 30-year-old Pattison briefly met Kahn, 27 years her senior, at a Christmas party in late 1958 and then at another party the following spring; it ends four years later, in 1962, with the birth of Nathaniel. In between are numerous love notes, letters, and sketches from Lou to Harriet: correspondences that litter the whole book. Not all of them are shown as scans of the originals, but all are transcribed for legibility (Kahn's handwriting can be hard to decipher). Pattison apparently saved everything she received from Kahn, be it a postcard with a few lines of text or a napkin sketch he drew of her while they waited for one of his flights. These correspondences comprise a large chunk of the book and, given the book's subtitle, are seen as the book's main draw. There are also many photographs inside — of Harriet, Lou, and others in their lives; and of Kahn's buildings — but most captivating are Pattison's words. Her prose is clear, readable, and full of revealing details that do more than just narrate the letters from Kahn. I can only hope my memory is that sharp when I'm in my 90s, though no doubt keeping the letters from Kahn helped Pattison paint such a clear picture of those distant decades.
Skipping ahead, the last of the book's four parts covers 1971 to 1974 and is titled "The Garden and the Room," a reference to the concept behind the FDR Four Freedoms State Park on Roosevelt Island in New York City. Outside of her appearance in her son's Oscar-nominated documentary, Pattison is most widely known for her landscape designs, something she gravitated to not long after meeting Kahn, having studied theater and philosophy beforehand. Kahn set up an apprenticeship for Pattison with Dan Kiley in 1963 and a couple years later she enrolled at Penn, studying landscape architecture under Ian McHarg. After graduation and a few years in the office of landscape architect George Patton, Pattison contributed to some of Kahn's buildings, most notably the Kimbell Art Museum in Fort Worth and the FDR memorial. The latter is admittedly more landscape than building and as such it's discussed in depth in "1973," the book's penultimate chapter. Pattison writes, "Lou made it clear that we would do this one together from the beginning," though at one point she asked to be put on another job. Nevertheless, by the end of the year the two were together again, designing the memorial that would be approved in January 1974, two months before Kahn died at the age of 73.
Instead of the book ending with Kahn's death in the 1974 chapter, an epilogue jumps forward to October 2012 and the opening ceremony for the FDR Four Freedoms State Park. (Coincidentally, it's the last project in my book NYC Walks: Guide to New Architecture, coming at the end of a ferry tour of Queens and Roosevelt Island.) Here Pattison mentions her son's 2003 film, in which "the man who was Louis Kahn walked the earth again, with all his warmth and struggle." The film also sparked a renewed interest in the FDR memorial, leading to its eventual realization — nearly 40 years after Kahn and Pattison designed it. The "Room" at the tip of the memorial, with one-inch gaps between huge granite blocks, embodies Kahn's assertion of architecture's beginnings: "when the walls parted and the column became." So for Pattison the room she visited that October day was also a beginning, not an end, coming as it does at the end of a very moving memoir.
SPREADS: 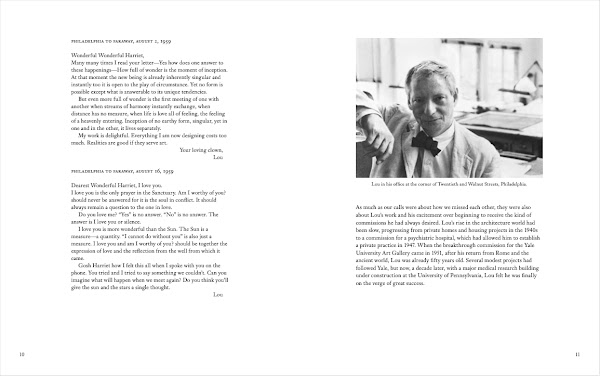 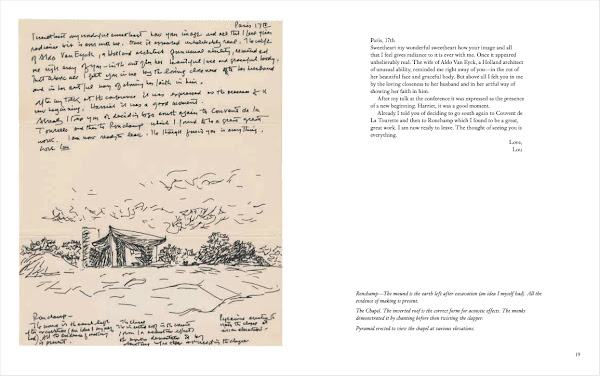 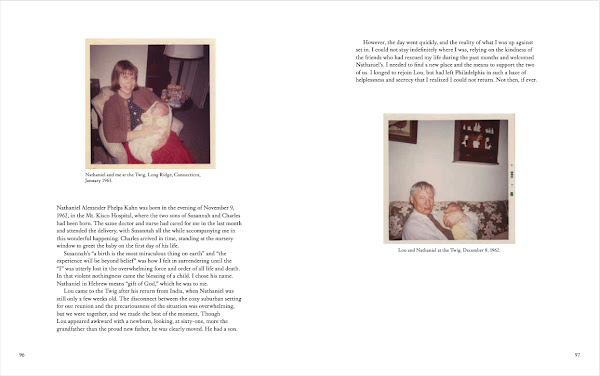 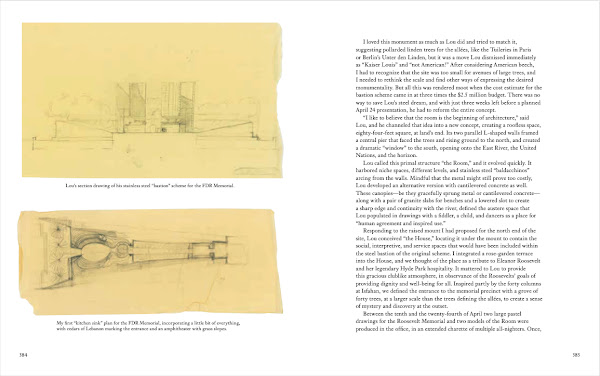 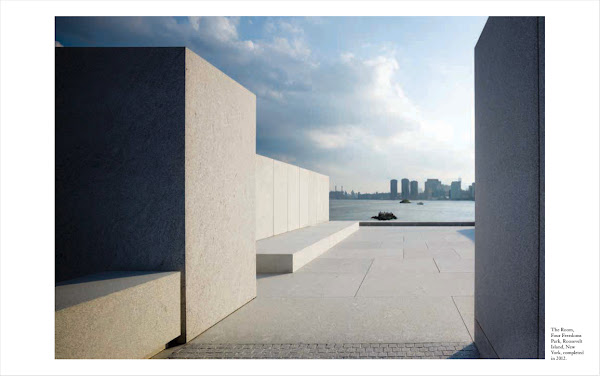