The Queens Nobody Knows 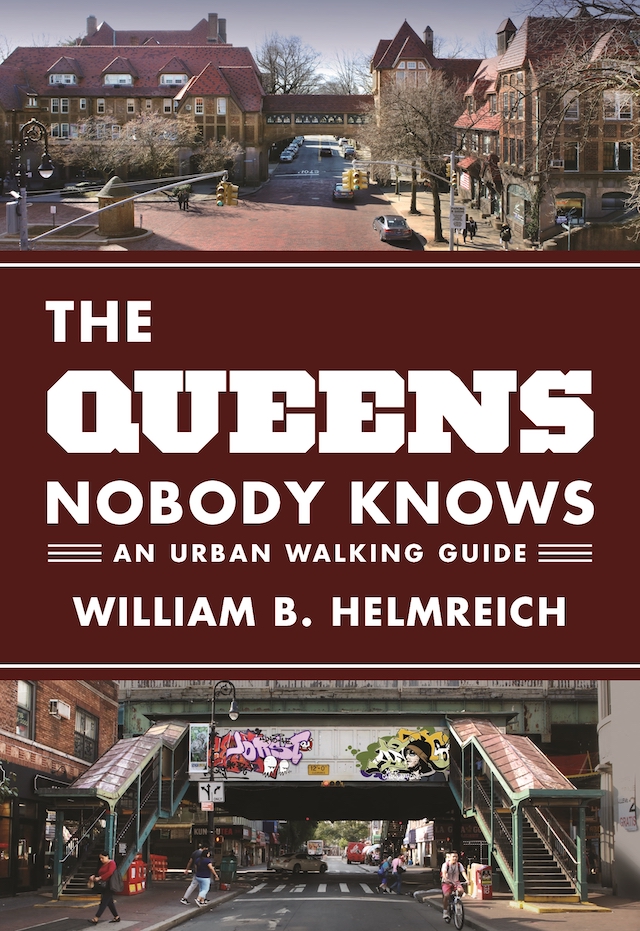 PUBLISHER'S DESCRIPTION:
Bill Helmreich walked every block of New York City—some six-thousand miles—to write the award-winning The New York Nobody Knows. Later, he re-walked most of Queens—1,012 miles in all—to create this one-of-a-kind walking guide to the city’s largest borough, from hauntingly beautiful parks to hidden parts of Flushing’s Chinese community. Drawing on hundreds of conversations he had with residents during his block-by-block journey through this fascinating, diverse, and underexplored borough, Helmreich highlights hundreds of facts and points of interest that you won’t find in any other guide.
In Bellerose, you’ll explore a museum filled with soul-searing artwork created by people with mental illness. In Douglaston, you’ll gaze up in awe at the city’s tallest tree. In Corona, you’ll discover the former synagogue where Madonna lived when she first came to New York. In St. Albans, you’ll see the former homes of jazz greats, including Count Basie, Ella Fitzgerald, and Billie Holiday. In Woodhaven, you’ll walk a block where recent immigrants from Mexico, Guyana, and China all proudly fly the American flag. And much, much more.
William B. Helmreich (1945–2020) was the author of many books, including The Manhattan Nobody Knows, The Brooklyn Nobody Knows, and The New York Nobody Knows: Walking 6,000 Miles in the City, which won the Guides Association of New York Award for Outstanding Achievement in Book Writing. He was Distinguished Professor of Sociology at the City College of New York's Colin Powell School for Civic and Global Leadership and at CUNY Graduate Center.
REFERRAL LINKS:

dDAB COMMENTARY:
Following his widely popular 2013 book The New York Nobody Knows: Walking 6,000 Miles in the City, in which the author recounted the places and interactions from his four-year-long trek of every street in NYC, William B. Helmreich was expanding on each borough with its own standalone guide. Two of them were released — on Brooklyn (2016) and on Manhattan (2018) — before the author succumbed to coronavirus and died in March at the age of 74. The Queens Nobody Knows, no doubt completed before his passing, is the first in the series to be published posthumously, but unfortunately it will probably be the last. For Helmreich, apparently not content to repackage the content from The New York Nobody Knows, walked across all of Queens again for the new book: 1,012 miles, from October 2016 to February 2018, from Little Neck in the northeast corner of the borough to Astoria in the northwest.
Long Island City and Astoria begin the guide (spreads below), and given that I live in Astoria I started with those chapters as well. Familiar with Helmreich's previous walking books, I found no real surprises in the structure of the guide and the tone of his words; the surprises come from the places he features and what he learns about them through conversations. Each neighborhood is given its own chapter with a map keyed to the places he visited and discusses in the text. He includes buildings, some of which are illustrated with photographs, but the guides are really about the people who live in Queens and who opened up to him as he walked each street.
His path in Astoria starts at the base of the bridge leading to Rikers Island, goes past the 365-year-old Lent-Riker-Smith Homestead, and then continues to the nearby Steinway Piano Factory, where he spoke with a couple employees about the famous factory's evolution over 150 years. This industrial corner of Astoria is probably unfamiliar to many of the neighborhood's residents, especially the younger ones who recently moved here and probably spend most of their time exploring the neighborhood by walking up and down Ditmars and other commercial streets. Helmreich walks those streets too, but he focuses on the Greeks, Muslims, and other groups that have made their marks here, touching on the enormous diversity of the borough.
Beyond the sociological emphasis on ethnicity that permeates the book, a primary theme of The Queens Nobody Knows is change. Queens is not exempt from the changes to the physical landscape that Manhattan and Brooklyn get most of the attention for this century. The most dramatic illustrations are found in Long Island City and Astoria; the former has clusters of high-rises around Queensboro Plaza and along the East River, but the latter's spate of new development has been slower and just recently became noticeable.
After walking past the Welling Court murals that are near my home, Helmreich ends the Astoria chapter at another piano factory: the 1886 Sohmer Piano Factory, an impressive landmark that now contains apartments and is being surrounded by residential developments that are reshaping the Astoria waterfront. He does not criticize the new buildings, but he draws the readers' attention to the blocks of intact "homes from long ago," hoping "the proper balance will be struck between what was and what's going up now." At least one development makes me optimistic that a balance is being struck. And who knows, maybe books like this one, which increase appreciation of neighborhoods the way they are, ensure that a balance between old and new is part of what those neighborhoods become.
SPREADS: 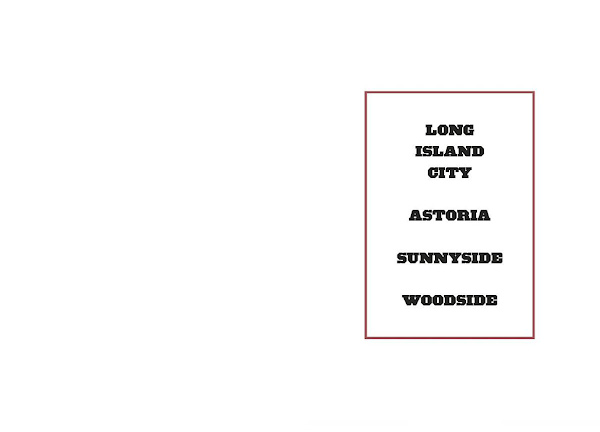 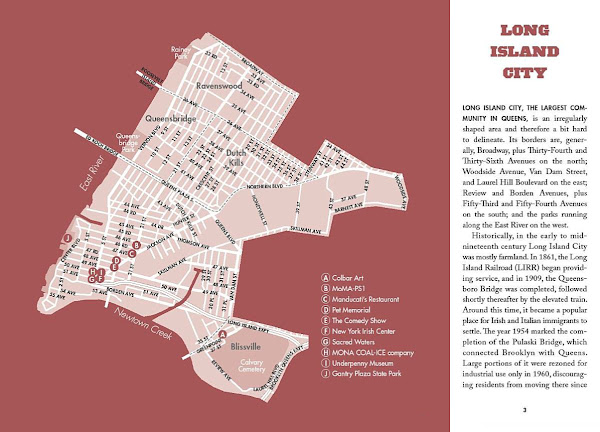 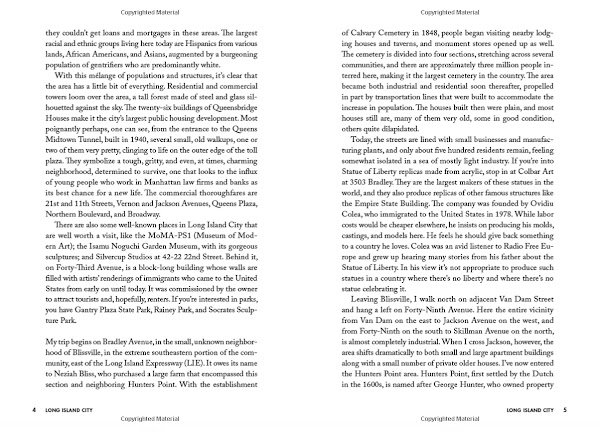 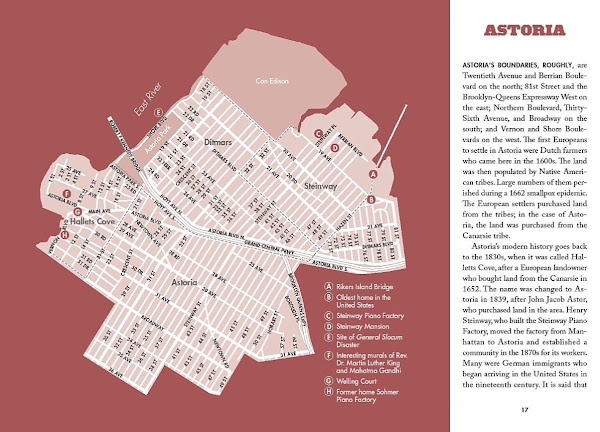