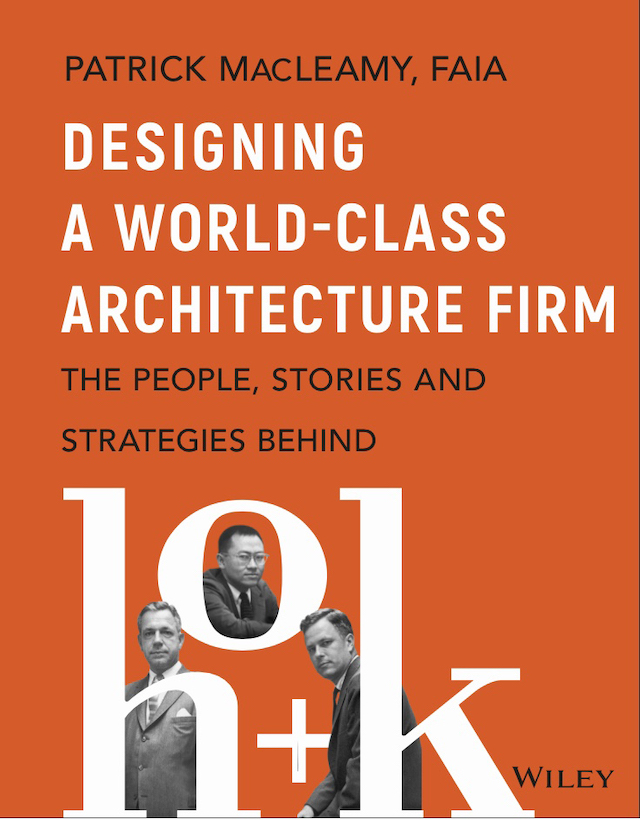 PUBLISHER'S DESCRIPTION:
Designing a World Class Architecture Firm: The People, Stories and Strategies Behind HOK tells the history of one of the largest design firms in the world and draws lessons from it that can help other architects, interior designers, urban planners and creative services professionals grow bigger or better. Former HOK CEO Patrick MacLeamy shares the revolutionary strategies HOK’s founders deployed to create a brand-new type of architecture firm. He pulls no punches, revealing the triple crisis that almost bankrupted HOK and describes how any firm can survive and thrive.
Designing a World Class Architecture Firm tells the inside story of many of HOK’s most iconic buildings, including the National Air and Space Museum, Moscone Convention Center, Oriole Park at Camden Yards, the Houston Galleria and the reimagined LaGuardia Airport. Each chapter conveys lessons learned from HOK’s successes —and failures— including:
MacLeamy delivers his advice via inspirational stories such as how HOK survived when its home office in St. Louis went up in flames and humorous stories, like the time an HOK executive was mistaken for royalty on a trip to Saudi Arabia.  In this tell-all guide, the driven architecture or design professional will find the tools needed to evolve or grow any firm.
Patrick MacLeamy, FAIA, worked his way up from junior designer to CEO of HOK, a global architecture, engineering, and planning firm, where he worked for 50 years. A self-taught executive, MacLeamy loved designing a firm just as much as he loved designing buildings. He is best known in the design and construction industry as the creator of the "MacLeamy Curve," which advocates front-loading effort during the design process to catch errors early. A pioneer in leveraging technology to support design quality, MacLeamy is chairman of buildingSMART International (bSI) where he pushes tirelessly for the global implementation of building information modeling (BIM).
REFERRAL LINKS:

dDAB COMMENTARY:
In a roundup of a dozen architecture books at the end of 1984, New York Times architecture critic Paul Goldberger describes Architecture in the Real World: The Work of HOK by Walter McQuade as "a strained homage to a huge architecture firm — the St. Louis-based Hellmuth, Obata and Kassabaum (HOK) — noted more for its marketing skill than its buildings." The perception of HOK buildings in a less than flattering light, design-wise, can also be found in Architect magazine's "Architect 50" list, most recently done in 2019. HOK checks in at #39 overall, with a score of 83 (the #1 firm sets the baseline of 100). This is a respectable showing on a list that, instead of being focused just on billings, ranks US firms according to three criteria: design, sustainability, and business. Yet, while HOK is #10 on the sustainability list and #32 for business, it's way down at #118 relative to design. When focused squarely on revenue, though, as in Architectural Record's annual list, HOK fares much better, coming in at #6 in 2019.
The above comments are to say that when it comes to books related to HOK, the most valuable ones would not be monographs about their buildings, they would be books focused on the business side of the firm. The ideal HOK book would offer lessons in management and other aspects of running an architecture firm, and perhaps some advice on sustainable design, given their high marks in the Architect 50. This book by Patrick MacLeamy certainly fits the bill, and he sounds like the right person to have done it. MacLeamy served as HOK's CEO from 2003 to 2017, having worked there most of his life, from 1967 until 2017 (he now heads buildingSMART International). But given that HOK has around 1,700 architecture and engineering employees at 23 offices in seven countries, and considering that the average firm size in the United States (per the AIA's Firm Survey Report) is just 12, are MacLeamy's lessons applicable to most architects? Are there many architecture firms out there who want to emulate HOK in terms of growth, acquisitions, and so forth?
Answers to these questions are hinted at in the book's title, Designing a World-Class Architecture Firm, with designing being the important word. Architects design buildings, obviously, using the skills of research, analysis, representation, and construction learned at school and in practice to develop a plan for a project. But applying design to the business-side of a firm is unconventional, to say the least. MacLeamy admits that his passion for designing buildings translated into being passionate about designing a firm when he took the reins of HOK in 2003. Its clearest expression is The Effort Curve, which is also known as the MacLeamy Curve and is discussed at length in one of the book's 29 chapters. Developed around the time he took over as CEO, the chart (fifth image below) overlays a traditional curve illustrating how the most human effort is expended during the documentation phase with a "smart" curve that bumps the increased effort to the earlier phases of programming, design, and development. Two other curves show how the ability to control costs decreases as a building project advances, inverse to the cost of design changes increasing over time. In effect, the MacLeamy Curve is a business-side argument for increasing the time spent on design — certainly a good thing — but it is also a shift born from technologies, most notably BIM, that allow such a dramatic reduction in the documentation phase.
The book's 29 chapters are structured into four chronological sections: "The Founders, 1955–1982," "The Obata Era, 1982–1993," "The Sincoff Era, 1993–2002," and "The MacLeamy Era, 2003-2016." Architects only interested in the more contemporary lessons may jump to the fourth section, but the chapters throughout the book are short and quick, ranging from just a few pages to ten pages. The table of contents breaks down each chapter into the topics that are then clearly titled in orange within each chapter; this organization means readers can easily scan the contents and flip to the part of the book that pertains to their interests. Lastly, each chapter ends with a numbered list of advice on how "to design a world-class firm"; chapter 23, on the MacLeamy Curve, includes advice on making early changes, coordinating with contractors, and using BIM, for example. The book's layout is clear and logical, as are MacLeamy's words, which makes it ideal for a class on professional practice or for architects who are busy designing buildings but still want to improve their management skills.
IMAGES:
Email Post
Labels: technical tuesday wiley