PUBLISHER'S DESCRIPTION:
This book brings together twenty-nine projects from the past ten years, both completed and ongoing, designed by Paris-based h2o Architects. Arranged in thematic categories that stem from the firm’s singular approach to design and architecture, the projects vary greatly in type, scale and individual context, including housing developments in Paris, a hotel in Rio de Janeiro, a temporary school pavilion, a timber construction for a vineyard, the rehabilitation of Paris’s Museum of Modern Art, and other large public spaces. h2o Architectes’ proposals are united by an approach that is always both radical and sensitive, an ethos that emerges here from interviews conducted by architect and writer Fanny Léglise, while essays by architect and anthropologist Miguel Mazeri and architect Bernard Tschumi shed light on various aspects of the firm’s practice, vision, and philosophy. The book also features poems by French writer and poet Frédéric Forte, composed in situ at several of h2o Architectes’ building sites. Photographs, renderings, and plans round out this first comprehensive volume on one of France’s leading up-and-coming architecture firms.
Fanny Léglise is an architect, PhD student and former editor-in-chief of the journal L'Architecture d'Aujourd'hui. Building Paris is a Paris-based art direction and design studio founded by Benoît Santiard and Guillaume Grall. A special focus of their work is on architecture books. h2o architectes, founded by Charlotte Hubert, Jean-Jacques Hubert and Antoine Santiard, is a Paris-based firm working on projects of various types and scales, from housing to public space and cultural facilities.
REFERRAL LINKS:

dDAB COMMENTARY:
The first sentence in Fanny Léglise's introduction to Openings, the new monograph on Paris's h2o architectes, includes a footnote that reads: "The office's name doesn't refer to water." While the author does not explain what it actually refers to, I'm guessing it's a play on the name of the two founding partners, Charlotte Hubert and Jean-Jacques Hubert. Three years later, in 2008, the two H's were joined by Antoine Santiard as a third partner. Since his name is an S and not an O, and the firm is not h2s architectes, the h2o must have been there from the start. While the "o" goes unexplained, its mystery is not a distraction. Nevertheless, this instance of revealing some but not all information pervades the whole monograph, which presents a small fraction of h2o's output and does it in a way that invites the reader to fill in the blanks.
If one word were used to explain the architecture of h2o it would be "context." One of the quotes from the firm, embedded in bold in Léglise's introduction, explains that "architecture is not a thing that can be removed from its context: no project can be transplanted." One of the gaps in the book is the omission of a table of contents; in its place the introductory essay points readers to relevant pages in the book's projects section. The paragraph with this quote leads readers to the Attentiveness chapter, which includes a day care extension inserted into a small residential courtyard, the restoration of a landmark hotel in Rio de Janeiro, and a curving bench designed for Place de la Madeleine in Paris (first three spreads below, respectively). The following project chapters reveal other considerations — Friction, Complexity, Dwelling, Coherence, Meaning, Latitudes — but the idea of architecture as a response to existing places, be they buildings or urban spaces, is persistent, especially in the firm's many adaptive reuse projects.
One of the more unexpected projects appears in the Friction chapter: Micro-Folie, a reproducible prototype initially installed in suburban Paris. Clearly the bright red structure and skin recall the folies of Bernard Tschumi's Parc de la Villette. This is no accident, given that the text clearly explains how the project was "based on the specifications drawn up by Bernard Tschumi," plus the fact Jean-Jacques Hubert and Antoine Santiard were employed in Tschumi's office previous to starting h2o in 2005. (h2o's website also includes the firm's refurbishment of one of the folies.) Tschumi's name is found on the cover of the book and his contribution appears in the back of the book, right before the index. His short "A fable" text describes h2o's work as "tactical," stating: "The particularly of the approach of this team is its frequent focus on an existing problem requiring a site-specific solution." Just about all architects would describe their work in a similar manner, but the appeal of h2o's projects is the diversity of those solutions, many of which are so beholden by context they disappear rather than make bold statements.
Tschumi's brief contribution follows a handful of poet Frédéric Forte's Spaces: rhumbs, another surprise in the book and one clearly aligned with the notion of gaps filled in by readers. Forte's rhumbs are made up of lines of poetry that radiate from a center, each one following the directions of a compass. For Openings he stood in spaces in several h2o's projects and described the vistas in eight directions: north, south, east, west, and the angled midpoints between them. The length of each line corresponds to the depth of each vista, such that the resulting irregular "star" explains the space in words but also form. Like this monograph, which can be read in many ways, there is no prescriptive order to reading the lines in the rhumbs; the reader learns about the spaces described in the rhumbs through the context of each line and their totality. Put another way, context trumps order — a fitting hierarchy for this monograph and the work of h2o architectes.
SPREADS: 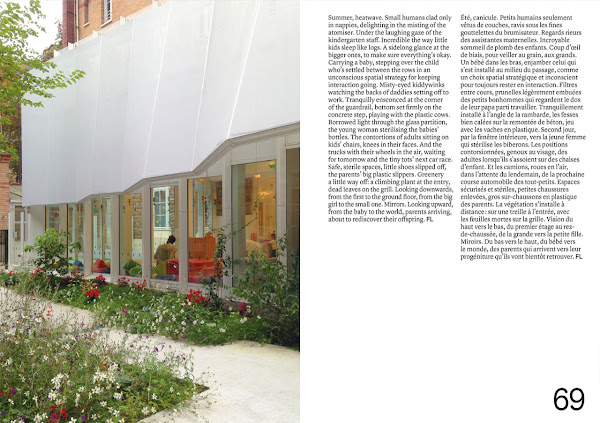 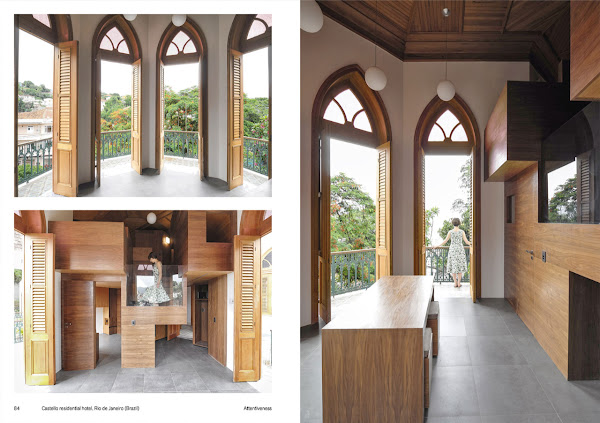 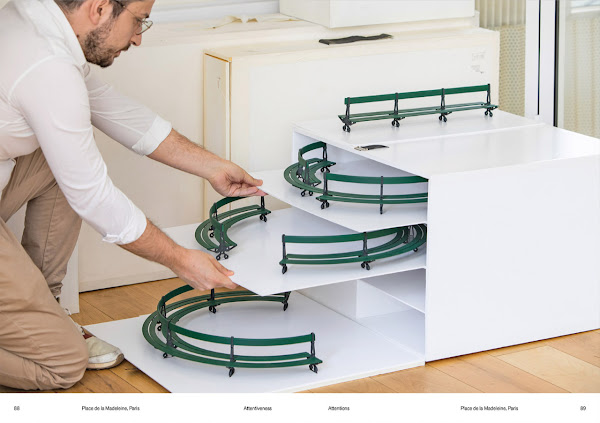 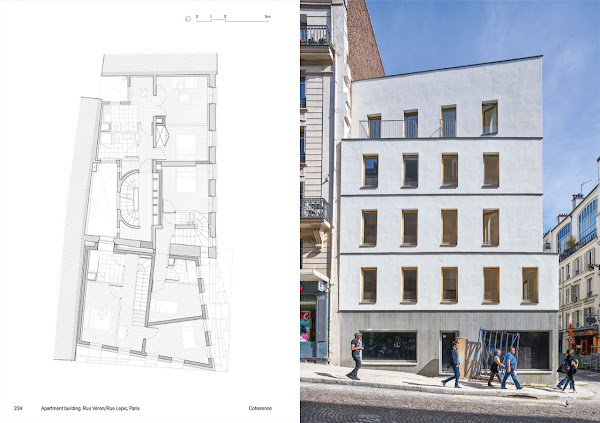 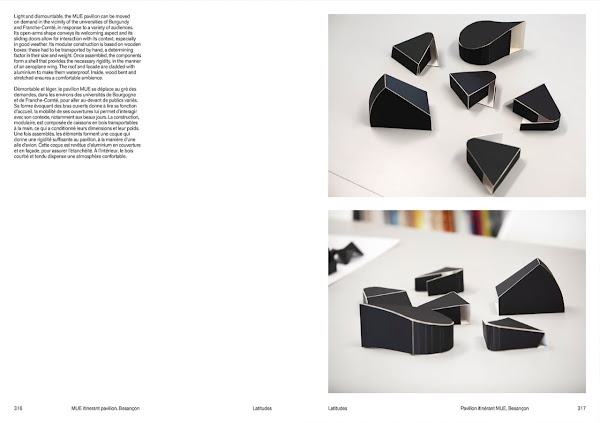