The Architecture of Fantasy 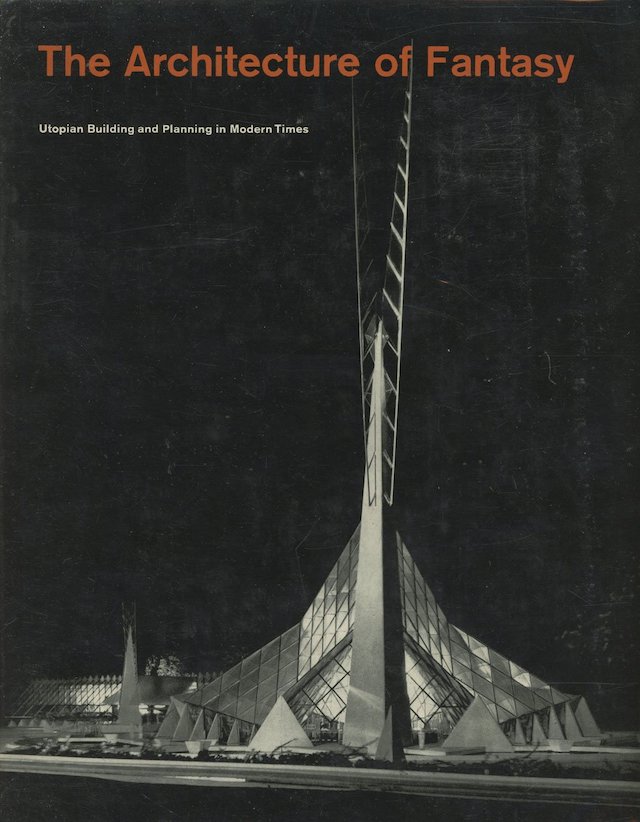 PUBLISHER'S DESCRIPTION:
This book presents — for the first time in English — a copiously illustrated study of architectural fantasy in the modern world. Here in one volume is a selection of the unusual and the visionary in twentieth-century architecture, a fascinating record of the varieties in form, geometry, material, and imagery out of which architectural fantasy is spun.
In recent years, architects and city planners have become increasingly sensitive to the charge of rigidity, plainness, and banality that was so often leveled against their work in the past. Today one sees a great, and sometimes frenetic, effort on the part of contemporary designers to inject more excitement and freedom into their projects.
The purpose of this volume is to show that twentieth-century architecture actually has a tradition of more daring and imaginative structure, form, and symbol than is generally supposed. The authors demonstrate the legitimacy of the works of human and technological fantasy, and trace the genealogy of modern utopian building back to the engineering triumphs and poetic aspirations that characterized imaginative building in the last century.
The principal argument of the book is that the fire of Expressionism that blazed in Europe after World War — first quenched by the sobering influence of the Bauhaus, De Stijl, and Purism, and then ruthlessly stamped out by the totalitarian regimes — has flared up again in our own day. The authors analyze the utopian designs and prophetic statements of the Berlin Expressionists, and provide a wealth of documentary material on them and other architects never before available in English.
Ulrich Conrads, a graduate of the University of Marburg, has studied history of art, archaeology, and literature. A frequent contributor to periodicals in the fields of art and architecture, he is editor-in-chief of Bauwelt, the German professional building magazine. Hans G. Sperlich has studied history of art and architecture at the universities of Hannover and Goettingen. He is custodian of the Kunsthalle in Darmstadt and visiting professor at the Building Academy in Ulm. Christiane C. Collins, a graduate of Carleton College and Columbia University, is an art historian and translator. She is joined in editing of this volume by her husband, George R. Collins, who is Professor of Art History at Columbia University and author of a book on Antonio Gaudi.
REFERRAL LINKS:

dDAB COMMENTARY:
Programs and Manifestoes on 20th-Century Architecture has been an important book, I'm guessing, for many architecture students. For me it was a much-used resource in the multiple history of modern architecture classes I took in undergrad. Edited by Ulrich Conrads, it collects the most important statements on modern architecture: 68 pieces, from Henry van de Velde's "Programme" in 1903 to some essays written shortly before the book's publication in 1964 (an English translation of the German original followed in 1970). Four years before Programs and Manifestoes was released, Ulrich wrote, with Hans G. Sperlich, The Architecture of Fantasy, an abundantly illustrated collection of projects departing from the International Style modernism that had taken over modern architecture by the 1960s. The authors wanted to remind people, many of them anew, about the expressionistic designs that emerged around the same time as the simple forms often associated with modernism.
Connecting the two books, beyond just Conrads' name, is the presence of primary texts. They make up the whole of Programs and Manifestoes, but in Fantasy they are relegated to the third of the book's three main sections. These "Documents," some of which would resurface later in the other book, reference the second section, "Illustrations," and its 100 glossy pages with b/w photos and drawings. The first section, "The Architecture of Fantasy," is the authors' 20-page text on the themes uniting the diverse range of talent and designs on display in the book. Utopia, obviously given the book's subtitle, is a key theme, one spelled out by the authors but more convincingly found in the drawings by Bruno Taut, Antonio Sant'Elia, Frederick J. Kiesler, and many others. At the time, the designs collected in the book were not widely disseminated, but six decades later they are much more well known, if still overshadowed by the lingering impact of the International Style, both on scholarship and the built environment.
The first edition of The Architecture of Fantasy was released in 1960, in German, with the English translation following two years later. Christiane and George Collins did not simply translate the text, though, they greatly expanded it through their own contributions. (Major additions/revisions are highlighted with "(cc/gc)" in the text.) The first evidence of their hand is found at the start of the "Illustrated" section, where they inserted a few pages on Antoni Gaudí. At the time, there was little on Gaudi in English, but George Collins had just wrapped up his monograph on Gaudí, part of the multi-volume Masters of World Architecture series (George Braziller, 1960); it was the most in-depth English text on the Catalan architect at the time. Just as GC's monograph on Gaudí features voluminous notes, CC and GC's "Notes to the Text and Illustrations," coming right after the "Documents" section, are lengthy and thorough. This section is helpful to scholars, who like clear and deep sources, but it also frees up space in the "Illustrations" section, maintaining the original's strong focus on the Utopian imagery. 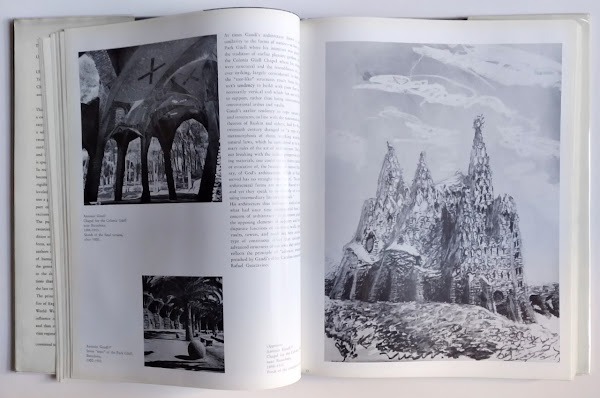 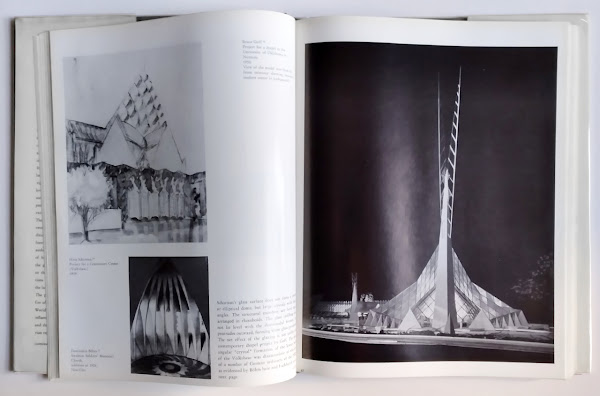 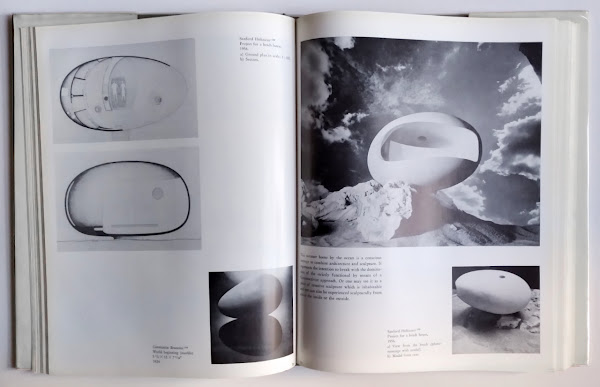 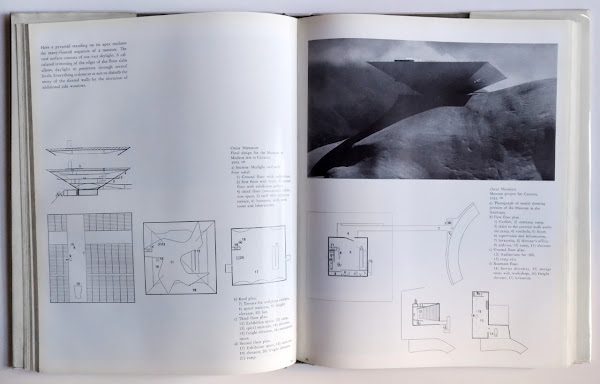 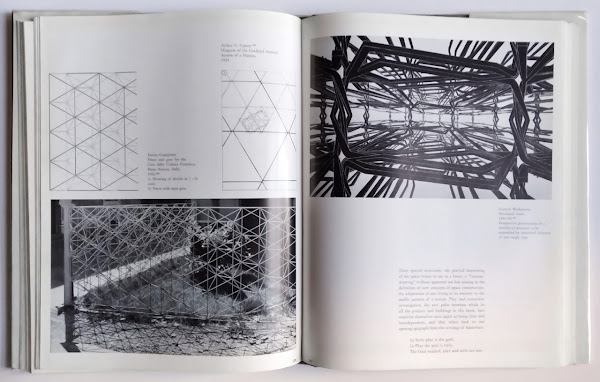 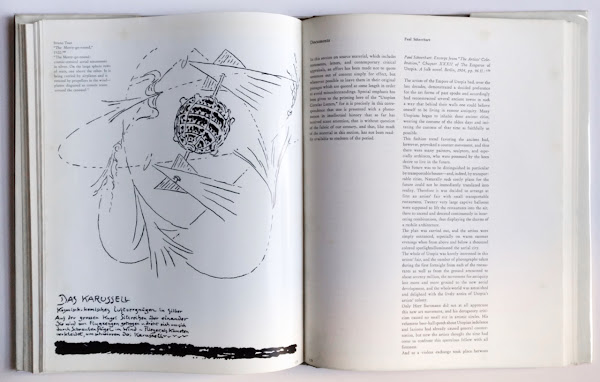