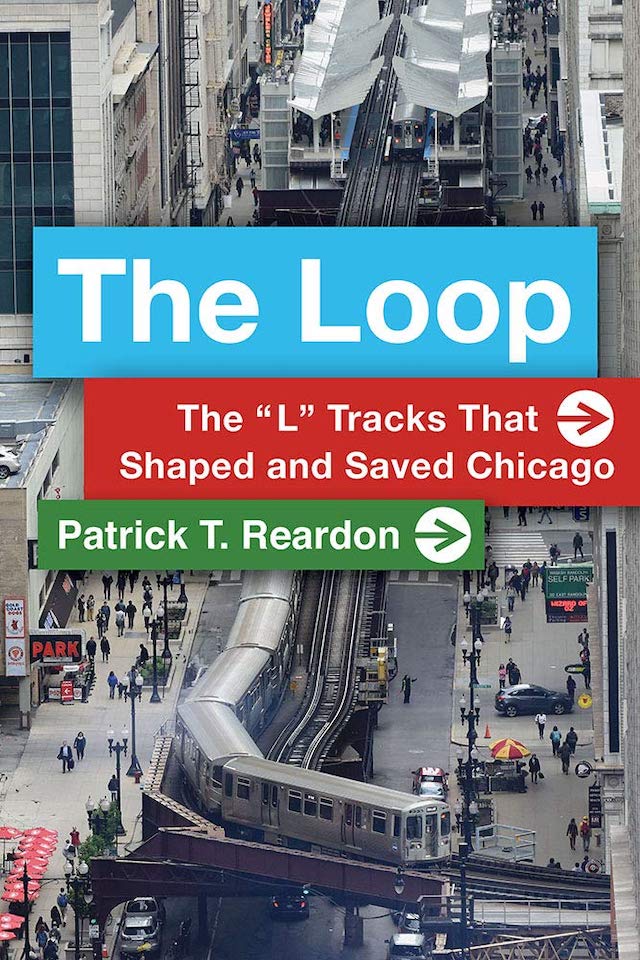 PUBLISHER'S DESCRIPTION:
Every day Chicagoans rely on the loop of elevated train tracks to get to their jobs, classrooms, or homes in the city’s downtown. But how much do they know about the single most important structure in the history of the Windy City? In engagingly brisk prose, Patrick T. Reardon unfolds the fascinating story about how Chicago’s elevated Loop was built, gave its name to the downtown, helped unify the city, saved the city’s economy, and was itself saved from destruction in the 1970s.
This unique volume combines urban history, biography, engineering, architecture, transportation, culture, and politics to explore the elevated Loop’s impact on the city’s development and economy and on the way Chicagoans see themselves. The Loop rooted Chicago’s downtown in a way unknown in other cities, and it protected that area—and the city itself—from the full effects of suburbanization during the second half of the twentieth century. Masses of data underlie new insights into what has made Chicago’s downtown, and the city as a whole, tick.
The Loop features a cast of colorful Chicagoans, such as legendary lawyer Clarence Darrow, poet Edgar Lee Masters, mayor Richard J. Daley, and the notorious Gray Wolves of the Chicago City Council. Charles T. Yerkes, an often-demonized figure, is shown as a visionary urban planner, and engineer John Alexander Low Waddell, a world-renowned bridge creator, is introduced to Chicagoans as the designer of their urban railway.
For more than three decades Patrick T. Reardon was an urban affairs writer, a feature writer, a columnist, and an editor for the Chicago Tribune. In 2000 he was one of a team of 50 staff members who won a Pulitzer Prize for explanatory reporting. Now a freelance writer and poet, he has contributed chapters to several books and is the author of Faith Stripped to Its Essence.
REFERRAL LINKS:

dDAB COMMENTARY:
The photograph on the cover of The Loop looks south along Wabash Avenue from where the "L" bends west on Lake Street. This is one of four corners in the Loop section of the "L" — 2.1 miles ringing 35 blocks — and a substantial vista of a piece of infrastructure that's impossible to see in its entirety.
An almost identical view is on the first page of the "Public Transportation" chapter in the relatively obscure book Chicago Public Works: A History, which was put together by the City of Chicago's Department of Public Works under Mayor Richard J. Daley and published by Rand McNally in 1973. In that year the "L" was far from celebrated. The caption to the photograph, taken in 1972, echoes this sentiment: "Soon to be a part of history books and memories, the Loop Elevated will be replaced within the decade of the 70s by a unique central area transit system ... [that will] give Chicago a coordination of transportation modes unique in the nation."
Obvious to anyone who has stepped foot in the Loop since the 1970s, transit plans ambitious and audacious enough to pull down the "L" never materialized. If anything, the "L" has become more celebrated in the decades since. Even though the steel-wheeled trains running on steel tracks are loud and the outdoor platforms offer little respite from the cold during Chicago's winters, the pleasures of looking at the city while venturing to and from downtown, and peering into buildings from a few stories up, are undeniable. Investment has paralleled appreciation this century, as the city added a new line, the Pink Line, and has built or renovated a number of its stations, including the Washington/Wabash station in the Loop.
A chapter near the end of former Chicago Tribune reporter Patrick T. Reardon's The Loop tells the story of the fight over the Loop portion of the "L" in the 1970s. But as revealed in the "Raze the Loop" chapter, the calls for demolition started much earlier: in 1927, for instance, a "unified transportation system" was proposed, with the provision of removing the elevated structure. Reardon lists numerous plans that would have led to razing the "L" in the ensuing decades, their frequency increasing toward the early 1970s. The elevated structure "was on borrowed time, on its way out," he writes.
If Richard J. Daley and his successor, Michael A. Bilandic, were on the losing side of the fight, the heroes in the story were the Tribune's Paul Gapp, who threw a wrench in Daley's plans by running a story highlighting the negative impacts of demolition, and architect Harry Weese, who filed, with Inland Architect editor Judith Kiriazis, a nomination to add the "L" to the National Register of Historic Places. The nomination brought attention to the positive aspects of the structure through stories in the Tribune and Chicago Reader, but most importantly it delayed any action on the part of the city until after the mayoral election of 1979, when Jane Byrne upset Bilandic by beating him in the Democratic primary. Soon after taking office she abandoned plans for the proposed subways and put into motion work that strengthened the existing "L" infrastructure.
The story over the Loop elevated in the 1970s is told by Reardon with a good deal more detail that what I sketched above. The same applies to the preceding 14 chapters that cover the 75-plus years leading up to that decade's battle. The Loop is not simply a history of how this piece of transit infrastructure came to be — there are other books that already told that story — as it is focused on the downtown portion of the elevated structure and the significance the "L" has had on the city's development. The book's last chapter, "The Loop, New Year's Day 2019," brings Reardon's account close to the present, when his focus shifts from the 2.1-mile elevated structure itself to the festivities that took place the night before in and around the Loop. He paints a picture of a lively downtown anchored by the looping "L" tracks. It makes one believe Chicago wouldn't have the Loop without the "L" — and without the Loop, there's no Chicago.
Email Post
Labels: history-theory thursday