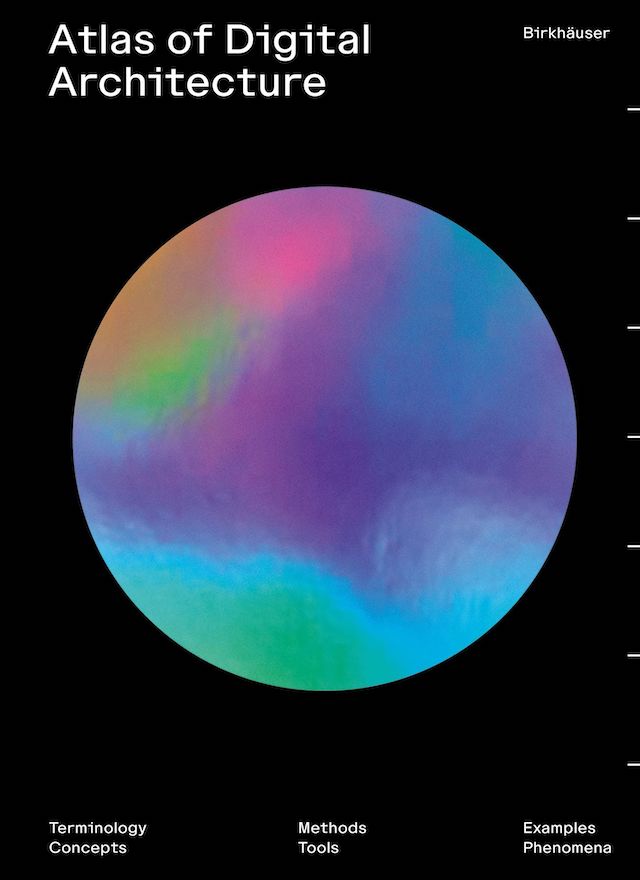 BOOK DESCRIPTION:
Digital technology and architecture have become inseparable, with new approaches and methodologies not just affecting the workflows and practice of architects, but shaping the very character of architecture. In this compendious work, two dozen university professors and lecturers share their vast range of expertise with a professional writer who assembles this into an array of engaging, episodic chapters.
Structured into six parts, the Atlas offers an orientation to the myriad ways in which computers are used in architecture today, such as: 3D Modelling and CAD; Rendering and Visualisation; Scripting, Typography, Text & Code; Digital Manufacturing and Model Making; GIS, BIM, Simulation, and Big Data & Machine Learning, to name but these.
Throughout, the Atlas provides both a historical perspective and a conceptual outlook to convey a sense of continuity between past, present, and future; and going beyond the confines of the traditional textbook, it also postulates a theoretical framework for architecture in the 21st century. The Atlas of Digital Architecture then understands itself as an invitation to the rich feast of possibilities and professional profiles that digital technology puts on the table today, and hopes to whet the reader’s appetite for exploring and sampling their great potential.
Sebastian Michael thinks, writes, and creates across disciplines in theatre, film, video, print, and online with a deepening interest in humans, the universe, and a quantum philosophy. Ludger Hovestadt is Professor of Architecture and CAAD at the chair of Digital Architectonics, Institute for Technology in Architecture, ETH Zürich. Urs Leonhard Hirschberg is Professor for the Representation of Architecture and New Media and Head of the Institute of Architecture and Media (IAM) at Graz University of Technology (TU Graz). Oliver Fritz is Professor for Digital Media and Architectural Representation at HTWG Konstanz University of Applied Sciences.
REFERRAL LINKS:

dDAB COMMENTARY:
In my "book brief" on the 2013 reprint of Sigfried Giedeon's classic 1948 book Mechanization Takes Command — an "anonymous history" of technology then taking hold of every aspect of people's lives — I asked rhetorically if someone has written a history of computers doing the same thing. I didn't know of such a book at the time, but Atlas of Digital Architecture is as close to a digital Giedion as I am aware of now, even though it's geared to architects rather than society in general. Just as Giedion traced the 20th-century changes in producing foods, manufacturing goods, sitting, bathing, cooking, and so forth, the editors of Atlas of Digital Architecture present every conceivable way architects use computers. Readers see where we are now, with BIM and parametricism and digital fabrication, but they also see how we got to this point.
Although the ambitious Atlas does not resemble a traditional atlas, it is not structured like a dictionary or encyclopedia either. With 760 large-format pages and almost as many illustrations, the book is clearly a reference rather than something to be read cover to cover. So how to read it? A chapter gallery starts the book, giving users a visual means of mentally structuring the book's six sections and two-dozen contributions. Architects or students interested in 3d modeling, for instance, can easily find the parts of the book with relevant content, while those who want to learn about code — and learn a little coding in the process — can see where to go. With most contributions around twenty pages long, the best way to tackle the book is to find a subject-essay of interest and digest it in its entirety.
An example: "Visualization" is one of three chapters in the second section, "The Image: Visualizing Architecture." Written by Dominik Lengyel and Philipp Schaerer, the essay starts — as do all of them in the book — with an overview of its subject, in this case a brief history of architectural visualization in a couple columns of text. This history gives way to "visualizing now," which the authors carefully fit somewhere between 3d modeling and rendering, two topics that are covered in other chapters. With Lengyel, "we find ourselves at the intersection of archaeology, architecture, and photography," whereas with Schaerer, of Bildbauten fame, "we find ourselves at the intersection of architecture, photography, and design." So the authors' text and image selection balance these respective poles of reconstructing and imagining through visualization. As in other essays, the text is keyed to chapters and terms throughout the book, creating another way of navigating the book, while the images are presented as thumbnails between the text and larger at the end of the essay (this increases the flow of text but requires a good deal of flipping back and forth between pages). The pair's essay ends, like most in the book, with an outlook: some thoughts on the future of visualization and the potential virtual reality of all things, be they from the past, present, or future.
What ties this massive book together, besides the design elements (by Onlab) described in the Visualization chapter above and shown in the spreads below, is the text, which was written entirely by Sebastian Michael. But if Lengyel and Schaerer wrote their chapter, how is that the case? As Michael describes in the book's preface, the collaborators sent him their abstracts (per the editors' guidelines) and then, after a one- to two-hour interview with them, Michael would write their chapter. Some back-and-forth logically followed that process, but the result is a readable text, in English (even though many of the contributors are German, as are many references cited); it is consistent in tone and language but also highly accessible. It's a bit like Giedion's nearly 75-year-old Mechanization book, except that Atlas is the product of two-dozen experts, three editors, one writer, one design firm — and the unlimited possibilities of computers.
SPREADS: 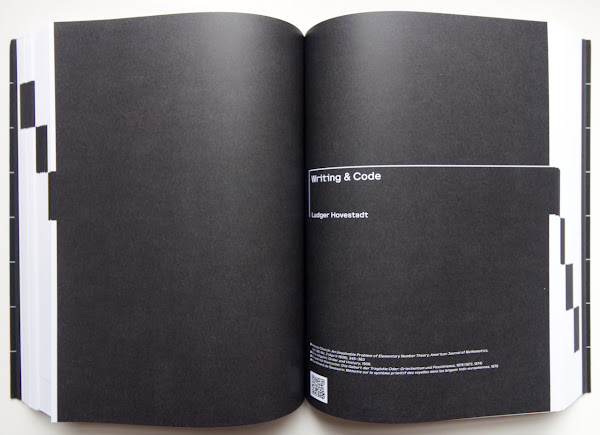 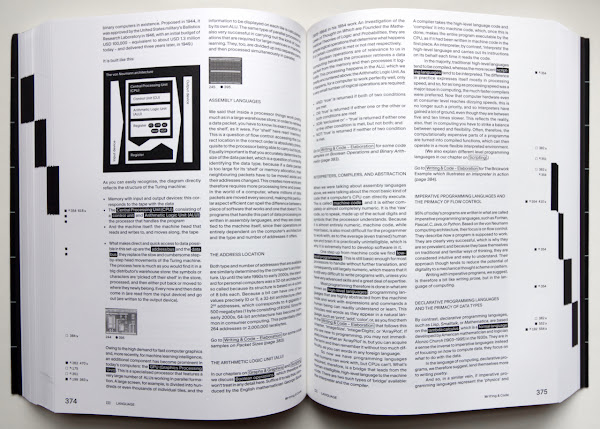 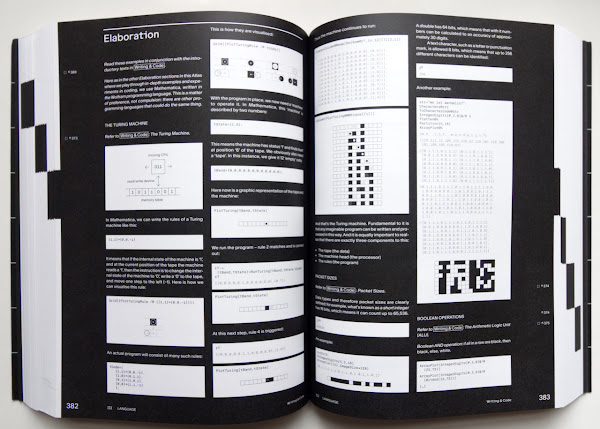 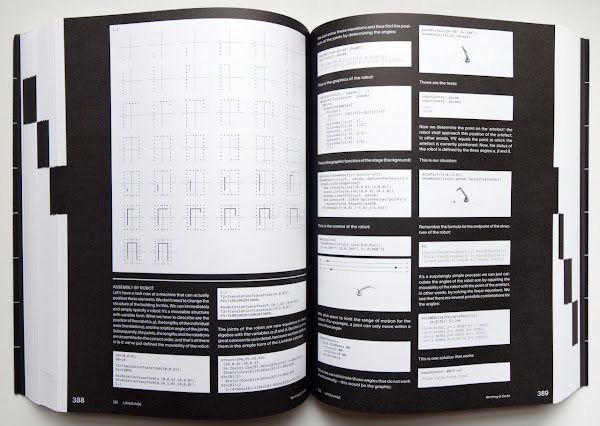 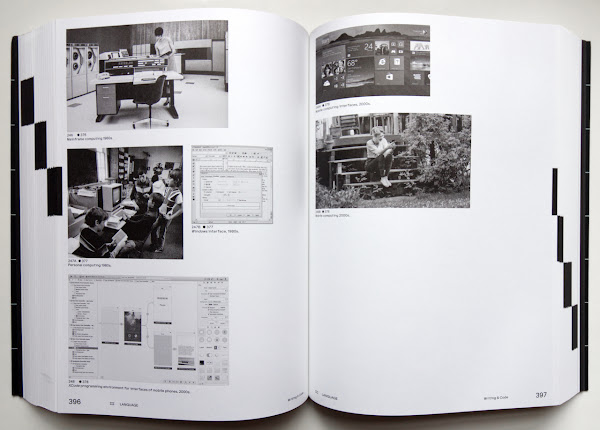 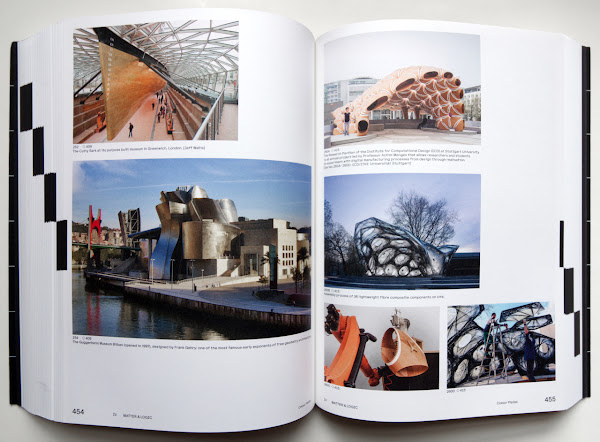