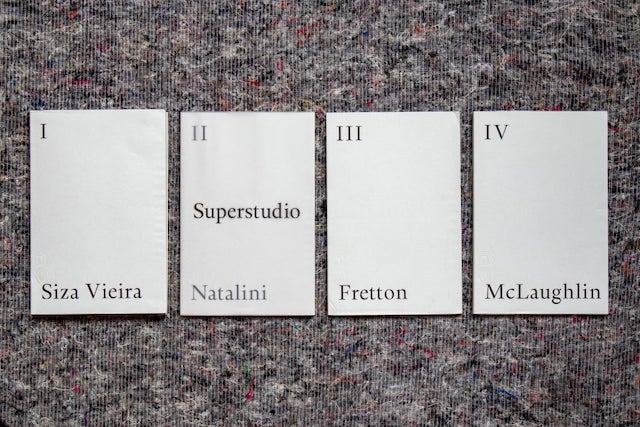 PUBLISHER'S DESCRIPTION:
This series of books is generated, very simply, from conversations with architects sitting again in front of their old sketchbooks. Often, he or she may not have opened them for many years; we found them ready to speak now quite as unselfconsciously as they had been drawing decades before.
The Drawing Matter collection has a focus on material of this kind, and we have long recognized that sketchbooks are generally the most personal – and the least casually accessible – medium for the production of architectural thinking. To understand the collection better, we have tried here to invent an instrument in which the ideas of the architect, as expressed in the sketchbook and through the spoken word, might once again be synchronized.
The publication of the four volumes is timed to coincide with an exhibition of the same title at the Tchoban Foundation Museum for Architectural Drawing, in Berlin.
dDAB COMMENTARY:
In June 2013 Portuguese architect Álvaro Siza spoke at the Museum of Modern Art about the Foundation Iberê Camargo in Porto Alegre, Brazil. It was a memorable lecture in part because of the format, with page after page from Siza's sketchbooks displayed large on the screen behind him. It was like a peek into his design process, his words revealing what was happening with his distinctive sketches. There were photographs of the building as well, but really the talk was about drawing and the process of making architecture. He even described how he liked to sit at a cafe with coffee and pastry, sketching his surroundings; if someone recognized him or he received special treatment he would move on to another cafe and resume his anonymity. In this sense, sketching is highly personal to Siza, so hearing him explain his sketches was an intimate experience, even in a room with hundreds of spectators.
A similar intimate experience is found in the first of four (and counting?) Opening Lines books from Somerset's Drawing Matter, published on the occasion of a 2018 exhibition at the Tchoban Foundation in Berlin. Opening Lines I: Álvaro Siza Vieira finds Siza literally sitting down one afternoon with Manuel Montenegro and Niall Hobhouse and describing the pages from seven early sketchbooks. (Videos of the conversations are available on Drawing Matter's Vimeo channel.) Siza's sketchbooks are numbered and here he talks about numbers 4, 8, 13, 34, 40 and 41. That those sketchbooks span from 1977 to 1979 should indicate just how much Siza draws and give a hint of how many sketchbooks he has accumulated and completed since. The originals are beautifully reproduced on the book's large pages, while the transcribed conversations are found on smaller pages that are keyed to the numbered drawings. (This format extends to the rest of the series.) There are an abundance of sketches pertaining to SAAL Bouça Housing in Porto, the Borges & Irmão Bank in Vila do Conde, and other buildings, but we also see sketches of people and other things that drew his attention; one drawing even has Siza sketching himself sketching his legs — a drawing within a drawing.
The four Opening Lines books are available individually from Drawing Matter or as a bundle. I'm guessing the 240-page book on Siza would be the most appealing to architects. It's definitely the case with me, even if I had not seen Siza speak at MoMA all those years ago — so recognizable are his sketches, always set at an angle to the page. This doesn't mean the other three books in the series are throwaways. Hardly. The Siza book can be seen as an invitation to explore the sketchbooks of the three other architects: Adolfo Natalini of Superstudio, British architect Tony Fretton, and Irish, London-based architect Níall McLaughlin.
Although these three books are shorter (126, 86, and 140 pages, respectively), they are just as rewarding in their drawings combined with conversations. Natalini focuses on The Continuous Monument, revealing the rough sketches that led to the iconic montages Superstudio is known for. Fretton walks through the sketchbooks for the 30-year-old Lisson Gallery in London. And McLaughlin, who has, in my opinion, the most beautiful hand in the lot, talks through a number of his sketchbooks, culminating in drawings for the Alzheimer’s Respite Centre in Dublin, which was creatively exhibited at the 2016 Venice Architecture Biennale. Series editor Tina di Carlo writes that "Drawing Matter will continue the series as the occasion arises," so I'm crossing my fingers for some such occasion.
SPREADS:
Email Post
Labels: drawing matter free-for-all friday