The Architectural Association in the Postwar Years 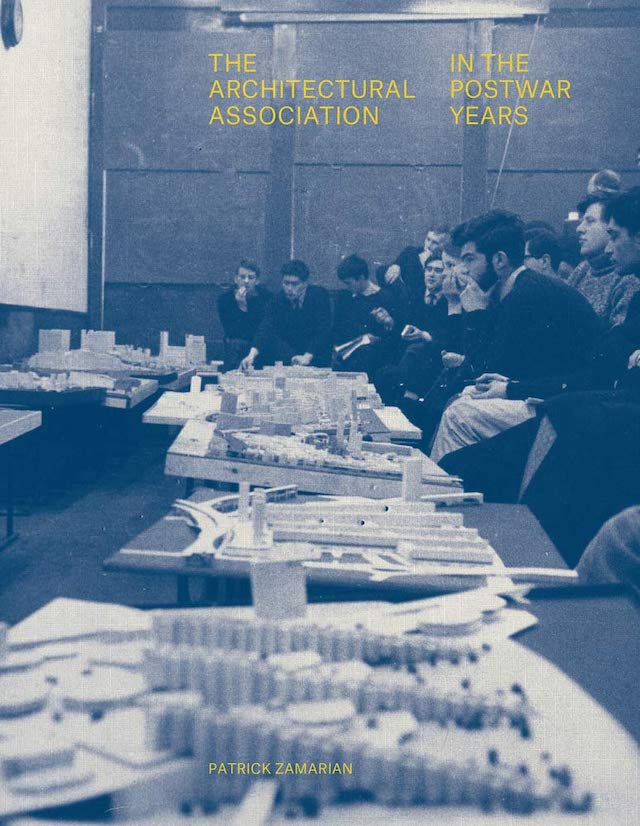 PUBLISHER'S DESCRIPTION:
In the period following the Second World War, the Architectural Association (AA) became the only British school of architecture of truly global renown. It was one of only two schools in the world which fully embraced and promoted the pedagogical ideals put forward by CIAM (Congrès Internationaux d’Architecture Moderne) — the other being Walter Gropius’s Harvard Graduate School of Design — and emerged as an admired example for architectural education in other countries. Many of the most famous British architects and critics of the past 60 years attended the AA, including Ahrends, Burton + Koralek, Alan Colquhoun and John Miller, Jeremy Dixon and Edward Jones, Frank Duffy, Eldred Evans, Kenneth Frampton, Bill Howell, John Killick, Robert Maguire, Cedric Price, Graeme Shankland and Oliver Cox, Quinlan Terry, John Voelcker, and almost a dozen recipients of the RIBA Gold Medal, viz. Neave Brown, Peter Cook, Edward Cullinan, Philip Dowson, Nicholas Grimshaw, Michael and Patricia Hopkins, Powell + Moya, Richard Rogers, and Joseph Rykvert.
The book traces the history of the school from the end of the war until the mid-1960s, when it surrendered its position as the pacemaker in British architectural education in order to safeguard its institutional independence. Alvin Boyarsky, who became chairman in 1971, remodelled the AA as a postmodern, ‘internationalist’ school and detached it from its modernist, British origins. In keeping with this (and partly as a result of it), there has been no research into the AA’s postwar history, which remains dominated by myths and half-truths. The book replaces these myths with an in-depth account of what really happened.
Patrick Zamarian is a Lecturer in Architecture at the University of Liverpool, where he was awarded a PhD for his thesis on The AA School of Architecture in the Postwar Period (1945-1965). He also holds master degrees in architecture and the history and theory of architecture, both awarded by ETH Zurich.
REFERRAL LINKS:

dDAB COMMENTARY:
Although the Architectural Association is nearly 175 years old, the London institution is guilty of severe amnesia. The "History of the AA" page on the AA's website has just three paragraphs of text, situated below a photograph of a young Zaha Hadid in the middle of an exhibition. So people interested in the background of the AA see its most famous former student and they learn it "was established as a student-centered collective in 1847" and moved to Bedford Square in 1917, but the rest remains an enigma. Wikipedia isn't much better, especially if we hone in on the people who directed the school from its founding to its recent past: only eight former directors are listed, with a huge gap before 1929 and another sizable one between 1935 and 1971; Patrick Zamarian's The Architectural Association in the Postwar Years exhaustively fills in the second gap.
The year 1971 is important to the AA, and may even be understood by architects with some knowledge of the school. That is the year Alvin Boyarsky took over as chairman. He stayed in that position until his death in 1990, seeing the school attract many international students, including Hadid and Rem Koolhaas, but many more not so famous. The school was also known in those years for the talent it attracted to teach in its famous — and famously innovative — unit system; these included Peter Cook, Daniel Libeskind, and Bernard Tschumi. So for many people, myself included, the AA is Boyarsky; it is forever associated with that two-decade period, the blossoming of the school on the international architecture scene. But what about the years and decades before, between the AA's abandonment of the Beaux-Arts methods in the 1930s and Boyarsky's reinvention of the school as an "intellectual infrastructure for architectural postmodernism."
Zamarian admits in his introduction that Boyarsky's tenure has been given considerable attention by architectural historians. Even though his book focuses on the years 1945 to 1965, an epilogue addresses the Boyarsky years, from 1965 to 1990. That's where I jumped into the book, finding myself a bit lost with references to previous school directors but interested to see just how Boyarsky came to power. Zamarian goes into a lot of detail on the transition from William Allen (AA head from 1961–65) to John Lloyd (1966–71) to Boyarsky, whose main competitor for the role was Kenneth Frampton, a graduate of the AA (Boyarsky went to McGill and Cornell). Amazingly, Lloyd actually predicted at the end of 1970 that the AA would be closed permanently within two years, "with no alternative funding in sight and the school literally disintegrating before his eyes," in Zamarian's words. Boyarsky could be seen as the school's savior, but Zamarian tempers the myths around him, describing Boyarsky as the facilitator of the AA's internationalization — still in effect today — not the instigator of it.
Zamarian's chronological chapters start with a brief history of the AA, from its 1847 formation to the end of WWII. The heads of the school structure the chapters between this first chapter and the Boyarsky epilogue that comprises chapter 9. Gordon Brown's tenure (1945–49) is covered in chapter 2, while the next discusses his successor Robert Furneaux Jordan (1949–51). The fourth chapter covers student work in the same years as chapter 3, after which come three chapters devoted to the longer tenure of Michael Pattrick (1951–61). Chapter 7 details some of the problems in the second half of the 1950s that would lead to Lloyd's pessimistic prediction, followed by chapter 8, on Allen's efforts to overcome the "growing political and financial pressure."
Politics and finances, as well as architectural ideology, make up a lot of Zamarian's text, which is the product of his doctoral research carried out in England after studies at ETH Zurich, as far removed from the AA as any architecture school. As such, the book will be of particular interest to people interested specifically in the AA, more generally in architectural pedagogy, and/or in the evolution of architectural education in the middle of the 20th century. Accompanying the detailed though readable text are dozens of illustrations by students over those postwar years: most are b/w, presented alongside the text, though 25 color plates are found in the back of the book (spreads, below). These student projects are at a far remove architecturally from Hadid's Malevich's Tectonik, but the names are just as familiar: Nigel Coates, Nicholas Grimshaw, Cedric Price, and Richard Rogers, among numerous others. With lengthy captions on each student project, the illustrations are more than eye candy; they add even more information concerning a time and a place that previously had only a shortage of it.
SPREADS: 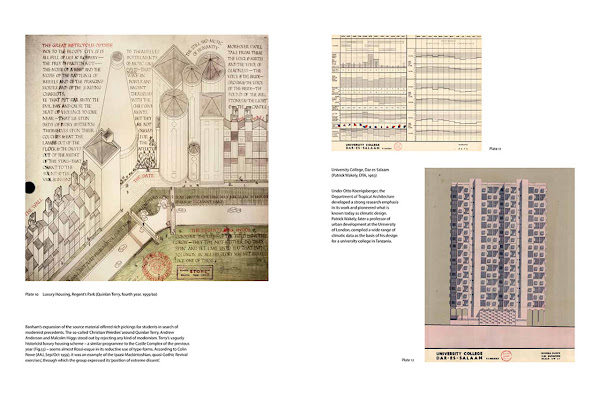 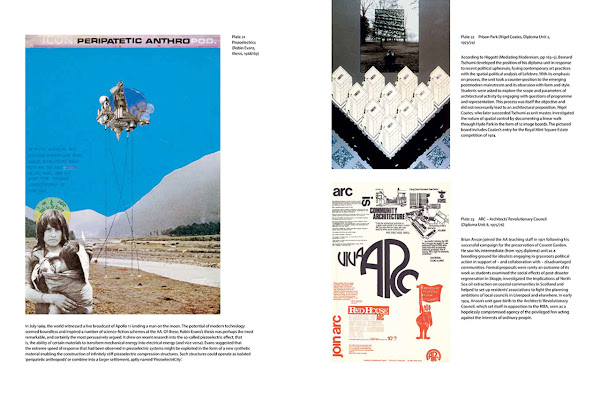 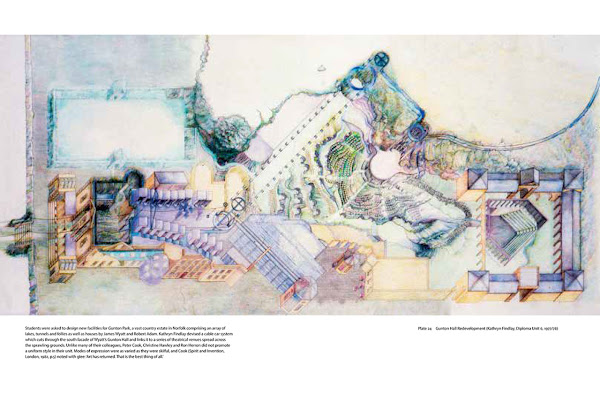