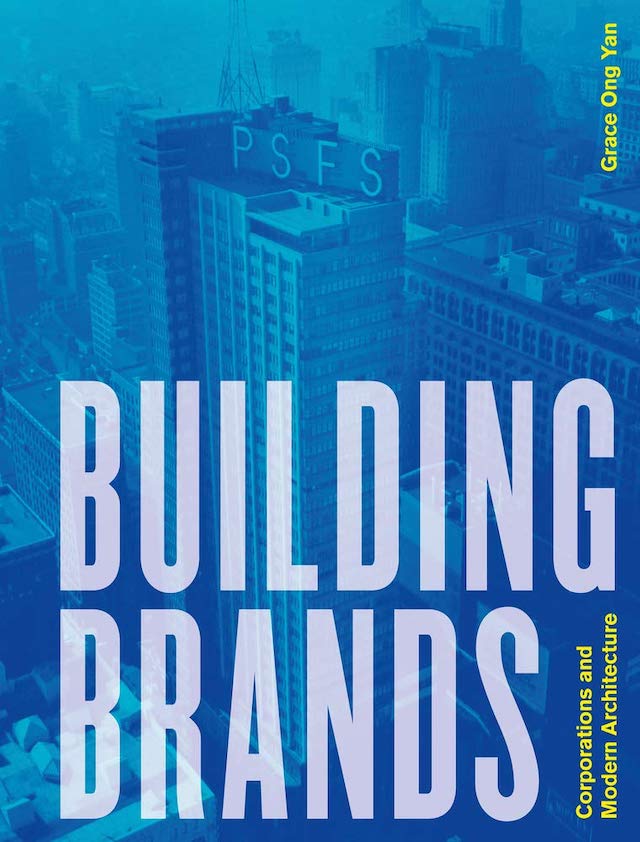 PUBLISHER'S DESCRIPTION:
Between the Stock Market Crash and the Vietnam War, American corporations were responsible for the construction of thousands of headquarters across the United States. Over this time, the design of corporate headquarters evolved from Beaux-Arts façades to bold Modernist expressions. This book examines how clients and architects together crafted buildings to reflect their company’s brand, carefully considering consumers’ perception and their emotions towards the architecture and the messages they communicated.
By focusing on four American corporate headquarters: the PSFS Building by George Howe and William Lescaze, the Johnson Wax Administration Building by Frank Lloyd Wright, Lever House by Skidmore, Owings & Merrill and the Röhm & Haas Building by Pietro Belluschi, it shows how design devices of sign, fame, form and material brought company messages to the public. Drawing on original material from corporations’ archives, Building Brands brings new insights to corporate Modernism by examining how company leaders, together with their architects, conceived of their headquarters not only as the consolidation of employee workplaces, but as architectural mediums to communicate their identities and brands.
Dr. Grace Ong Yan is Assistant Professor at Thomas Jefferson University, Philadelphia, USA.
REFERRAL LINKS:

dDAB COMMENTARY:
When it came time to find a photograph of the PSFS Building for my now five-year-old book, 100 Years, 100 Buildings, my small budget resulted in using just one photo courtesy of Loews Philadelphia Hotel, the tower's current occupant; it shows the base of the 32-story tower that was completed in 1932, the same year as Modern Architecture: International Exhibition at MoMA. People familiar with the building know a photo limited to the base of the tower designed by George Howe and William Lescaze is less than ideal. While the photo in my book does show the rounded corner and storefront as well as the slight cantilever of the elevation facing Market Street — two features that are integral to the innovative modern design — it fails to capture the large "PSFS" letters on the rooftop. Three stories tall and illuminated at night, in many ways the PSFS sign *is* the building. Even now, nearly thirty years after PSFS lost ownership of the building, the sign remains — and stubbornly remains an icon on Philadelphia's considerably taller skyline.
In addition to gracing the cover of Building Brands, the PSFS Building is the first — and longest — of four case studies by Grace Ong Yan that focus on the ways modern architecture was used by corporations to communicate their brands to a wider public last century. Coming out of Ong Yan's 2010 dissertation, "Architecture, advertising, and corporations, 1929-1959," the book also tells the stories of the Johnson Wax Administration Building (1939) in Racine, Wisconsin, by Frank Lloyd Wright; Lever House (1952) in New York City by Skidmore, Owings & Merrill (SOM); and the Röhm and Haas Building (1964) in Philadelphia by Pietro Belluschi. Each building/chapter addresses a particular way architecture relates to branding and how architects relate to their corporate clients. PSFS, logically, is about its "sign"; Wright and S.C. Johnson deal with "fame"; SOM's Lever House is about "form"; and the lesser known building by Belluschi for Plexiglas explores "material."
Given my familiarity with PSFS and the 61 pages Ong Yan devotes to it, I honed in on that chapter. (Johnson Wax was also in my book, but here it's given "only" 38 pages.) It's an impressive case study that reveals many facts that were not part of, best I can remember, the main reference I used in my research years ago: "The American Acceptance of the International Style: George Howe & William Lescaze's Philadelphis Saving Fund Society Building," a long chapter in William H. Jordy's American Buildings and Their Architects, Volume 5: The Impact of European Modernism in the Mid-Twentieth Century, first published in 1972. Although Ong Yan repeatedly references Jordy's essay, "PSFS: Its Development and Its Significance in Modern Architecture," published in the Journal of the Society of Architectural Historians in 1962, out of which the book chapter came a decade later, Ong Yan's interests depart from the formal/art historical criticism of Jordy.
Some of the interesting tidbits I noted while reading the PSFS chapter in Building Brands include: George Howe's pre-Lescaze partnership branch banks and an early tower design for PSFS, all of which are more Beaux-Arts than International Style; Howe and Lescaze's discussions with the client about the horizontality versus the verticality of the facades, something that could be seen as just about architectural aesthetics but here is discussed in terms of the image the bank wanted to project to the public; many details on how the sign was determined, including the mounting of full-size mock-ups to determine if the bank's name in full words or in acronymous letters should be used; seeing the building as "an entity," with modern surfaces and furnishes extending to the interiors; and the way modern design was used to sell to both potential office tenants (air conditioning!) and bank customers. Perhaps most interesting was PSFS's assertion that the tower design should advertise the bank, not the architects. This invitation for the architects to not repeat themselves on any subsequent designs, among other things, gets at the role of modern architecture in the hands of business, something carefully and capably explored in Ong Yan's excellent book.
SPREADS: 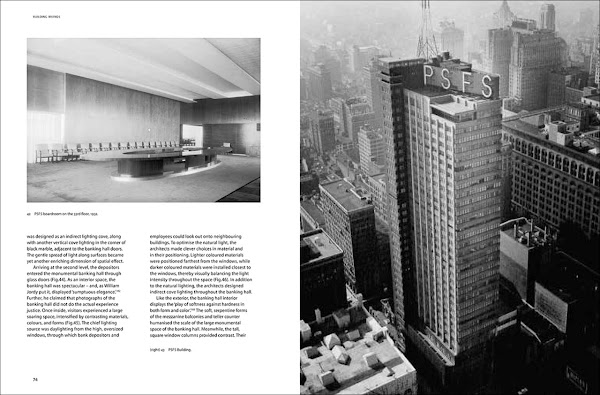 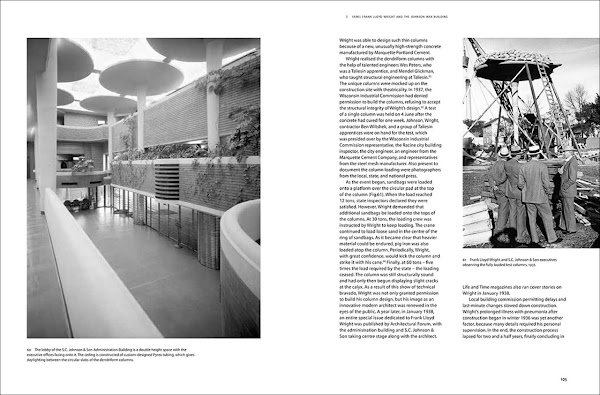 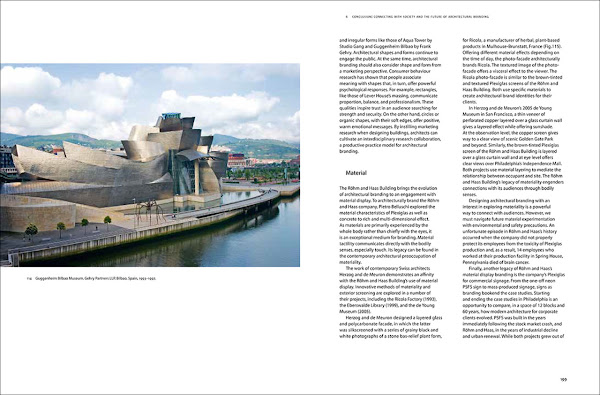