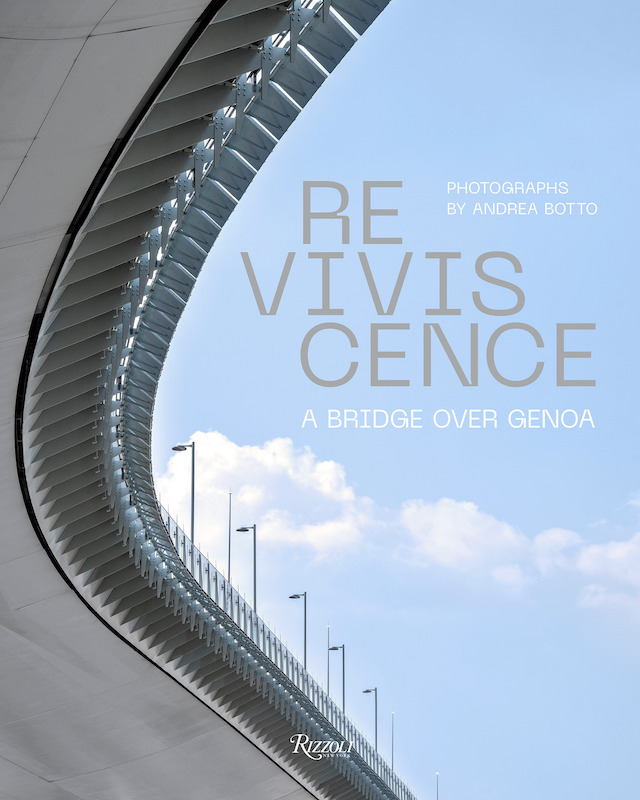 PUBLISHER'S DESCRIPTION:
An artistic photographic book dedicated to the reconstruction of the Polcevera Viaduct, also known as Ponte Morandi, in Genoa, which tragically collapsed in 2018.
Andrea Botto, a photographer and visual artist specializing in large works, uses his shots to describe the stages involved in the demolition of the old Ponte Morandi and the construction of the new infrastructure designed by Renzo Piano. His lens follows each phase of the undertaking with technical expertise and attention to the composition of the image, in a skillful combination of documentary reportage and aesthetic research.
Botto has been working for RINA Consulting, the Italian agency supervising both the demolition and the construction of the new bridge, which is set to become a new landmark in Genoa, having been designed by Renzo Piano, one of the most renowned architects in the world.
RINA Consulting was selected by the commissioning authority to carry out project management, supervision, quality control, and safety coordination during the execution phase of the project.
Andrea Botto is an Italian fine-art photographer and lecturer. His projects have been acknowledged by grants and awards and have been exhibited in international museums. His works can be found in private and public collections. He carries out and manages editorial and corporate projects, specializing in decommissioning and infrastructure projects.
REFERRAL LINKS:

dDAB COMMENTARY:
August 14, 2018, probably is not a day imprinted in most people's minds. Unless you live in Genoa, Italy, then it is forever known as the day a section of the Morandi Bridge collapsed, falling the equivalent of 15 stories and killing 43 people. Before the end of 2018, architect Renzo Piano — born in Genoa in 1937 and based in the port city — had a design for the replacement bridge, which he reportedly did for free out of "civic spirit." The incredible speed by which a "safe" bridge was designed continued into its construction — the new Genova-San Giorgio Bridge was inaugurated on August 3, 2020, just shy of the tragedy's second anniversary. This book documents that two-year period through dozens of photographs by Andrea Botto.
The book starts with short texts by politicians, public employees, and executives at RINA Consulting, the company that handled the bridge's project management; each of them basically describes what they were doing that August day, how they reacted, and how they contributed to the rebuilding. There's also an interview with Renzo Piano, as well as some quotes from important players scattered throughout the book. But those words don't matter too much because Reviviscence — meaning "a return to life after suffering a traumatic event" and found spray painted on a retaining wall at the site of the destruction in July 2019 — is, pure and simple, a book of photos.
Botto's photos are presented in chronological order from February 2019 to August 2020, highlighted with dates that make the reader aware of the accelerated nature of the construction. But before construction even begins, the photos reveal months of Morandi Bridge's demolition, first slowly and carefully by hand and with tools, and then, on June 28, 2019, with dynamite. The latter, which brought down a large section of the old bridge adjacent to residential buildings in the so-called "red zone" (the hundreds of residents were reportedly found new accommodations after they were forced out of their homes), is told in a way that is almost cinematic, with each step of the preparation told in photos: securing the site, testing the water bags that would control dust, and many photos of the detonation itself.
Following the detonation (first spread, below) and cleanup, the second half of the book is devoted to the construction of the new bridge. Botto's photos are a wide assortment, from panoramic views down to minute details, some of them a bit poetic or strange: red marks on concrete made by a pile of rusty nails; a half-eaten sandwich next to some construction equipment; a tarp sitting in a pile on a concrete slab. Most of the photos fit somewhere between these poles, revealing how the bridge was erected into its final form over the course of many 24-hour days, all somehow in the midst of the coronavirus pandemic. One of the most powerful images, near the end, is the "garden of memory," where 43 trees are arranged in a circle near the point of the collapse. It is a reminder of how the people of Genoa, especially those involved on this project, will never forget August 14, 2018.
PHOTOS: 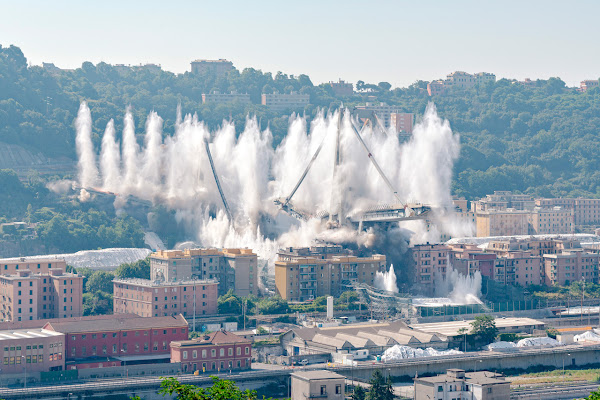 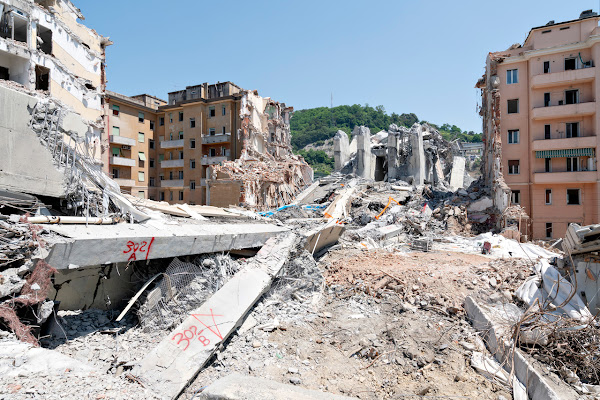 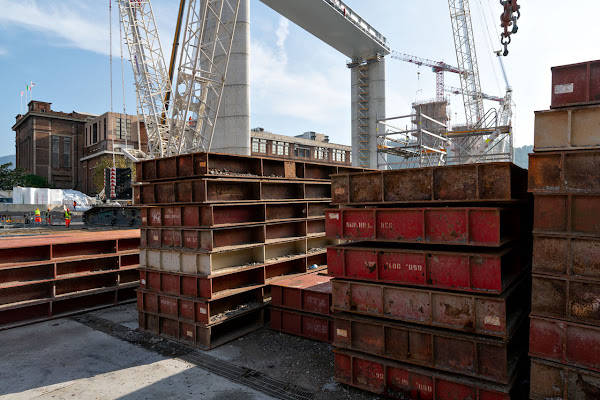 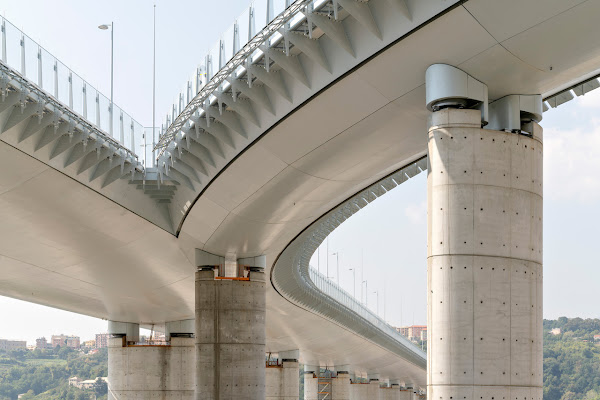 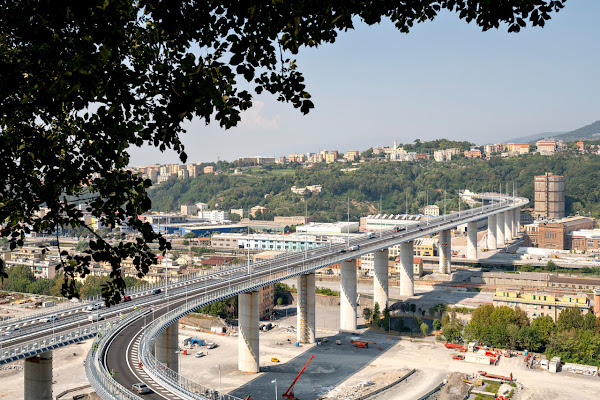