The Architecture of Point William 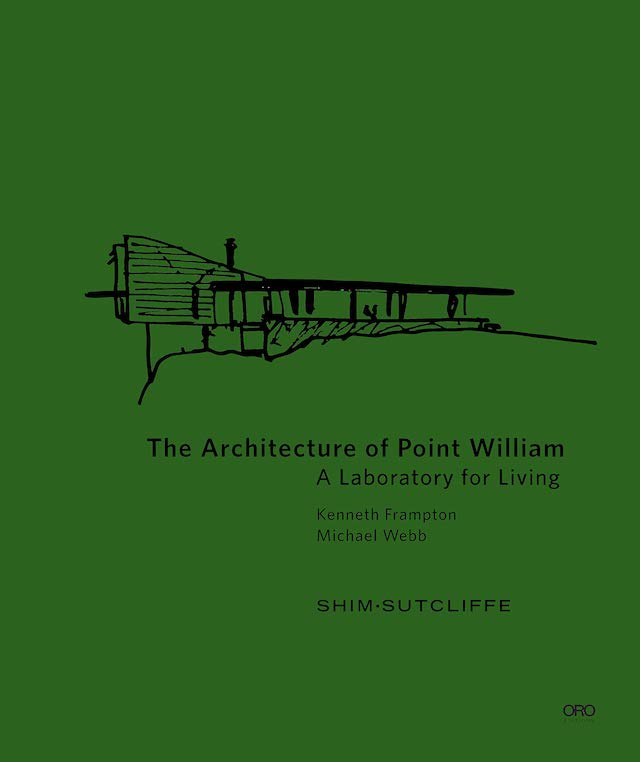 PUBLISHER'S DESCRIPTION:
Shim-Sutcliffe’s masterful work at Point William intertwines landscape and architecture with ancient rock and water reshaping and reimagining a site on the Canadian Shield over two decades. Found conditions and new buildings are interwoven and choreographed to create a rich spatial experience moving between inside and out.
Kenneth Frampton provides an insightful introduction with selected images and his own sketches framing a way of seeing Point William for the reader. Michael Webb’s provocative interview with Brigitte Shim and Howard Sutcliffe describes their evolving vision for Point William and their two-decade journey towards its realization.
Acclaimed photographers Ed Burtynsky, James Dow and Scott Norsworthy contribute through their powerful images capturing the spirit of Point William thorough the seasons and over time.
Brigitte Shim and Howard Sutcliffe established their design practice Shim-Sutcliffe enabling them to intertwine light, water and landscape in exploratory and innovative ways. Shim-Sutcliffe’s built work addresses the integration and interrelated scales of architecture, landscape, furniture and fittings. Kenneth Frampton is the Ware Professor at the Graduate School of Architecture, Planning and Preservation at Columbia University where he has served as a member of its faculty since 1973. Recent accolades include the 2018 Golden Lion for Lifetime Achievement, Venice Biennale of Architecture. Michael Webb is a Los Angeles-based writer who has authored more than twenty books on architecture and design – including Building Community: New Apartment Architecture – while contributing essays to many more.
REFERRAL LINKS:

dDAB COMMENTARY:
Last week Canadian architects Brigitte Shin and A. Howard Sutcliffe were named recipients of the 2021 RAIC Gold Medal. When I hear architecture news like this, the first thing I do is look in my library for related books. In this case I found only two, one nearly ten years old and one brand new. The first is Five North American Architects: An Anthology by Kenneth Frampton, which includes Shim-Sutcliffe as one of the handful of architects selected by the architectural historian on the occasion of his 80th birthday in 2010. The second is this monograph devoted to the four buildings Shim and Sutcliffe designed for Gerald Sheff and Shanitha Kachan over two decades on a beautiful piece of waterfront land on Lake Muskoka, Ontario, that the owners call Point William. The Architecture of Point William is just the fourth book listed on the website of Shim-Sutcliffe — and the only one in print — a clear indication of the dearth of books devoted to them.
Early in The Architecture of Point William, Frampton reprises his role as fan of Shim and Sutcliffe with his essay describing the buildings at Point William in chronological order: Boathouse (1999), Guest Cottage (2010), Cottage (2017) and Garage (2018). (I would have linked to all of these projects on the architects' website, but their projects section is severely out of date, with nothing after 2001; maybe the RAIC Gold Medal will push them to finally bring the projects up to date.) Frampton's text focuses on how the buildings are arranged across the site, what they are made from, and how they are detailed. Accompanying his words are some of the many photographs in the book but also drawings from Frampton's sketchbook from two visits he made to Point William. The sketches are like notations, revealing the flow of the landscape and the position of elements within it, be they buildings, trees, rocks, or ground surfaces. Some sketches hone in on certain details, such as the way one corner of the Guest Cottage "floats" above the moss and rocks; a photo by Ed Burtynsky of the corner on the same page is helpful and indicative of the image juxtapositions in the chapters that follow.
After Frampton's essay are four chapters on the four buildings, also in chronological order. The buildings are presented primarily through photographs and hand drawings by the architects, neither of them with any captions. Hardline plans and sections are in the back of the book, which means some back and forth is necessary to gain the fullest understanding of each individual building; the same applies to Frampton's essay, which has many statements that presuppose knowledge of the plans for orientation. Once a reader digests Frampton's essay, the chapters on the individual buildings, and the drawings at the back of the book, readers realize the four buildings are each unique yet tied together through Shim-Sutcliffe's attention to detail and responsiveness to the site conditions; the latter is evident most overtly in the way the Guest Cottage and Cottage face each other across an impressive rock that the hardscape seems to hug and float over, much like the corner of the Guest Cottage. Touches like floating edges and wood ceilings, as pointed out by Frampton, create a subtle thread uniting the four buildings through architectonics reminiscent of Aalto and Scarpa.
The remaining contributions to the book are a foreword by the clients, some introductory remarks by Shim and Sutcliffe, and the duo in conversation with writer Michael Webb. This as-told-to conversation that sits between the building chapters and the floor plans gets into the nitty gritty of how the architects gained the commission, dealt with practical issues (zoning, where the clients stayed during construction, etc.), and approached the design and detailing of the four residential buildings. Drawings and models that show early iterations of the Cottage are great to see and thankfully are accompanied by long captions. What comes across in this conversation — across the whole book, really — is the way the architecture of Point William is a total work of art, with Shim-Sutcliffe designing fixtures, furniture, and built-ins that complement the client's own modern furnishings and other belongings. Clearly the tastes of the architects and the clients are aligned, enough that Shim and Sutcliffe call the Point William project "a double portrait." The Architecture of Point William does a remarkable job in "painting" that portrait for the rest of us.
SPREADS: 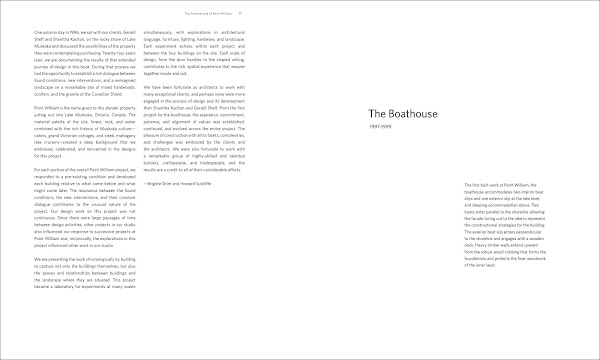 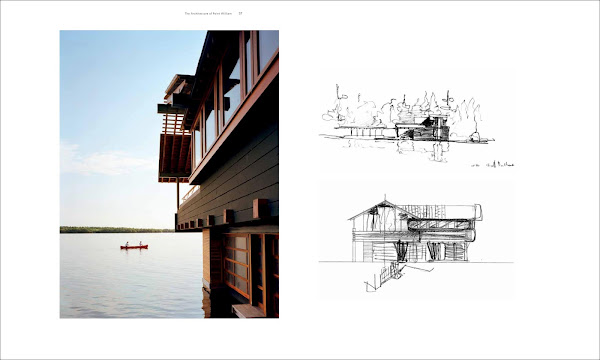 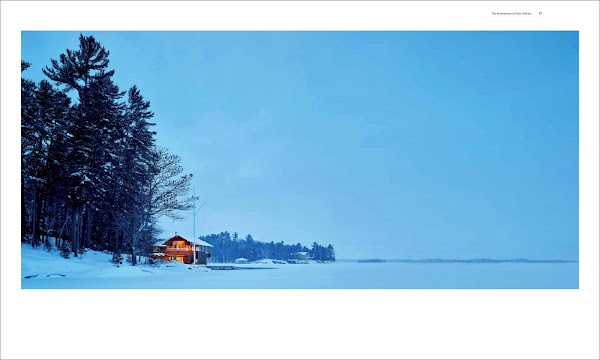 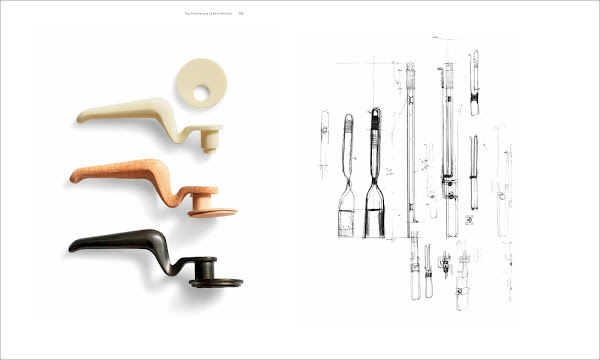 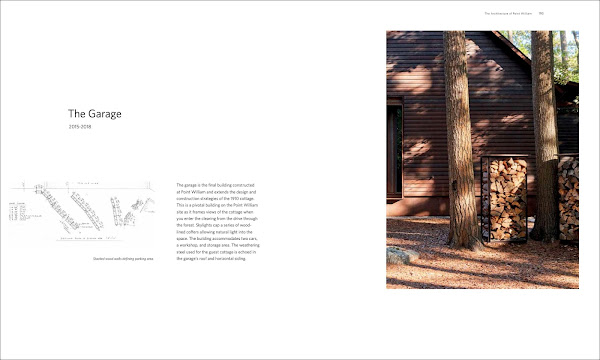