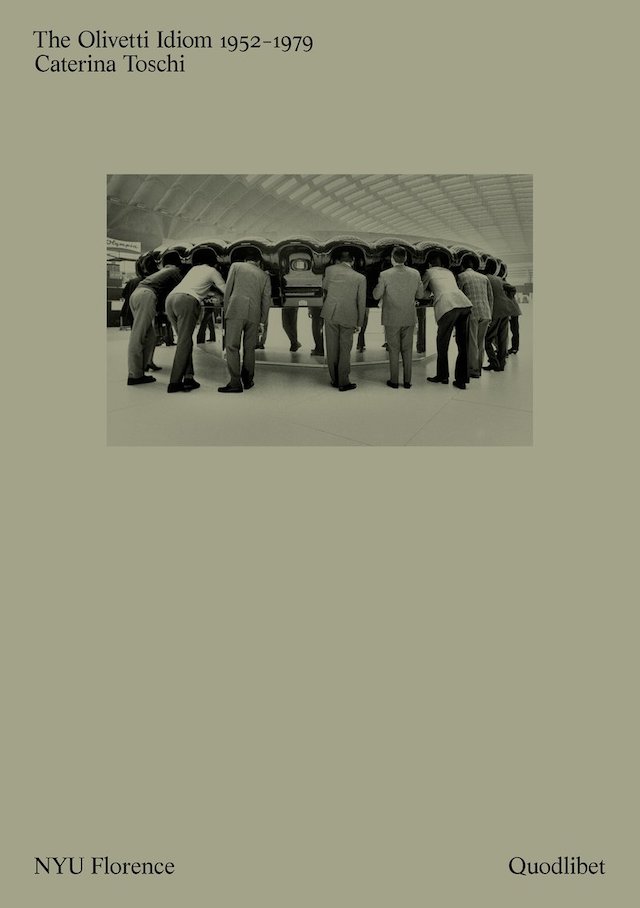 PUBLISHER'S DESCRIPTION:
The volume aims to reconstruct, through photographs and documents, the development of the Olivetti corporate identity from 1952 to 1979, as it was conveyed through various types of spaces for the exposition and description of its products: exhibitions, stores and its school. The display methods and the written, oral and visual forms of ‘storytelling’ that brought the instantly-recognizable Olivetti idiom international success come together here for the first time, from the little-known exposition Olivetti: Design in Industry, held from October to November 1952 at the Museum of Modern Art in New York, to the CISV, Centro Istruzione e Specializzazione Vendite (Center for Teaching Specializations of Olivetti Sales) (1954–1979), the first Italian school of marketing with a technical/humanistic focus, portrayed here through archival documentation and photographs by Paolo Monti and Gabriele Basilico. Photos by Aldo Ballo, Gianni Berengo Gardin, Erich Hartmann, Wayne Miller and Ugo Mulas document Olivetti showrooms and stores designed by Gae Aulenti, Ignazio Gardella, Leo Lionni, Carlo Scarpa and BBPR Studio, in major international metropolises (Buenos Aires, Chicago, Düsseldorf, New York, Paris, San Francisco, Venice, Vienna), as well as the traveling exposition Stile Olivetti (1961–1966) shown around the world in cities including Zurich, Nairobi and Hong Kong. The experimental exhibition Formes et Recherche (1969–1971), conceived by Gae Aulenti and depicted in photographs by Giorgio Colombo and Ugo Mulas, concludes this chapter in Olivetti’s history, a legacy of excellence that contributed much to building the identity of Italian industry.
Caterina Toschi Ph.D. in contemporary art history and Junior Scholar at the Getty Research Institute, she teaches contemporary art history at NYU Florence and at the University of Cassino and Southern Lazio. Co-founder of the cultural association Senzacornice, digital journal and research and education lab for contemporary art; she is the scientific supervisor at The Santa Maddalena Foundation of Beatrice Monti della Corte’s collection and of the Galleria dell’Ariete’s photographic archive.
REFERRAL LINKS:

dDAB COMMENTARY:
I'm an architect, so when I think of Olivetti, the Italian manufacturer known mainly for its typewriters, I think of the showroom in Venice designed by Carlo Scarpa. Sitting on the edge of Piazza San Marco, the double-height corner storefront is particularly memorable for its "floating" marble staircase with perches for displaying typewriters and other Olivetti wares. My exposure to the showroom was usually limited to it as a Scarpa — not Olivetti — project; how the design of the space fit into the client's business plan was never a consideration for me, outside of the notion that since Olivetti typewriters looked sharp its stores would do the same. As such, Caterina Toschi's The Olivetti Idiom is a welcome explication of how the company's architectural creations, including Scarpa's showroom, came to be.
The Olivetti Idiom 1952–1979 was published on the occasion of an exhibition of the same name at Villa Sassetti in Florence in spring 2018. The book and exhibition are the outcome of research conducted by Caterina Toschi, an art historian who taught at NYU Florence and is now Assistant Professor at the University for Foreigners of Siena. The Italian campus of NYU is called Villa La Pietra and is comprised of four buildings: Villa Colletta, Villa Ulivi, Villa Natalia, and Villa Sassetti. The buildings were acquired by NYU from the Anglo-American Acton family in 1994, when Harold Acton, a famous writer knighted by the Queen of England, died. An overlooked link between the Actons and NYU is Olivetti, which from the mid-1950s to the late-1970s rented out some of the villas from the Actons for a training center that led to the global imprint of the Italian brand on showrooms and exhibitions well beyond San Marco. Think of it as a precursor to the Apple Stores that permeate the world today.
Toschi's readable and beautifully produced book tells the 27-year story of Olivetti's postwar design idiom in five chapters, each one a clearly defined episode. It starts with Olivetti: Design in Industry, an exhibition that opened in 1952 at the Museum of Modern Art (MoMA) in New York and was curated by Leo Lionni, a name I previously associated just with children's books (Pezzettino and Alexander and the Wind-Up Mouse are a couple favorites). Although he summed up Olivetti as having "no real style resemblance in the superficial sense of the world," its wares, stores, billboards, and other creations were instantly recognizable, even then, as Olivetti. The successful exhibition traveled to six states and Canada over the next two years, bringing the "Olivetti idiom" to North American companies eager to emulate its practice of integrated design.
The second chapter details CISV-Centro Istruzione e Specializzazione Vendite (Center for Teaching Specializations of Olivetti Sales), the training center that occupied the future home of NYU Florence for two decades, followed by a chapter devoted to some of the many Olivetti Stores designed and built at the same time. Scarpa's in the latter, obviously, but so are a couple stores designed by BBPR, including one on New York's Fifth Avenue (it had an outdoor typewriter that was so popular the paper had to be refilled every hour), and two stores designed by Gae Aulenti, one in Paris and one in Buenos Aires. These stores by BBPR and Aulenti shine as much as Scarpa's Venetian showroom, but alas only the San Marco space survives (best I can tell), now as a museum with admission.
The fourth and fifth chapters are devoted to two more traveling exhibitions: Stile Olivetti, which opened at the Kunstgewerbemuseum in Zurich in 1961, and Formes et Recherche, which opened at the Musée des Arts Décoratifs in Paris in late 1969. The latter, conceived by Aulenti as an "experience," featured a space populated by a number of Olivetti "worlds," including the famous Jukebox designed by Ettore Sottsass, Jr. that is depicted on the cover of Toschi's book. For someone like me, whose knowledge of Olivetti was limited to images of sexy typewriters and memories of visits to Scarpa's showroom, The Olivetti Idiom is an eye-opener. It's highly recommended to people who love Olivetti, but also to those more generally interested in the history of corporate design.
SPREADS: 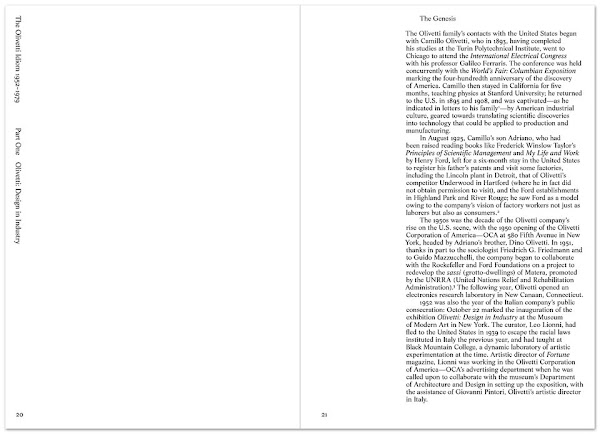 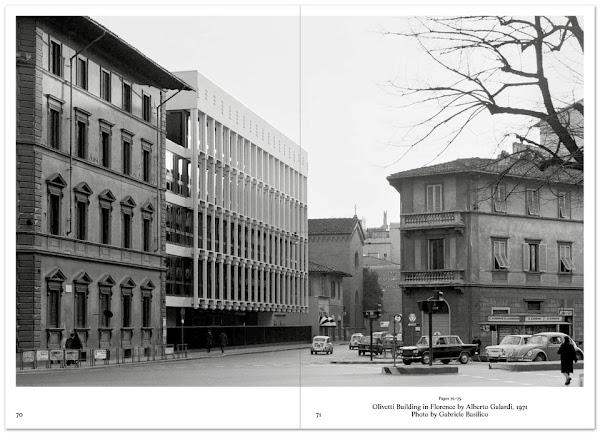 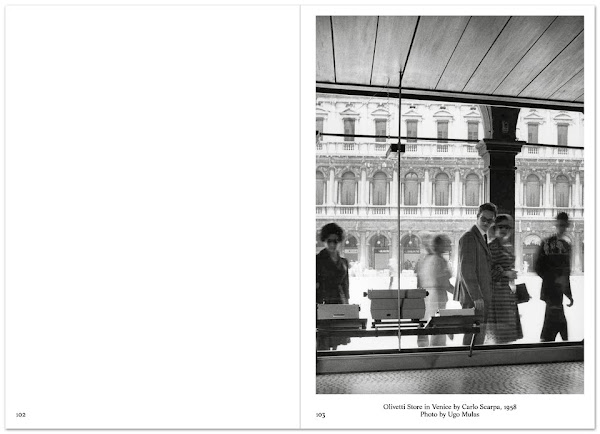 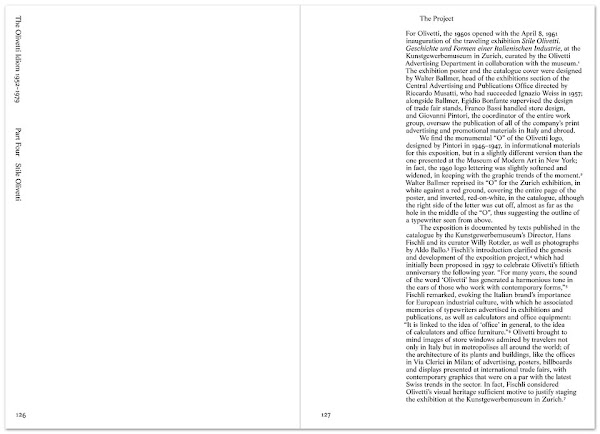 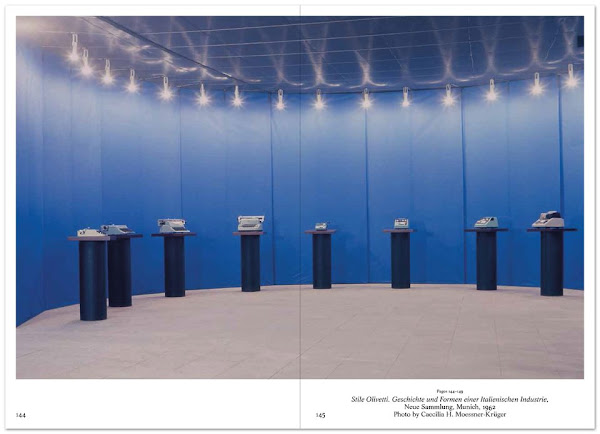 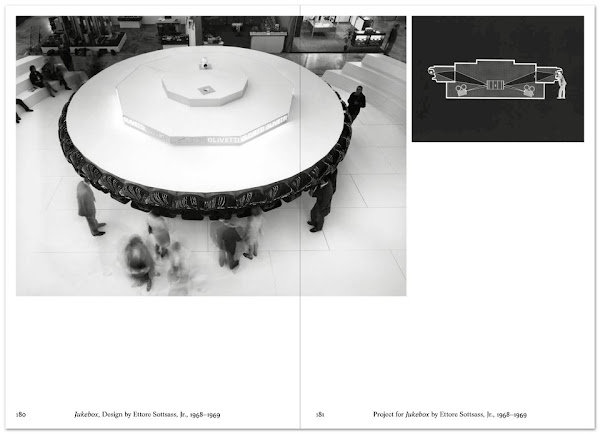