Two Sides of the Border 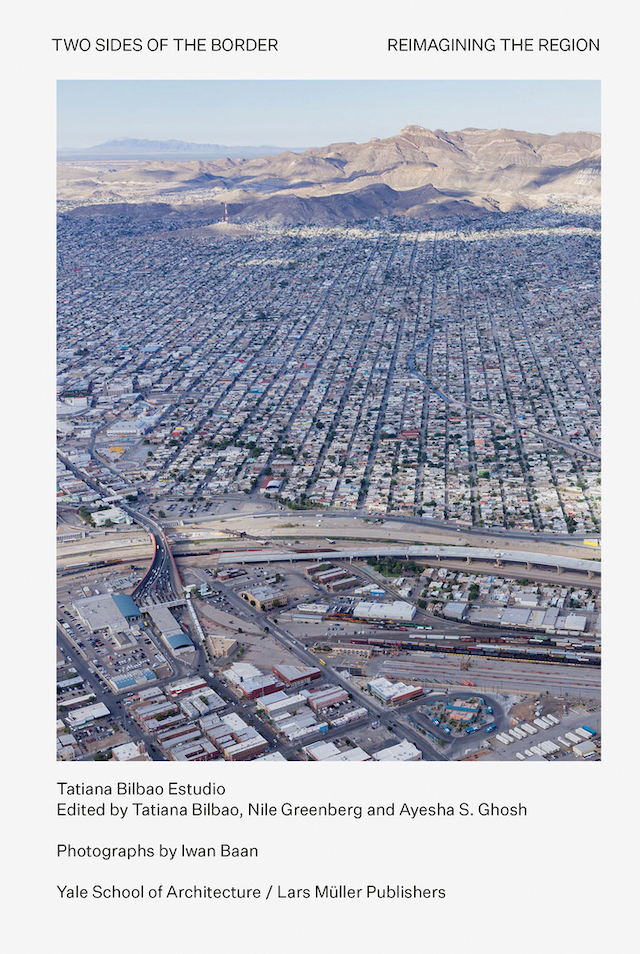 PUBLISHER'S DESCRIPTION:
Under the direction of Mexican architect Tatiana Bilbao, thirteen architecture studios and students across the United States and Mexico undertook the monumental task of attempting to capture the complex and dynamic region of the US/Mexican border. Two Sides of the Border envisions the borderland through five themes: migration, housing and cities, creative industries, local production, tourism, and territorial economies. Building on a long-shared history in the region, the projects covered in this volume use design and architecture to address social, political, and ecological concerns along the shared border.
Featuring essays, student projects, interviews, special research, and a large photo project by Iwan Baan, Two Sides of the Border highlights the distinct qualities of this place. Altogether the book uses the tools of architecture, research, and photography to articulate an alternate reality within a contested region.
Tatiana Bilbao is a leading voice in contemporary architecture. She founded Tatiana Bilbao ESTUDIO, a Mexico City based architecture studio, in 2004 with the aim of integrating social values, collaboration and sensitive design approaches to architectural work. ... Bilbao holds a recurring teaching position at Yale University School of Architecture ... She was born and grew up in Mexico City. Iwan Baan is an architecture and documentary photographer. ... In his photographs he focuses on the connection between architecture and the surrounding environment. Instead of isolating the built structure he embeds it in history and context.
REFERRAL LINKS:

dDAB COMMENTARY:
Last year, during the second Architecture & the Media conference, I was fortunate enough to interview Iwan Baan for World-Architects. One of the many things I learned in the conversation was about a studio the much sought-after photographer did with Mexican architect Tatiana Bilbao at Harvard GSD in the 2018/19 school year. That studio, called The House: The Waken Desire, was not their first collaboration though: about ten years ago Baan had photographed the Gratitude Open Chapel, designed by Bilbao and Derek Dellekamp, as part of the photographer's documentation of the Ruta Peregrino pilgrimage route in Mexico; and in early 2018, Bilbao dispatched Baan, alongside groups of architecture students, to photograph a variety of locations on both sides of the US/Mexico border.
Two Sides of the Border has — so far — had three lives. It started as an academic initiative organized by Bilbao that involved thirteen studios at a dozen US and Mexican architecture schools, from Yale and UC Berkeley to Monterrey and Iberoamericano. Those studios happened in spring 2018, and by the end of the year a traveling exhibition, the second iteration, opened at Yale School of Architecture, thereafter heading to Aedes Architecture Forum, El Paso Museum of Art, and Fay Jones School of Architecture. The third piece, the book, builds upon the first two, adding essays to the photographs by Baan, the projects by the many students, and the maps that made up a large part of the exhibition.
Like so many publications these days, Two Sides of the Border documents an ambitious project that consists of way too much textual and visual information to feature in its entirety. Edited by Bilbao with Nile Greenberg and Ayesha S. Ghosh, and published by the dependable Lars Müller, the book balances the project's many voices in a format that alternates sections of essays and photographs across its bulk, followed by the maps and student projects. With glossy paper for Baan's photos and matte paper for the essays, the book has an obvious visual and tactile rhythm, one that invites it to be read in any number of ways. The main organizing principle is longitude, with the places visited in words and photos moving from east to west across most of the book's nearly 500 pages.
Not surprisingly, a lot of content is found between 100 and 117 degrees west longitude — from Texas to Tijuana — but it also focuses on Ohio, the Yucatán, and other places at a great distance from the border; this is indicative of an approach that defines "region" in much broader terms than those typically discussed. Every part of the project — words, photos, maps, studio projects — serves to redefine people's attitudes toward "border" and "region." Yes, there are photos of the border wall (one of the mockups of the former US President's border wall prototypes opens the book), but readers also see neighborhoods near Mexico City, households in Kansas, and views of other places that illustrate how the lives of so many families bridge both countries.
In terms of pages, the essays and Baan's photos are given the most — adding up to about 375 pages, also including an interview between Bilbao, Baan, and Greenberg — with the maps section given roughly 50 pages and the student projects fewer than that. Greenberg admits early in the book that one of his unfortunate tasks was "having to reduce the incredibly thoughtful work by 129 students to a handful of pages." I'm not surprised that was necessary, though, as the three-part project aims to be much grander than that one component. In this sense, the essays play a large role, adding voices from both sides of the border on a myriad of issues, both historical and contemporary. Unfortunately, biographies are not provided for the contributors and it's not clear if the essays predated the spring 2018 studios, and therefore were used by the students in their design processes, or if they were created exclusively for the book. Whatever the case, the essays add layers of context and create occasional synergies with the efforts of Bilbao, Baan, and the students — for those willing to discover them among these pages.
SPREADS: 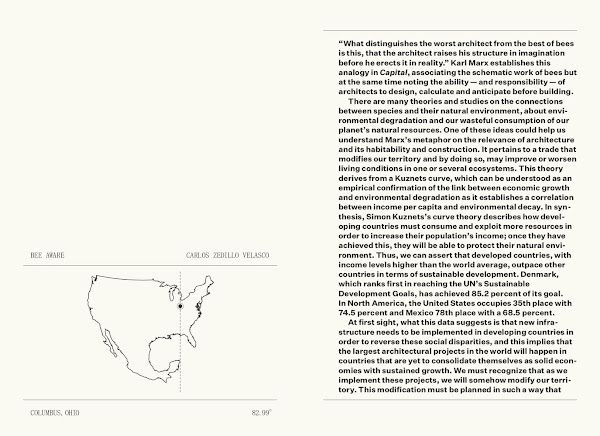 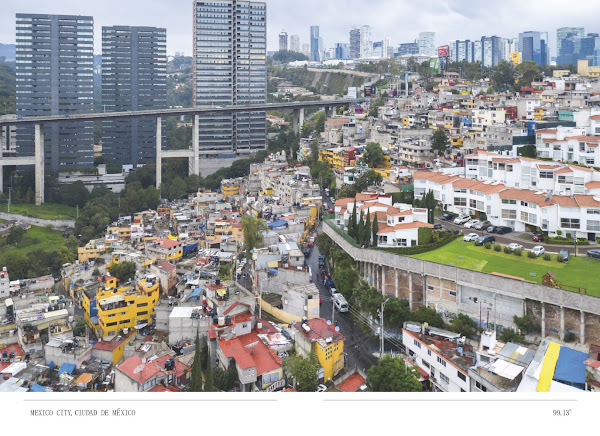 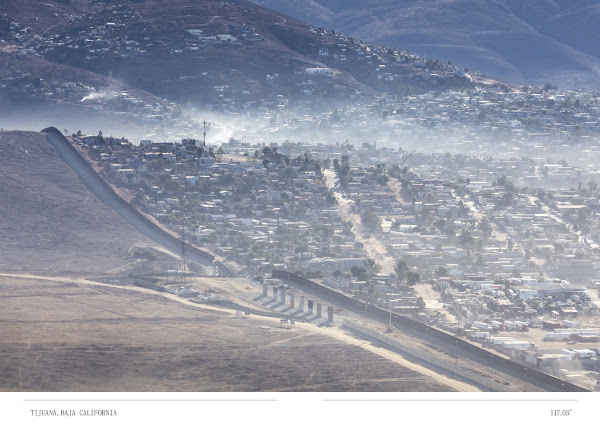 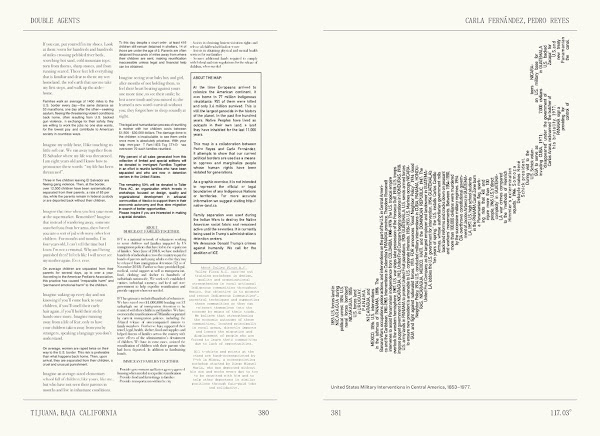 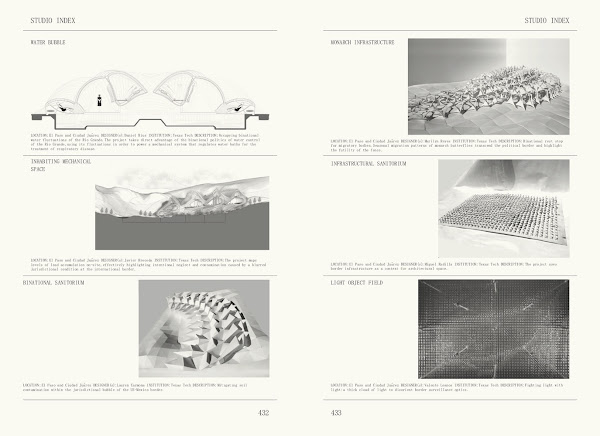