With Intention to Build 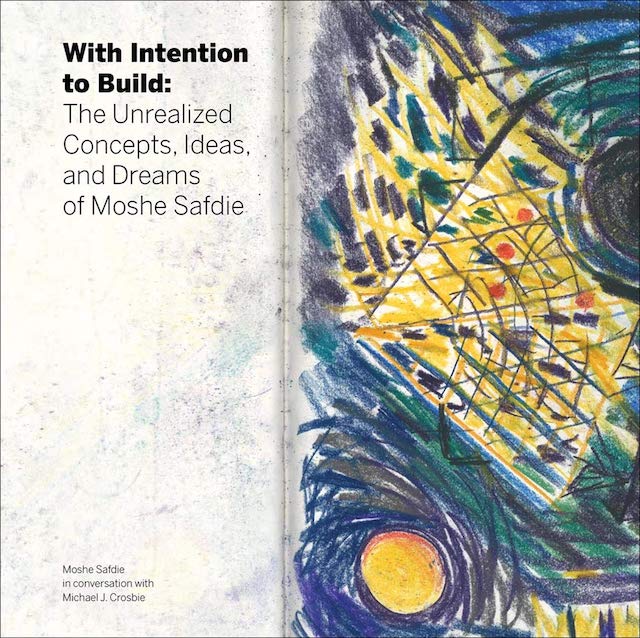 PUBLISHER'S DESCRIPTION:
Moshe Safdie explains that probably more than half of his lifetime design work is unbuilt, and he considers his unbuilt work to be some of his most significant work. In this richly illustrated book, replete with detailed diagrams, sketches, models and studies, Moshe Safdie explains that for those who design in order to build, not succeeding in building is never a failure (there are many reasons why a project might not be built) because these designs are part of the evolution of an architect's work. This volume is a fascinating journey through Safdie's thoughts and career, and also a historical reference of the social and political forces at play at the time. Not only a treatise on Safdie's unrealized concepts, this book is also a wonderful affirmation that there is valuable heritage in the unbuilt.
Includes a number of significant projects from around the globe, including the following: Habitat Original Proposal, Montreal, Québec, Canada 1964; Habitat New York II, New York, New York, United States 1967; San Francisco State, College Student Union, San Francisco, California, United States 1967; Pompidou Centre, Paris, France 1971; Western Wall Precinct, Jerusalem, Israel 1972; Supreme Court of Israel, Jerusalem, Israel 1985; Columbus Center, New York, New York, United States 1985; Ballet Opera House, Toronto, Ontario, Canada 1987; Museum of Contemporary Art, Stuttgart, Germany 1990; Superconducting Super Collider Laboratory, Waxahachie, Texas, United States 1993; Incheon Airport, Incheon, Korea 2011; Jumeirah Gateway Mosque, Dubai, UAE 2007; National Art Museum of China, Beijing, China 2012.
Moshe Safdie is an architect, urban planner, educator, theorist, and author. Over a celebrated 50-year career, Safdie has explored the essential principles of socially responsible design with a distinct visual language. A citizen of Israel, Canada and the United States, Moshe Safdie graduated from McGill University. After apprenticing with Louis I. Kahn in Philadelphia, Safdie returned to Montréal to oversee the master plan for the 1967 World Exhibition. In 1964 he established his own firm to realize Habitat '67, an adaptation of his undergraduate thesis and a turning point in modern architecture. Author of several books and a frequent essayist and lecturer, Safdie's global practice includes projects in North and South America, the Middle East, the developing world and throughout Asia and Australia.
REFERRAL LINKS:

dDAB COMMENTARY:
If one architect deserves a book collecting their unbuilt works, it is Moshe Safdie, whose ambitions for building big have been present since he was introduced to the wider world with Habitat 67. Such ambitions, as most architects know, often result in designs remaining unrealized. That project, completed when he was just 29 years old as part of the 1967 Montreal World Exposition, is big, especially for an architect's first project, but it is just a fraction of the original proposal's size and scope. Safdie recounts in this first of fourteen projects presented in With Intention to Build that "the original proposal [from 1964] was conceived as a sector of the city," with 1200 housing units, a 350-room hotel, two schools, and a shopping area housed in multiple 12- and 22-story sections. With just 158 apartments built in one 12-story section, Habitat 67 was relatively small compared to its original but big enough that Safdie clearly would not build a career of single-family houses or other smaller commissions after 1967.
Invitations to build other "Habitats" elsewhere followed, and the one presented in the book is Habitat II New York, which was not built "due to faltering developer interest in realizing it." Safdie explains to Michael J. Crosbie how the Habitat idea was adapted to a new location, a waterfront site near the Brooklyn Bridge that necessitated a different structure: "You concentrate the structure in big-scale elements of masts and cores, and hang it all. You could span with trusses and hang it." The catenary structural system needed to support the pyramidal forms is evident in sketches by Safdie as well as photographs of models made for Global Citizen: The Architecture of Moshe Safdie, the traveling exhibition I saw at the National Academy Museum in 2016. Models from that show are peppered throughout the book, fleshing out the sketches, models, and renderings made at the time of each design. A few new renderings of early projects show Safdie exploring old ideas with new technologies.
Another highlight, also in NYC, is Columbus Center, a mixed-use project with two towers on the western edge of Columbus Circle, designed for Salomon Brothers in the mid-1980s. The 62- and 69-story towers would have risen on the site of the New York Coliseum, an unloved expo center dreamt up by Robert Moses and designed by Leon and Levy. Considerably taller than everything around it at the time, Columbus Center was famously criticized by the Municipal Art Society and hundreds of protesters who stood in Central Park and simultaneously opened their umbrellas to show the shadows that the towers would cast. The book does not mention this so-called "Umbrella Protest" or the lawsuit MAS filed to stop the project — "the project halted after the withdrawal of Salomon Brothers as developer," per the project description — but it does include pieces Safdie wrote in the New York Times that took issue with articles by then Times architecture critic Paul Goldberger, who was not a fan of the design.
All these years later — seventeen years after SOM's shorter two-tower development for Related Companies was built instead — the highly developed Columbus Center scheme seems like a missed opportunity. The differences in shadows cast by Time Warner Center versus Columbus Center are insignificant, especially when considered alongside the Billionaires' Row towers that now sit just south of the park. And while a lot of the parts in the built and unbuilt schemes are similar (two towers, curved base with atrium and shops, mix of uses in the towers, etc.), Safdie's scheme is more formally inventive than the glass towers of David Childs; Safdie's scheme would have made a bigger imprint architecturally. That's all history, though, like the other unbuilt projects collected here, some fairly recent. No wonder the book ends with "The Lessons of Unbuilt Architecture," where Safdie and Crosbie discuss how even the unbuilt works "have lessons for the long term."
SPREADS: 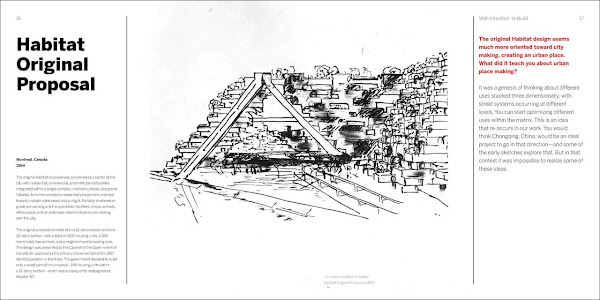 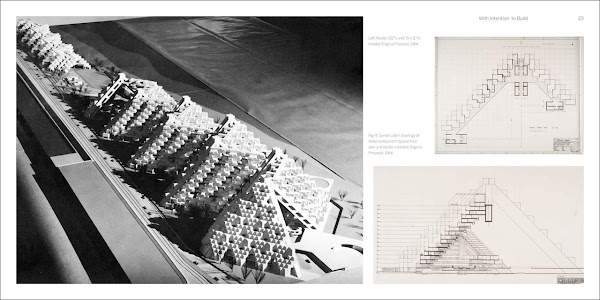 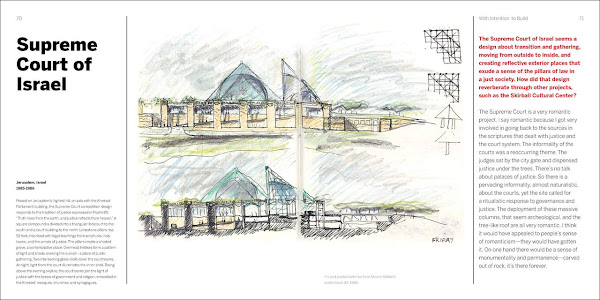 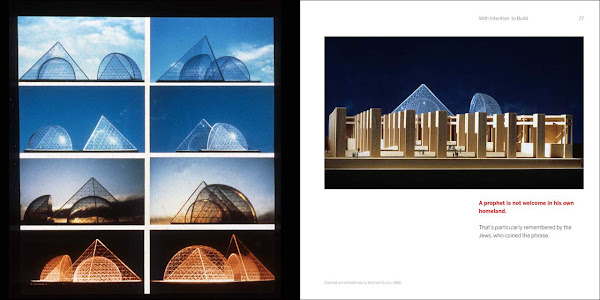