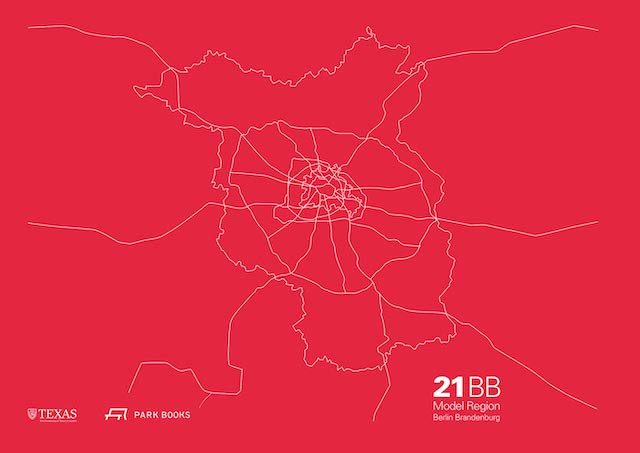 21BB—Model Region Berlin-Brandenburg: Analyses and Visions for the 21st Century
Barbara Hoidn and Wilfried Wang (Editors)
Park Books, in cooperation with The University of Texas at Austin, School of Architecture; February 2021

PUBLISHER'S DESCRIPTION:
How should a diverse metropolitan region such as the German capital Berlin and the surrounding state of Brandenburg reinvent itself, while preserving its character, nurturing its attributes, and simultaneously preparing for climate change? 21BB—Model Region Berlin-Brandenburg offers an analysis of these important strategic questions, along with constructive solutions.
As a comprehensive survey of the entire Berlin-Brandenburg region, this book presents essays, striking visualizations, maps and graphics, and projects in a large-format atlas. Its findings are based on extensive research at University of Texas at Austin’s School of Architecture (UTSOA) into complex subjects such as the circular economy, social equity, mobility, energy and water management, environment, population growth and density, inclusion, and urban culture. Wide-ranging essays are supplemented  with proposals developed by UTSOA’s students. The book also features a radical urban and regional designs submitted to an international competition for Berlin-Brandenburg’s long-term development by Berlin-based firm Hoidn Wang Partner. Given the urgent need for a public debate about the future of Germany’s capital region, this volume offers a solid factual basis and offers new approaches, projects, and ideas.
Barbara Hoidn is visiting associate professor and a fellow of the O’Neil Ford Centennial Chair in Architecture at the University of Texas at Austin. She is cofounder of the Berlin-based architectural firm Hoidn Wang Partners. Wilfried Wang is an architect and O’Neil Ford Centennial Professor in Architecture at University of Texas at Austin. She runs a design and urban planning firm Hoidn Wang Partner in Berlin with Barbara Hoidn.
REFERRAL LINKS:

dDAB COMMENTARY:
Some days it seems that architectural publishing is sustained by just two types of books: architectural monographs and academic publications. The first is nothing new, as monographs have long been a means for architects — at least the ones with generous marketing budgets — to promote themselves and hopefully generate more commissions. Occasional diatribes on the death or endangerment of the monograph have not led to an abatement of them; they seem more prevalent than ever, if anything.
The second type — by which I mean books born from design studios, research projects, exhibitions, symposia and other proceedings at schools of architecture, not student-run journals or books written by professors — are not new either. I trace academic publications like these back to Learning from Las Vegas, first published in 1972 and documenting a Yale architecture studio from 1968. Even if such books have been produced fairly regularly in the subsequent half-century, they have gained momentum in recent years, to the point that most of the books I receive these days are either a monograph or book co-published by a school of architecture — or so it seems.
These thoughts are entering my mind now as I flip through 21BB—Model Region Berlin-Brandenburg, a big, ambitious book published by Park Books in cooperation with The University of Texas at Austin, School of Architecture. One of the book's four parts consists of student projects from six advanced design studios taught by Barbara Hoidn and Wilfried Wang over the course of three years, between 2016 and 2018. With their mix of regional maps, neighborhood plans, and renderings of opens spaces, the projects reminded me of Beyond Petropolis, the book that documented my year of grad school at City College fourteen years ago.
Like that book I was involved with, 21BB balances the student projects with essays and other content. (If books like these were just student work, I can't help but wonder, who would buy them besides the students, their friends and family, and perhaps architecture school libraries?) In the case of the book on the Berlin-Brandenburg region, eight essays come before the student projects. Then, in part three, are analytical maps produced by the firm of Hoidn and Wang. These maps, complete with numerous vellum overlays, appear to be the content driving the large A3 (equivalent to tabloid) paper size, landscape format, and lay-flat binding. Whatever the case, the student projects also read well across such large pages.
The last of the book's four parts is Hoidn Wang Partner's submission for the International Urban Planning Competition for Berlin-Brandenburg 2070 that took place in the second half of 2019, and for which the UT Austin design studios must have been a great help. That competition is documented in the second of the two-volume Unfinished Metropolis recently published by DOM Publishers, though I'm not sure if Hoidn Wang's and other "not awarded" entries made the cut. If not, the present book by Park Books and UT Austin gives their project wide exposure — potentially more than the winners of the competition. This book is recommended for other architecture/urban design/urban planning students with similarly large-scale studio projects, but with its expensive cover price I'm guessing they'll look for it in their architecture school's library.
SPREADS: