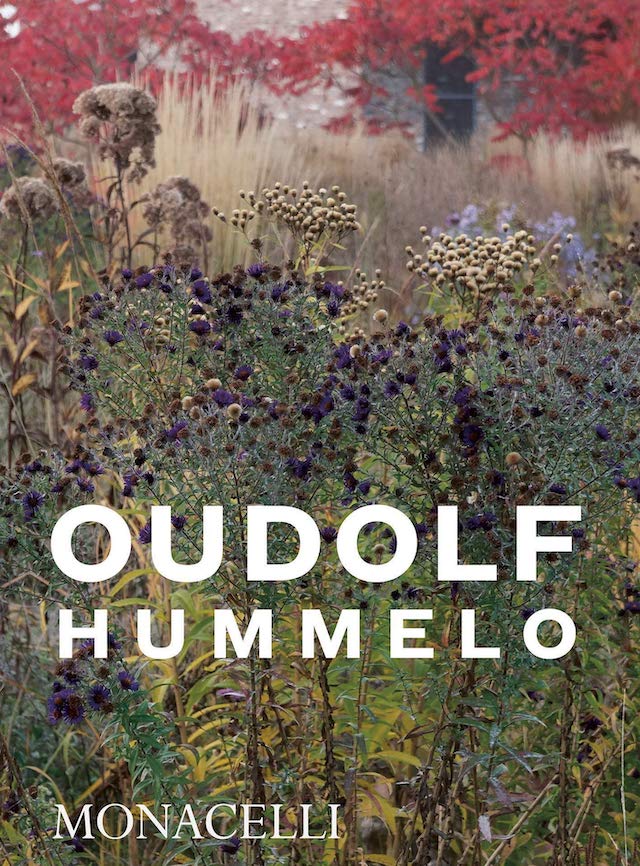 PUBLISHER'S DESCRIPTION:
An intimate look at the personal garden of the Dutch landscape designer renowned for his plantings at the High Line in New York City, and Lurie Garden at Chicago’s Millennium Park.
Hummelo—near the village of the same name in Gelderland in the eastern Netherlands—is visited by thousands of gardeners seeking inspiration each year. It is Piet Oudolf’s home, his personal garden laboratory, a former nursery run by his wife Anja, and the place where he first tested new designs and created the new varieties of perennials that are now widely available.
A follow-up to Oudolf’s successful Landscapes in Landscapes—Hummelo tells the story of how the garden has evolved over the past three decades since Oudolf, Anja, and their two young sons moved onto the property, with its loamy sand and derelict, wood stove-heated farmhouse, in 1982. Text by noted garden author and longtime personal friend Noel Kingsbury places Hummelo in context within gardening history, from The Netherlands’ counterculture and nascent green movement of the 1960s, to prairie restoration in the American Midwest, and shows how its development has mirrored that of Oudolf’s own outstanding career and unique naturalistic aesthetic. ...
Piet Oudolf is an influential Dutch garden and landscape designer at the forefront of the New Perennial movement and the author of numerous books on gardening and landscape design. He has constructed dozens of residential, commercial and institutional gardens and his projects can be found throughout The Netherlands, England, Ireland, Germany, Sweden and the U.S. ... Noel Kingsbury is an internationally acclaimed garden writer and the author of more than 20 books (including several with Oudolf), as well as a teacher, lecturer, and garden designer.
REFERRAL LINKS:

dDAB COMMENTARY:
Three years ago, the feature-length documentary Five Seasons: The Gardens of Piet Oudolf was released. Coming three years after the first edition of Hummelo, written by Noel Kingsbury on the occasion of Oudolf's 70th birthday, the book and film can be seen as the culmination of Oudolf's career, tracing a trajectory from a super-local garden designer in the Netherlands to an international superstar in demand around the world. Consistent in the decades spanning from his purchase of an acre of land in Hummelo, a small village east of Arnhem, in 1981 to the publication of the book and the release of the film, have been Oudolf's embrace of perennials and grasses, his wife Anja (first spread, below), and his network of friends and collaborators who share his enthusiasm for naturalistic plantings and gardens. As such, the creations documented in the book that takes its name from the Oudolfs' home and longtime nursery are remarkably consistent, regardless of place and purpose.
Hummelo, just released in an expanded paperback edition, tells the story of Oudolf's rise over the last four decades, but it does it in a way that is more educational than laudatory. Early in the book Kingsbury points out how Oudolf is not concerned with status: "Piet is actually distinctly unimpressed by other people's fame, so is perhaps unlikely to see himself on a pedestal either." This modesty, as well as his sense of humor, came across when I saw Oudolf at a screening of Thomas Piper's film about him. It comes across throughout the book as well, both in Kingsbury's words and in the many photographs taken by Oudolf, be they of his gardens, the places he's visited, or the snapshots of his friends.
The book tells Oudolf's story across three parts, clearly following the direction of his career: "Hummelo, the Beginning," "Becoming Known," and "International Commissions." Inserted throughout the book are numerous sidebars, set aside from the rest by colored backgrounds (third spread); these highlight garden designers who influenced him (e.g. Mien Ruys), the role of photography in his experience of gardens (he takes a lot of early-morning photos of Hummelo and was often with a camera around his neck in Five Seasons), techniques of laying out plants (e.g., scatter plants, block planting, matric planting), and so forth. With the sidebars, many full-bleed photographs, and Kingsbury's informative text, the book is like a leisurely stroll through the life and work of Piet, Anja, and the garden that has been their anchor for forty years.
At one point in the book Kingsbury writes that "a fundamental reason for Piet's success lies perhaps in his ability to balance coherence and complexity." (Maybe Oudolf should write a manifesto titled Complexity and Coherence in Garden Design in the vein of Venturi's famous book?) Later, in one of the sidebars, the author does a good job in attempting to state why Oudolf has gained such international acclaim, highlighting three factors: plant selection, plant structure, and spatial arrangement. For the uninitiated, the gardens of Oudolf may look arbitrary, as if "scatter plants" meant seeds were literally scattered across the soil. But there is a clear method to Oudolf's designs, one that comes across in the drawings peppering the book and that was clearly nurtured at Hummelo, where Piet and Anja cultivated plants and grasses and shared them with fellow gardeners. The nursery may have closed the same year the film debuted — marking, as Kingsbury writes, the "end of an era" — but the influence of Oudolf can be found in the enthusiastic embrace of "natural gardens" by so many clients, designers, and gardeners all over the world.
SPREADS: 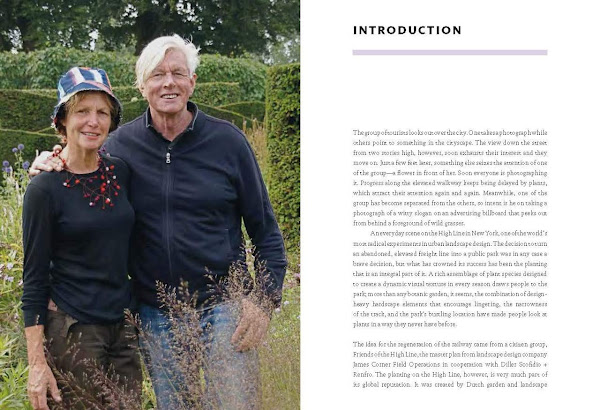 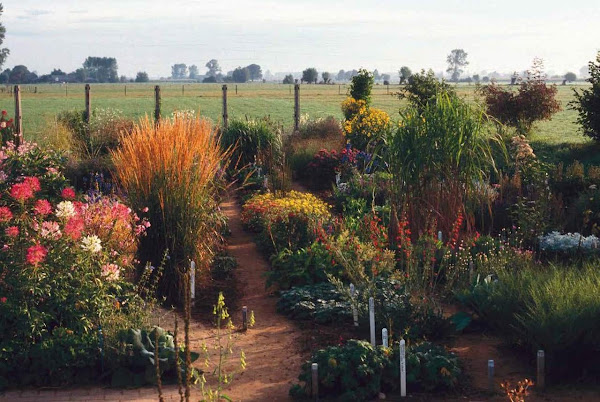 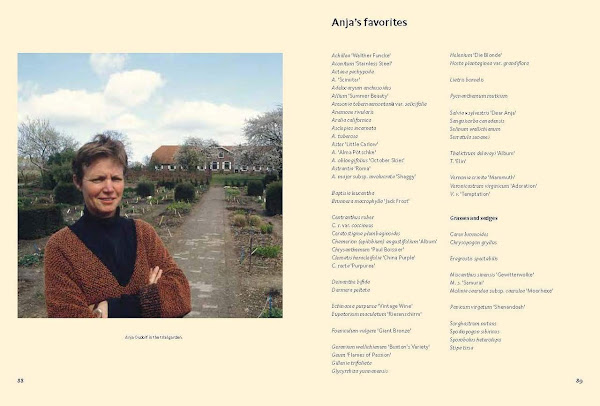 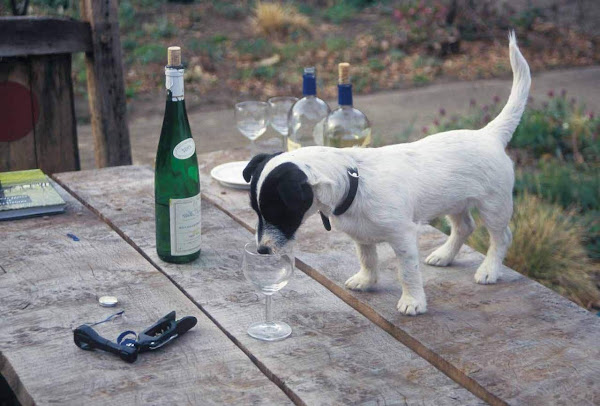 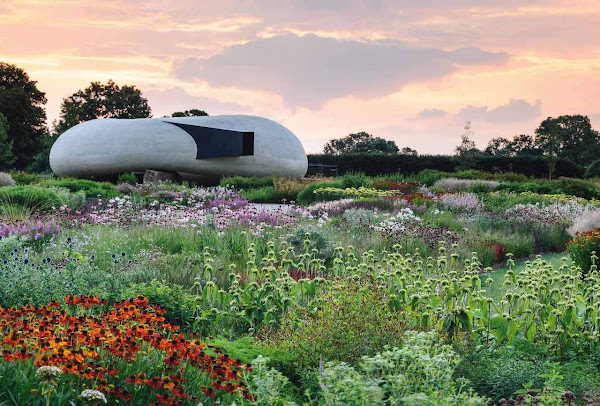