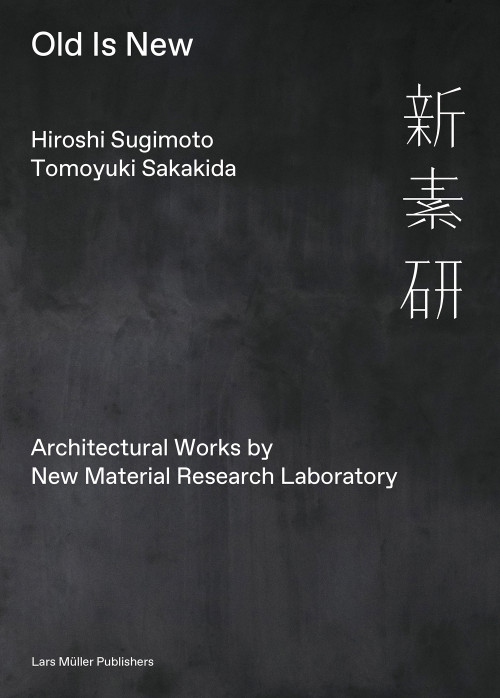 PUBLISHER'S DESCRIPTION:
"The oldest things are the newest" – this paradoxical idea is present throughout the oeuvre of contemporary Japanese artist and photographer Hiroshi Sugimoto. In 2008, Sugimoto and the architect Tomoyuki Sakakida founded the New Material Research Laboratory, an architectural firm that researches and develops “new materials” from known materials and techniques by applying a different approach and interpretation. The Laboratory's aim is to rethink the use of old materials passed on to us from ancient times, the Middle Ages and the modern period. It advocates for a reconnection of the present with a bygone era, and to extend that connection to the future through architecture.
Old Is New delves into the art and architecture, as well as the archaeological philosophy and contemporary practice, of the New Material Research Laboratory. Richly illustrated, the book shows the choice of materials for each project. The photographs in itself are compositions, presenting scenes that show a balance of the present and past. Sugimoto and Sakakida, discussing their practice and approach, wrote the principal texts of this volume. Additional text contributions delve into the origin of the laboratory’s design ethos rooted in Japanese tradition and aesthetics and their historical context. The book also includes an annotated index of materials and classical Japanese techniques with information drawn from the laboratory’s research.
Hiroshi Sugimoto has received international recognition as a photographic artist through his solid technique and clear concept seen in series such as Seascapes and Theaters, and his works are collected by major art museums worldwide. In recent years he has expanded his field of activity to literary and architectural work. In 2008, he founded New Material Research Laboratory together with the architect Tomoyuki Sakakida, who studied architecture at the Kyoto Institute of Technology and worked for Nihon Sekkei Inc. before establishing his own practice, Tomoyuki Sakakida Architect and Associates, in 2003. In parallel with running the practice, he worked for Waro Kishi + K. Associates / EX from 2003 to 2006. In 2008 Sakakida founded New Material Research Laboratory with Hiroshi Sugimoto, and since 2013 Sakakida is the director.
REFERRAL LINKS:

dDAB COMMENTARY:
Although it's been about 25 years since he produced them, I think most architects are familiar with artist Hiroshi Sugimoto for his blurry black-and-white photographs of the Guggenheim, the Villa Savoye, and other icons of modern architecture. I saw them in 2003 at MCA Chicago, when I learned that not only did Sugimoto take the blurry "twice infinity" photographs, he designed the layout of the exhibition. "Walking into each gallery," I wrote at the time, "the visitor is confronted by fifteen gray, free-standing slabs that almost reach the translucent glass ceiling, the photos turning their backs on the visitor." While the exhibition design pointed to the versatility of Sugimoto and his desire to merge his art and their display, I'll admit I did not foresee a full-fledged architecture career in his future. But that is just what happened with Shinsoken, or New Material Research Laboratory, which was established in 2008 by Sugimoto and architect Tomoyuki Sakakida.
Early in this first monograph on Shinsoken, Fumihiko Suzuki, in an interview with the two partners, describes three routes by which Sugimoto moved into architecture. Two were already mentioned: his Architecture series of photographs and "his practical concern with how to structure the spaces where his [...] works were displayed." Suzuki further describes the third route as Sugimoto's "profound understanding of traditional Japanese buildings and gardens." More than the first two, this last consideration greatly informs the philosophy of the studio, which is evident in the name of the monograph and is spelled out on the Shinsoken website: "In spite of its name, [the New Material Research Laboratory] examines not only common materials and techniques in contemporary architecture, but also those from ancient and medieval times." In turn, Shinsoken "undertakes the challenge of reinterpreting and reimagining the use of these materials in the present" and therefore has the goal "to preserve and transmit almost-forgotten techniques, improving upon them so they can be employed in a modern setting."
My first exposure to the duo's "old is new" philosophy was at the 2014 Venice Architecture Biennale, when they installed the Glass Tea House Mondrian on the island of San Giorgio Maggiore. Sugimoto, who wrote all the project descriptions in this monograph, says he designed the tea house based on Sen no Rikyu's 16th-century tea house in Kyoto but "also transmuted the introspective, closed space into its exact opposite: a free, open space with walls of glass." The glass box, propped on legs in a shallow pool and reached by stone and wood steps, was definitely an odd presence in Venice (third spread, below), as it was most likely in Versailles. Recently it was moved to the Kyoto City KYOCERA Museum of Art, the last stop on its three-city tour, where it's a bit more in its element. Whatever its context, the Glass Tea House Mondrian illustrates Sugimoto and Sakakida's willingness to merge tradition and modernity; put another way, there doesn't appear to be any either/or thinking in their work.
Of the dozen projects documented in the "Concepts and Works" chapter, the one that grabbed my attention the most is the Private Residence Ukitsubo, also called "The Floating Inner Garden" (second spread). The project is a full-floor residence in one of the top floors of 432 Park Avenue, the supertall skyscraper designed by Rafael Viñoly with 10-foot-square windows set in a grid of concrete columns and beams. In theory, the repetitive frame that is the setting of the apartment is not unlike the galleries of MCA Chicago, where grids were also in abundance. Sugimoto actually sees the square frames of the Manhattan skyline and distant horizon as similar to his work, specifically the Seascapes series. So his main insertion into the space are shoji screens at the windows, one lower and one upper, such that closing the former would allow the sky to be framed, while closing the latter would invert the effect and focus views on the surrounding buildings. Elsewhere in the residence are a bonsai garden, a tea room with tatami mats, huge stones in the "his" master bath's rain shower, and other elements that comprise "a Japanese space" in the New York high-rise.
Two more chapters follow the 160 pages of "Concepts and Works": "Materials and Techniques" and "List of Works with Plates." The latter (fourth spread) is a welcome chapter, as it features consistently rendered drawings and additional text on the projects from earlier in the book, such as the residence in 432 Park Avenue, as well as including more projects that are not in the works chapter. But it's the in-between chapter on the materials and techniques deployed by Shinsoken that is the most philosophical, and therefore potentially most important, in the book. Sugimoto and Sakakida describe in words how they use "techniques on the verge of being forgotten" and "materials that demand high levels of artisanal skill," while the photographs convey the results: carefully composed and controlled environments crafted from natural materials. Old may be new, but only, it appears, in the service of minimalist settings free of clutter and other signs of contemporary life.
SPREADS: 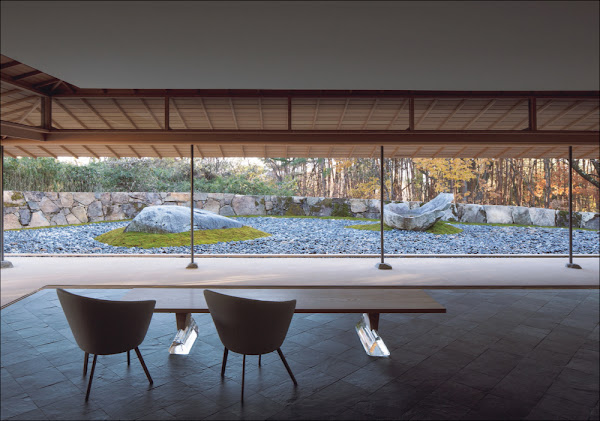 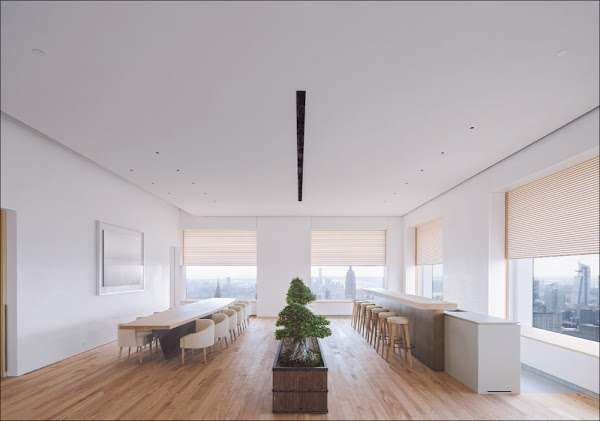 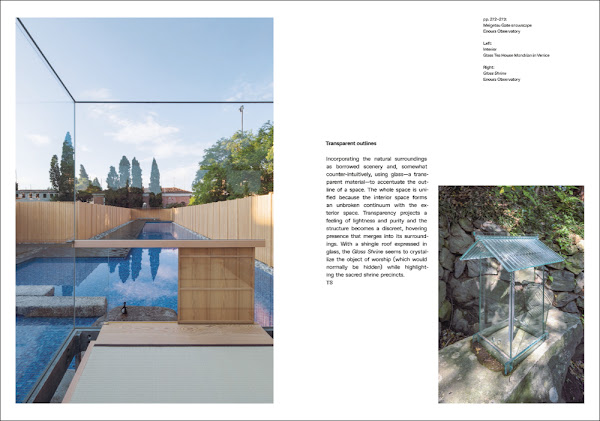 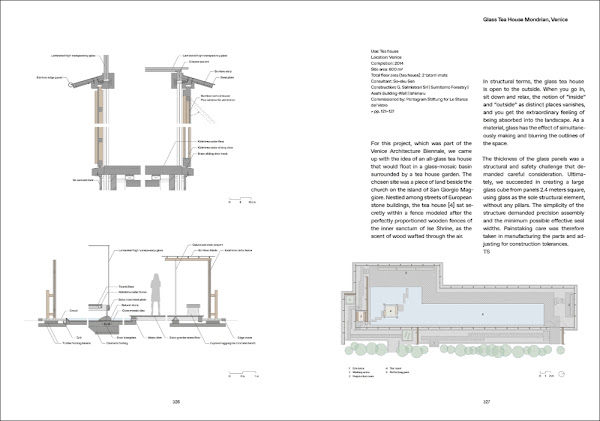