The Art Museum in Modern Times 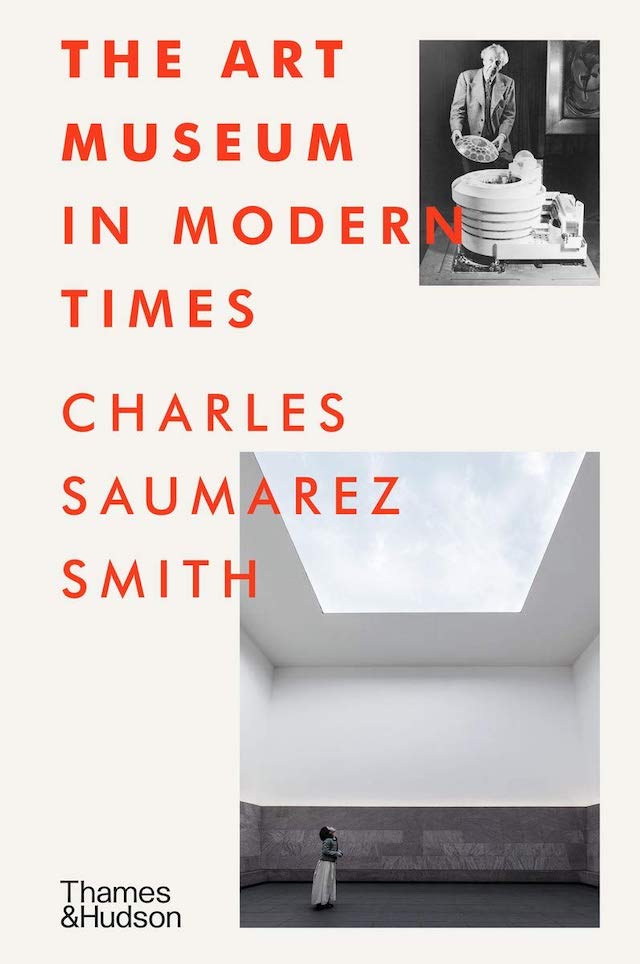 PUBLISHER'S DESCRIPTION:
How have art museums changed in the past century? Where are they headed in the future? Charles Saumarez Smith is uniquely qualified to answer these questions, having been at the helm of three major institutions over the course of his distinguished career. For The Art Museum in Modern Times, Saumarez Smith has undertaken an odyssey, visiting art museums across the globe and examining how the experience of art is shaped by the buildings that house it.
His story starts with the Museum of Modern Art in New York, one of the first museums to focus squarely on the art of the present rather than the past. When it opened in 1939, MoMA’s boldly modernist building represented a stark riposte to the neoclassicism of most earlier art museums. From there, Saumarez Smith investigates dozens of other museums, including the Tate Modern in London, the Getty Center in Los Angeles, the West Bund Museum in Shanghai, and the Centre Pompidou in Paris. He explores our shifting reasons for visiting museums, changes to the way exhibits are organized and displayed, and the spectacular new architectural landmarks that have become destinations in their own right.
Charles Saumarez Smith has been director of the United Kingdom’s National Portrait Gallery, director of the National Gallery, and secretary and chief executive of the Royal Academy. He is the author of East London, The Company of Artists: The Origins of the Royal Academy of Arts in London, and The National Gallery: A Short History, among other titles.
REFERRAL LINKS:

dDAB COMMENTARY:
A lot has happened in the world of art in the last fourteen months. Art museums have been closed most of this time due to the coronavirus pandemic, with many of them forced to layoff workers and some of them selling artworks to maintain salaries in the face of severe restrictions that include reduced capacities when (finally) reopening and the inability to hold the events that usually contribute large amounts of revenue. Earlier this year, in the midst of stay-at-home measures, NFTs (non-fungible tokens) took off, with nearly $70 million spent on Beeple's Everydays – The First 5000 Days in an auction in March and a slew of lower-ticket NFTs making headlines since. It's too early to say how either the pandemic or the mad rush for artworks situated in virtual environments will impact the course of art museums, but it's basically a guarantee that museums will continue to evolve in the coming years and decades, especially if Charles Saumarez Smith's The Art Museum in Modern Times is any indication.
Saumarez Smith's book is a brisk tour through around forty art museums around the world, from the Museum of Modern Art in New York City in 1939 (and transformed in 2004) to the West Bund Museum in Shanghai in 2019. The selected museums are briefly profiled across a few pages with at least a couple of images each. The short descriptions are from exhaustive, obviously, but they allow Saumarez Smith to hone in on the most important aspect(s) of each museum, be it their clients, their buildings, or the artworks they contain. The case studies are organized into four chronological chapters, tracing "The Modern Museum," "The Postmodern Museum," "Museums for the New Millennium," and "The Museum Reinvented."
There are numerous ways to digest this book, and this reviewer gravitated to the roughly fifteen museums I've been able to see in person. Reading about, for example, the Guggenheim, the Neue Staatsgalerie, Dia:Beacon, and Muzuem Susch — to highlight one each in the book's four main chapters — conveyed Saumarez Smith's means of alternately focusing on clients and architects. Clearly he believes clients are just as important as architects in defining the shape of art museums; this is no surprise, given that he has been on the client side through more than one museum directorship. My approach in tackling the book did not take me to the museums he was involved with initially, but returning to those yielded insights that could only come from him being part of the process.
Saumarez Smith's involvement in architecture projects at the Royal Academy of Art and other institutions greatly informs the book's fifth and last chapter: "Key Issues." Here, in an effort to take stock of the last half-century — though primarily the years from 1982, when he started working at museums, to near the present — and address some of the challenges museums are now facing, the author touches on the roles of clients and architects, as is to be expected, as well as to the rise of private museums, the "morality of wealth," globalization, and the "digital world," among other issues. The key issues find him referring to museums earlier in the book and reiterating timelines that should be familiar to readers by the time they get to this chapter; the latter is helpful in getting a clear understanding of Saumarez Smith's take on the evolution of art museums in modern times, while the former pushed me to go back and read such case studies as the one on MONA (The Museum of Old and New Art), a museum I had no familiarity with before opening this book.
The diversity of museums in the book is rich and rewarding, so when it comes to prognosticating on the future of them, it's hard to say which approach, if any, is most relevant moving forward. Saumarez Smith mentions LACMA, the expansive building designed by Peter Zumthor for Michael Govan, in terms of breaking down canons and setting aside history in favor of other themes. But he also mentions a likely reduction in "a decades-long 'physical infrastructure' binge" that points to LACMA being a swan song in a trend of big-budget museums that can be traced back to the Guggenheim Bilbao. Perhaps we'll see Muzeum Susch and other smaller museums rise in their place, somehow using their size and other traits to their advantage in the face of new and unexpected challenges. Whatever the case, new art museums will be built and architects will be there to design them — whatever form they take.
SPREADS: 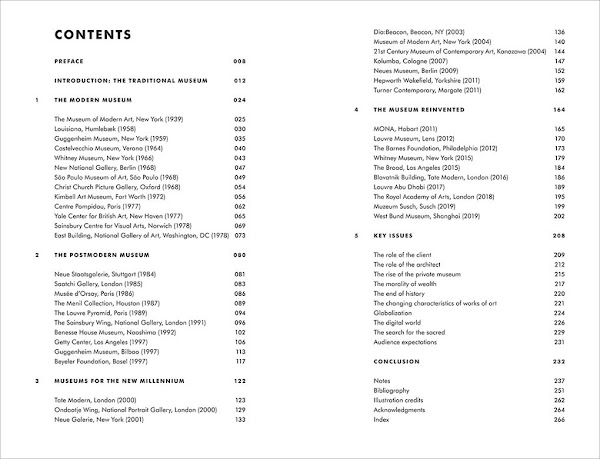 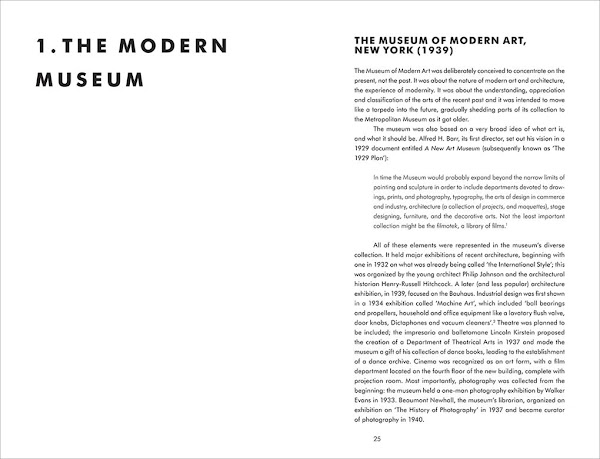 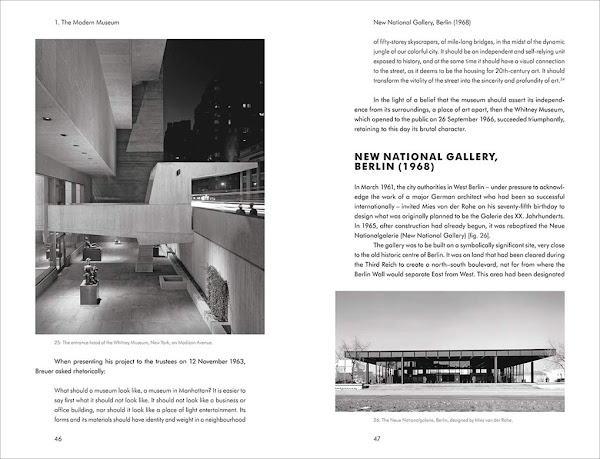 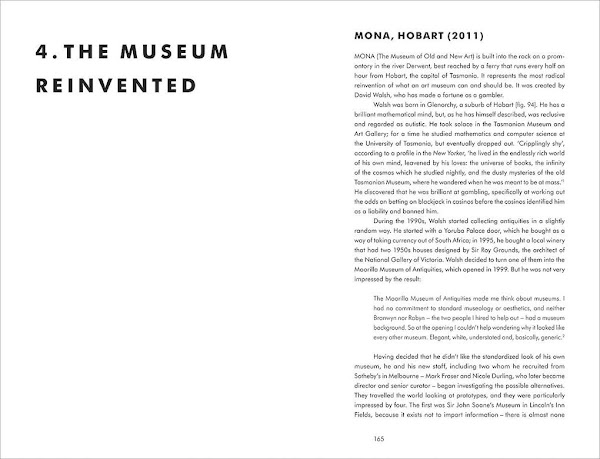 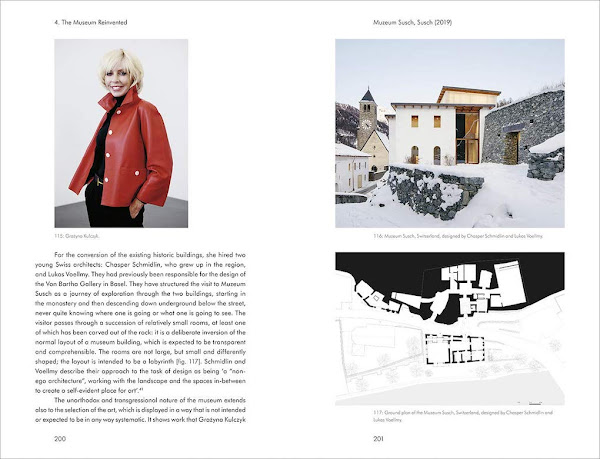