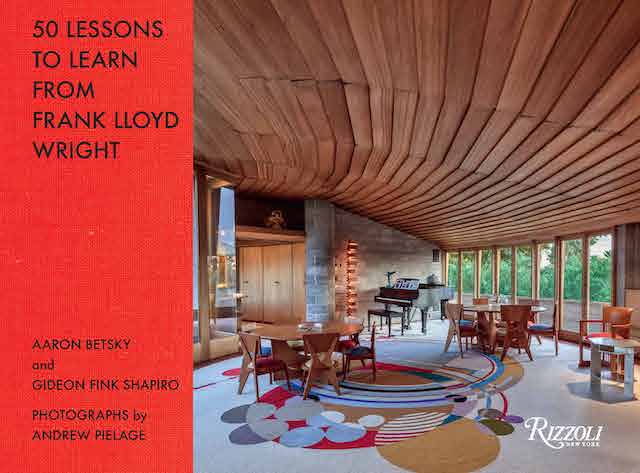 PUBLISHER'S DESCRIPTION:
Unlike recent books focusing on Wright’s tumultuous personal life and the Taliesin Fellowship, and equally unlike certain works that paint Wright as a mythical hero or genius, this handsome and valuable volume aims to reveal some of the design tools Wright used to create exceptional architecture, interiors, and landscapes—and how we may glean insight from an American master and find inspiration for the thoughtful design of our own homes. By means of succinct examples, pithy texts by noted architecture experts Aaron Betsky and Gideon Fink Shapiro, and evocative visuals provided by photographer Andrew Pielage, they share fifty lessons, or "learning points," with an eye to Wright-designed houses and interiors, ranging from "Let Nature Inspire You," "Screen, Don’t Close," and "Embroider Rooms with Textiles," to "Look to Asia," "Design for Resilience" and "Balance the Whole."
Each lesson is accompanied by color photographs, original Wright drawings, newly commissioned diagrams, thoughtful analysis by the authors, and pearls of wisdom gathered from the master's trove of writings on architecture and design.
Beyond specific lessons, this volume offers an informal yet richly detailed introduction to this seminal figure, world-famous for his romantic Fallingwater and magical Guggenheim Museum, and will be of much interest to the budding architecture enthusiast as well as to the interior designer, to those seeking ideas for their own homes, and to fans of Frank Lloyd Wright looking for just the right book.
Aaron Betsky is a critic, curator, educator, lecturer, and author of more than a dozen books. He is director of Architecture + Design at Virginia Tech. Previously, he was dean of the Frank Lloyd Wright School of Architecture and, after independence, president of the School of Architecture at Taliesin. Gideon Fink Shapiro is an architecture and design writer based in New York and co-author of The New Residential Colleges at Yale: A Conversation Across Time. Andrew Pielage is an internationally published architectural and travel photographer based in Phoenix, Arizona, on a mission to photograph all remaining Frank Lloyd Wright designs. His work has appeared in such publications as National Geographic Traveler and Vanity Fair.
REFERRAL LINKS:

dDAB COMMENTARY:
There is something inevitable about this book. Aaron Betsky is a prolific architecture critic who weighs in on just about every issue that makes architecture headlines, something he did even as his day job shifted to heading the School of Architecture at Taliesin (formerly the Frank Lloyd Wright School of Architecture, now simply The School of Architecture), a position he served from 2015 to 2020, and something he still does as director of Virginia Tech’s School of Architecture + Design. It would be hard for any architect whose office and home alternated between Taliesin in Wisconsin and Taliesin West in Arizona to not be influenced by Wright's architecture, but for someone like Betsky it means a book about Wright was bound to happen. For 50 Lessons to Learn from Frank Lloyd Wright, Betsky teamed up with fellow writer Gideon Fink Shapiro and photographer Andrew Pielage to craft a handsome little coffee table book that tries to "show that Wright is still relevant," they write in the preface, "and that there's a lot to learn from his work without getting bogged down in his cult of personality."
Forty-nine of the fifty lessons are organized into seven thematic chapters with paired terms: "Influences and Inspiration," "Site and Landscape," "Design and Society," "Space and Experience," "Composition and Movement," "Building and Body," and "Abstraction and Cosmos." Separate from these chapters is the first of the numbered lessons: "Break the box," which could easily fit inside one or two of the chapters but takes on special significance on its own at the beginning of the book. For Betsky and Shapiro, breaking out of the book is physical, with planes slipping and sliding past each other "so that light and air can come into the corner," but also symbolic, with boxes "limit[ing] our dreams and aspirations." Though not explicit in this lesson, perhaps Wright's greatest impact on architecture — in the widest sense of the word, not just capital-A architecture — was his opening up of domestic spaces previously compartmentalized; his influence is felt every time I see interior partitions knocked down (boxes literally broken) during a home improvement TV show, as inevitably happens in just about every one of them.
Racking my brain to ascertain the first lesson I learned from Wright, I think back to high school, when I was fortunate enough in my suburban-Chicago upbringing to have classes in drafting and architecture as well as an urban studies class that took the occasional field trip to downtown Chicago but also Oak Park, where Wright's Home and Studio is located among a density of other early Wright buildings. I remember a tour guide or teacher pointing out how Wright "hid" the entrances to the houses he designed, setting them perpendicular to the street or tucking them beneath low eaves. Such a lesson is not on the admittedly subjective list of fifty created by Betsky and Shapiro, but #33, "Turn and turn again" (third and fourth spreads, below), comes pretty close. This lesson is one of the better ones in the book, especially in the way it uses words and images together for explication: A couple sentences in the brief text are highlighted in red to accentuate important points; one of Richard Quittenton's collage-diagrams sits opposite the text, larger than the others he created for the book; and on the following spread are six step-by-step photographs that clearly relate to a path drawn in red on top of Wright's plan of Taliesin West.
Not all of the lessons are so precise in their meaning as #33 as to merit photographs and drawings so intimately wed. For the most part, Pielage's photographs could be swapped at random between lessons and still effectively help convey the main points of each lesson. This says more about the consistent qualities of Wright's architecture than those of Pielage's photographs, which have too much high dynamic range for my liking. Number 23, "Compress and release" (first two spreads) is a lesson that could be illustrated with almost any Wright project, from early ones like Unity Temple to his last masterpiece, the Solomon R. Guggenheim Museum. The first building actually illustrates about half of the lesson, while the text mentions the latter, with its soaring atrium just steps beyond the low-ceiling entry. Clearly Wright's architecture still enthralls architects and critics familiar with his work, and through this book it offers lessons to younger generations of students who have yet to experience the joys of Wright's buildings.
SPREADS: 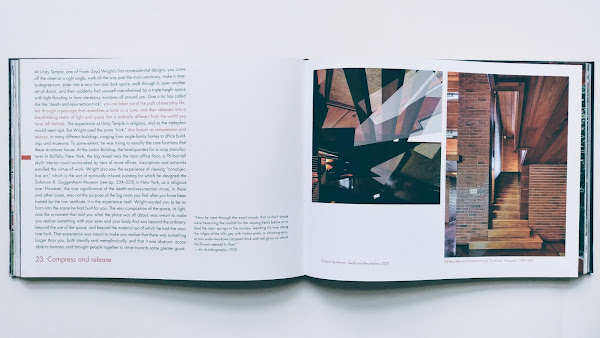 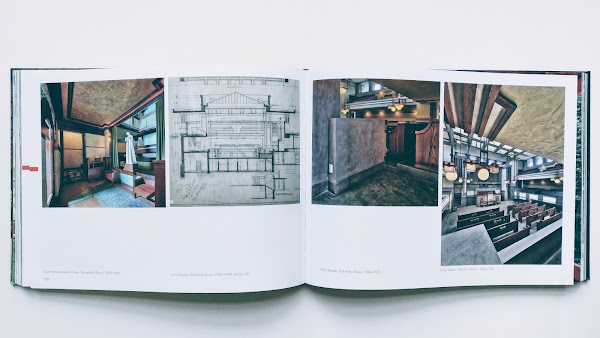 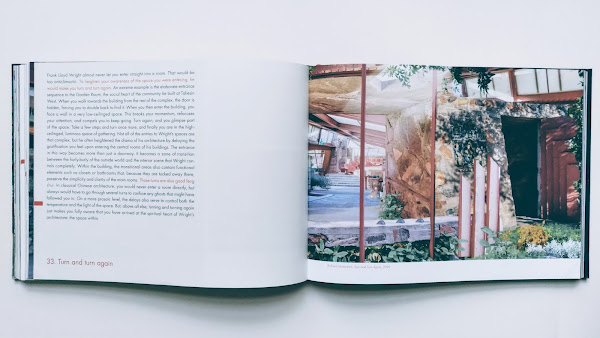 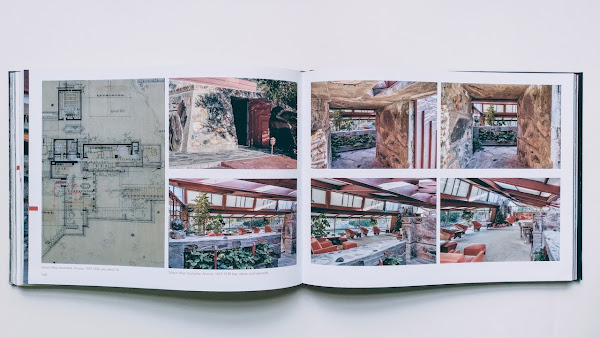