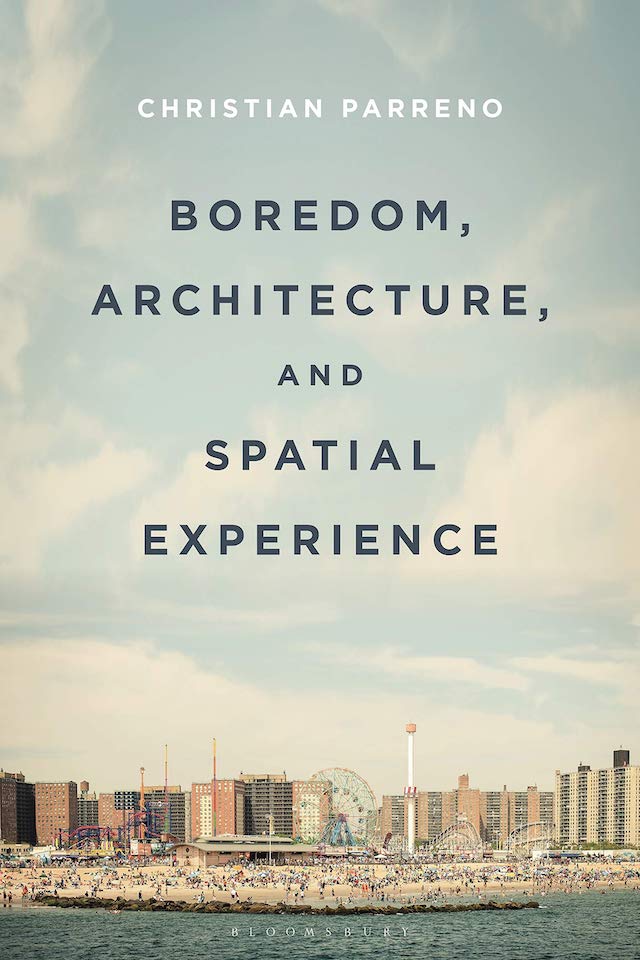 PUBLISHER'S DESCRIPTION:
Boredom is a ubiquitous feature of modern life. Endured by everyone, it is a by-product of modernity, and of situations, spaces and surroundings. As such, this book argues, boredom shares an intimate relationship with modern architecture – one that has been little-explored in architectural history and theory.
Boredom, Architecture and Spatial Experience explores that relationship, showing how an understanding of boredom affords us a new way of looking at and understanding the modern architectural experience. It reconstructs a series of episodes in architectural history from the nineteenth century to the present, to explore how boredom became a normalized component of modernity, how it infiltrated into the production and reception of modern architecture, and how it serves to expose moments of crisis in the architecture of the twentieth century.
Erudite and innovative, the work moves deftly from architectural theory and philosophy to art theory and sociology to make its case. Combining archival material, literary sources and illuminating excerpts from conversations with practitioners and thinkers (including Charles Jencks, Rem Koolhaas, Sylvia Lavin, and Jorge Silvetti), it reveals the complexity and importance of boredom in the experience and practice of architecture.
Christian Parreno is Assistant Professor of History and Theory of Architecture at Universidad San Francisco de Quito, Ecuador.
REFERRAL LINKS:

dDAB COMMENTARY:
Is "boring" a thing in architecture now? A couple of months ago I featured Paul Preissner's Kind of Boring, which functions as a monograph on the Chicago architect but also as a manifesto for "making a kind of architecture which explores basic form, anonymous history, and the effects of indifference and inattention to make the normal weird." Before that I had reviewed Andrew Atwood's Not Interesting, which similarly merges multiple types of architecture books to explore other avenues of architecture besides "interesting"; one of the book's three chapters is called, appropriately, "boring." And now we have Christian Parreno's Boredom, Architecture, and Spatial Experience, a scholarly investigation into boredom in architectural history and theory.
Parreno describes his book in the introduction as "a long essay, interdisciplinary in nature," not "an exhaustive analysis." This isn't surprising, given that boredom is rarely explored in architecture, and when it is it goes by other names, such as generic or ambivalent. Parreno states that his long essay focuses "not on [boredom's] multiple configurations but on the situations that allow its rise." These situations — publications, mainly, but also buildings and symposiums — begin in nineteenth-century Britain and extend to near the present day. Following one chapter that serves as an extension of the introduction, the book has sixteen chapters divided into three conceptual yet chronological parts: "Differential Differences," "Circular Trajectories," and "Extended Thresholds." These parts basically equate, respectively, to nascent boredom in the nineteenth century, the normalization of boredom in the middle of the twentieth century, and boredom as the impetus for postmodernism and what followed it.
The chapters — short, ranging from just four pages to fourteen pages — function like miniature case studies or theoretical investigations of specific texts or other things pertaining to boredom. With my preference for anything modern and/or contemporary, I jumped to part two. One of its chapters, "International Style Confusions: Sigfried Giedion," points out the "Confusion and Boredom" section in the introduction to the fourth edition of Giedion's classic Space, Time and Architecture (mistakenly called Time, Space and Architecture) but spends most of its dozen pages looking at "The International Style – Death or Metamorphosis," a 1961 symposium organized by The Architectural League of New York and mentioned by Giedion in his book. Anchoring the event were "Always Bored Philip Johnson" and "Never Bored Reyner Banham" (the latter's Los Angeles: The Architecture of Four Ecologies is the subject of the following chapter), who addressed formal and technological concerns, respectively, at a time when Modernism was being criticized as monotonous and new avenues were being pursued by architects. The chapter returns to Giedion, whose lecture on "Constancy, Change and Architecture" describes a "disorder" brought about "by an incessant demand for change for change's sake";  Giedion clearly preferred constancy over change.
One of the chapters in part three groups Charles Jencks and Rem Koolhaas together, examining the former's 2002 lecture, "Generic Individualism – the Reigning Style of Our Time – and Its Discontents" and the latter's essay, "The Generic City," in S,M,L,XL. Parreno writes that "bigness and the generic is complicit with governmental hegemonies" and a couple pages later that "the effects of architectural bigness become evident in the poor quality and impassive facilities offered by the capitalist system." Socialism or capitalism, apparently matters little, since big equals boring. The next chapter, the last in the book, bundles two names that don't have the heft of the others mentioned here but will be familiar to anyone reading Parreno's book: Jorge Silvetti and Sylvia Lavin. What's most interesting, though, is how Parreno starts the chapter by commenting on the rise of "it's interesting," with sentiments that echoed Atwood's book to such a degree I was surprised to not see Atwood's 2018 book in the footnotes. Boring may be a thing in architecture now, but apparently that doesn't mean the people writing about it are necessarily reading each other.
Email Post
Labels: bloomsbury history-theory thursday