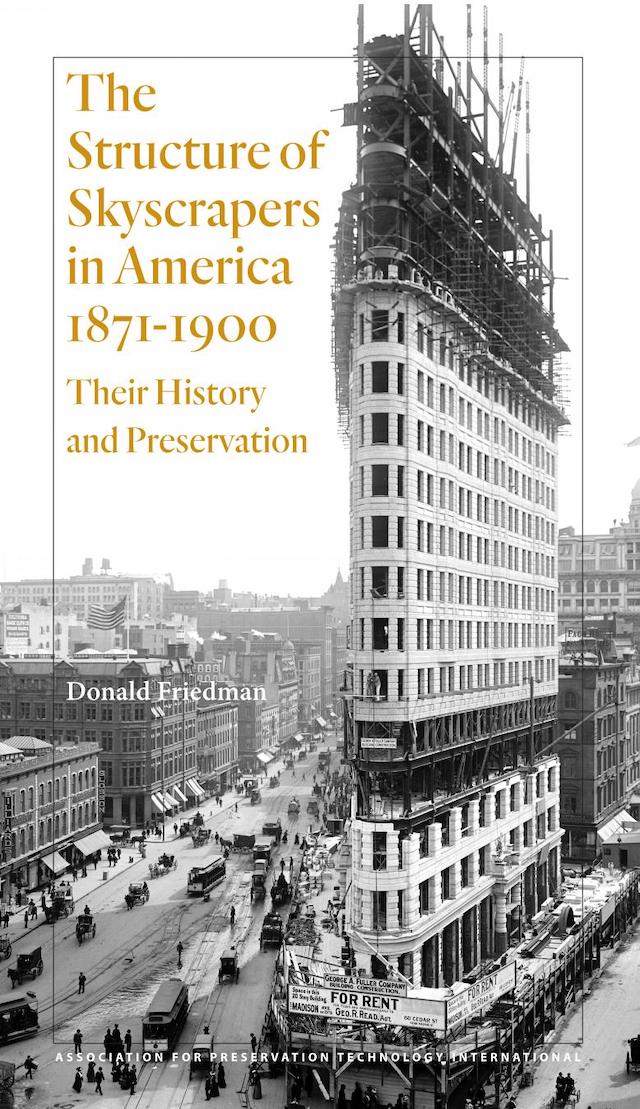 The Structure of Skyscrapers in America, 1871–1900: Their History and Preservation
Donald Friedman
Association for Preservation Technology, October 2020

PUBLISHER'S DESCRIPTION:
In this long-awaited book, award-winning author Donald Friedman presents an illustrated history of the development of the structure of skyscrapers during the last quarter of the nineteenth century. In the first 190 pages, he details the context for the emergence of this new building type and thoroughly explains the cutting-edge technology of construction. Preservation problems are examined in depth.
A separate 200-page section provides construction dates and images for every known building taller than nine stories erected in the United States between 1871 and 1900—a total of 443 individual buildings, both extant and demolished, in 36 cities all across the country, from Boston and New York to San Francisco.
This definitive new book is essential reading—and an unrivaled reference—for anyone who is interested in early skyscrapers and in identifying the more than 300 engineers, architects, and contractors who designed and built them.
Donald Friedman, co-founder of Old Structures Engineering, has 30 years of experience as a structural engineer, working on both the construction of new buildings and the renovation of existing structures. He has taught at the Pratt Institute, the Rensselaer Polytechnic Institute School of Architecture, and the Columbia University Graduate School of Architecture, Planning and Preservation. He has written numerous articles for technical publications and five books on construction, renovation, and engineering.
REFERRAL LINKS:

dDAB COMMENTARY:
In his 1968 book, American Building: Materials and Techniques from the Beginning of the Colonial Settlement to the Present, historian Carl W. Condit — author of the influential The Chicago School of Architecture — asserts that the Home Insurance Building of William Le Baron Jenney, erected between 1884 and 1885, although it "did not embody all the features of the fully developed skyscraper," "marked the culmination of a century's progress in iron-framed construction." The following page includes another assertion, that Jenney's building "was the first extensive application of the internal skeleton and the curtain wall to an office building." These statements have no doubt influenced the starting date of 1884 on the "Early skyscrapers" Wikipedia page, one that points out the academic disagreement of pinning down the first skyscraper but nevertheless labels the Home Insurance Building as the first in "a new class of taller buildings."
Donald Friedman's new book on skyscrapers at the end of the 19th century takes a different approach, setting aside "firsts" in favor of a wider lens that goes back to the conflagrations in Chicago in 1871 and Boston in 1872. Extending his research and analysis to the decade before the wider adoption of skeleton-frame construction in the 1880s allows The Structure of Skyscrapers in America to depict the diversity of tall-building structures as they played out at the time, when numerous techniques were attempted in New York, Chicago, and other American cities before steel frames rose to the top near the end of the century. As such, the Home Insurance Buildings falls in the near-middle of the 29-year time frame, called out as something different from the assertions of architectural histories and Wikipedia articles: Friedman defines it as a "wall-braced cage building," in which the internal frame carried all the interior floor loads but the masonry exterior wall carried its own weight and provided lateral stability to the building. Recounting a report from engineers who examined the Home Insurance Building during its 1931 demolition, this supposed first skyscraper did not have a true skeleton frame because the exterior wall was not hung as a curtain wall and the frame did not address all of the forces acting on the building. In other words, Condit was wrong and therefore so are Wikipedia and other websites built upon his scholarship and that of other architectural historians.
Wall-braced cage buildings are one of five structural types that comprise the more than 400 late-19th-century tall buildings analyzed by Friedman. The others include: "Pure bearing-wall buildings," "Mixed bearing-wall buildings," "Frame-braced cage buildings," and "Skeleton-frame buildings," with "Wall-braced cage buildings" falling between the last two in an evolutionary order from traditional construction to the most modern technique that would eventually spawn considerably taller skyscrapers in the early 20th century. The different types of systems aid in understanding how engineers and contractors tackled tall buildings between 1871 and 1900, also revealing that newer technologies did not simply displace older ones; the bearing-wall Monadnock Building, after all, was completed six years after the Home Insurance Building. Simplifications of histories by Condit and others have become standard, but Friedman paints a much more complex picture.
The Structure of Skyscrapers in America, 1871–1900 is basically one book in two halves: eight chapters across 200 pages on the history, analysis, and preservation of skyscrapers in the years of the title; and a 225-page appendix that presents the 443 buildings of ten or more stories that comprised Friedman's research. The former is clearly written and abundantly illustrated, with archival images alongside new diagrams, such as those on the five types of structures; these make the book easy to follow regardless of its focus on technical matters. One chapter is devoted to preservation, which is clearly an extension of the work carried out by Friedman's firm and an indicator of why the book was published by the Association for Preservation Technology — where it can be purchased. The many extant buildings from the last three decades of the 19th century that require preservation, particularly in Chicago and New York, make understanding the nuances of their structural systems imperative.
The buildings collected in the appendix are documented consistently and in chronological order of completion, with stats indicated when known: name, address, date, architect, builder, types of structure, framing and walls, use, # floors, height, width, depth, slenderness ratio, costs, and sources. One image, typically a photograph, is provided for nearly all of the buildings, with each building given half a page. The appendix is an amazing resource, since it presents buildings often omitted from histories of architecture and does so in a straightforward manner. Unfortunately, the buildings in the appendix are not referenced in the preceding chapters when they are mentioned, which makes it hard to find certain buildings. One such example is the Gillender Building in New York City, which is illustrated on page 126 and stands out for its extreme slenderness ratio of 10.5. The photo caption does not include the completion date, so one has to flip to the "by location" index to find it under "New York, New York" and then see it is on page 359. Even if the date was known, the order of buildings within years is not apparent; it looks like buildings are grouped on spreads by location or other considerations rather a logical one like alphabetical order. A last quibble with the appendix is the lack of an extant/demolished designation; the Gillender Building, again, was built in 1897, but one needs to venture elsewhere, such as Nathan Silver's Lost New York, to see that it was demolished just thirteen years later. These are minor issues in a book that is an excellent resource for historians and preservationists interested in early skyscrapers.
DONALD FRIEDMAN BOOK TALK: