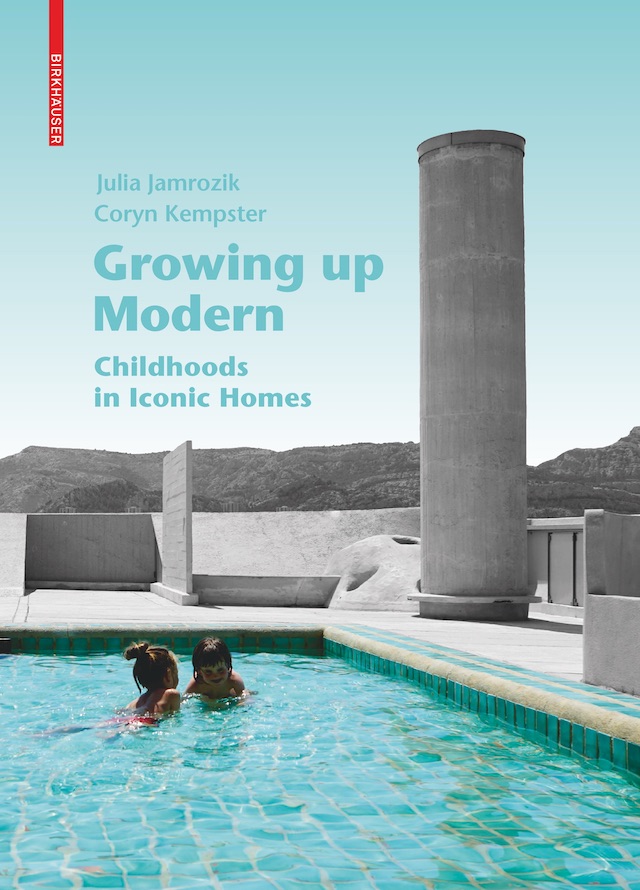 Growing Up Modern: Childhoods in Iconic Homes
by Julia Jamrozik and Coryn Kempster
Birkhäuser, May 2021

PUBLISHER'S DESCRIPTION:
What was it like to grow up in a Modernist residence? Did these radical environments shape the way that children looked at architecture later in life? The oral history in this book paint a uniquely intimate portrait of Modernism.
The authors conducted interviews with people, who spent their childhood in radical Modernist domestic spaces, uncovering both serene and poignant memories. The recollections range from the ambivalence of philosopher Ernst Tugendhat, now 90 years old, who lived in the famous Mies van der Rohe house in Brno (1930) to the fond reminiscing of the youngest daughter of the Schminke family, who still dreams of her Scharoun-designed ship-like villa in Löbau (1933). The book offers a unique, private and often refreshing perspective on these icons of the avant-garde.
Julia Jamrozik and Coryn Kempster are Canadian designers, artists and educators who have collaborated since 2003. Together, they endeavor to create spaces, objects and situations that interrupt the ordinary in critically engaging and playful ways.
REFERRAL LINKS:

dDAB COMMENTARY:
When Helga Zumpfe moved into an apartment in Bochum, Germany, one of the first things she did was remove all of the interior doors and replace them with curtains. Mrs. Zumpfe, née Schminke, wanted to make the apartment's rooms more interconnected, much like the famous house designed by Hans Scharoun that she lived in from the age of three until she was fifteen. In her conversation with architects Julia Jamrozik and Coryn Kempster, which took place in her Bochum apartment in 2015, Zumpfe recounted many things about the Schminke House, but none as special as the spaciousness of the 1933 house: "My memories of the house are of the light — light and joy."
The Schminke House was one of four residential projects — two villas (Mies's Tugendhat House and Scharoun's Schminke House), a row house (J.J.P. Oud's Weissenhof Estate Row House), and an apartment (Le Corbusier's Unité d'Habitation) — that Jamrozik and Kempster visited in 2015 to document them in their current state through their own photographs but also interview the children who grew up in them many decades ago. It is a simple yet extraordinary idea, one that falls into the "Why didn't I think of that?!" category. More than just an idea, though, Growing up Modern is the result of the couple's efforts to research, travel, and document the histories and present conditions of the houses, the second with their then nine-month-old son.
Each of the four case studies are presented in the book in a consistent format that moves from history to the present, from historical to personal. A quick architectural history by the authors is immediately followed by their conversation with the person who grew up in the home, each accompanied by archival photographs and other images. In lieu of straight transcriptions of the conversations, Jamrozik and Kempster insert quotes (highlighted as underlined text) into their text about the various spaces inside and outside each dwelling, an approach that strongly links the childhood recollections to the architecture. Next are floor plans keyed to the childhood moments — my favorite piece in the book — and last for each home are the contemporary photographs taken by the authors, whose captions further link the memories to the building.
Returning to the Schminke House (a house I have a fondness for, if anything, it being on the cover of my book 100 Years, 100 Buildings), the authors' conversation with Zumpfe is a highlight of the book, in part because she lived in the house long enough to develop significant memories. Furthermore, her mother took lots of photos of her and her siblings, and Scharoun, more than just the architect of the house, was a good friend of the clients and can be seen playing in the pool with Helga and the other kids. It's a treat to read a history of the house so unlike other architectural histories on it — on any modern house, for that matter.
Helga Schminke was born in 1930, meaning she will turn 91 this year. She is neither the youngest nor oldest former inhabitant of the four modern residential masterpieces appearing in the book, but her age makes me think Growing up Modern was made at just the right time: when her childhood memories were vivid and, to put it bluntly, before she died. Jamrozik and Kempster were actually inspired by stories of Roger Savoye's pneumonia supposedly being caused by the cold, leaky conditions of the villa designed by Le Corbusier. Roger died before they started on this book, but no matter as the other houses and histories they present are an impressive execution of an excellent idea.
INSIDE: