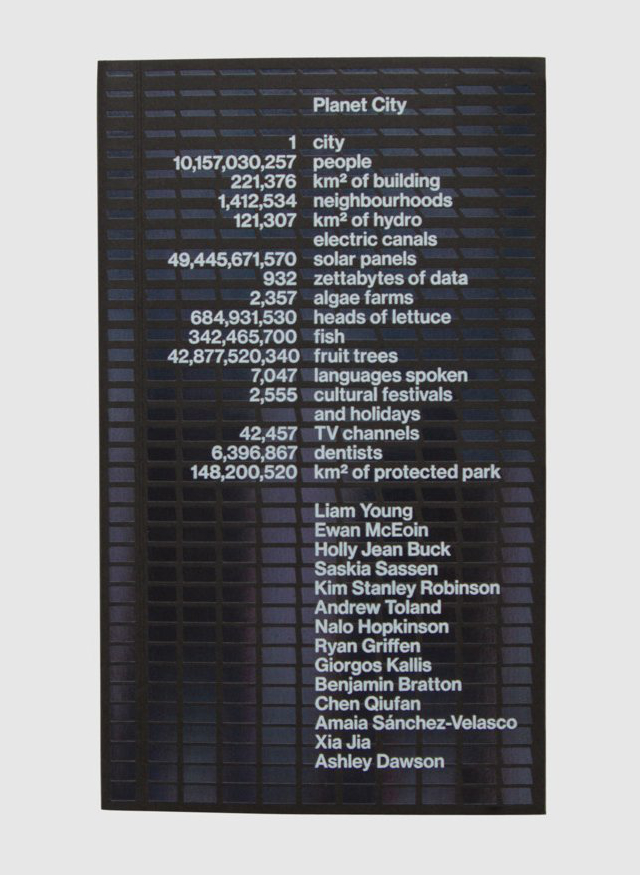 PUBLISHER'S DESCRIPTION:
Planet City is a project by Los Angeles-based film director and architect Liam Young, exploring the productive potential of extreme densification, in a speculative future where ten billion people surrender the rest of the planet to a global wilderness.
It imagines a radical reversal of planetary sprawl, where the world’s population retreats from our vast network of cities and entangled supply chains into one hyper-dense metropolis housing the entire population of the earth.
It is a vision of the future that runs counter to our current world, where humans dominate the planet. Where centuries of colonization, globalization and never-ending economic extraction and expansionism has remade the world from the scale of the cell to the tectonic plate.
Although wildly provocative, Planet City eschews the techno-utopian fantasy of designing a new world order. This is not a neocolonial masterplan to be imposed from a singular seat of power. It is a work of critical architecture – a speculative fiction grounded in statistical analysis, research and traditional knowledge. It is a collaborative work of multiple voices and cultures supported by an international team of acclaimed environmental scientists, theorists and advisors.
In Planet City we see that climate change is no longer a technological problem, but rather an ideological one, rooted in culture and politics. This is a fiction shaped like a city. Simultaneously an extraordinary image of tomorrow and an urgent examination of the environmental questions facing us today. ...
Liam Young is an Australian born film director and architect. Young’s work is situated within the fields of design fiction and critical design. His work explores the increasingly blurred boundaries among film, fiction, design and storytelling with the goal of prototyping and imagining the future of the city. Using speculative design, film and the visualization of imaginary cities, his work asks provocative questions about the roles of both architecture and entertainment.
Planet City can be purchased via Uro Publications or via Idea Books.
dDAB COMMENTARY:
Five years ago biologist Edmund O. Wilson published Half-Earth: Our Planet’s Fight for Life, a plea to set aside half of the earth's surface to nature as a means of protecting the planet's biodiversity. It's a simple, radical notion born from the myriad ways humans have spoiled much of the earth and will continue to do so without some dramatic reorientation of priorities. I have not read Wilson's book, but a positive review in the Guardian from April 2016 points out that "practical propositions in Half-Earth are as thin on the ground as spray toads in the Kihansi rainforest." So if Wilson was more interested in making the arguments for the Half-Earth idea, and then explaining how it would work toward saving species on the planet, then Liam Young's Planet City is one such proposal for taking the general idea and applying it to a hyper-dense metropolis many decades in the future.
More extreme than the 50/50 balance of Half-Earth, Young's Planet City speculates on all of humanity — 10 billion people, following from the scientific estimates for the year 2050 — living in one urban conglomeration: a massive retreat of humans from all over the planet to a single city, a migration that returns the rest of the planet to wilderness. The city of Planet City would have a density aligned with Manila but would be as large as an American state, as explained by the Australian-born, LA-based filmmaker when he presented the film as part of The World Around summit last year.
Images of cliff-like buildings bathed in pink/purple glow comprise much of the 15-minute film that was commissioned for the NGV Triennial 2020 as well as the book that is less a companion to the film than another piece of the larger Planet City project. Another component are the costumes that were designed with Ane Crabtree as masked, half-human, half-animal entities occupying fairly generic urban spaces (laundromats, rooftops) that the fictional city would have in abundance. The idea that humans are entwined with the rest of the earth's biological creatures is clear.
If the film — and I'm guessing here, as I've only seen snippets of it, as in the summit presentation above — is a continuous presentation of the fictional Planet City and its occupants, the book takes a different approach, inserting writings by Young and others between the glossy images taken from the film. The book, when seen on end, is striped, alternating roughly 20 pages of text for every 20 pages of visuals. Reading Planet City then is alternating between Young's filmic creation and the fiction, theories, and other ideas that informed his film and are very much an extension of it.
Young admits that the Planet City project is a collective project, in line with its ambitious proposal and the existential crises it is based on. As such, readers should gain as much insight into the premise from the texts by the contributors listed on the cover as from Young's film. With about half of the texts firmly planted in the world of fiction, the book is also a strong argument for the value of fiction (film included) in shaping the imagination and for readying people to deal with issues at the scale of the planet.
SPREADS: 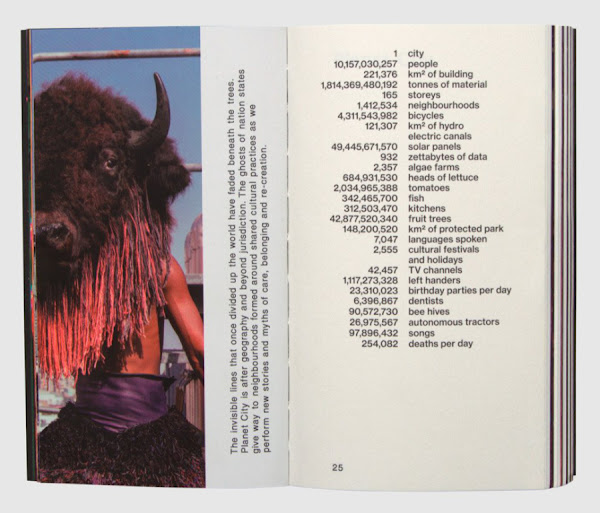 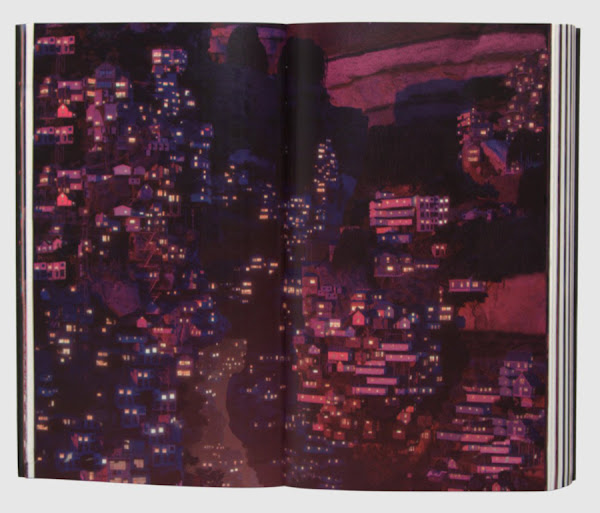 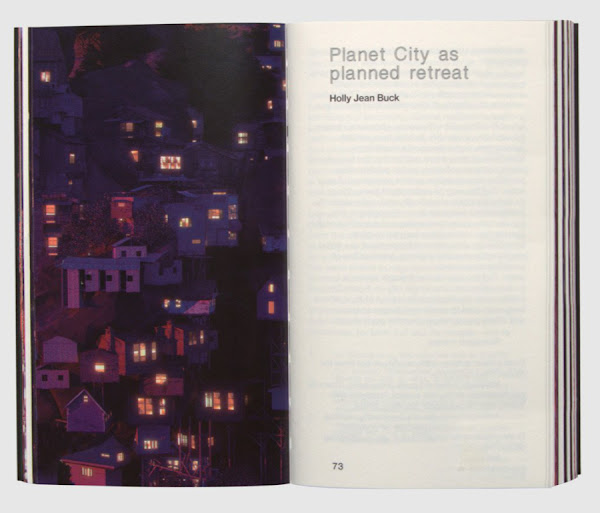 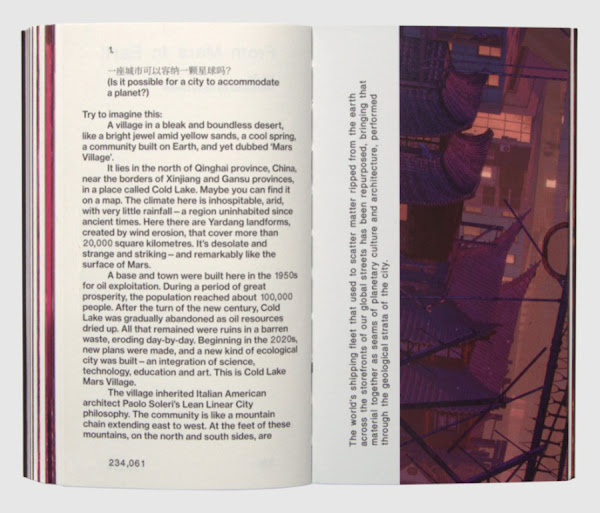