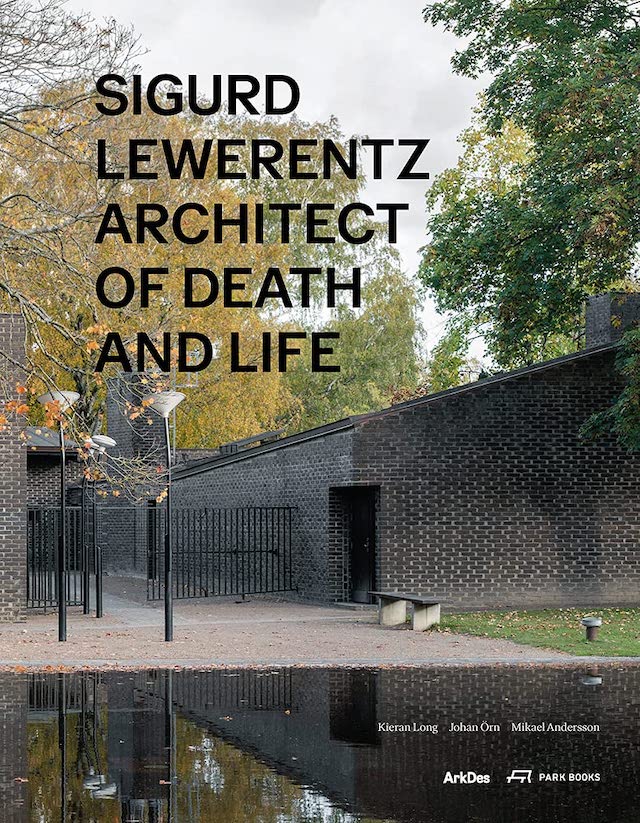 PUBLISHER'S DESCRIPTION:
Sigurd Lewerentz (1885–1975) is one of the most highly revered—as well as one of the most heavily mythologized—protagonists of modern European architecture. Arguably Sweden’s most distinguished modernist, he is more influential for architects around the world today than he was during his lifetime. Countless architecture lovers from around the world visit his buildings. Stockholm’s woodland cemetery Skogskyrkogården, his most significant contribution to landscape design, is a UNESCO World Heritage Site.
This authoritative new monograph on Sigurd Lewerentz is based on extensive research undertaken at ArkDes, Sweden’s national center for architecture and design, where his archive and personal library are kept. It features a wealth of drawings and sketches, designs for furniture and interiors, model photographs, and more from his estate, most of which are published here for the first time, alongside new photographs of his realized buildings. Essays by leading experts explore Lewerentz’s life and work, his legacy, and lasting significance from a contemporary perspective.
This substantial, beautifully designed book offers the most comprehensive survey to date of Lewerentz’s achievements in all fields of his multifaceted work.
Kieran Long is the director of ArkDes, Sweden’s national center for architecture and design in Stockholm. Johan Örn is the curator of collections at ArkDes in Stockholm, where he is in charge of Sigurd Lewerentz’s estate.
REFERRAL LINKS:

dDAB COMMENTARY:
A photograph of St. Peter's Church (1966) in Klippan, Sweden, wraps the dust jacket of Sigurd Lewerentz: Architect of Death and Life, the impressive new monograph that accompanies the exhibition of the same name opening at ArkDes on October 1, 2021. The choice is fitting, as it is one of the Swedish architect's most famous projects, alongside St. Mark's Church (1960) in Stockholm and the cemeteries in Malmö (Eastern, 1916–1971) and Stockholm (Woodland, 1915–1961). Opening the book, the reader is confronted immediately with three more images: a photograph of Lewerentz in his attic studio in Skanör, probably in the early 1960s; a colorful watercolor of a floating dance floor designed for the Stockholm Exhibition in 1930; and the Flower Kiosk at Eastern Cemetery, completed in 1969, not long before Lewerentz's death in 1975 and therefore one of his last completed buildings. This trio of images seems to be saying that although, in the decades after his death, Lewerentz became known internationally for the two churches and two cemeteries, his work on the Expo and other commercial ventures is just as important. The rest of the book, in its text and selection of images, expresses this as much.
At $150, Architect of Death and Life is expensive, but its contents can be seen like three books in one book — one large book. Part one starts with an introduction by ArkDes director Kieran Long, who states that the four years of research on the book and exhibition show "that Lewerentz was much more than the author of idiosyncratic churches and cemeteries." Much of his text describes how ArkDes's book and exhibition counter the prevailing focus on those projects in publications between Lewerentz's death and the present day. Following the introduction is a biography on Lewerentz by Johan Örn that spans nearly 200 pages and has 453 footnotes, all primary sources, much of them in the archives of ArkDes. Part two consists of 80 pages of color photographs of Lewerentz's buildings taken by Johan Dehlin in the summer of 2020. Part three, the largest, is the archive: more than 350 pages of drawings, models, photographs and other documents that came out of Lewerentz's studio and are now held at ArkDes — some of the 13,650 items in the archive selected and compiled by Örn with Mikael Andersson. The appendix includes a timeline spanning Lewerentz's life, from 1885 to 1975, three pages of references, and a far-too-short index that is just over one page.
Architect of Death and Life is like three books in one because of size but also because the three parts do not really "talk" to each other. Neither part references the other two parts, so it takes some effort by the reader to find a particular project elsewhere in the book when encountering it in words or images, a feat of navigation not aided by the index that only includes people, not places or buildings. My approach to the book was to read the biography in part one, flipping to the images in the other two parts when I wanted to see more than the few archival images accompanying Örn's excellent text. Unfortunately, there is no clear chronological or geographical order to the photographs (they start with "Villa Edstrand, Falsterbo, 1937," and end with "Chapel, Forsbacka, 1919"), but they are large, primarily full-bleed, and are grouped by project, such that Lewerentz's numerous buildings at Eastern Cemetery follow one after another; it doesn't take long, in other words, to get a handle on part two. Thankfully the archive, like the bio, is in chronological order, making it easy to find drawings, for example, of projects learned about in part one, such as the National Insurance Board (Stockholm, 1932), Villa Edstrand, and Malmö City Theatre (1944), just a few of the highlights.
Although reading the biography involved a good deal of back and forth to gain a greater visual understanding of Lewerentz's buildings, in the end I felt like the effort aided my overall understanding of his career. Even Örn occasionally alerts readers that the project-specific texts within his biography belie the diversity of Lewerentz's studio. He writes of the studio in the 1930s: "the architects in Lewerentz's studio might be asked to work on an illuminated sign one day, and the design for a tomb the next." The latter obviously refers to some of the most lasting projects in his oeuvre, while the projects falling into the former (retail, expos, etc.) no longer exist, a fact that made others forget about them, even in Lewerentz's lifetime. Architect of Death and Life is a beautiful book on Sigurd Lewerentz, one that admirably and capably paints a comprehensive portrait of a career more diverse than many people realized, myself included.
SPREADS: 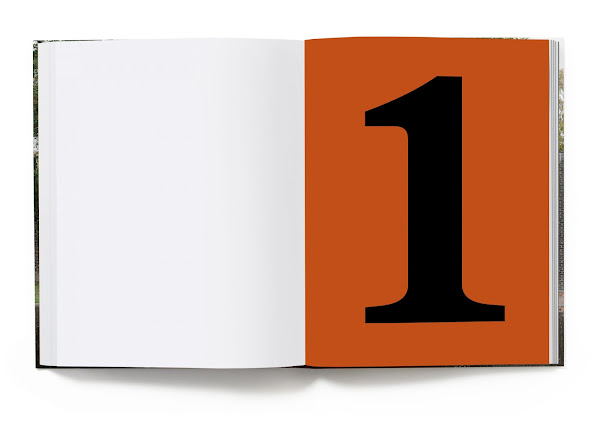 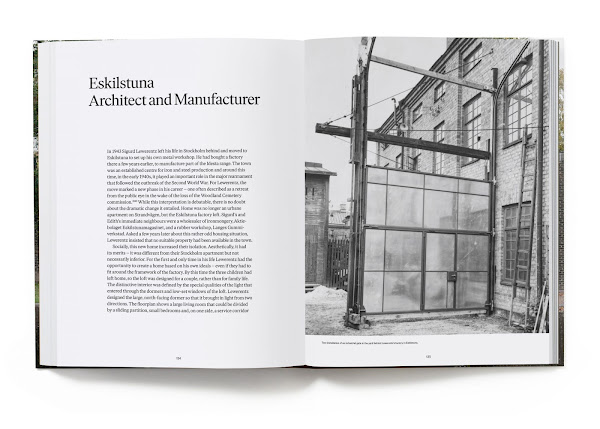 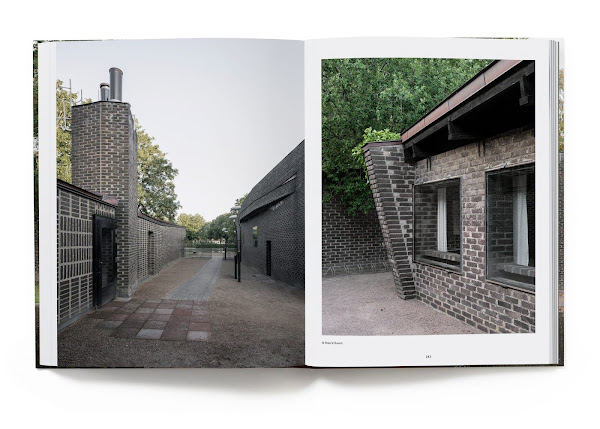 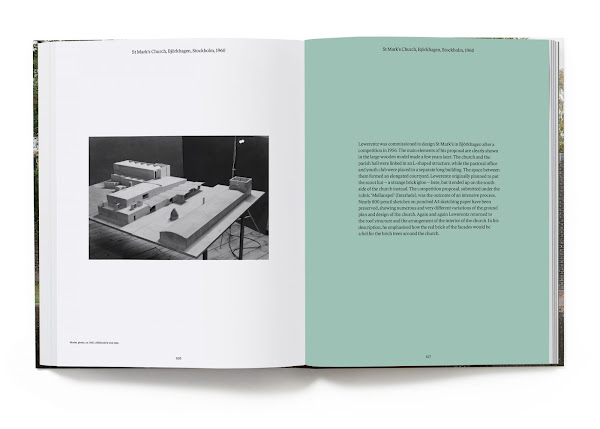 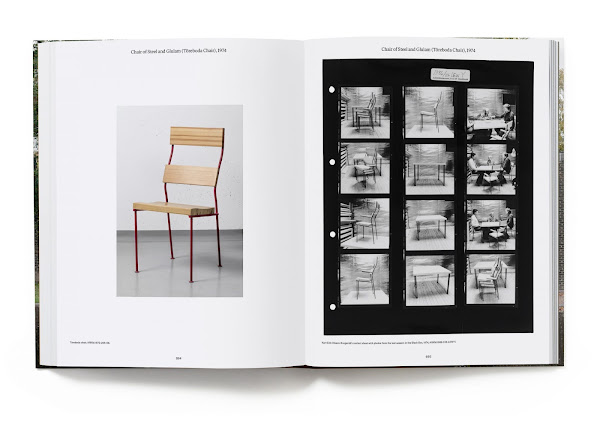