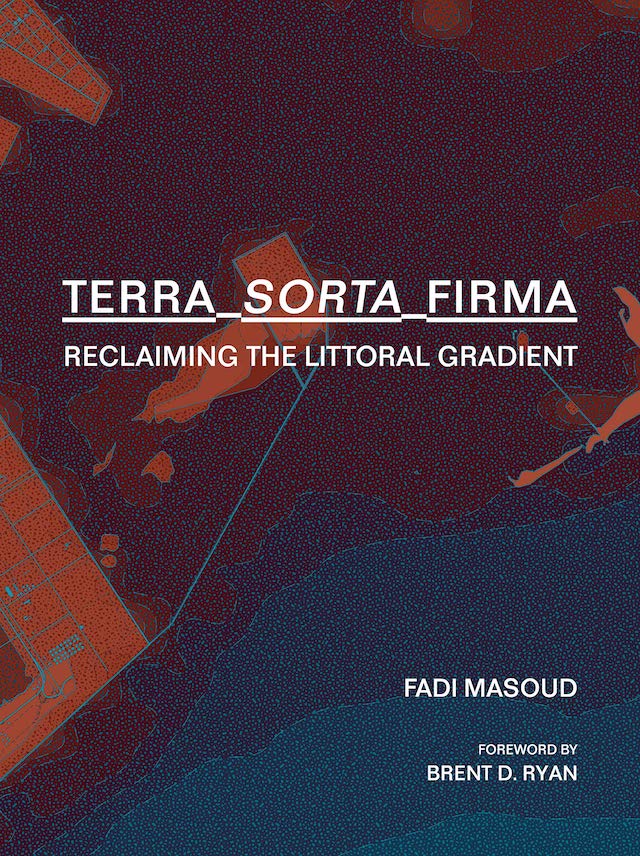 PUBLISHER'S DESCRIPTION:
For centuries, cities have grown and expanded onto previously saturated grounds;”reclaiming” land from estuaries, marshes, mangroves, and seabeds. While these artificial coastlines are sites of tremendous real estate, civic, and infrastructural investments, they are also the most vulnerable to the effects of climate change.
Terra-Sorta-Firma documents the global extent of reclaimed coastal lands, and provides a framework for comparison across varying geographies, cultures, and histories. It renders visible the ubiquity and precarity of urban coastal reclamation in an age of increased environmental and economic indeterminacy. The five parts of the book question urbanism’s political, economic, and physical binary relationship to wet and dry grounds in search of a new understanding of land in a state of permanent flux.
This book challenges designers, developers, policymakers, engineers, and urbanists to reconsider the design and construction of land itself, and to re-imagine this most fundamental of all infrastructures along a gradient of inundation.
Fadi Masoud, Assistant Professor of Landscape Architecture and Urbanism at the University of Toronto. His research, teaching, and design work focuses on establishing relationships between dynamic large-scale environmental systems, landscape design, and the instrumentality of planning tools.
REFERRAL LINKS:

dDAB COMMENTARY:
I am a sucker for maps. I can spend hours poring over an atlas or some other type of book that has a plethora of maps. Heck, I almost bought a wine atlas I came across at my local thrift store the other day because it had thorough, beautifully done maps of wine regions all over the world (if it were an atlas of beer instead of wine I would have walked out with it). Terra-Sorta-Firma fits that ilk, particularly the three "Atlases" from its four sections that fill around 200 of its 324 pages.
Most of the maps depict urban districts on reclaimed land: dozens of waterfront districts that illustrate "the progression of each site," as the introduction to one of the atlases says, "[tracing] it back from its current condition to its original hydrological state (pre-infill)." Simply put, the maps show how humanity has extended cities into the sea over time, filling in previously watery domains for living, industry, recreation, infrastructure, or other uses. With one city or district per spread, as in the last one illustrated below, the maps use consistent colors and graphics, if divergent scales, to illustrate the ceaseless expansion of cities via infill.
The book was produced by students at the University of Toronto and MIT, who were taught by Fadi Masoud with Alan Berger. The latter's involvement makes a lot of sense, at least in terms of the courses and workshops yielding a book of maps: Berger is the author of, among other things, Drosscape: Wasting Land in Urban America, which can be described as an atlas of industrial dross depicted via aerial photographs in concert with maps, graphs, and charts. Masoud similarly hones in on areas not often addressed by architects and the like. While we all remember the Palm Islands of the Dubai Watefront or the high-profile Borneo Sporenburg in Amsterdam, there are dozens more waterfronts whose reshaping goes unnoticed by most.
Given that the book comes out of academia it also includes contributions that give greater historical and contemporary context to the book's theme. Part four, "Reclaiming the Littoral Gradient," has six such contributions, most focusing on specific places, as in Kian Goh's essay on the "Trans-Territorial Ecologies in Singapore." Additionally, the first part of the book, "Sand Narratives" (first three spreads), is extremely helpful in providing contextual information on how waterfronts are technically filled. Lastly, the academic nature of the book — i.e., the many hands in the kitchen — means there is the occasional error (e.g., maps missing scales), but their number is much fewer than other books I've seen coming out of architecture studios. This book is recommended for fellow "cartophiles" and for designers and engineers focused on urban waterfronts, those settings that are increasingly threatened as climate change accelerates.
SPREADS: 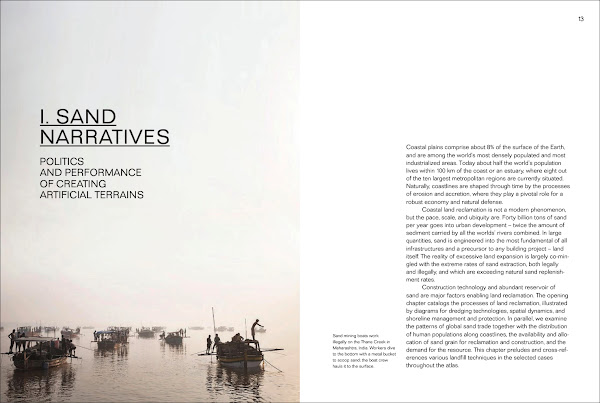 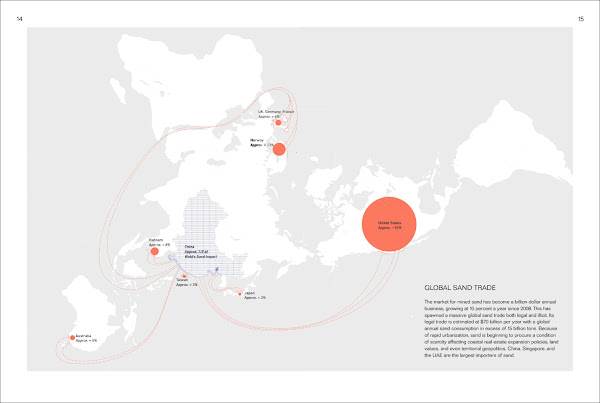 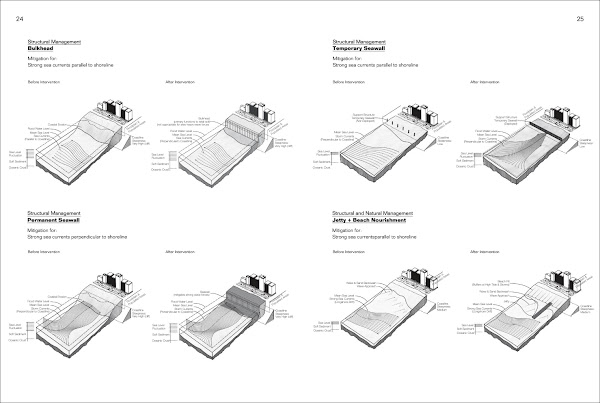 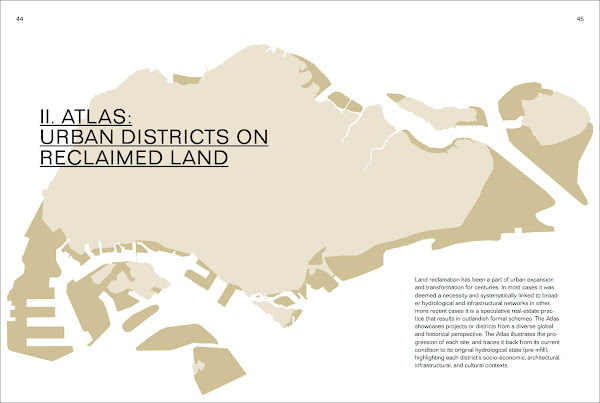 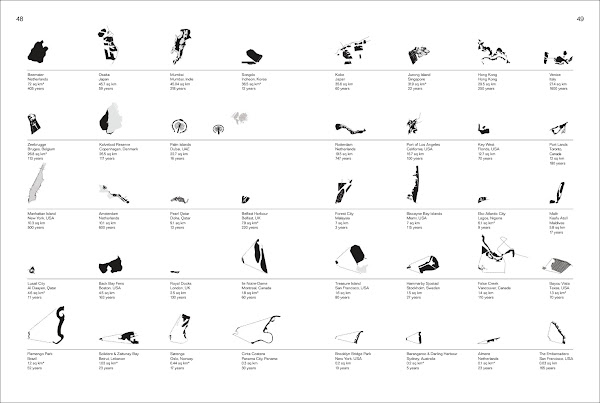 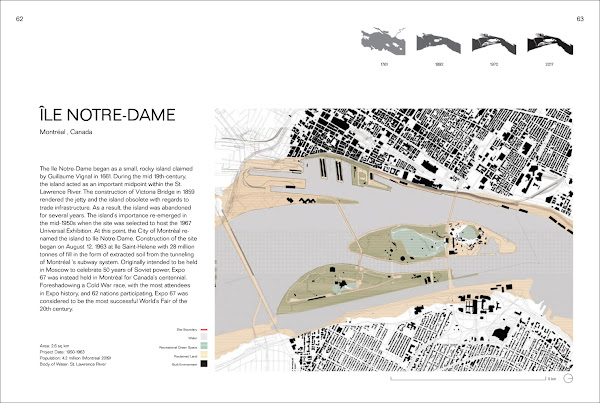