A City Is Not a Computer 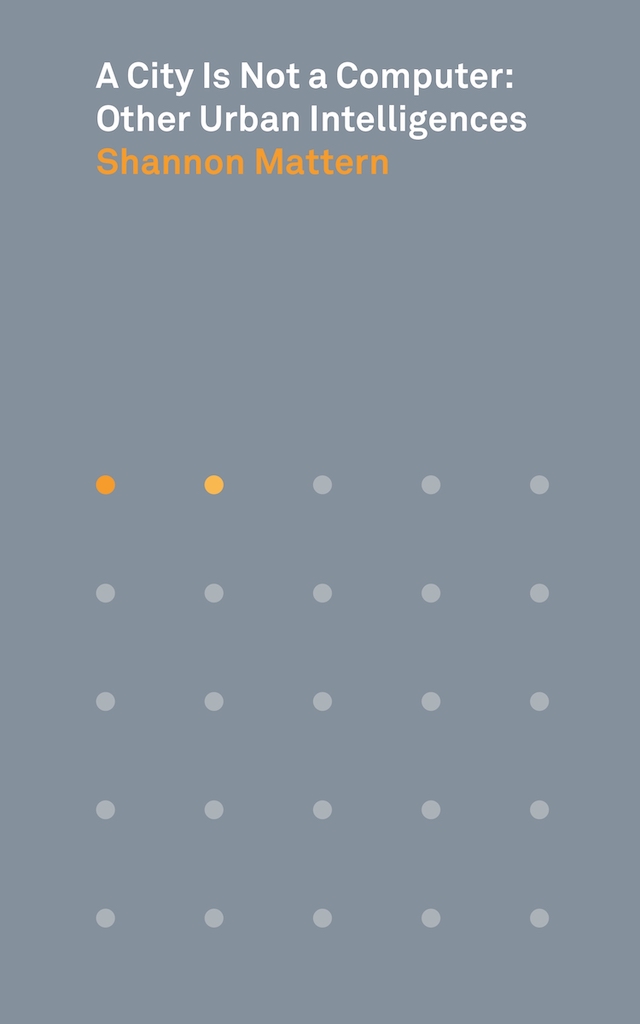 A City Is Not a Computer: Other Urban Intelligences
by Shannon Mattern
Princeton University Press, August 2021

PUBLISHER'S DESCRIPTION:
Computational models of urbanism—smart cities that use data-driven planning and algorithmic administration—promise to deliver new urban efficiencies and conveniences. Yet these models limit our understanding of what we can know about a city. A City Is Not a Computer reveals how cities encompass myriad forms of local and indigenous intelligences and knowledge institutions, arguing that these resources are a vital supplement and corrective to increasingly prevalent algorithmic models.
Shannon Mattern begins by examining the ethical and ontological implications of urban technologies and computational models, discussing how they shape and in many cases profoundly limit our engagement with cities. She looks at the methods and underlying assumptions of data-driven urbanism, and demonstrates how the “city-as-computer” metaphor, which undergirds much of today’s urban policy and design, reduces place-based knowledge to information processing. Mattern then imagines how we might sustain institutions and infrastructures that constitute more diverse, open, inclusive urban forms. She shows how the public library functions as a steward of urban intelligence, and describes the scales of upkeep needed to sustain a city’s many moving parts, from spinning hard drives to bridge repairs.
Shannon Mattern is professor of anthropology at the New School for Social Research. Her books include Code and Clay, Data and Dirt: Five Thousand Years of Urban Media and The New Downtown Library: Designing with Communities.
REFERRAL LINKS:

dDAB COMMENTARY:
A City Is Not a Computer is the second installment in the Places Books series, so named for Places Journal, the once-printed, now-online journal that bills itself as "an essential and trusted resource on the future of architecture, landscape, and urbanism." It follows Despina Stratigakos's Where Are the Women Architects?, which came out in 2016. (I hope five years between books in the series isn't the norm, or it will take another 115 years to fill in the rest of the dots of the grid on the cover!) Regular readers of Places Journal will be familiar with Mattern, a professor of anthropology at the New School and a contributing writer for Places, focusing on the intersecting issues of cities, data, infrastructure, and libraries. In fact, people reading her essays on Places should know the contents of A City Is Not a Computer, as its four chapters and conclusion are tweaks of a handful of such pieces (if not more) published on the website between 2014 to 2018.
Before the first chapter, Mattern's introduction spells out the reference of the book's title, one that is familiar but might also be on the tip of some reader's tongues: Christopher Alexander's assertion, back in 1965, that "a city is not a tree." Metaphors are prevalent in urbanism, and at the time seeing the city as a tree, with its trunk and branches, resulted in, among other things, street layouts that were tree-like, with arterial roads and feeder roads. But the movement of people and goods in cities and suburbs is not the same as nutrients in a tree; if anything, it's the opposite: tree-like transit networks lead to traffic jams and mono-functional subdivisions, and it contributes greatly to global warming through a reliance on cars for even basic daily tasks. The tree metaphor, as Mattern points out, extends to computers, with data "commonly organized in hierarchical tree structures" with various nodes. But just as Alexander found that "tree" thinking was "trading the humanity and richness of the living city for a conceptual simplicity" that doesn't benefit people, Mattern's book critiques the "smart city" movement that also serves to simplify views of the the city and benefit investors rather than residents.
The four chapters of the book are, in order and linked to original Places essays they're based on: "City Console," a fascinating account of urban dashboards, which have been in place much longer than I realized; "A City Is Not a Computer," the heart of the book and its call for recognizing urban intelligences beyond computing; "Public Knowledge," on the value of public libraries as knowledge, social, and ontological infrastructures; and "Maintenance Codes," on the messy reality that everything "smart" in a city is made out of stuff — stuff that needs to be cleaned and repaired. The conclusion looks at "Platforms, Grafts and Arboreal Intelligence" in the context of Hudson Yards, the high-profile development that is overlaid with a number of smart-city features that are — no surprise — hidden from view and public oversight. It's also no surprise that Sidewalk Labs, the company behind the controversial, aborted Sidewalk Toronto project, which was meant to be a test of many smart-city technologies, is headquartered in 10 Hudson Yards.
Which brings us to one obvious question about this book: why buy it, if earlier versions of its contents can be read online for free? Setting aside my own bias for books over bytes, for words on the page over pixels on a screen, the lag between the online publication of the peer-reviewed articles and their reworking in book form as published by Princeton University Press afforded Mattern time to address the pandemic and social movements of 2020. Many writers have attempted to cater their ongoing research to these generation-defining events, but no subjects seem so relevant — if not immediately so — than those tackled by Mattern. For bridging the various areas of her focus as mentioned above are equality: equal access to information, removing the biases from data and how data is used, and giving a diversity of voices input into what shapes their cities take, to name but a few. Furthermore, the transformation of Mattern's Places essays into A City Is Not a Computer benefits from the narrative formed by the four reworked chapters, making the the book hard to put down. If you're like me, you might just find yourself reading it while walking around: getting "smart" in the city!
Email Post
Labels: history-theory thursday princeton university press