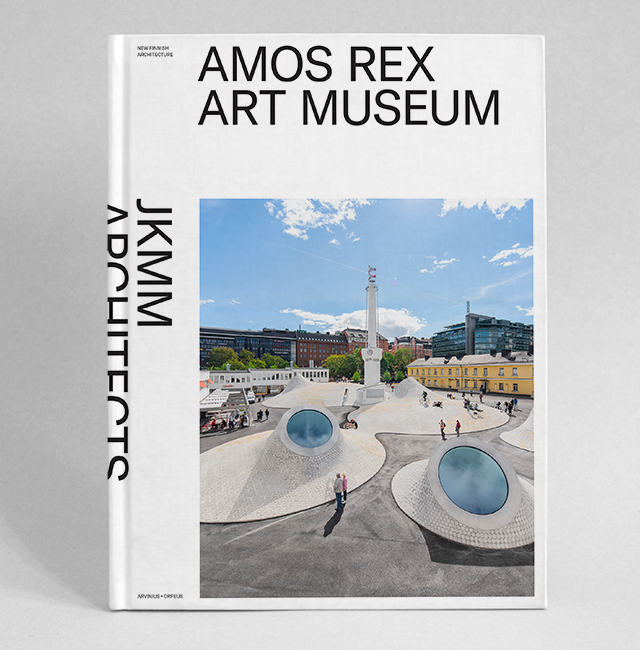 PUBLISHER'S DESCRIPTION:
Since its opening, the Amos Rex Art Museum, designed by JKMM architects, has been a great public and architectural success. It is tucked away underground in the ancient glass palace in the heart of central Helsinki.
Through its architecture, it has set new boundaries for what a museum can and should be. With its huge arched exhibition halls and eye-catching lanterns that make it feel as though it is above ground, the building never fails to surprise.
Art museums seldom manage to be fully functional for all types of art, new and old, and at the same time deliver an architecturally strong experience that changes the city. But here, everything is in place, states Lars Nittve in one of the book’s essays. In this book, a close-up of the museum is drawn in words, sketches, and pictures.
REFERRAL LINKS:

dDAB COMMENTARY:
I'm a big fan of underground buildings. I think landscrapers — or groundscapers, or whatever one wants to call predominantly underground buildings — are an under-appreciated typology. More accurate than typology, building below grade is a commendable design approach in regard to dealing with the landscape: scraping the land, if you will, rather than stacking above it. The reasons for my appreciation are intuitive, but if I start to think about it, it's also because there are so few examples of buildings merging with the land; because there is something anti-commodifying about minimizing the area of a building by digging down, when compared to multiplying the site area through tall buildings; and because the land above subterranean spaces in such projects is often "given back" to the surrounding community in the form of parks and other green spaces.
These sentiments clearly apply to Amos Rex, the private art museum in Helsinki designed by JKMM Architects for Föreningen Konstsamfundet ("The Art Foundation Association"), the Finnish cultural association that was founded in 1940 by the late businessman and newspaper editor Amos Anderson, for whom the museum is named. The design by JKMM locates galleries for the museum beneath the existing Lasipalatsi Square; the galleries appear to erupt into the square in a topography of mounds and skylights, plus a mast housing an exit stair serving the galleries below. Also existing is the 1930s Lasipalatsi building, or "Glass Palace," which was restored and renovated as part of the project, now serves as the main entrance for Amox Rex, and has a gift shop and other spaces beneath the preserved Bio Rex cinema.
This new book on Amos Rex — the first in the "New Nordic Architecture" series from Arvinius + Orfeus — reinforces the special nature of the subterranean cultural project. Through words and images, the book captures the experience of the place: on the plaza, in the galleries below the plaza, and in the Glass Palace. Photographs are the main means of conveying the qualities of the setting, while the words describe how such an audacious design got built in the first place. The latter is found in the middle of the book — between spreads with exterior photographs and those inside the museum — in an interview between Amos Rex director Kai Kartio and architect Asmo Jaaksi, the "J" in JKMM. Before Amos Rex in Lasipalatsi Square was the Amos Anderson Art Museum in the house Amos Anderson built for himself in the early 1900s. Kartio describes the move to Lasipalatsi in the interview, when he came to the City of Helsinki proposing a building under the plaza and was surprised at their receptiveness.
Ultimately, both client and architect found building underground to be the ideal means of respecting the historic Glass Palace, which would have been an awkward fit for an art museum and might have been ruined by an above-ground extension. The floor plans in the book show a large underground gallery substantially larger than the narrow footprints of the landmark buildings overlooking the plaza. Photos depict those galleries with undulating ceilings covered in discs (8,600 to be precise, per editor Tomas Lauri's essay at the back of the book), punctuated by the skylights that project into the plaza. Amos Rex and Lasipalatsi Square are united in this undulating surface, which caps displays of art underground and activates public life at street level.
SPREADS: 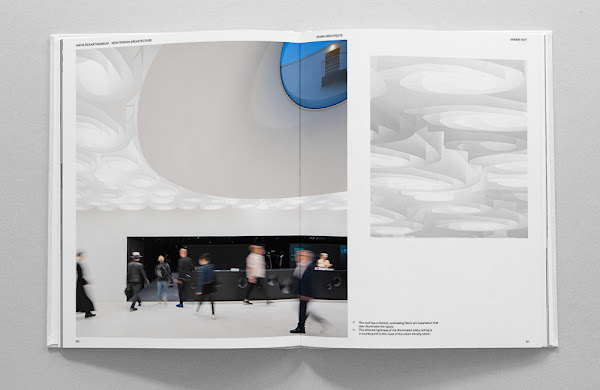 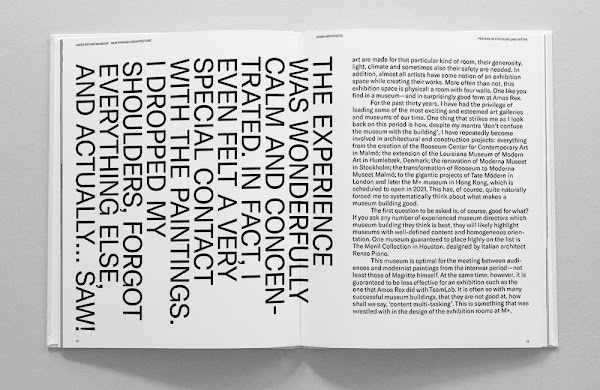 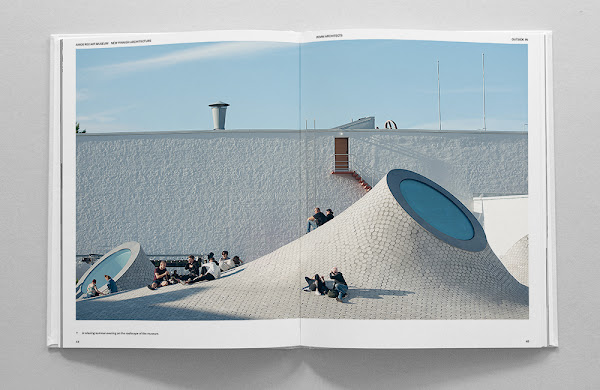 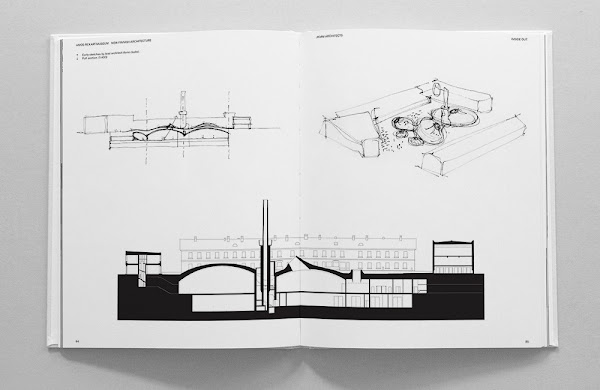