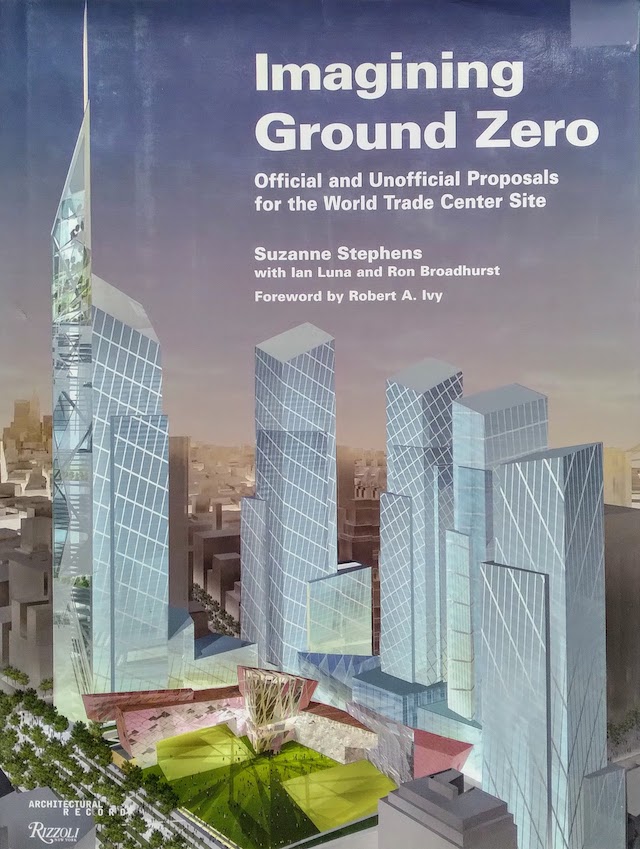 FROM THE FLAPS:
The most important building competition in the world today, and the most important one since the international design competition for the Chicago Tribune Tower in 1922, is for the reconstruction of the World Trade Center in lower Manhattan. It has inspired a multitude of designs and has engaged architects on a global scale in the re-imagining of the twin towers' vacant sixteen-acre site.
Published in conjunction with Architectural Record, the preeminent architecture journal in the United States, Imagining Ground Zero: Official and Unofficial Proposals for the World Trade Center Site documents not only the master plan competition, won by Studio Daniel Libeskind and sponsored by the Lower Manhattan Development Corporation, but also proposals submitted by invitation  of and published by New York magazine, proposals from the exhibition at Max Protetch Gallery, as well as a selection from the more than 5,000 schemes submitted to the World Trade Center Memorial. The remarkable and authoritative survey features in depth the official scheme for the site, designed by David Childs of Skidmore, Owings & Merrill with the collaboration of Daniel Libeskind of Studio Daniel Libeskind; Reflecting Absence, the winning scheme for the memorial, designed by Michael Arad and Peter Walker; and, as well, the World Trade Center Transportation Hub, designed by Santiago Calatrava, DMJM + Harris, and STV Group.
With its exhaustive approach to these myriad voices in the discourse surrounding the World Trade Center site, Imagining Ground Zero is destined to become the canonical reference for this unprecedented event in world architecture.
Suzanne Stephens, who has a Ph.D. in the History of Architecture and Urban Development from Cornell University, is Special Correspondent for Architectural Record. Ian Luna is an architectural writer who edited Rizzoli's third volume on Kohn Pedersen Fox and Rizzoli's recent New New York: Architecture of a City. Ron Broadhurst is an architectural writer and editor.
REFERRAL LINKS:

dDAB COMMENTARY:
Today is the 20th anniversary of the 9/11 attacks. With the anniversary this year falling on a Saturday, it seemed already determined that this "wayback weekend" post would be on the World Trade Center. But which book? Which of the dozen books in my library on the Twin Towers and post-9/11 rebuilding would suitably mark this occasion? With news stories leading up to today echoing that, with twenty years transpiring, many people are forgetting what it felt like on that Tuesday morning and the days after — heck, there are adults now that were even born after September 11, 2001! — I couldn't help think if the same applies to rebuilding: that people have forgotten how architecture was thrown into the spotlight after 9/11. There were some optimistic months and years when architects generated ideas and competed to realize them, before politics, money, real estate, and other interrelated powers turned the WTC site into what Michael Kimmelman summed up well recently as "a mess and [...] a massive, missed opportunity."
If architects and other people have forgotten how architects responded to 9/11, Imagining Ground Zero is the best collection of their ideas and images on rebuilding — warts and all — between September 11, 2001, and the book's publication three years later. As the subtitle of the book makes clear, the designs assembled by Suzanne Stephens and other editors from Architectural Record include both official and unofficial designs for the WTC site. The former is highlighted by the "Innovative Design Study" that was spurred by the mediocre reception to master plans by Beyer Blinder Belle unveiled in July 2002. The designs by Studio Libeskind, which won the master plan competition, the THINK team, which actually published a "Ground Zero Diary" on their second-place design, and the other finalists are in these pages; now, like then, I think the designs come across as insular, out of touch with the larger public's attitudes toward rebuilding and views on the "sacred" site. Ironically, the "innovative design study" that was selected by Governor Pataki and the LMDC led to a "final" result whose built form strongly echoes one of BBB's master plan concepts, in which six towers, including one that looks a lot like One World Trade Center, abuts the memorial and its Twin Towers' footprints.
Other official proposals in the book include the evolution of 1 WTC, then called Freedom Tower, a forced marriage between Libeskind and David Childs of SOM; the WTC Trasnsportation Hub, designed by Santiago Calatrava and one of the few elements of the site to get excited about at the time; and some entries from the 9/11 Memorial competition. (Both 1 WTC and the memorial competition got book-length treatments.) The unofficial proposals include designs by some big-name architects for a September 2002 issue of the New York Times Magazine, curated by the paper's architecture critic Herbert Muschamp, and an issue of New York magazine the same month, organized by Joseph Giovannini; many of the proposals in both issues looked at the larger context of Lower Manhattan, not just the WTC site. There are also designs for an early exhibition (at the time it seemed too early) of architectural ideas at Max Protetch Gallery, which were also given their own book, and "independent submissions" for rebuilding and memorializing that were developed outside of the official and unofficial settings documented elsewhere in the book. All these years later, Imagining Ground Zero is a valuable snapshot of the early days of a still-ongoing process of rebuilding, and a revealing look at architects grappling with ways design can be used to remember.
SPREADS: 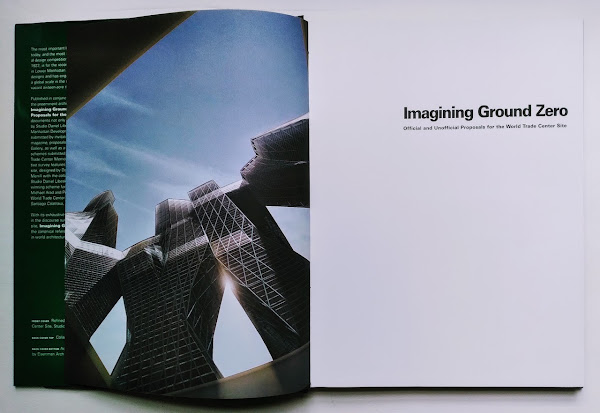 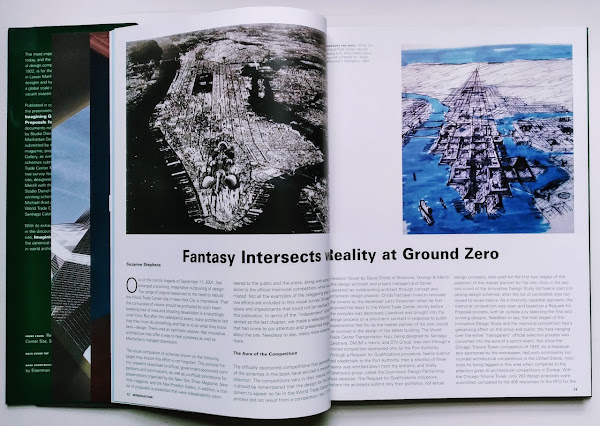 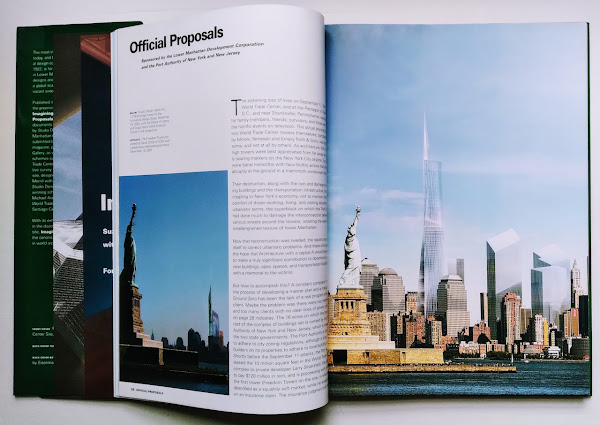 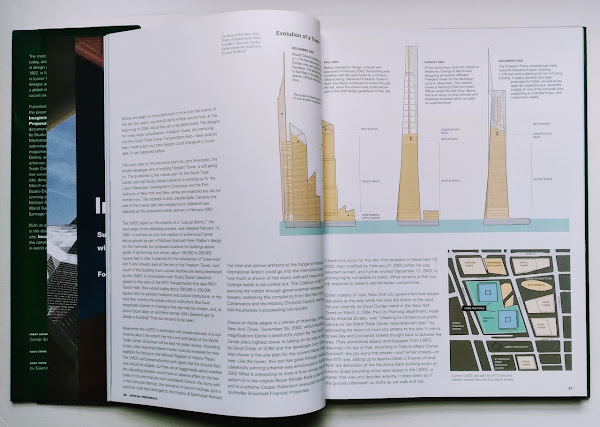 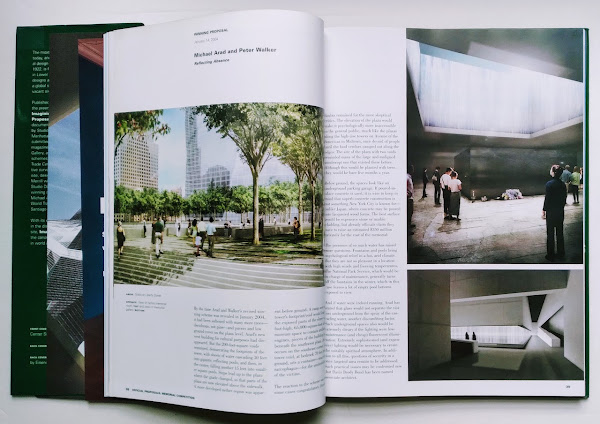 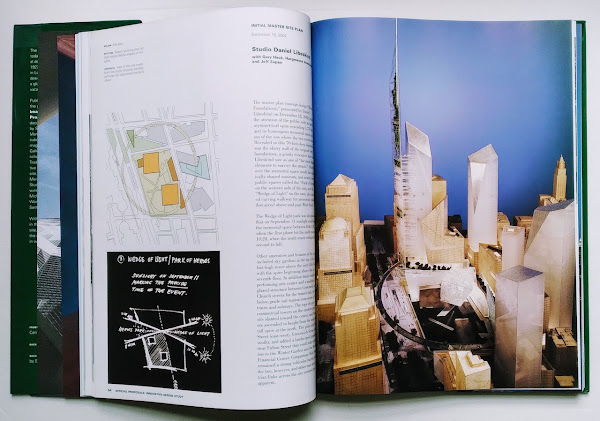 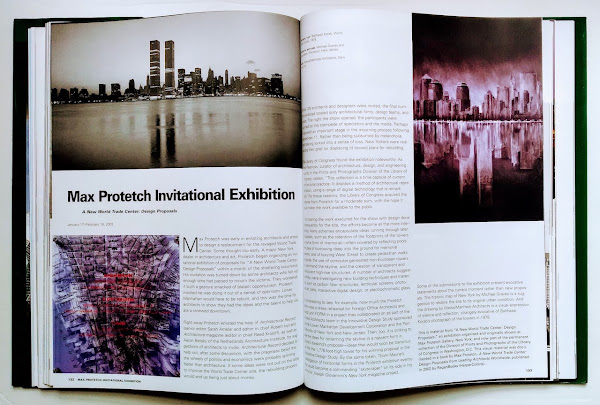 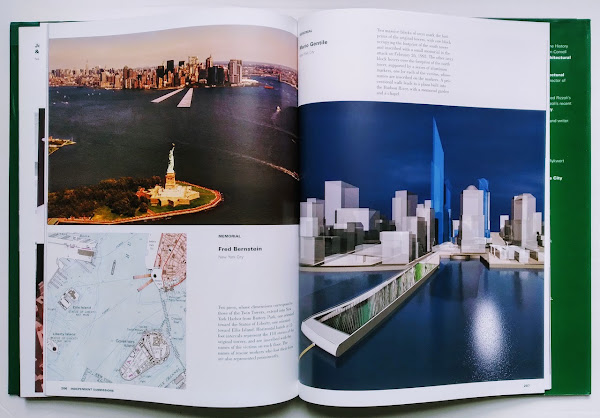