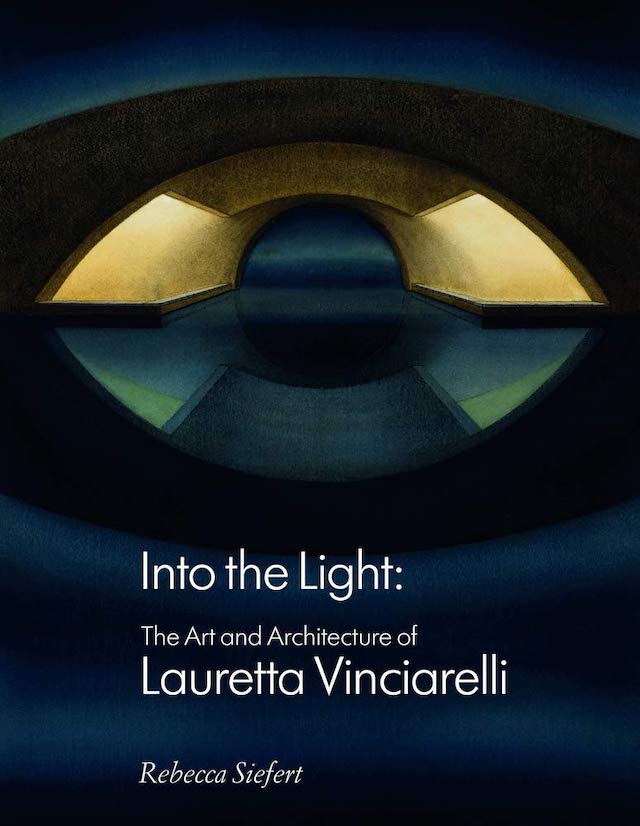 Into the Light: The Art and Architecture of Lauretta Vinciarelli
by Rebecca Siefert
Lund Humphries, February 2021

PUBLISHER'S DESCRIPTION:
Into the Light: The Art and Architecture of Lauretta Vinciarelli centres on the interdisciplinary work of Lauretta Vinciarelli (1943-2011), a key yet relatively unknown figure who inhabited a world of 'firsts': she was the first woman to have drawings acquired by the Department of Architecture and Design at the Museum of Modern Art (in 1974); she was among the first women hired to teach architecture studio courses at Columbia University (in 1978); and she was the first and only woman granted a solo exhibition at Peter Eisenman’s influential Institute of Architecture and Urban Studies in New York (also 1978). Raised in northern Italy and educated at La Sapienza University in Rome during the tumultuous 1960s, Vinciarelli would bring her socio-political consciousness to bear on her work in New York, where she relocated in 1969. By 1976, she and Minimalist artist Donald Judd had become a romantic and professional pair, collaborating for nearly ten years on architecture, furniture design, and printmaking. Her influence on Judd’s work and her historical place in the story of contemporary architecture has been overlooked by art historians, however, and her legacy today resides with the luminous watercolor paintings she created from the 1980s until the end of her life.
This book presents the first comprehensive study of Vinciarelli’s work in art and architecture, offering a unique lens through which to reassess the revival of architectural drawing in the late 1970s as connected to larger theoretical, pedagogical, and political aims to shed new light on this electrifying period. More than simply a book of reclamation, Into the Light argues that Vinciarelli is an overlooked missing link in the exchange between Italy and the United States at a pivotal point in contemporary architecture, in the architectural drawings revival of the 1970s as connected to the socio-political context of Italy, and in the historiography of Minimalism. It consequently offers a wholly new appraisal of not only Vinciarelli’s career, but of the art and architectural scene in New York during this period; of the revival of architectural drawing; of the slow inclusion of women into the architectural academy; and of creative collaborations between couples.
Rebecca Siefert is an Assistant Professor of Art history at Governors State University. She holds a PhD from the City University of New York, USA.
REFERRAL LINKS:

dDAB COMMENTARY:
I've been a fan of Lauretta Vinciarelli's watercolors since 1995, when one was featured on the cover of the 17th issue of Oz Journal at Kansas State University, my alma mater. An exhibition at Harvard GSD happened a few years later, accompanied by a book, Not Architecture But Evidence That It Exists, that similarly hones in on Vinciarelli's evocative watercolors of submerged spaces viewed in one-point perspective. It was not until reading Clear Light: The Architecture of Lauretta Vinciarelli, a comprehensive monograph published after a posthumous exhibition at City College of New York (another alma mater), that I got a better sense of the architect, educator, and artist's wider career.
In my review of Clear Light earlier this year, I mentioned Rebecca Siefert's Into the Light: The Art and Architecture of Lauretta Vinciarelli, which I hadn't seen at the time, as a "more intellectual and interdisciplinary look at the Italian-American architect." By virtue of it being a reworking of Siefert's 2018 Ph.D. dissertation at CUNY's Graduate Center, Into the Light is clearly intellectual: exhaustively researched and comprehensively presenting Vinciarelli's career from 1970 to her death in 2011, the book is also highly readable and is particularly commendable for the way it illuminates Vinciarelli's output beyond the watercolors she is known for.
Siefert presents Vinciarelli's life in four chronological chapters that are also thematic: "The Politics and Craft of Drawing," on her "architectonic" drawings produced in the 1970s; "Breaking New Ground at Columbia University and The Institute for Architecture and Urban Studies," two New York institutions where she taught and theorized; "Collaborations with Donald Judd," the famous artist she was professionally and personally involved with for about a decade; and "Mind/Body Dualism: The Watercolors," on the images she created from 1986 to the end of her life. Between the second and third chapters are nearly fifty color plates (see spreads, below) that are referenced in the chapters but unfortunately require some occasional back-and-forth flipping while reading the book.
The chapters of most interest to me are those on Columbia/IAUS and Judd. The former elucidates the housing studios she taught, with ideas firmly rooted in her Italian architectural education (esp. courtyard housing), collaborations with Richard Plunz and others at Columbia, and the ReVisions study group at IAUS, among other preoccupations in the late 1970s and early 1980s. The chapter on Judd, whom she was involved with from the late 70s to early 80s, attempts to "set the record straight," giving proper credit to Vinciarelli where accounts overshadowed or omitted her contributions entirely. These and the other chapters provide expansive biographical information, but they also excel in providing context, such as in the dearth of women in academia at the time and Columbia's efforts to remediate that by hiring Vinciarelli and other women, or in situating Judd and Vinciarelli alongside other professional/personal pairs, like Robert Venturi and Denise Scott Brown. Coming to the fore in the book is the collaborative nature of Vinciarelli's work, something not evident when looking solely at her beautiful watercolors.
SPREADS: 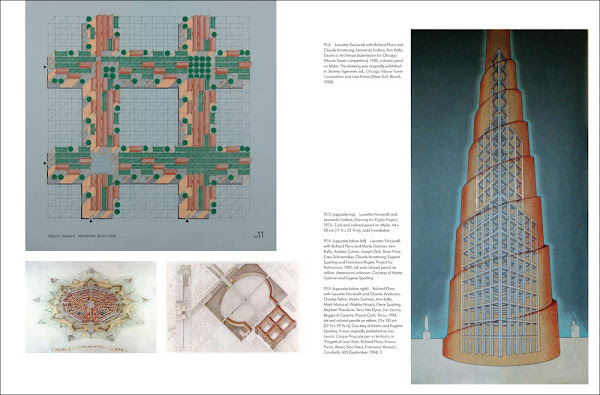 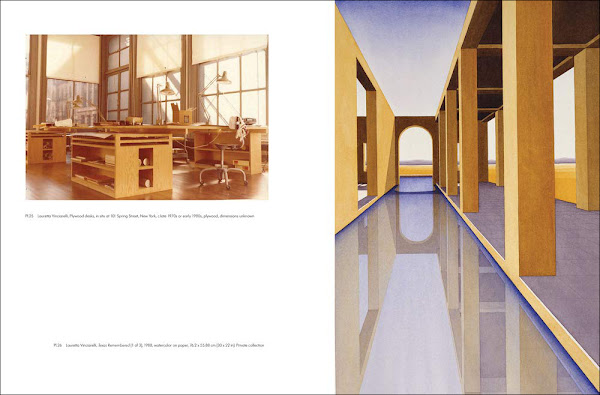 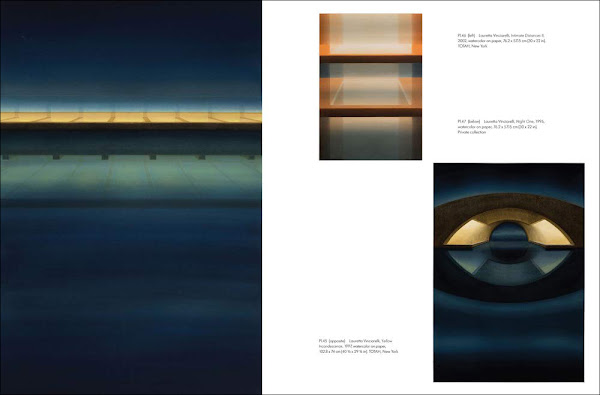