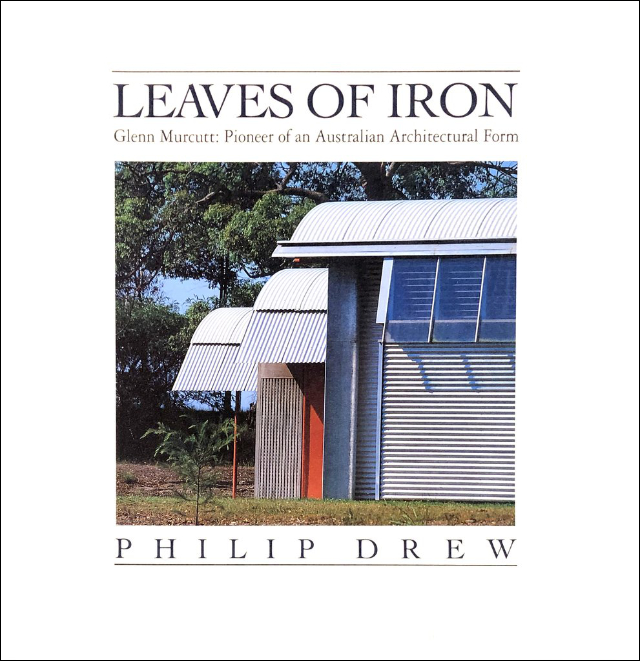 Leaves of Iron: Glenn Murcutt, Pioneer of an Australian Architectural Form
by Philip Drew
Angus&Robertson, 1991 (first published in Australia in 1985 by The Law Book Company Limited)

DESCRIPTION FROM BACK COVER:
For over 200 years, Australia has been searching for its identity. Often, this has led to the imposition of inappropriate European cultural values on a very different, very harsh, southern continent. In architecture, most of all, the manifest error of implanting old world styles in this new world landscape has led to a desperate need for an open, independent architecture.
That need is answered by Glenn Murcutt and his development of a strong and attractive, yet practical, architectural form. He has achieved this through a close scrutiny of, and a great sensitivity for, Australian landscape and climate.
In Leaves of Iron, Philip Drew has produced a work which, in its sensitivity and understanding of Australian cultural needs, matches that of the architect who is the subject of this book. A fascinating look at Murcutt's life and the influences that shaped him into the artist he is today, it is also a detailed examination of Murcutt's planned and built work and the importance of that work to Australian architecture and culture in general. Leaves of Iron is the study of one very significant Australian and, at the same time, of the culture in which he works.
Philip Drew was born in Coffs Harbour in 1943. He studied architecture at the University of New South Wales, and later obtained his Masters degree from the University of Sydney. [...] He is the author of Third Generation: The Changing Meaning of Architecture; Two Towers; The Architecture of Arata Isozaki; Frei Otto: Form and Structure and Tensile Architecture.
REFERRAL LINKS:

dDAB COMMENTARY:
On September 14, it was announced that Glenn Murcutt is the 2021 laureate of the Praemium Imperiale International Arts Award in the Architecture category, making him one of the few architects — 22, to be precise — that are recipients of both the Pritzker Architecture Prize, given out by Chicago's Pritzker family, and the Praemium Imperiale, awarded by the Japan Art Association. With both, especially the Praemium Imperiale, effectively serving as lifetime achievement awards, there are few surprises in the annually naming of honorees. Nevertheless, the announcements are a good excuse to take closer looks at the architects being honored, particularly at their early years, which are obviously important but may be forgotten in our digital age that obsesses about the present rather than the past.
In the case of Glenn Murcutt, that means taking a look at Leaves of Iron, the 1985 biography and monograph by Philip Drew that is considered a classic and arguably paved the way for an international appreciation of the architect that led to his Pritzker Prize win in 2002. I was familiar with the book in undergraduate architecture, which I attended in the first half of the 1990s, because some of my professors were fans of Murcutt's work and recommended it; the book's reprinting in 1991 most likely gave the book a wider distribution that led to its availability in the middle of Kansas. As I've mentioned on this blog before, though, my tastes in those years veered toward Deconstruction, so I didn't pay attention to Murcutt's work at the time or take more than a shallow dive into Drew's in-depth book.
Recently I managed to pick up Leaves of Iron for a reasonable price — considerably less than the prohibitively expensive asking prices for the first-edition hardcover and paperback reprint on Amazon —  and my first impression when flipping through the book is how thorough it is. The depth of Drew's writing on Murcutt's life and architecture is exceptional, particularly for an architect not yet fifty years old; the American equivalent would have been a biography on Frank Gehry in 1978, the year he completed his own house but decades before Bilbao and other notable buildings — and 37 years before Paul Goldberger's biography on him was actually published. Drew, in other words, had some foresight with the decision to write a voluminous book on a single architect, one that would frame Murcutt as an architect "pioneering" a truly Australian architecture and define the way others viewed his architecture, including the Pritzker Prize jury.
The thoroughness of Drew's book, based on nearly thirty hours of interviews transcribed onto 562 pages (!) per the bibliography, is typical for a biography but excessive for a monograph, of which the book also resembles. The book essentially intertwines a biography on the man and a monograph on his buildings with Drew's occasional critical flourishes that situate Murcutt within the lineage of other great architects around the world and philosophical approaches to situating man within nature. Murcutt's childhood in New Guinea is important in regards to the last, and the linear houses that became his signature can in many ways be traced to the traditional long houses in New Guinea that were lifted upon stilts and accompanied by "the steady reassuring drum beat of rain on the iron roof."
Although the monographic component of Leaves of Iron is not as thorough or beautiful as Haig Beck and Jackie Cooper's later Glenn Murcutt: A Singular Architectural Practice, Drew presents the houses (most are houses) critically so they fit into the narrative while also conveying the architectural qualities of each design and the way Murcutt fit them into their respective sites. A chronological list of executed works and selected projects from 1969 to 1984 is part of the back matter, surprisingly acting as a gazetteer, complete with addresses for private commissions (I don't see that happening at all today). This means it's possible to locate some of his now iconic houses from those years and take solace in the fact that many of Murcutt's pioneering buildings still stand four or more decades later.
SPREADS: 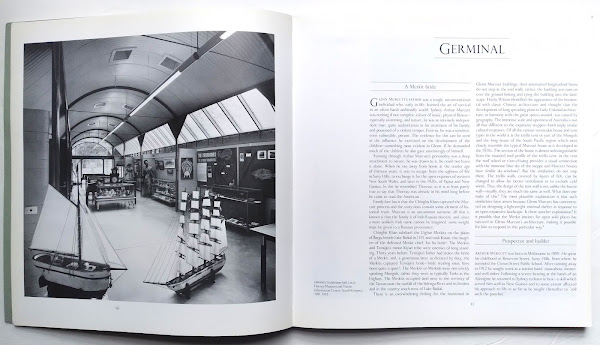 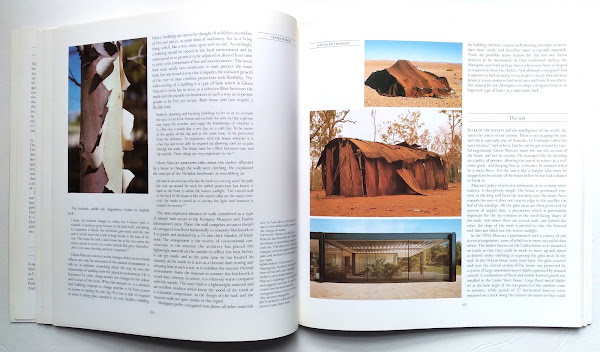 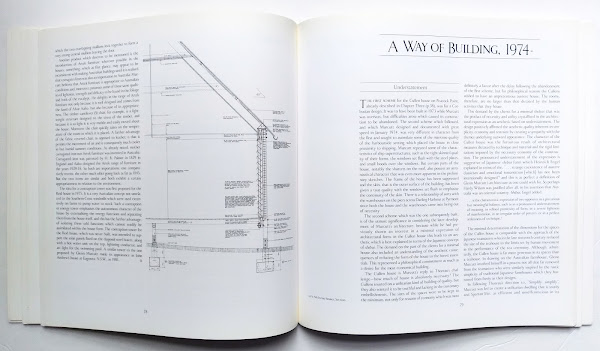 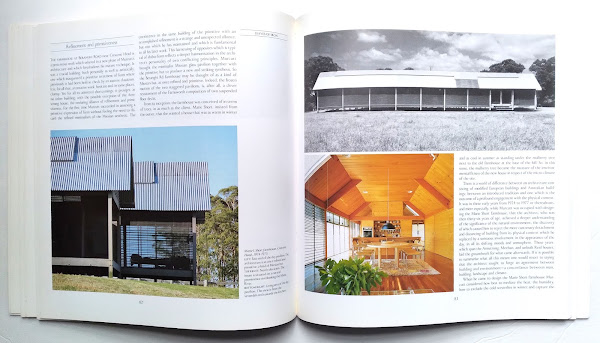 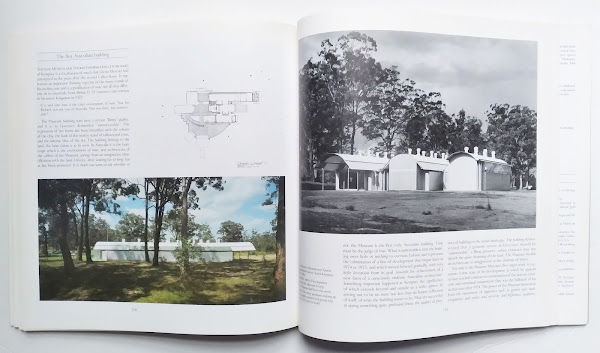