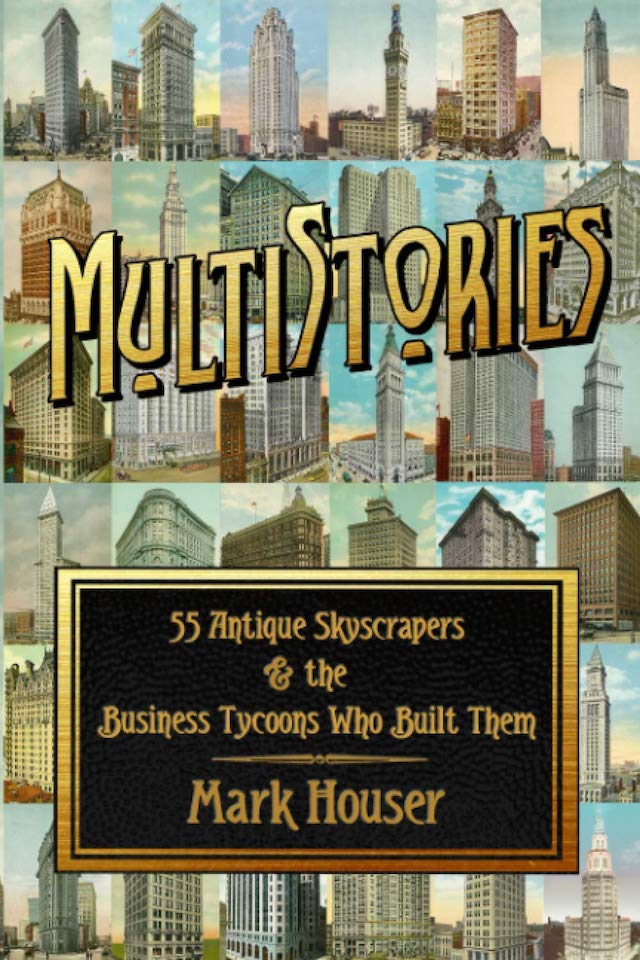 PUBLISHER'S DESCRIPTION:
Skyscrapers are an American original. More than 100 years ago, towering marvels like New York's Flatiron Building thrilled the public and transformed cities across the country. Now take a tour of the best of these elegant landmarks still standing today in 31 U.S. and 5 international cities.
Packed with colorful tales of the powerful executives and self-made millionaires who commissioned the country's first skyscrapers, MultiStories also traces the emergence of modern corporations in banking, media, transportation, insurance, manufacturing, entertainment, and other industries that fed the explosive growth of American cities at the start of the 20th century. Learn the surprising and inspiring stories of Gilded Age rags-to-riches risk-takers who invested in these so-called "machines that make the land pay" — soaring structures that proclaimed their owners’ influence and remain as legacies of a fascinating, forgotten past.
Award-winning writer and speaker Mark Houser weaves extensive research with observations gleaned touring these ostentatious old high-rises — many now updated as luxury condos or boutique hotels. Entertaining and informative case studies and historic sketches of each building are illustrated with century-old postcards from a time when these antique skyscrapers were dazzling new tourist attractions.
Mark Houser​ is a public speaker, writer, and tour guide who shares stories of America's first skyscrapers and the explosion of raw economic power, new technology, and societal disruption their builders unleashed on the world.
REFERRAL LINKS:

dDAB COMMENTARY:
As an architectural writer — or more accurately, a non-practicing architect who writes about architecture — most of the times I write about specific buildings I always include the name of the architect(s)/firm(s) but infrequently include the names of other important players, be they engineers, builders, or clients. The last is arguably the most important entity in any work of architecture, since a client enables a building to come to fruition: paying for it construction, hiring the architect, and investing some faith that the architect's design is worth what is usually an added expense over the norm. More than just naming names often omitted, a focus on clients shifts the narrative of a building completely, from one about its siting, form, spaces, materials, and other architectural qualities, to one about money, power, ambition, social circles, and other means of turning money into a building.
Mark Houser's MultiStories, which had its first iteration as a monthly column in Pittsburgh Magazine, is a bit like my book How to Build a Skyscraper flipped on its head. Sure, my book mentions the clients — developers, typically — responsible for many notable skyscrapers around the world, but its focus is on design and engineering. Houser never fails to mention the architects behind the "55 antique skyscrapers" (they span from 1889 to 1928), but his brief historical accounts are more interested in the clients, the "business tycoons who built them." Given the time frame, and an explicit restriction for skyscrapers "decorated in a pre-modern style," all of the clients are long gone, which makes reading their untold stories — untold in architectural circles, at least — all the more surprising and refreshing. Some of the towers have famous clients (Woolworth Building) or clients strongly connected to them (the Flatiron, née Fuller Building), but many of the clients' stories appear to be either lost to history or overshadowed by the buildings themselves.
The 55 stories are arranged in six chapters, with 50 of them suitably located in the United States, where most of the skyscrapers in the late-19th and early-20th centuries were built, with Chicago and New York garnering the most attention for their density of towers. Logically, Houser starts with a chapter on those two cities, presenting four buildings in each. Four regional chapters follow (Northeast, Midwest, South, West), before a concluding "International" chapter with five buildings outside the United States. While I was already familiar with most of the towers in the "New York and Chicago" chapter, I couldn't boast the same for the rest of the book; How to Build a Skyscraper forced me to learn about Terminal Tower in Cleveland, but I had very little knowledge of tall buildings outside of New York and Chicago before flipping through MultiStories, minus Louis Sullivan's famous pair of buildings in St. Louis and Buffalo. I'm probably not the only architect coming into this book with such a deficiency and therefore not the only one finding something to like.
A few examples should give a flavor of the book, which features Houser's short stories accompanied by one image per building, usually an old postcard from his collection. Both the Monadnock Building and Reliance Building are famous Chicago skyscrapers, the former for its load-bearing brick walls and the latter as an example of the Chicago School, with its steel frame, terra cotta exterior, and large windows. Architects know that both were designed by Burnham and Root (the Reliance was eventually converted into the Hotel Burnham, so named for Daniel Burnham, but it now has the absurd, extra-long name "Staypineapple, An Iconic Hotel, The Loop"), but reading about their clients was news to me: Owen Aldis and brothers Peter and Shepherd Brooks, who hated decoration and logically ended up with the pared-down Monadnock; and William Hale, an elevator manufacturer turned real estate developer who died four years after the building's completion. In "The Midwest" chapter is Sullivan's Wainwright Building, which was built for Catherine Wainwright, one of the few women in the book and an obvious expression of the few female clients at the time. She was Adler and Sullivan's client with her brother, Ellis, who was implicated in a bribery scandal involving beer and trolley lines. It's a very St. Louis story but one that makes me think perhaps maybe women make better, less scandalous clients than men — a lesson for future "business tycoons" erecting skyscrapers.
Email Post
Labels: history-theory thursday