The Ecologies of the Building Envelope 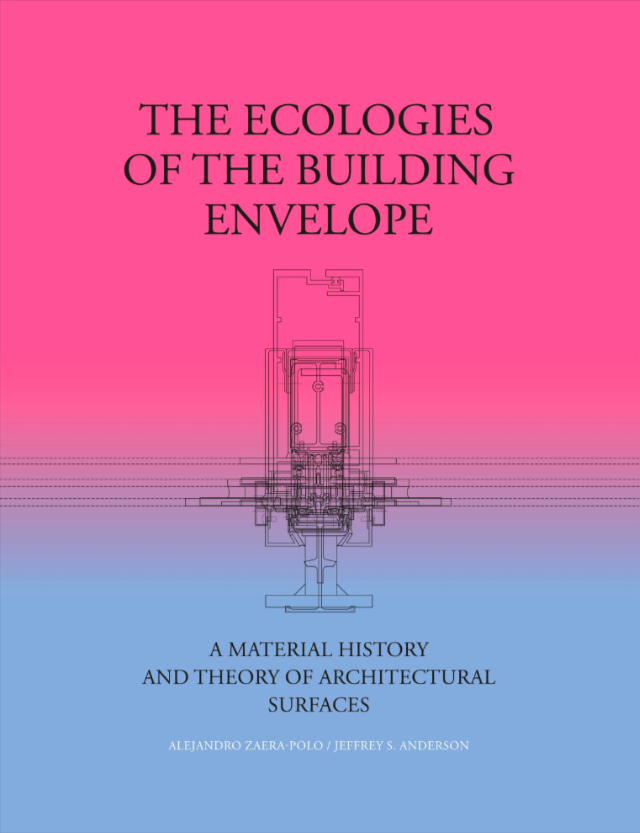 The Ecologies of the Building Envelope: A Material History and Theory of Architectural Surfaces
by Alejandro Zaera-Polo and Jeffrey S. Anderson
Actar Publishers, July 2021

PUBLISHER'S DESCRIPTION:
While the façade is one of the most thoroughly theorized elements of architecture, it is also one of the most questioned since the end of the 19th century. Within the discipline of architecture, the traditional understanding of the façade focuses primarily on semiotic and compositional operations (such as proportional laws and linguistic codes), which are deployed on the building’s surface. In contrast to this, our material and environmental theory of the envelope proposes that the exponential development of building technologies since the mid-19th century, coupled with new techniques of management and regulation, have diminished the compositional and ornamental capacities of the envelope in favor of material, quantitative, and technical performances. Rather than producing a stylistic analysis of the façade, we investigate the historical lineages of the performances, components, assembly types, and material entanglements that constitute the contemporary building envelope.
Alejandro Zaera-Polo is an award-winning architect and a tenured professor at Princeton University. His career has consistently merged the practice of architecture with continued theoretical and academic engagement. Jeffrey S. Anderson is a design technologist and architectural designer specializing in custom AR/VR experiences and interactive technologies. He currently teaches in the Graduate Architecture and Urban Design program at Pratt Institute and runs the Design Lab at Mancini Duffy in New York.
REFERRAL LINKS:

dDAB COMMENTARY:
The 2014 Venice Architecture Biennale, curated by Rem Koolhaas under the larger theme of Fundamentals, was broken down into three sections: Absorbing Modernity 1914-2014, Monditalia, and Elements of Architecture. The last, housed in the Central Pavilion in the Giardini, was the most controversial, since many visitors — architects, mainly — found the fifteen elements of the title (floor, ceiling, roof, etc.) to be basic, out of touch with how contemporary architects design and build. Is architecture merely the arrangement of toilets and other elements, and is the technological evolution of those products over time more important in architecture than the skills of architects? However one answers such questions, the most overtly architectural element of the fifteen was "façades," handled by Alejandro Zaera-Polo and Stephan Trüby with Koolhaas and others whose efforts spanned multiple elements. Instead of displays of manufacturer standard components, as with the "escalator," the room devoted to façades featured mock-ups of bespoke exteriors, such as Herzog & de Meuron's Prada store in Tokyo.
This Biennale contribution by Zaera-Polo was not without its own controversy. In October 2014, just two years after he took over as Dean of Princeton School of Architecture, Zaera-Polo resigned from the post "amid rumors that his texts, prepared for the Façade section of the Elements of Architecture exhibition at the biennale and the accompanying catalog, contained plagiarized material." Turns out the fifteen Elements of Architecture books published by Marsilio to coincide with the opening of the Biennale (I actually bought just one of them, Façade, when I was at the Biennale vernissage) omitted any citations, something Princeton University apparently did not appreciate. Koolhaas defended Zaera-Polo, describing the catalog "as a polemic, not an academic document." The longest section of the Façade book, done by Zaera-Polo, Jeffrey S. Anderson, and others and titled "Façades After the Façade," even has a disclaimer: "This is not an academic paper, but a historical speculation, a technological fiction not suitable as an exhaustive source..."
Letters from Koolhaas and Zaera-Polo, serving in part to clarify the latter's departure from Princeton, mentioned that Taschen's repackaging of the catalog "will meet all the academic standards in terms of acknowledgement of sources and otherwise. All sources of the text would be fully acknowledged in the final version." I have that later "final version" from 2018, so I know for a fact that the sources are not there. A new section has Wolfgan Tillmans' Book for Architects, photos of the exhibition in the Central Pavilion, and some additional texts, but the Taschen version is basically just a bigger, single-volume version of the Marsilio catalog(s).
Normally I like to give a little preface to book commentaries on this blog, situating the books within some sort of context, personal or otherwise. But the lengthy explication above is needed to state that The Ecologies of the Building Envelope basically delivers the Elements of Architecture text with citations, as promised by Zaera-Polo back in 2014 but not provided by Taschen a few years later. When I compared some pages from the new book with related pages from the catalog, posting them to Instagram and Twitter, I discovered a text that was basically unchanged in the new book but now has the addition of citations — clear, right there on the page rather than in the back of the book. This isn't to say that the whole of The Ecologies of the Building Envelope is lifted from the earlier catalog verbatim, with no new materials; certain parts of the new book, it appears, expand upon the material provided for the Biennale exhibition. This expansion comes mainly in the form of the text. The Elements catalog is saturated with images and other graphic treatments courtesy of Irma Boom, though Ecologies is more interested in tracing a narrative history of facade technologies in words, occasionally punctuated by images drawn from the exhibition, which, it should be noted, were drawn from the research of Anderson and Zaera-Polo.
Ecologies is organized into four chapters: "Environmental Performances: The Teleology of the Envelope," "Components: Microevolutions of the Envelope," "Assembly Logics: The Tectonics of the Modern Envelope," and "Assemblages: The Speciation of the Envelope." Each chapter is further broken down into more specific performances, components, assemblies, and assemblages, such as those shown in the spreads below for the fourth chapter. An index (oddly called a glossary, for some reason), which is not found in the 2014 catalog, is provided here, helping to make the book a reference for students and architects interested in the evolution of facades. Most humorous are Zaera-Polo's short contributions at the beginning and end of the book: his dedication is strongly "against, in short, all forms of academic idiocy," (his emphasis) among other things, clearly targeted at those who made his efforts so difficult back in 2014; and in the acknowledgements at the back of the book he and Anderson thank Rem Koolhaas and James Westcott (catalog editor) "for giving us the idea that a building trade show is an ideal opportunity to think about the discipline." (my emphasis) I don't think the Biennale or Koolhaas would appreciate such a description, but you have to credit to Zaera-Polo for putting into words what many people were thinking at the time.
SPREADS: 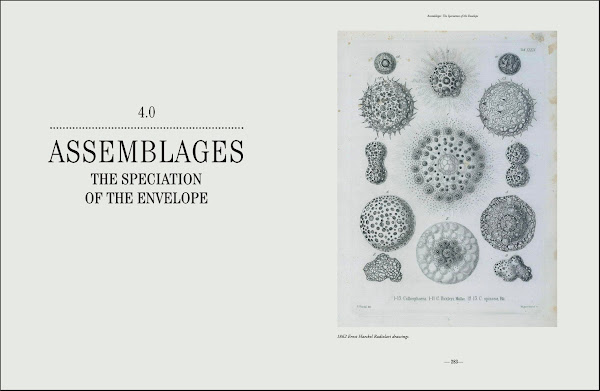 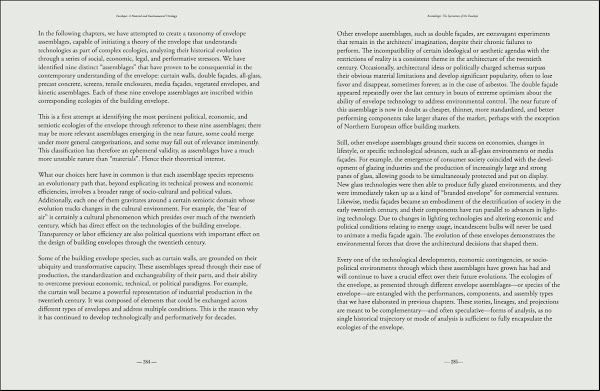 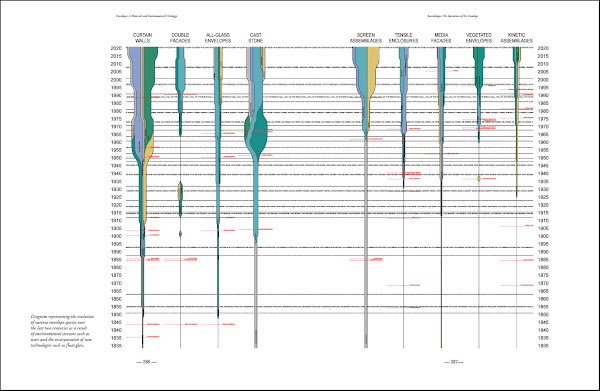 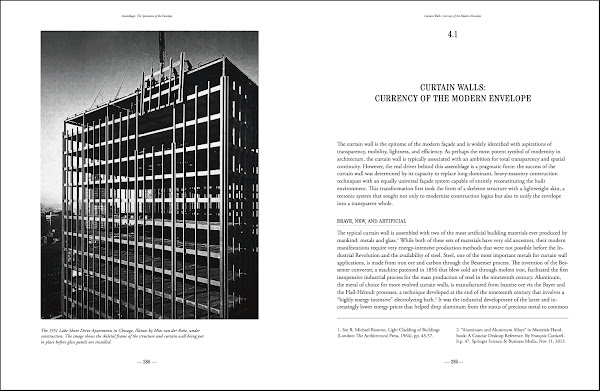 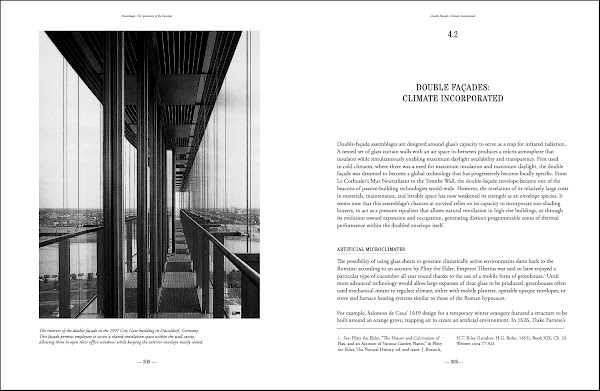 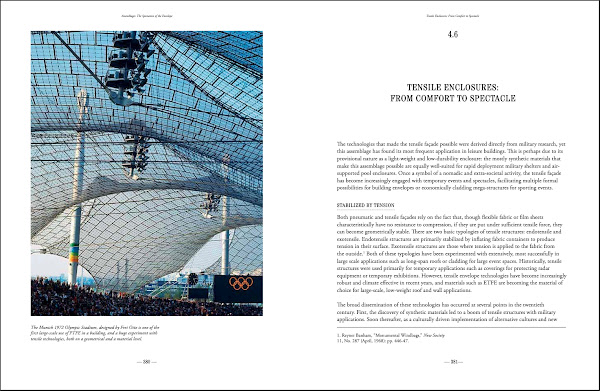 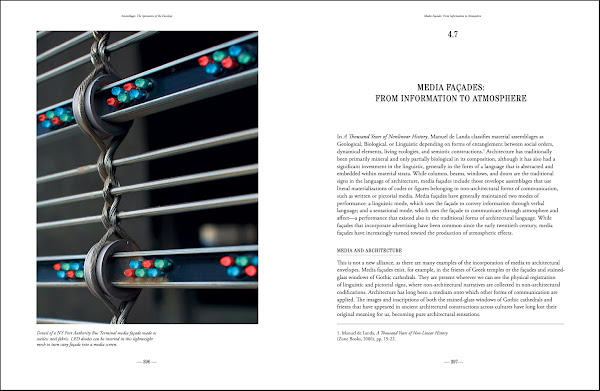